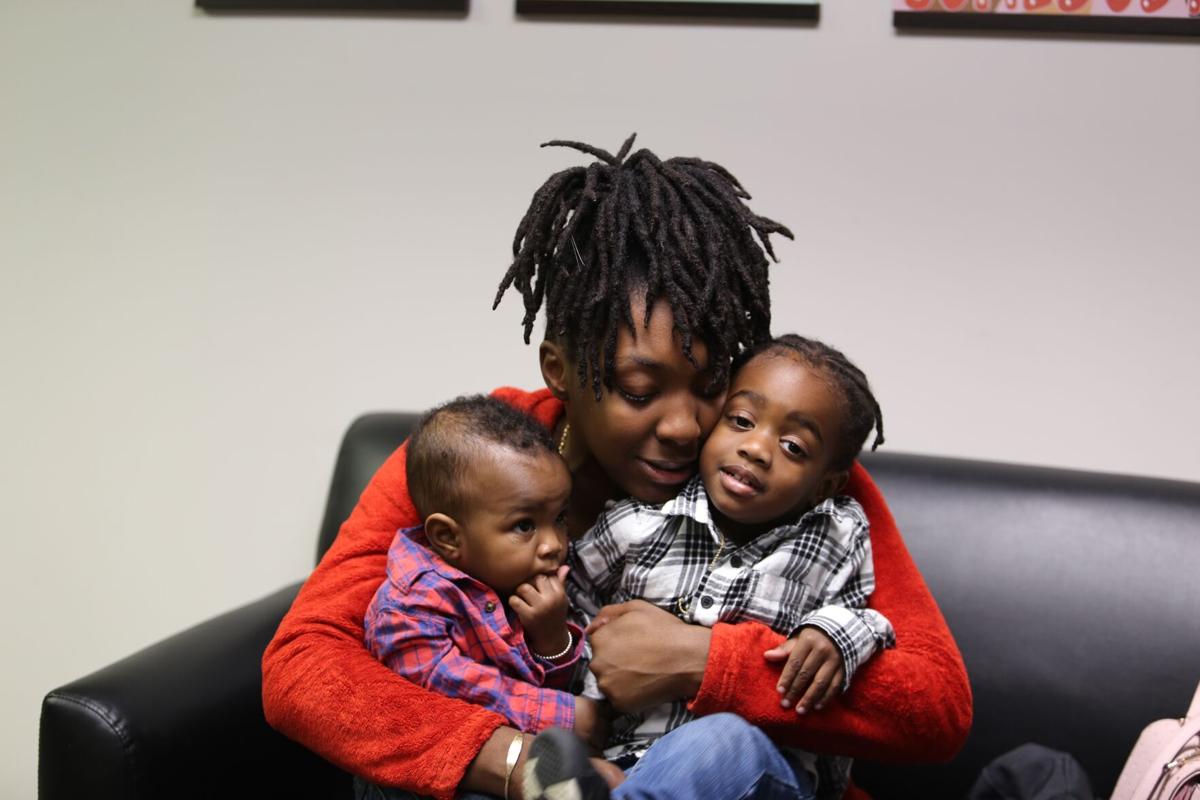 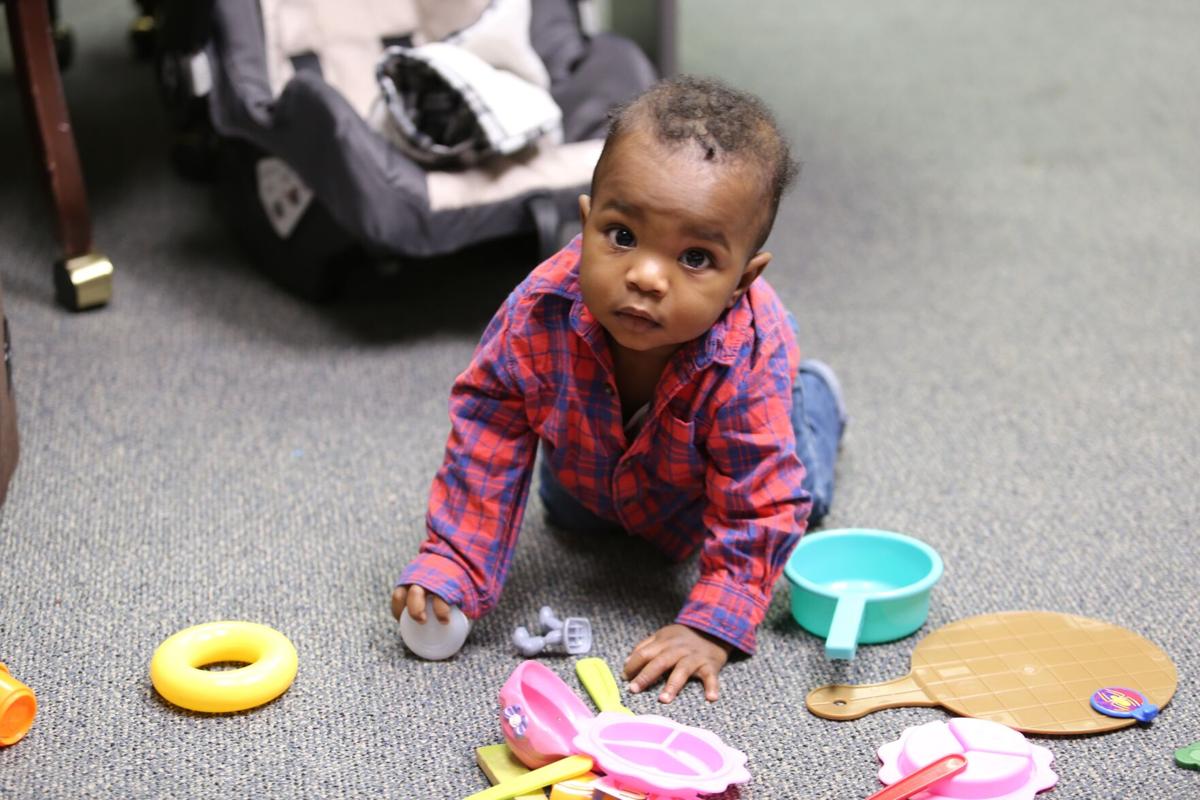 Cairo, a 9-month old, crawls through the office of New Hope Services in Jeffersonville. He is the son of Cadesia Victor, who has been working hard to provide for Cairo and his 2-year-old brother Jamal Jr. 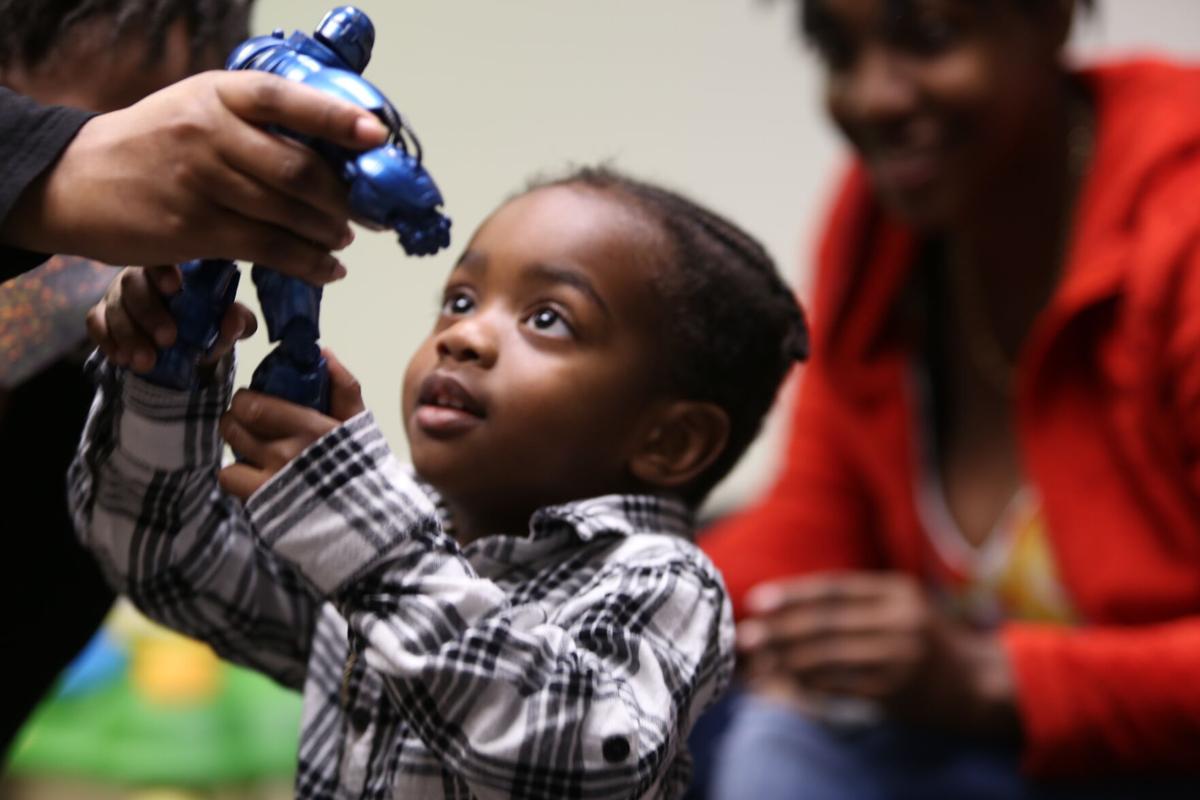 Jamal Jr., 2, reaches for a toy as his mother, Cadesia Victor, watches. She describes the toddler as a “ball of energy.” 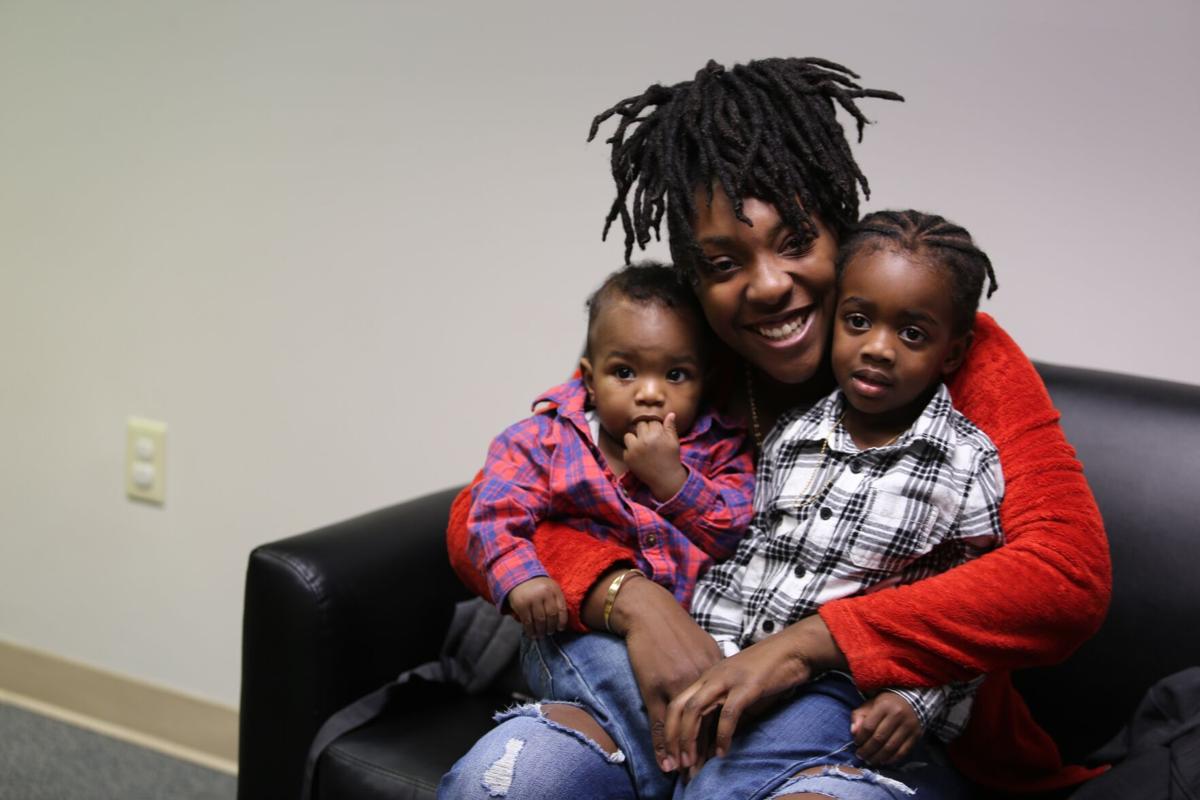 Cadesia Victor has faced many challenges while raising 9-month-old Cairo and 2-year-old Jamal Jr. as a single mother, but she strives to maintain a positive attitude as she works to provide for the two children. 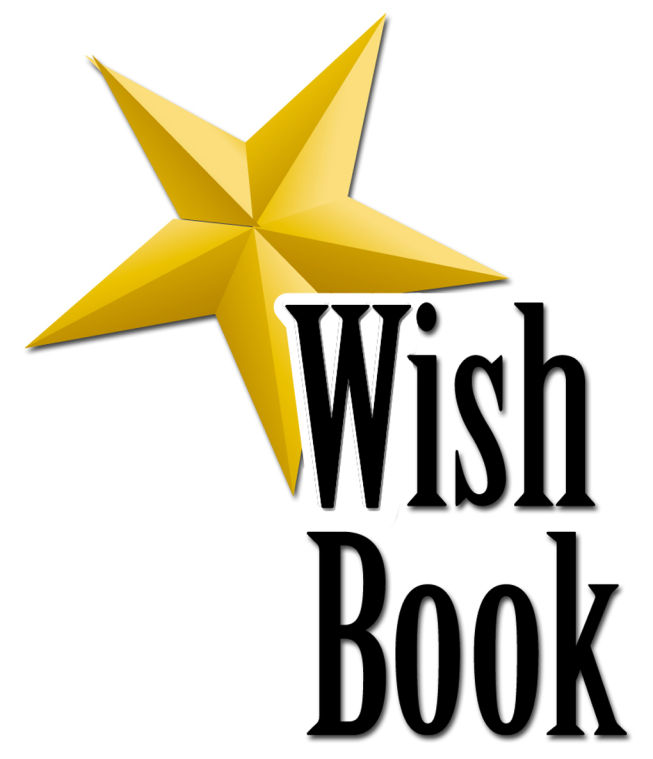 Cairo, a 9-month old, crawls through the office of New Hope Services in Jeffersonville. He is the son of Cadesia Victor, who has been working hard to provide for Cairo and his 2-year-old brother Jamal Jr.

Jamal Jr., 2, reaches for a toy as his mother, Cadesia Victor, watches. She describes the toddler as a “ball of energy.”

Cadesia Victor has faced many challenges while raising 9-month-old Cairo and 2-year-old Jamal Jr. as a single mother, but she strives to maintain a positive attitude as she works to provide for the two children.

JEFFERSONVILLE — For Jeffersonville resident Cadesia Victor, her two young children are her top priority, and as she works to provide for her family, she has often made personal sacrifices to make sure they have what they need.

Cadesia, 27, is the single mother of 2-year-old Jamal Jr. and 9-month-old Cairo. She has stayed extremely busy over the past year between her job and caring for her children, but even as she faces challenges, she tries to remain positive.

“It’s been a year — I’ve cried so much,” Cadesia said. “But all the time, I was just telling myself that my kids are happy and I have a job and I have a place to stay.”

As a single mother of two young kids, it’s been a tough year. When the COVID-19 pandemic hit, she was out of work for a while, and she has taken on many responsibilities with limited support.

The father of her kids stopped helping out, she said, and while seven months pregnant with Cairo, she starting working for a couple of months at Walmart in addition to her restaurant job.

During these times, she was on her feet constantly, causing her feet to swell and her back to hurt, she said.

“I always made sure I would get up and make us breakfast every morning regardless of how I was feeling, and then I’d have to turn around when I got off work to fix dinner,” she said. “It was a lot.”

Cadesia currently is a chef at a restaurant on Frankfort Avenue, but she is preparing to start a new job in the kitchen of a new restaurant in Germantown.

After months of struggling to find an affordable apartment, she finally found a place before Thanksgiving, and she is still in the process of moving from her mother’s home to the new apartment.

At times, she has missed days of work because she hasn’t been able to find someone to care for her kids. Since she often works evening shifts, it is difficult to find day care, she said.

But her new job will be more of a 9-to-5, and the new schedule will help her find day care options for her kids, she said. She still plans to work weekend shifts at the other restaurant, but she will not be working night shifts.

Cadesia feels “blessed” as she prepares to move into her apartment and start her new job, she said.

“It’s like you have a job, you have a car, and you finally have a place for them to go, and then you have another job that’s going to help you out,” she said.

Cadesia said both Cairo and Jamal Jr. are her “rainbow” babies, since Jamal Jr. was born after she had a miscarriage.

“After I had Jamal, I got pregnant, and he was 10 months,” she said. Neither one of them was planned. Cairo definitely came as a surprise.”

Jamal Jr. is a “ball of energy,” she said. He enjoys shows and films such as “Cocomelon” and “Spider-Man.”

“I’m very proud — he can tell me his name, his age, he knows his ABCs — we’re working on it, and numbers are next,” Cadesia said. “And colors — he’s slowly getting there as well.”

Cairo is the quiet one, Cadesia said.

“He cries when he’s hungry and that’s it,” she said. “And you’d think he could eat everything in the world. Of course, he’s not walking yet, and I’m still trying to teach him how to walk. He can stand up and stuff.”

“He likes to crack the eggs,” she said. “We have a stepladder, so he’ll get the little stepladder, and he’ll be like ‘Mommy, cook,’ and be scrambling the eggs. When we were in the other apartment and we were there by myself, he’d always come in the kitchen and try to help cook.”

Cadesia said she often doesn’t celebrate much around the holidays, and this year’s celebration will be mainly for her young kids. This will be Cairo’s first Christmas, and she has already put up the Christmas tree.

This holiday season, some of the family’s needs include furniture and other household items.

“There’s someone else out there who probably has it worse than you, so I just want them to learn that regardless of anything, we are blessed at all times, because we could have been in that same situation and not had anything,” Cadesia said.

Cadesia said she knows that as a mother, there are certain sacrifices she has to make in her life, and she doesn’t get much time just to herself. Life is hectic as she cares for the two children, and her goal is to have more balance in her life, she said.

“I know it’s about them right now, and I’m OK putting myself on pause for right now, but when they go to sleep, I take a little bit of time to myself,” she said.

She looks forward to the opportunities of moving into a new home.

“With me moving into this apartment, I’m going to take the time to try and fix my credit up and everything, because I definitely want to get the boys a house,” Cadesia said. “I want them to have that big backyard they can go play in. That’s definitely my end goal.”

• Due to COVID-19, monetary donations are recommended. New Hope staff will shop online for gifts from the Wish Book lists to ensure the safety of staff and families.

• Checks can be mailed to New Hope at 1302 Wall St., Jeffersonville, 47130. Those wanting to donate with a credit card should go online to newhopeservices.org/donate.html and designate it as a Wish Book donation.

• Items from Wish Book lists still can be purchased and dropped off at New Hope, but due to virus safety measures, only new items still in original packaging will be accepted.

• For more information about Wish Book or the many family services provided by nonprofit New Hope, call 812-288-4304.