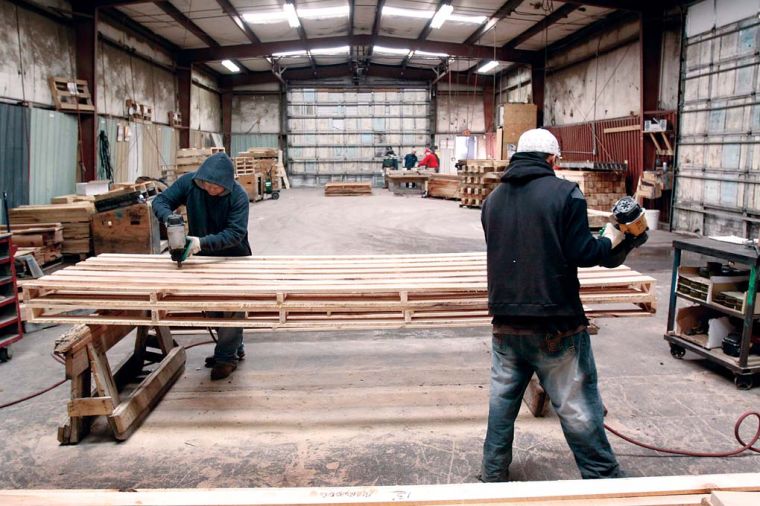 Esteban and Miguel Catarino assemble an oversized pallet inside a warehouse at Kentuckiana Wood Products recently in Jeffersonville. 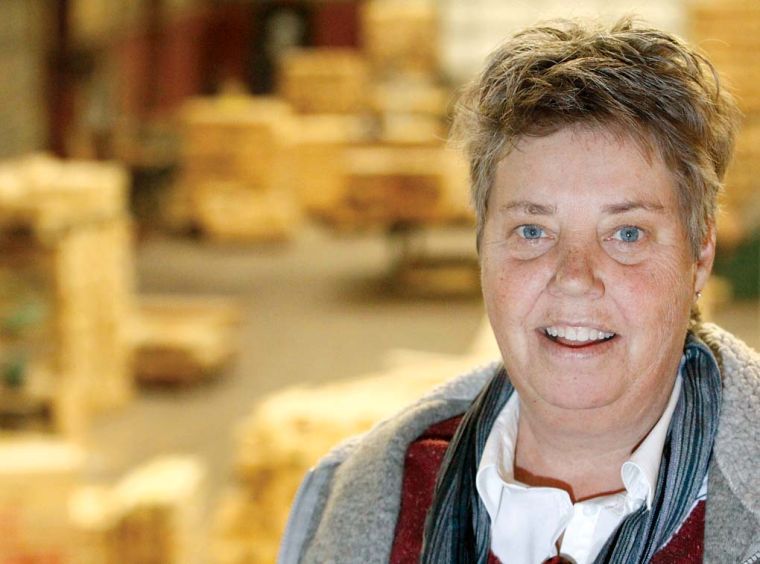 Connie Poole is the owner of Kentuckiana Wood Products in Jeffersonville. The company specializes in custom wooded pallets. 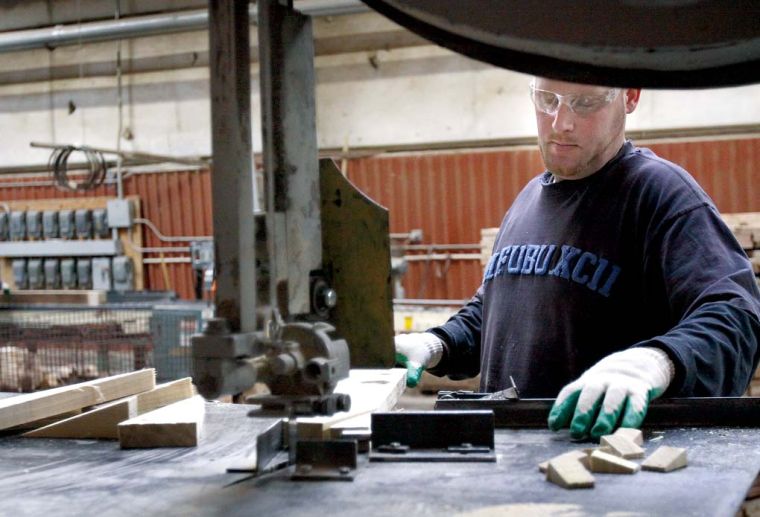 Esteban and Miguel Catarino assemble an oversized pallet inside a warehouse at Kentuckiana Wood Products recently in Jeffersonville.

Connie Poole is the owner of Kentuckiana Wood Products in Jeffersonville. The company specializes in custom wooded pallets.

A business that is hidden behind Jeffersonville’s quadrangle may be a bellwether in the recovery of the regional economy.

Kentuckiana Wood Products, a custom manufacturer of wood pallets used in shipping, is thriving despite being inexorably linked to the manufacturing industry. When the economy fell into the recession it was mired in for the past several years, the manufacturing sector was one of the hardest hit.

The businesses included in that description are among Kentuckiana Wood’s largest customers — like FireKing International, Challenger Lifts and Toyota Motor Co.

Kentuckiana Wood has not only survived downturn, but improved its profit margin and is continuing to recover.

“We are absolutely doing more than we were doing,” said Plant Manager Randy Jesse. “This would normally be the slow season, but ... it is exceptionally busy,” he added of a recent week.

The previous peak year for the company was 2006, when revenues were $3 million, said Connie Poole, president and chief executive officer. From year-to-year, the business saw a steadily increase in volume until the economic downturn hit.

While Kentuckiana Wood is still far from reaching its 2006 sales numbers — Poole said the company is going to be lucky to get to $2 million in revenue this year — profit margins have improved because of steps taken over the past four years. Kentuckiana Wood has weathered the economic downturn because it has streamlined its operations and cut costs, including freezing employee salaries.

“When we started in the downward trend, we said, ‘we’re not going to survive if we don’t figure out some ways to cut and get more efficient,’” Poole said.

And when the manufacturing sector began to slide, Kentuckiana Wood was prepared.

“We saw it six or seven months before it ever became big news,” Jesse said. “We concentrated really hard on just everywhere we could cut back without having to lay anybody off. We were conscious of that we didn’t want anybody to lose their job.”

Although the company lost employees through attrition, it was never forced to fire anyone.

In addition to losses because of attrition, the company cut spending considerably and cut hours for the remaining staff.

“We didn’t do anything extra; [we] were very lean for a couple of years,” Jesse said.

There was only one other year in which the company faced as difficult a situation, and it almost closed its doors for good.

A flood of problems

In 1997, the company was located across from the McAlpine Locks near the Colgate Plant in Clarksville and it was almost wiped out by flooding.

“We took a real beating in that flood,” Poole said. “At that point, we were trying to determine whether we should just close our doors because ... most of our inventory had floated down the river and our forklifts were under water. It looked like a hurricane had hit through there ... it was just horrendous.”

She offered up photos of the flood that effectively destroyed her business. The water had ruined the material in the lumber yard was buttressed by driftwood and covered in mud. There was even a foot of water that had inundated Poole’s office — which sat on the second story of the building.

A change in location — to the company’s current site — assistance from J and J Pallet and eventually a loan secured from MainSource Bank kept the company afloat.

“I couldn’t figure out anything else I wanted to do and I had people here ... there’s people’s livelihoods at stake,” Poole said. “We’ve had a couple hurdles, but we’ve pulled out of it.”

The company has survived a massive flood and a major economic downturn to post a good 2010.

“We probably did twice the business that we’re doing now in 2006, and we were virtually break-even [then],” Poole said. “All of the sudden, we’re making better profits than we ever have. I don’t think we’re doing anything we haven’t done before.”

The increased business also may be an indicator of a continued and improving economic recovery.

“I’m quoting stuff like crazy,” Poole said. “This industry, the pallet industry, is typically a good indicator of what’s going on in the economy.”

An increase in pallets being produced also is a strong indicator of how far along the local economy is in its recovery. More pallets ordered means companies are shipping more products.

“If the community does well ... [we’ll] be able to continue to grow,” Poole said.

She attributes the success of the company to good managers and as a result may upgrade equipment and is returning the benefits to employees.

“We’ve always said our Christmas bonuses are based on how well the company did and so [they had] their best Christmas ever this year,” Poole said.