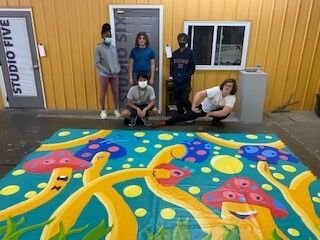 Students at Jeffersonville High School pose next to the backdrop they painted for the selfie stroll at this year’s Steamboat Nights. 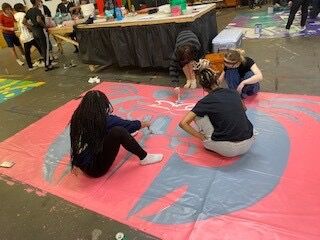 This year is the first year the event will have a selfie stroll. The manager of special events and Riverstage, Amber Powell, said the activity is a way to incorporate family memories and social media.

Students at Jeffersonville High School pose next to the backdrop they painted for the selfie stroll at this year’s Steamboat Nights.

This year is the first year the event will have a selfie stroll. The manager of special events and Riverstage, Amber Powell, said the activity is a way to incorporate family memories and social media.

JEFFERSONVILLE — A city classic, Steamboat Nights, will return to Big Four Station Park on Friday and Saturday, with a glow night including a silent disco, a balloon glimmer and other glow-in-the dark festivities.

Art will be featured at the event from the backdrops of the selfie stroll to the live chalk mural presentation. Students at Jeffersonville High School were charged with painting four backdrops that will be a part of a selfie stroll under the pavilion, a new activity added for this year.

“We’ll have professional photo booths there where people can take pictures with their family and their friends,” said Amber Powell, the manager of special events and Riverstage. “It’s a way to engage social media...and family memories into the event.”

Amanda Hoback, a local artist, will be creating a chalk mural live on the side stage both days of the event. Chalk will also be provided for children who want to create their own art alongside Hoback.

The event is officially called Shoe Sensation Steamboat Nights due to this year’s sponsor, and will take place after being cancelled last year because of the pandemic. COVID-19 precautions will be in place during the two-day festival, including the routine sanitizing of high-touch objects.

Typically the festival includes inflatables but to try to prevent close contact between guests, the activity was traded for Southeast Christian Moonlight Playground, which includes yard games like giant connect four, cornhole and a carousel.

Other activities that will be included are arm painting, instead of face painting to encourage social distancing, and make-and-take crafts provided by Maker13, a local non-profit workshop.

Masks are strongly encouraged at the event in the enclosed tent activities, meaning the silent disco and blacklight experience.

“We want to keep providing those experiences, especially for families to come out and have fun. It also helps build a good sense of community pride and gives an opportunity for...all kinds of people from Jeffersonville to interact with each other especially in the era of COVID when people are being cautious,” Powell said.

The concert series Jammin’ in Jeff will also be taking place on both days of the festival, starting with Nappy Roots performing at 9 p.m. on Friday while The Prince Project will perform at 8 p.m. on Saturday.

Steamboat Nights, previously Steamboat Days, has been around for decades, Mayor Mike Moore said, though the event took a hiatus of some years before Moore was elected.

“When I was running for mayor 10 years ago, the one thing I heard over and over and over from people was ‘please, bring back Steamboat Days,’” Moore said.

He said he felt it was important to do that.

“Jeffersonville always had the tradition of celebrating the Belle of Louisville and the steamboats that used to go down the Ohio, so it was something that tugged at my heartstrings and I wanted to bring back,” Moore said.

There will also be food vendors and a beer garden at the event. Any further information can be found at JeffParks.org.