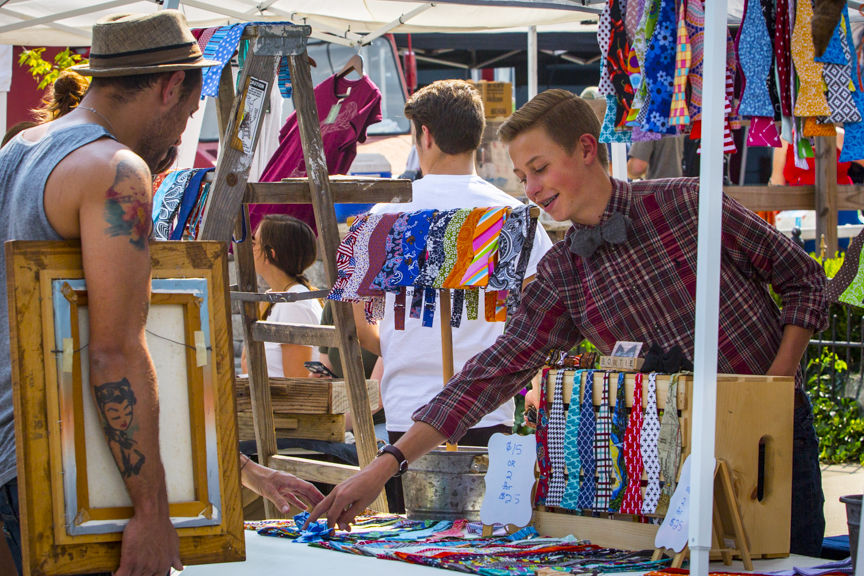 Ethan Thomas, 15, displays his handcrafted bow ties during the 5th annual New Albany Indie Fest. Thomas has founded his own business, designing and making each tie by hand. His business is appropriately called All Tied Up. 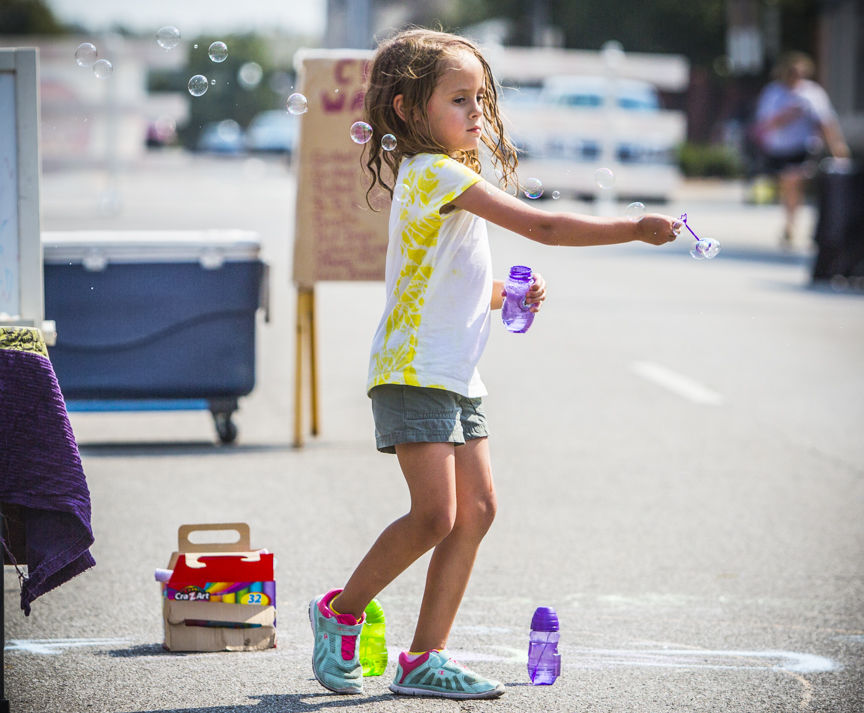 Devyn Meredith, 5, blows bubbles in between painting patrons hair with chalk during the 5th annual Indie Fest in New Albany. 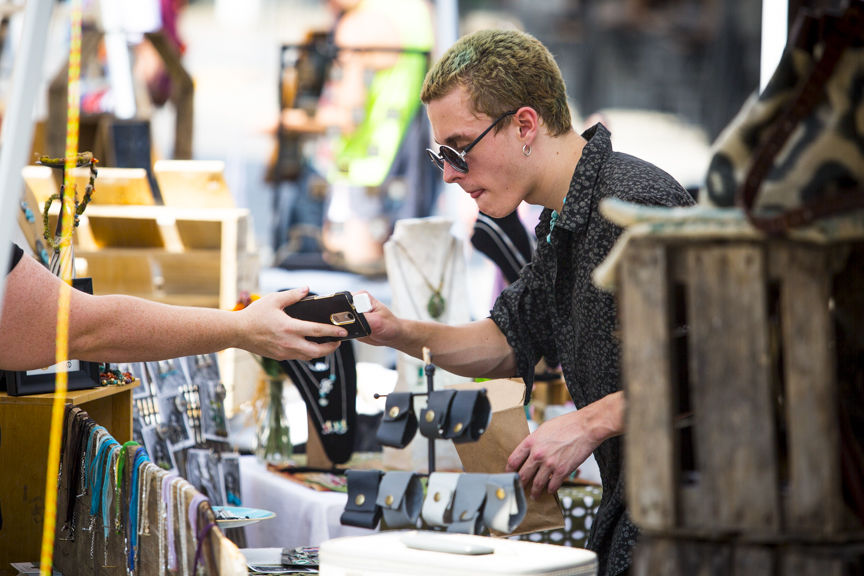 Jacob Sawyer swings by Crafty K, owned by Kristen Eversole, to purchase a handcrafted bracelet and earings during the 5th annual Indie Fest in New Albany. 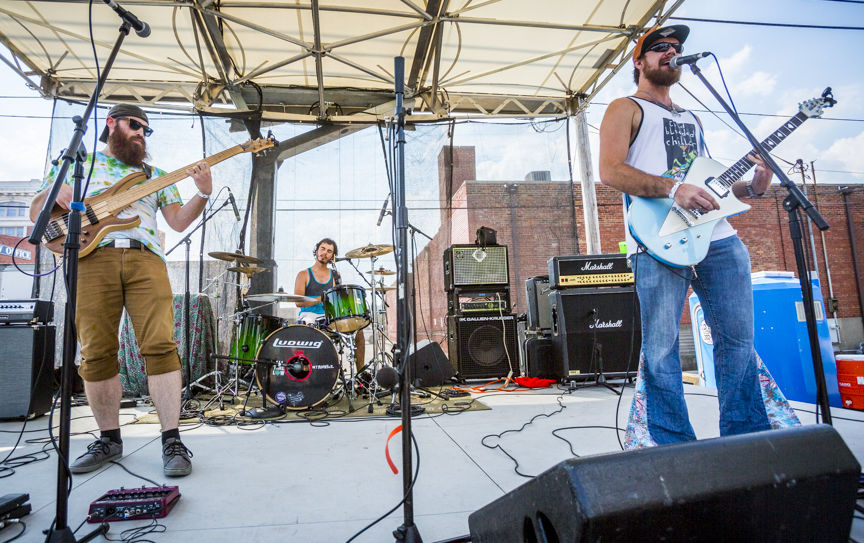 Ethan Thomas, 15, displays his handcrafted bow ties during the 5th annual New Albany Indie Fest. Thomas has founded his own business, designing and making each tie by hand. His business is appropriately called All Tied Up.

Devyn Meredith, 5, blows bubbles in between painting patrons hair with chalk during the 5th annual Indie Fest in New Albany.

Jacob Sawyer swings by Crafty K, owned by Kristen Eversole, to purchase a handcrafted bracelet and earings during the 5th annual Indie Fest in New Albany.

NEW ALBANY — When Indie Fest started in New Albany, the mission was clear — to celebrate New Albany and its local artists and entrepreneurs, and draw people into the city for more.

“We keep it small,” she said. “There's a reason why we keep it small because I want people to come and see what we have here and buy from our local artists but also say 'let's go see what's over on Market Street.'

“It's not just 'let's have a festival and get thousands of people on Bank Street.' It's 'let's have a little festival and encourage people to check out the independent businesses we have in downtown New Albany. That's the whole idea of Indie Fest.

More than 20 booths with local artisans and business owners lined the two blocks of Bank Street between Dragon King's Daughter and the New Albanian Brewing Co., where a dozen bands all across the musical board throughout the day. There were also booths with eats from Taco Steve, Chef Walker's BBQ and Steel City Pops.

The 18-year-old performed early in the afternoon, treating the crowd to her acoustic stylings and Dylan-influenced voice.

She said she's only played a handful of shows so far, but is working on doing some stuff with her brother. She said as a young person, she feels New Albany offers a welcome spot for artists. Her cover of “Rainy Day Women” is up on YouTube.

Kristen Eversole, owner at Crafty K Designs, was showcasing some of her wares Saturday — handmade earrings, lots of fused glass and wirework pieces.

Eversole has a degree in fine arts and works in health care. Several years ago, she embarked on this goal to get her small business off the ground and she said she's doing well.

“I wanted a way to kind of feed that need for art again,” she said.

She does the New Albany farmers market every Saturday, as well as four to five festivals a year.

She said the local business climate in new Albany has been building up rapidly over the past few years.

“I think we've had a lot of good vibes going on in downtown New Albany, lots of new businesses thriving, and lots of cool eclectic things popping up,” she said. “And it's nice; it makes me proud. We've really grown a lot in the last five years ... arts, food, other businesses, it just seems like we've got a good pulse right now. We've got a niche and we're getting it right.”

Ten-year-old Gretchen Sprecher was really excited about a silver locket she bought at the booth Vortex Paradox — it sells handmade and vintage items as well as photography and other neat things that aren't found in a typical store.

Her mother, Kirsten Sprecher, said as a longtime New Albany resident, she appreciates that the local scene is growing and wants to support it.

“I think it's changed,” she said, of New Albany. “There is a lot more stuff happening ... lots of great restaurants, there's more to do, you don't always have to go to Louisville for everything.”

Jeremiah McClellan visited the festival from Louisville, with his friend Joanna Lyninger, New Albany. McClelan said he loves the vibes from New Albany

“It's a totally different scene,” he said. “It's more homey, more inviting; I like it. It's like being in a whole different area. Louisville is so congested, so mean, so 'business-y.' Over here, you come over, everybody's hanging out having fun.”

Wisman Bennett said as far as the future of Indie Fest, she's not certain on the direction they'll head but she does hope to keep it about the same size. It really comes down to what the local businesses need in the community.

Laverne Beyl, 82, entered eternal life on Sunday, May 31, 2020 at U of L Hospital. She was a Homemaker, member of the Sellersburg United Methodist Church and Northside Christian Church. Lavern was preceded in death by her husband, Larry Beyl, Sr. and a sister, Erma. Surviving are her four so…