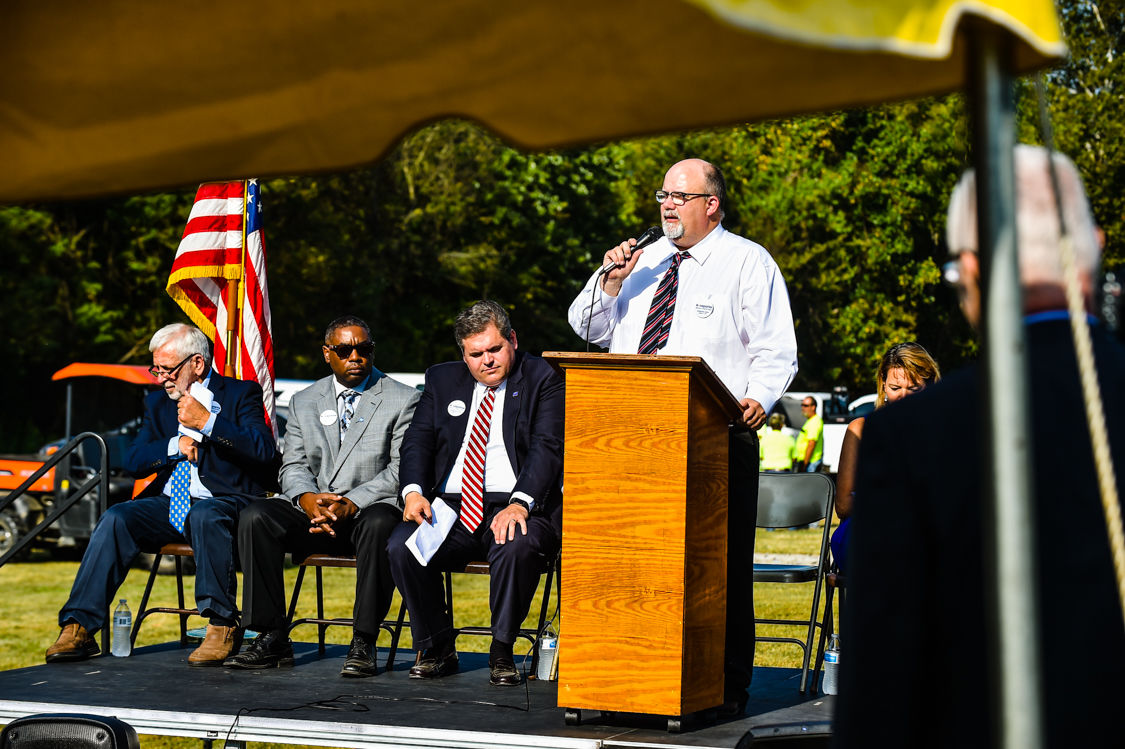 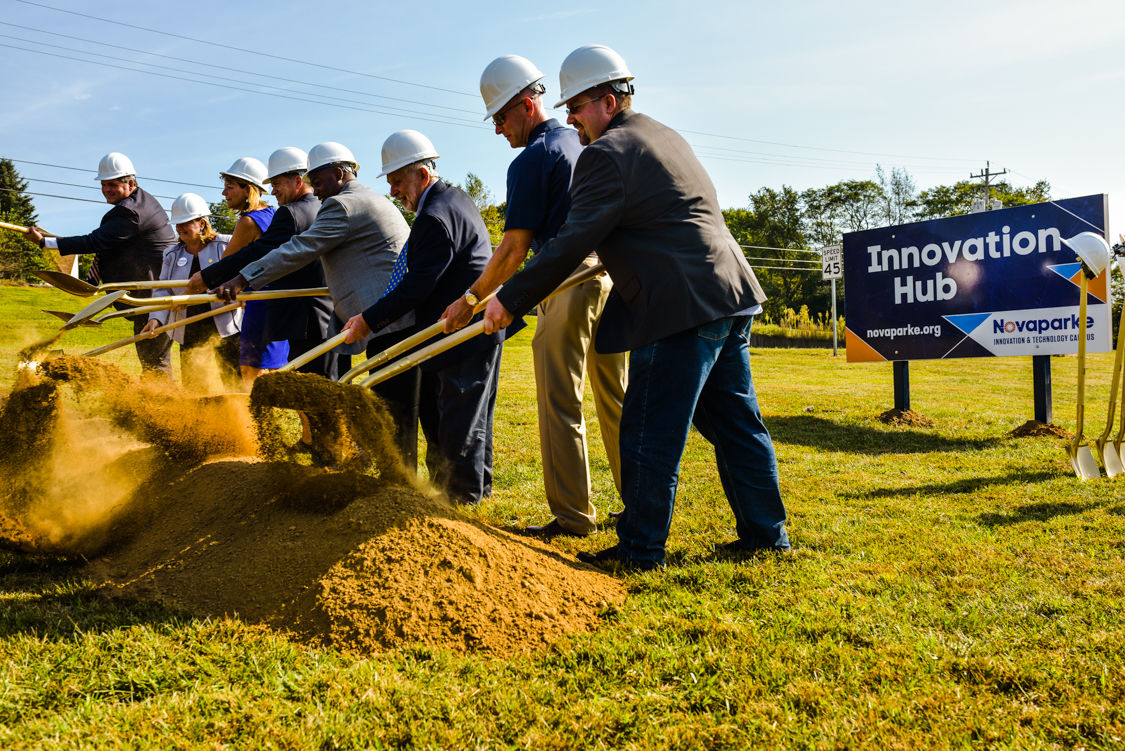 Floyd County government officials and developers sling shovels of dirt as they break ground for the future site of Novaparke Innovation & Technology Campus in Georgetown. The project is expected to be completed by late next year. 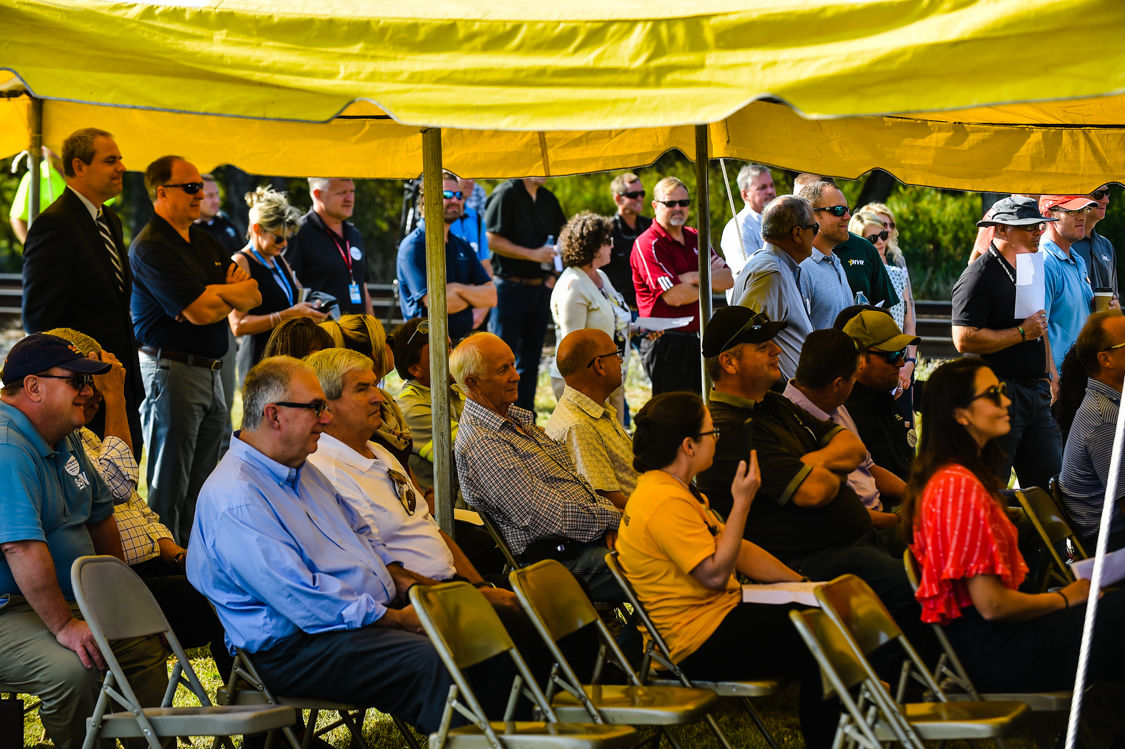 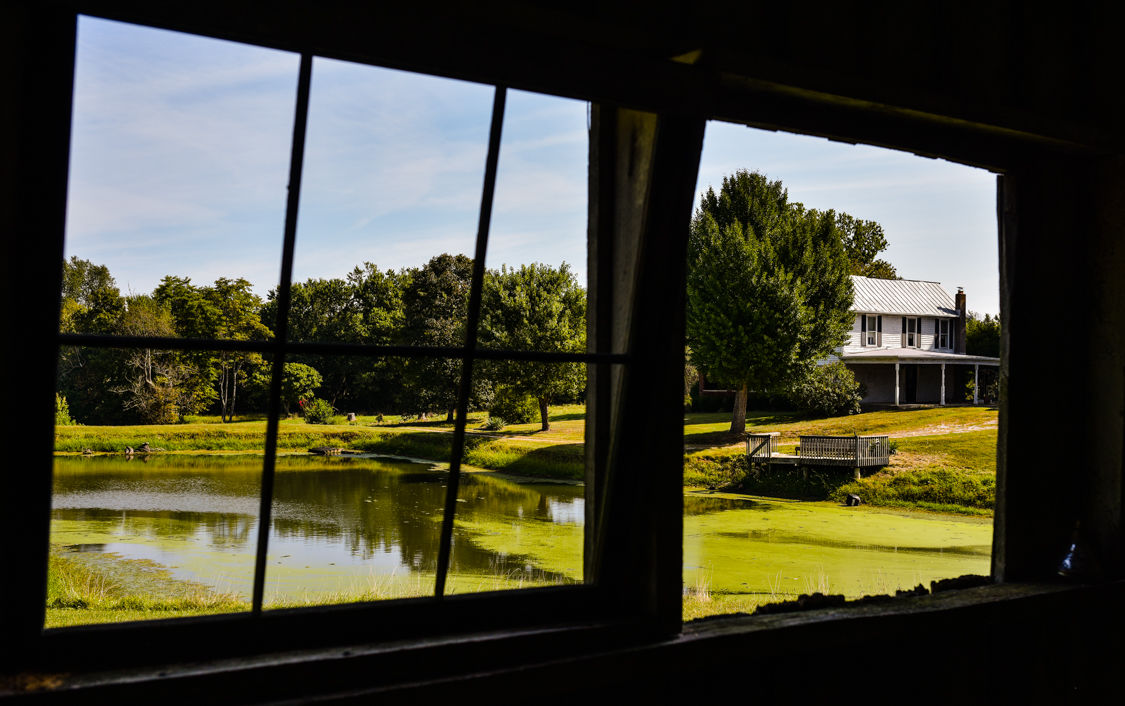 The historic farmhouse and surrounding barns and pond will be preserved and utilized in the developments entry, with the home to be used as a business incubator for Novaparke.

Floyd County government officials and developers sling shovels of dirt as they break ground for the future site of Novaparke Innovation & Technology Campus in Georgetown. The project is expected to be completed by late next year.

The historic farmhouse and surrounding barns and pond will be preserved and utilized in the developments entry, with the home to be used as a business incubator for Novaparke.

GEORGETOWN — Floyd County leaders gathered Tuesday to break ground on a project that's sure to change the face of Georgetown.

The event was held to mark the beginning of work on Novaparke Innovation & Technology Campus — a 60-acre business area that will bring 400 new jobs in the science, technology, engineering and mathematics [STEM] fields to Southern Indiana over the next decade.

“Now the hard work begins," said Don Lopp, director of county operations. "It’s exciting to see this come to fruition. A lot of individuals have worked on this project from its conception back in 2011. The next step is getting the infrastructure in the ground, then the work of bringing companies out to the park.”

The first two phases of the project will include water, sewer and transportation infrastructure — all of which are expected to be complete by late 2020.

The commissioners recently approved MAC Construction & Excavating's bid of $3,535,000 for the water and sewer line portion of the project. A matching grant of $3 million was also received from the U.S. Department of Commerce's Economic Development Administration for phase two, which will see the installation of an overpass for the railroad.

Oakes Road will be realigned to connect with Highway 64 directly across from the entrance to the park. That intersection will see the addition of a new stoplight to help with traffic flow. Lopp noted that his team is working with railroad officials to close four railroad crossings — three private and one public — including the nearby crossing at Old Georgetown Road.

On the opposite side of the tracks will be 14 lots ranging from one acre to four acres in size. The anchor tenant of the complex is expected to be named later this year.

“It’ll come back across, and we’ll have 60 acres between the railroad track and Interstate 64," Lopp said. "We’ve got that platted and zoned. As we’re getting the infrastructure in, we’re ready to market the site.”

Floyd County Commissioners' President Billy Stewart said the park is something he has wanted since first running for office. Its presence and the STEM jobs it will offer, he said, will help eliminate brain drain in the area.

“Floyd County is always known as a bedroom community of Louisville," Stewart said. "We have jobs and such, but we don’t have the kind of jobs this park is going to establish. Our kids go off to college, and a lot of them graduate with [STEM] degrees, and they come back here to start their families and careers. But there are no jobs in that field here, so they’re forced to go other places in the country. This park represents that our kids don’t have to leave."

The goal wasn't to emulate River Ridge, Stewart said, but to capitalize on Floyd County's own unique opportunities.

“River Ridge is really assembly plants and warehouses," Stewart said. "We don’t have room for million-square-foot buildings. We have to find our niche, and our niche is going to be technology. Floyd County has one of the highest graduation rates in the state and the whole region. We have more kids go to college than any other schools in this area. We have the brain power, and we have the people to actually work in these jobs.”

Lopp said the centerpiece of the site will be the homestead and farm currently sitting on the property. The farmhouse was once known as the Whistle Stop Inn, where trains heading to St. Louis would stop for food and passenger drop-offs. That building will be renovated into a "business incubator space." A neighboring barn will also be updated with the use of $200,000 received from the SoIN Tourism.

"We’re going to renovate that and make it into a public market space," Lopp said. "It’s not only going to be a space for the companies, but also for the public. We envision a farmer and artisan market concept and some events up there as well.”

State Rep. Ed Clere, R-New Albany, also had a hand in making the project come to fruition by obtaining money from the Obama Administration's stimulus package to build a new wastewater treatment plant in Georgetown roughly a decade ago. At that time, Georgetown was pumping wastewater to New Albany. The town had reached its capacity per their agreement with New Albany, however, stalling development.