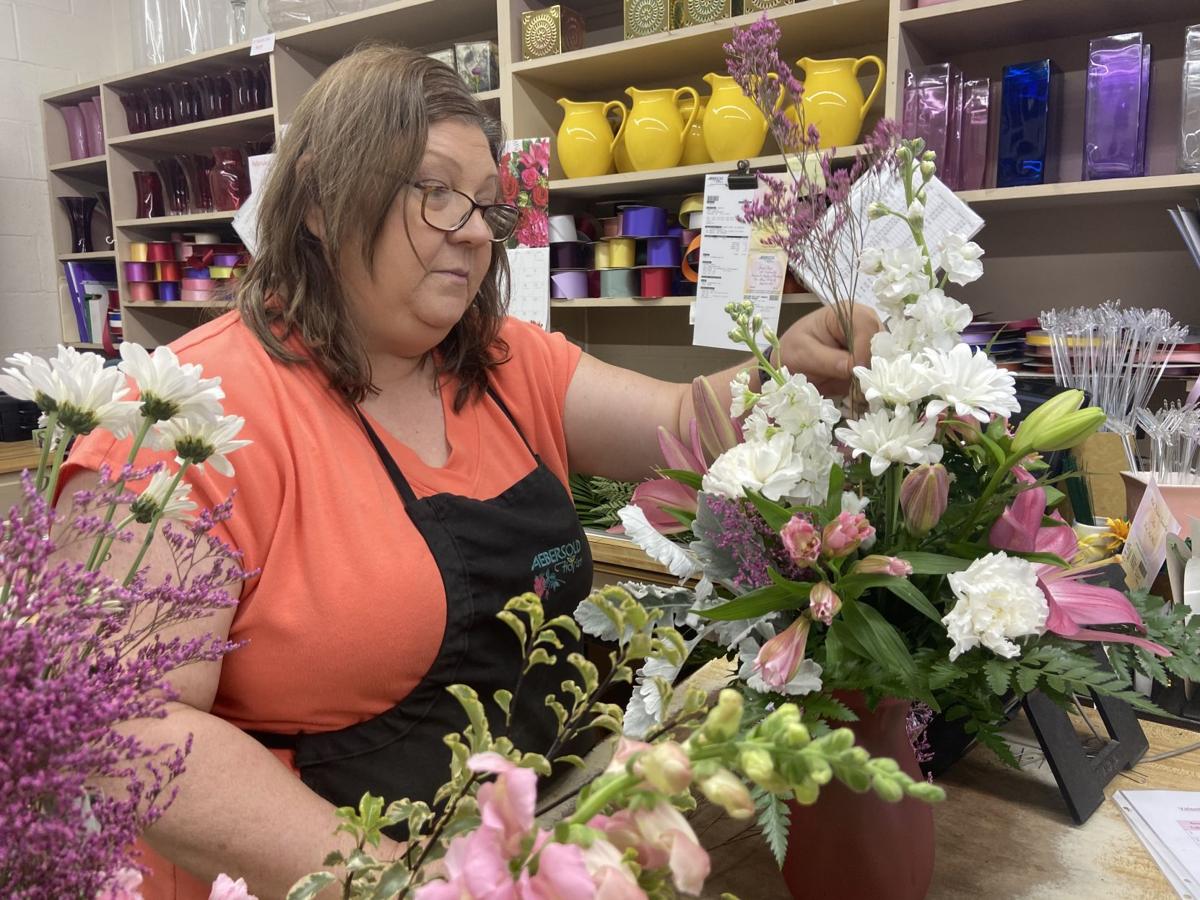 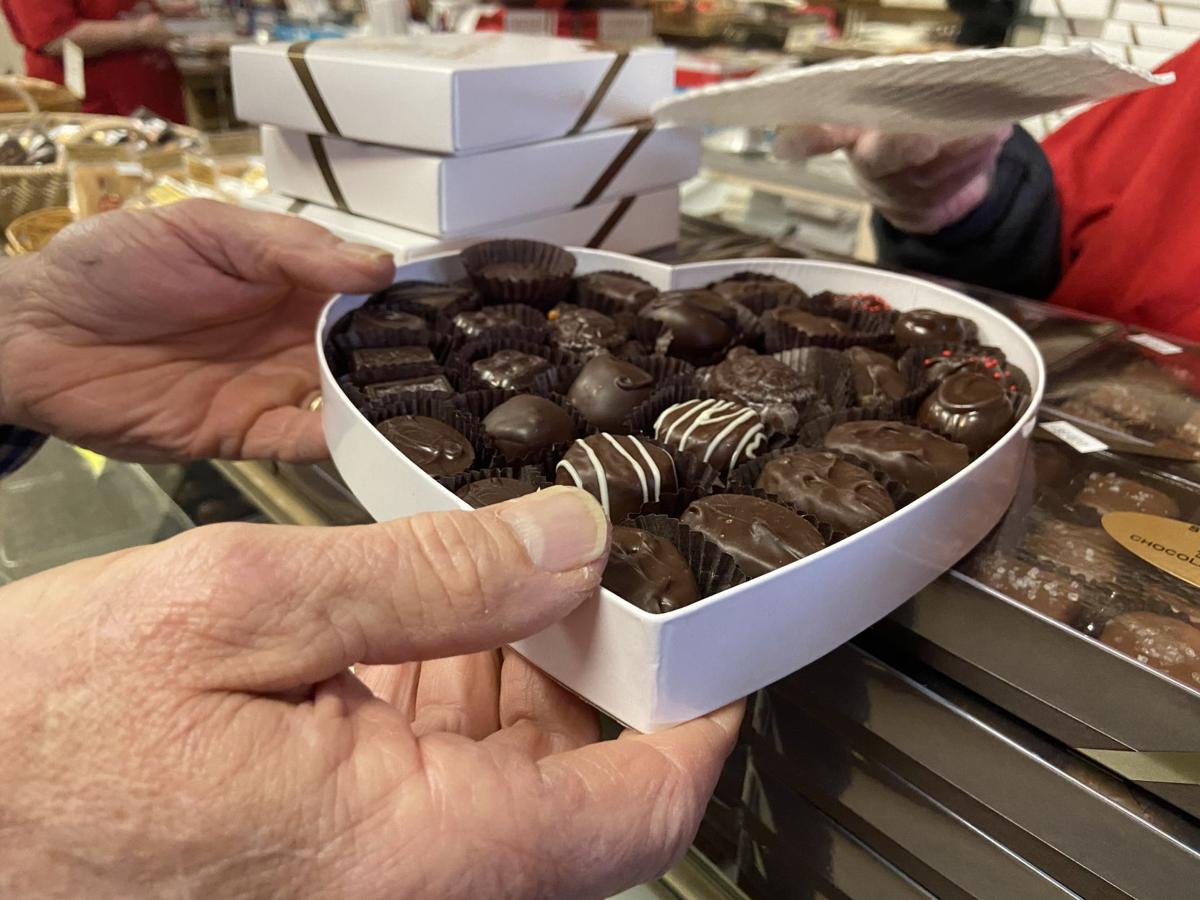 Michael Thompson buys a heart-shaped box of chocolates for his wife Monday at Schimpff’s Confectionery in Jeffersonville. He has bought Valentine’s Day chocolates from Schimpff’s for 25 years. 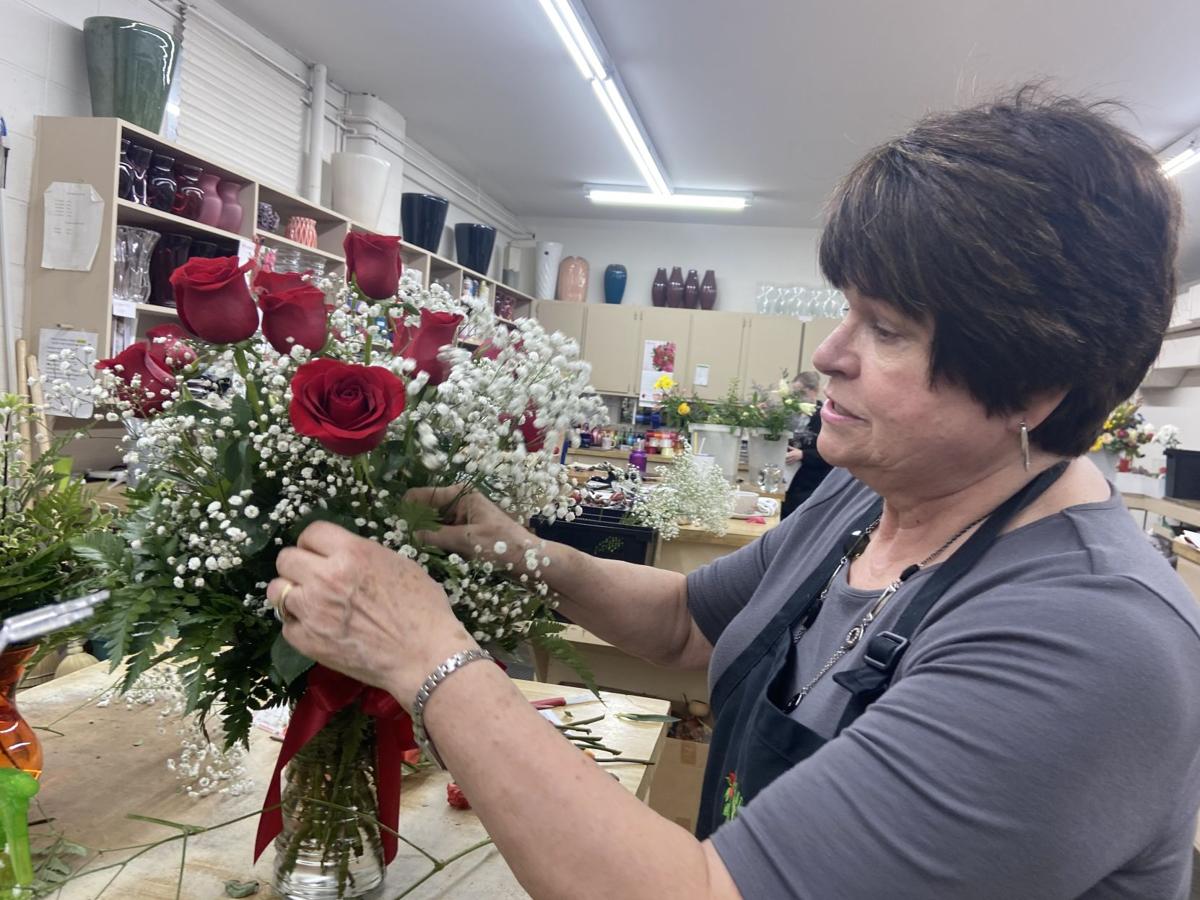 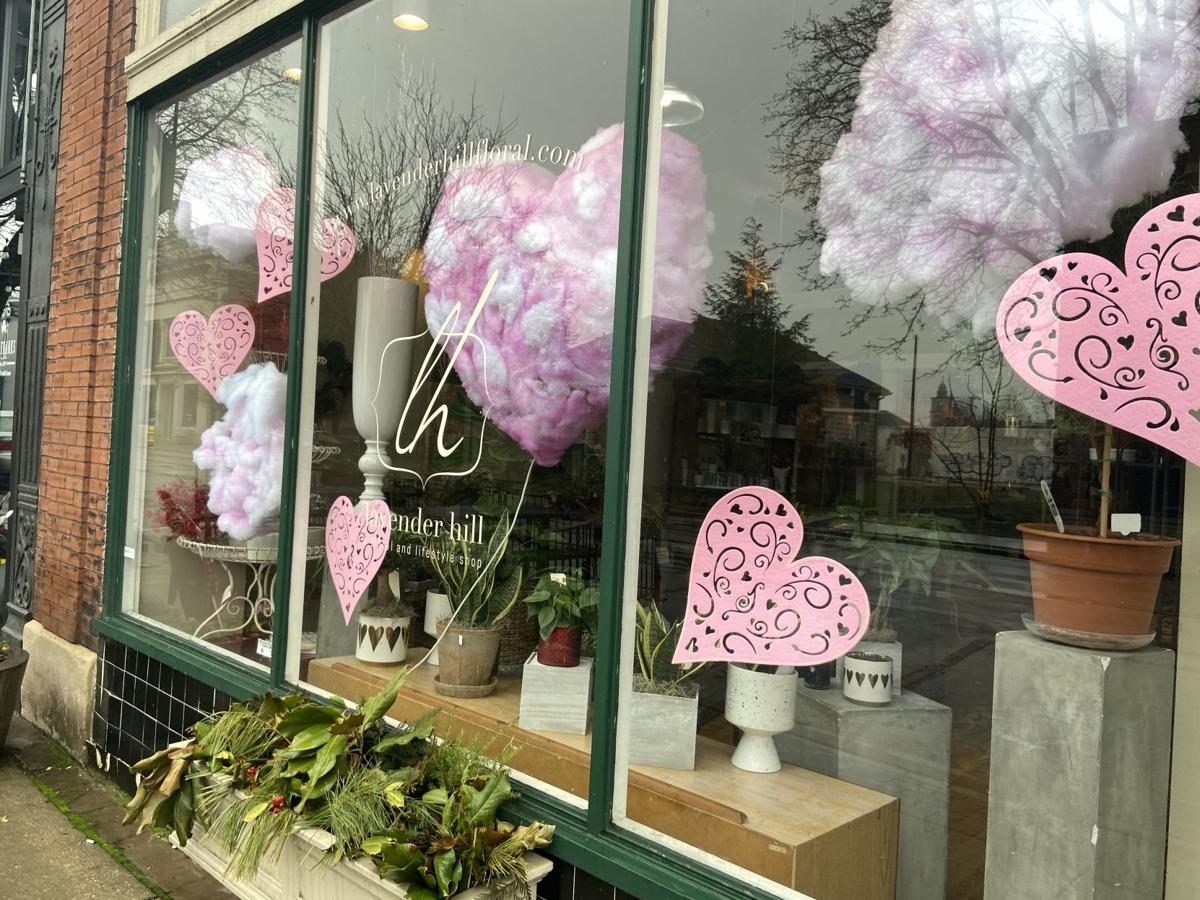 Lavender Hill Floral in downtown Jeffersonville is preparing for a flood of Valentine’s Day orders and deliveries. This is one of the florist’s busiest weeks. 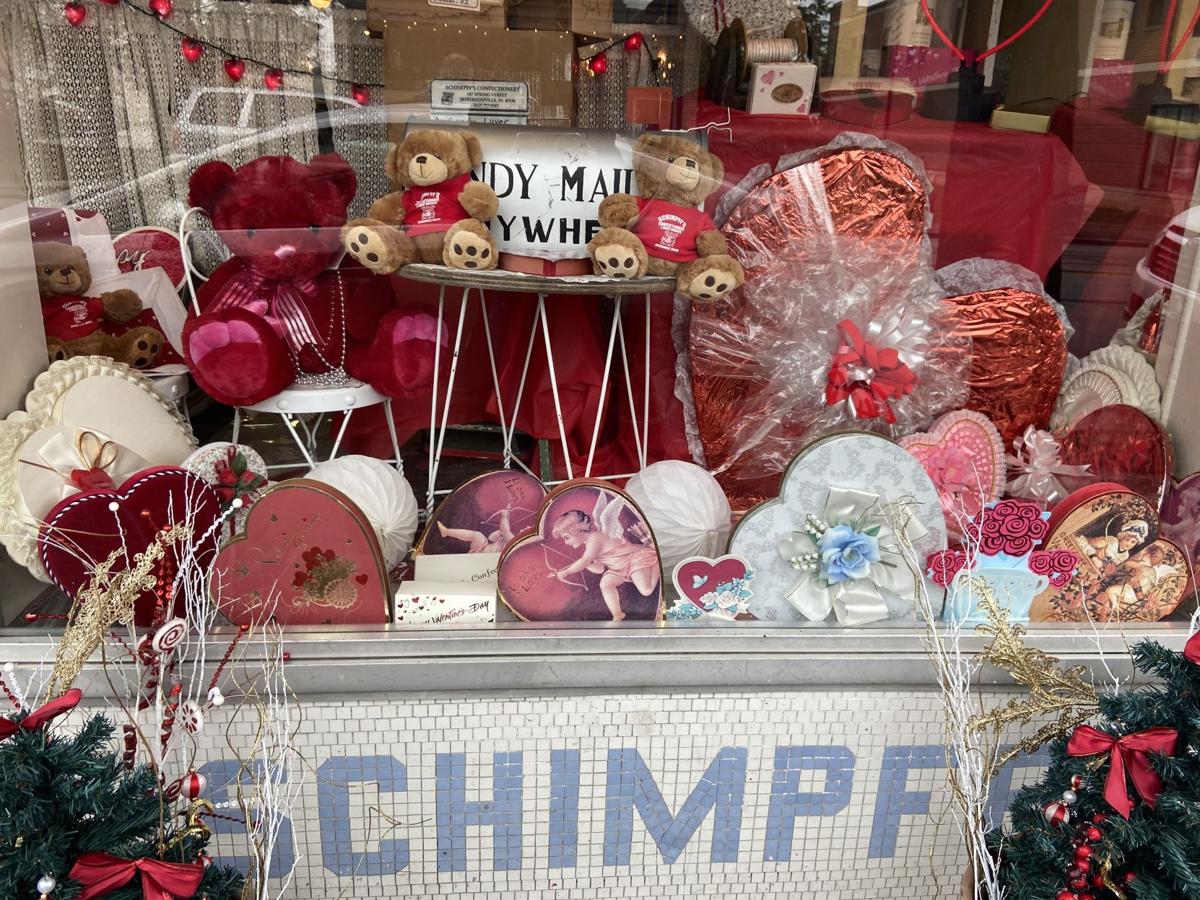 A storefront display at Schimpff’s Confectionery in downtown Jeffersonville is filled with heart-shaped chocolate boxes. The candy shop has extended hours this week to accommodate Valentine’s Day shoppers.

Michael Thompson buys a heart-shaped box of chocolates for his wife Monday at Schimpff’s Confectionery in Jeffersonville. He has bought Valentine’s Day chocolates from Schimpff’s for 25 years.

Lavender Hill Floral in downtown Jeffersonville is preparing for a flood of Valentine’s Day orders and deliveries. This is one of the florist’s busiest weeks.

A storefront display at Schimpff’s Confectionery in downtown Jeffersonville is filled with heart-shaped chocolate boxes. The candy shop has extended hours this week to accommodate Valentine’s Day shoppers.

On the Monday before Valentine’s Day, Aebersold Florist in New Albany was already busy preparing orders for Valentine’s Day. The shop already had several thousand roses in stock as of noon, and a refrigerated display at the florist was filled with floral arrangements of red, pink and white.

Valentine’s Day is a busy time of year for many local businesses, and for florists such as Aebersold, the special occasion means long hours, additional staffing and lots of hard work.

“By the end of the day, you’re really tired,” the shop’s co-owner, Lana Aebersold, said. “Our feet hurt, our backs hurt. Everybody comes in and we feed them, so our employees are well-fed and taken care of, and we keep working. It’s a hard job. I had one girl who worked for us…she once said, ‘this isn’t Valentine’s — this is cupid from hell day.’” I laughed and I said, ’it’s your attitude — just think, you’re making a lot of people happy.’ But it’s a rough holiday, I won’t kid you.”

At least five extra designers and 15 extra delivery drivers will be working for the florist this week, and they will be at the shop Thursday — the night before Valentine’s Day — until they have finished preparing the orders.

Aebersold, a family-owned business that first opened in 1908, has locations at 1217 Silver St. and 7414 Indiana 311 in Sellersburg. The business receives help each year from people who used to work at the shop.

“They used to work here when they were younger, and they have families and got a different job, but they come back for the holidays, which is fantastic,” she said. “They’re like family. You can’t always find good help, but when you have people who know what they’re doing, it’s so easy to say, do these orders. It takes years to train people to do things the right way so that the flowers last.”

Floral arrangements at Aebersold range from classic bouquets of a dozen red roses to intricate displays with flowers such as pink asiatic lilies, and they can be paired with chocolates, balloons and other gifts.

Carolyn Minutillo, owner of Lavender Hill Floral in downtown Jeffersonville, said the shop will start working on Valentine’s Day arrangements Wednesday. Along with the Kentucky Derby and Mother’s Day, Valentine’s is one of its busiest times of the year.

On Monday afternoon, Minutillo went to the airport to pick up a shipment of about 13 boxes of flowers, including orchids, peonies, roses and Dutch tulips.

They will be working in the shop late Thursday night — it could be until the “wee hours of the morning” — into Friday, and it requires plenty of coffee, she said. The shop will not have extra designers, but it will have about four drivers for the holiday.

“We have to have it done a certain way, and it’s really hard to find that right designer, especially that day,” she said. “You can’t have someone come in who doesn’t have that speed, because it’s just nonstop.”

Lavender Hill will stop taking orders after a certain point, she said. Many of the shop’s regular customers have already been placing orders, and others are calling to check prices. The shop receives both online and walk-in orders. The florist’s Valentine’s Day arrangements are selected from a list called the “Menu of Love,” and options range from traditional roses to succulents.

For Minutillo, the day after Valentine’s Day is rewarding when she is able to get a massage and visit the chiropractor after a busy few days at work. Between lots of lifting and standing for hours, it is a physical job, she said.

While many people will send flowers to their partner, not all of the Valentine’s Day arrangements sent to workplaces are romantic gestures, she said.

“We definitely have had some that will send to their wife, and then they’ll say, I know there’s someone else in the office who might not get anything,” Minutillo said. “We have had men who have said, I’d like to send something to another person in their office, and it might be someone who just recently lost their husband. We have had men do that in the past, and it’s just really sweet. It’s just meant to be a thoughtful gesture.”

Schimpff’s Confectionery in downtown Jeffersonville is selling plenty of Valentine’s Day candies this week, from heart-shaped boxes of chocolate to its famous Red Hot Hearts. Co-owner Warren Schimpff said Valentine’s Day isn’t quite as busy as the Easter or Christmas seasons, but it’s a “very significant season in the candy calendar.”

Many people bring in boxes from previous years to refill with chocolates, and many bring back the same box year after year, according to Schimpff. The family-owned confectionery opened in 1891 at its present location.

The shop has already made plenty of its Red Hot Hearts just in time for Valentine’s Day.

“We always have a lot of fun, because when we make the Red Hot Hearts, we break them apart by dropping them on the table, and kids get a big kick out of that,”co-owner Jill Schimpff said. “Then we get to tell them that Warren is a wonderful heart breaker.”