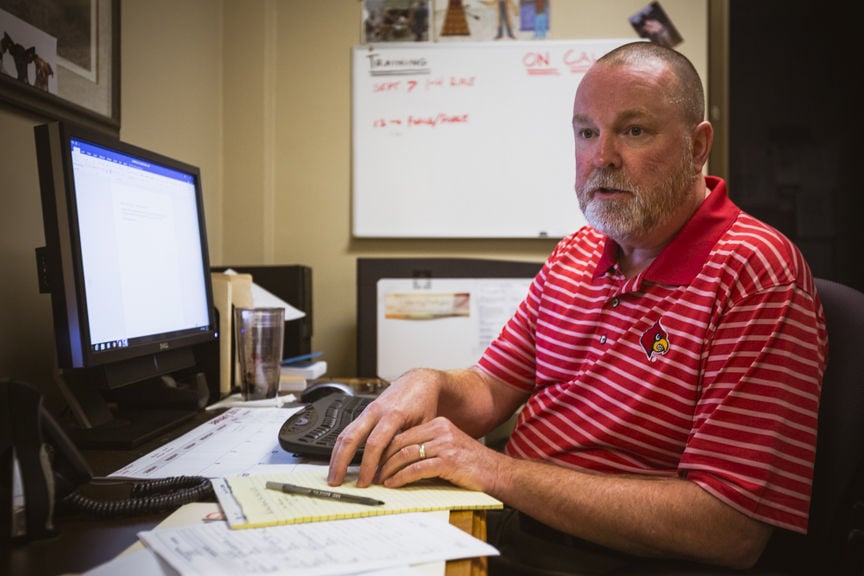 Maj. James Haehl talks about growing number of child molestation cases in his office at the Clark County Sheriff's Office in this file photo. 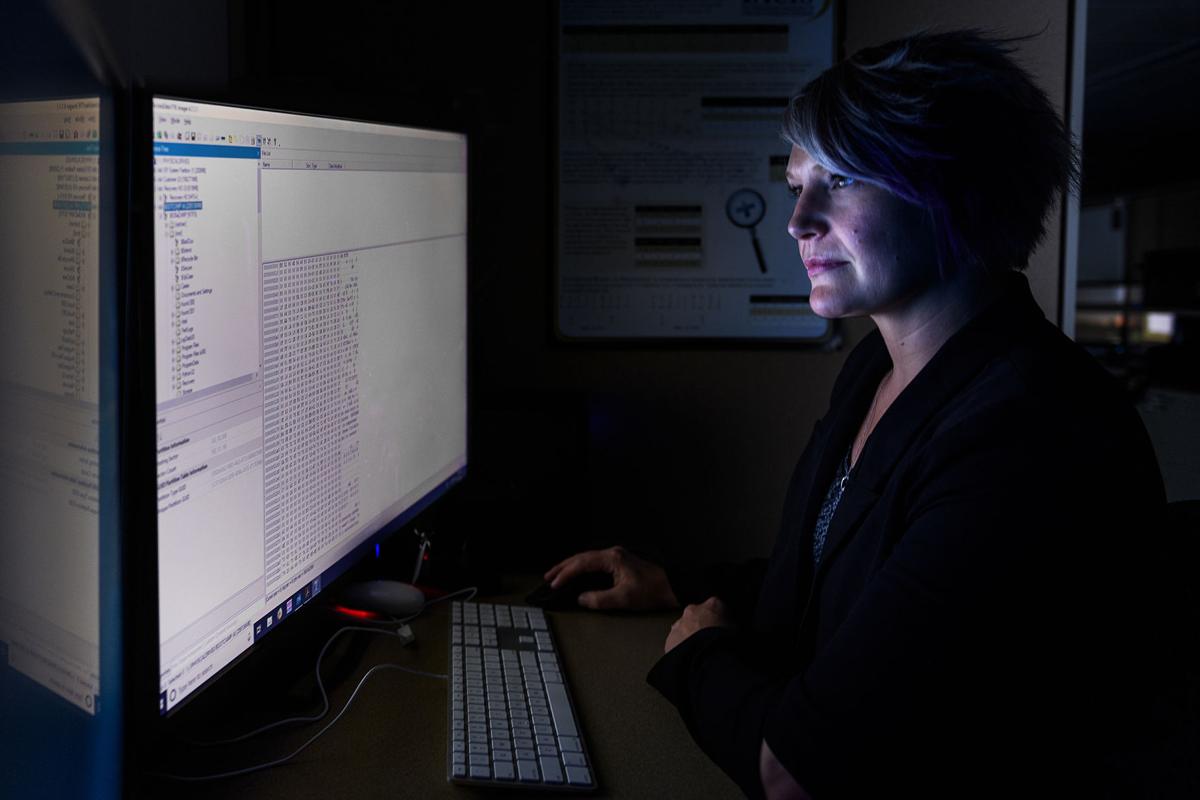 Kathryn Seigfried-Spellar, an assistant professor in the Purdue Polytechnic Institute’s Department of Computer and Information Technology, works on a computer in the Tippecanoe County High Tech Crime Unit in Discovery Park.

Maj. James Haehl talks about growing number of child molestation cases in his office at the Clark County Sheriff's Office in this file photo.

Kathryn Seigfried-Spellar, an assistant professor in the Purdue Polytechnic Institute’s Department of Computer and Information Technology, works on a computer in the Tippecanoe County High Tech Crime Unit in Discovery Park.

CLARK COUNTY — Chief of Detectives Maj. James Haehl can't even begin to count how many child pornography cases he's worked over his 25 years with the Clark County Sheriff's Office.

"Too many" would be the most accurate answer. Every case represents a child abused, molested and exploited. Some of them will haunt the detectives who worked their cases for a lifetime, regardless of whether justice was found.

Because those cases also represent the unimaginable task put to law enforcement officers: to review explicit images of child sex abuse in order to properly investigate such allegations and, if necessary, to send as evidence to trial.

"It's absolutely a horrendous thing to have to go through and look at, and to see that constantly is difficult emotionally as well to deal with," Haehl said.

And the work is constant. Since June, at least four child pornography cases have been investigated in Clark County, though not all necessarily by the sheriff's office, according to News and Tribune archives. Haehl said a recent case required one detective to review more than 1,200 images of child pornography. Doing so requires looking for details, writing descriptions and logging each image as a separate piece of evidence.

"Drained," is how Haehl described the feeling of working similar cases. He was assigned to the sex crimes unit in the 1990s and early 2000s and returned to the unit years later.

The impact of child pornography cases on law enforcement and cybersecurity analysts is not often discussed and even less often studied. A Purdue University professor is changing that.

Kathryn Seigfried-Spellar, an assistant professor in the Purdue Polytechnic Institute's Department of Computer and Information Technology, wants officers to know they're not alone. She wants to help them recognize the symptoms of work-related trauma and to remove the stigma of asking for help.

"We can't keep functioning the way that we are," she said in a recent phone interview. "It's going to continue to get worse."

Seigfried-Spellar first became interested in the prevalence of child pornography crimes while interning at the Indianapolis Metropolitan Police Department. Her interest soon turned to how officers were being affected by working such cases.

She began her study about three years ago with a survey sent to members of the Internet Crimes Against Children Task Force Program, or ICAC. The program represents more than 4,500 federal, state and local law enforcement and prosecutorial agencies.

What Seigfried-Spellar discovered was that the impact of child pornography was even greater when the investigator had multiple roles in a single case. For example, if the investigator who reviewed the pornographic images was also responsible for interviewing the suspect, that person reported more psychological symptoms. Those symptoms range from sleeplessness and depression to secondary traumatic stress disorder and suicidal thoughts.

At the Clark County Sheriff's Office, one person typically handles the digital evidence, but it's not an official policy. So it's not uncommon for an investigator to fill several roles in a case, compounding the negative effects. When Haehl explains why that might be, it's easier to understand:

Imagine having to look through images of a child being sexually abused and exploited, perhaps by someone the child knew or was even related to. Now imagine having to turn around and face the person accused of putting that child through such horror — but you can't scream and condemn that person.

"Because they'll shut down and they won't give you the information," Haehl said, adding that an investigator has to be "almost sympathetic" to the accused.

When Haehl works child abuse cases, he tries to operate as "just a machine." He knows the work has to be done, and to do so, he can't think too hard about what the victim had to go through or how they'll be impacted for the rest of their lives.

But despite his best efforts, Haehl isn't a machine. No officer is.

He also prays. It helps to keep busy, too, which he does as a historic re-enactor and blacksmith. But not everyone has a healthy outlet or a support system, and officers may hesitate to ask for help for fear of looking weak or being considered unfit for the job.

Seigfried-Spellar, who will present results from her study in February, said that given the stigma and potential impacts, departments should consider mandatory counseling. That's not the case at the Clark County Sheriff's Office, but officers have a chaplain to turn to, and if needed, they can be connected with mental health services. Haehl likened the work environment to a supportive family, with everyone looking out for each other.

"I know them, from working with them for so long. I know their moods and I know when I might need to pay a little bit more attention to one or another," he said.

If someone needs a break, they can rotate out of a particular beat.

"Obviously you get better working the cases with experience, but we don't want to put somebody in a position to where they're stuck, and you know, it's like being in a world of hell for too long, almost like a combat veteran," Haehl said.

A support system outside work can be difficult to come by. Seigfried-Spellar said a detective friend attributed his divorce to the job. Friends and family thought his work was "cool" when he was on homicide, but when he switched to working juvenile crimes, nobody wanted to hear about it.

"He lost all his support system," she said.

And even when people will listen, officers don't necessarily want to bring the work home.

"It's like bringing a demon into your house," Haehl explained.

People like Beth Medina hope that education and awareness can help officers excise some of the demons. Medina is the program director for SHIFT, or Supporting Heroes in Mental Health Foundational Training, founded in 2009. SHIFT works with members of Internet Crimes Against Children to educate law enforcement and help them mitigate the negative impact of being exposed to child pornography. Indiana State Police is an ICAC member.

Medina said SHIFT is inundated with requests for training, including requests from private companies with cybersecurity departments.

"We really have changed the culture around wellness," she said.

Medina is motivated by being able to help the heroes who rescue the victims of child pornography. Maybe doing so can help the victims, too.

At the end of the day, despite the personal toll, it's the victims who are at the forefront of Haehl's mind, and the minds of thousands of law enforcement officers across the country.

"To finally gain some justice for a person is, I mean that's why we do what we do. We're police and we do the best we can to gain justice for victims," he said. "But in cases like this ... while there might be justice through the courts, there's never going to be justice for the victim. This is something they've had to live with, and you can't change what happened.

"That's what makes these cases horrific."