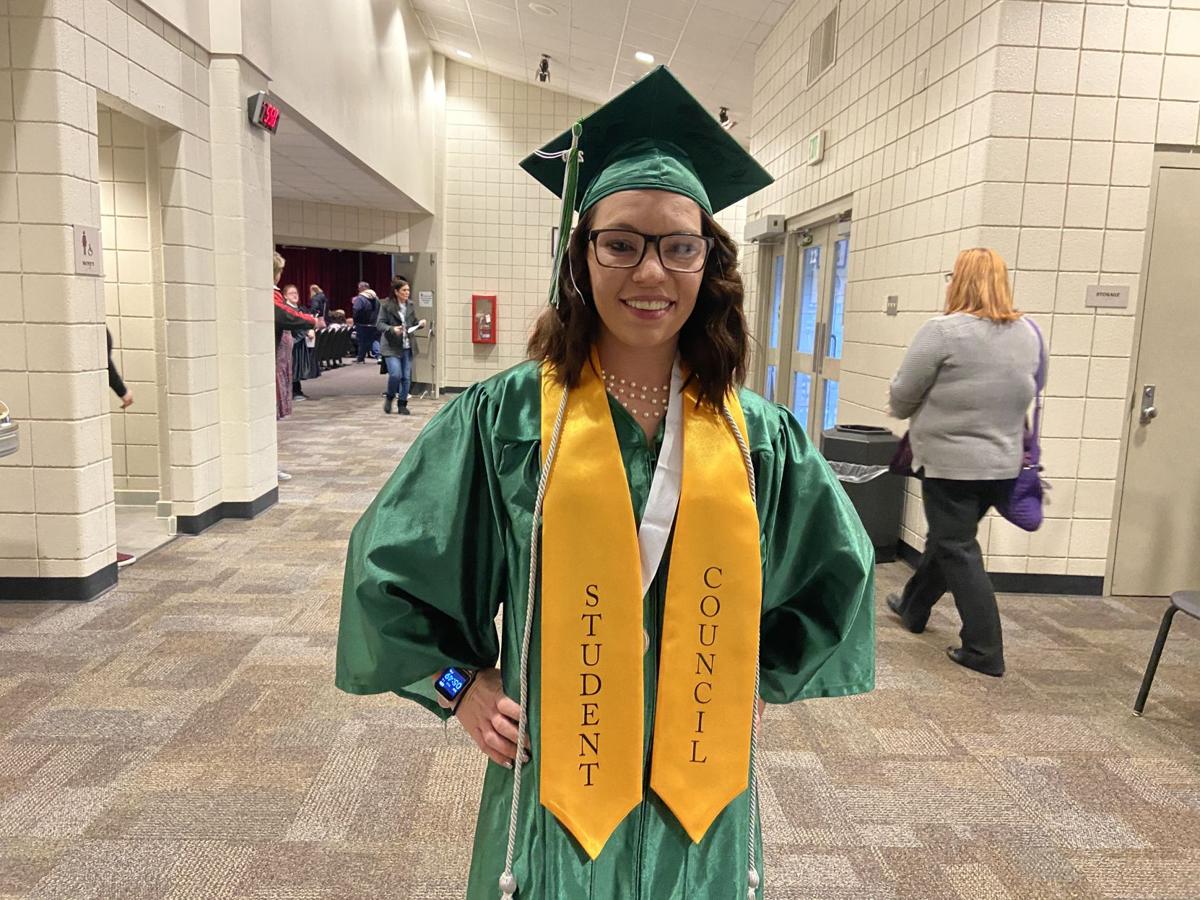 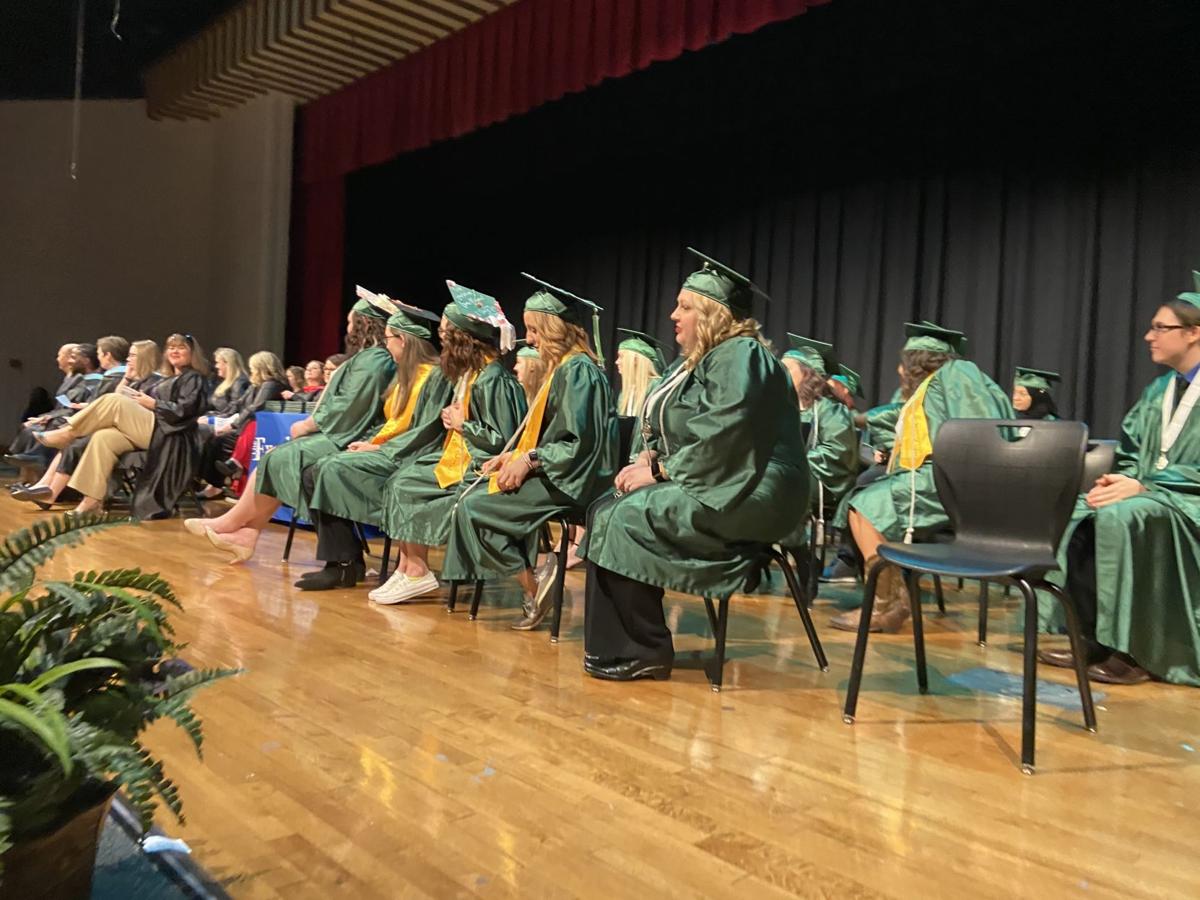 Graduates of The Excel Center in Clarksville took the stage Friday at a graduation ceremony at Scribner Middle School in New Albany. The tuition-free school helps adults complete their high school education.

Graduates of The Excel Center in Clarksville took the stage Friday at a graduation ceremony at Scribner Middle School in New Albany. The tuition-free school helps adults complete their high school education.

But after enrolling at The Excel Center in Clarksville, the 30-year-old was able to graduate with a Core 40 high school diploma, and she is now preparing to attend college and work toward her goal of becoming a special education teacher.

Knasel was the student speaker at Friday’s ceremony for the school’s graduating class of 2019. The Excel Center, located at 1329 Applegate Lane, is a tuition-free, public charter high school for adults operated by the Goodwill of Central & Southern Indiana.

The center provides opportunities for adults who previously dropped out of high school to earn their diplomas, including 24 graduates in the class of 2019.

The school offers life coaches, licensed teachers, a free, onsite childcare center and transportation assistance. Students have an expedited curriculum that allows them to graduate quickly as they prepare for college or careers, and the students can receive dual credits and industry-recognized certifications. The school’s next graduation ceremony will take place in June.

More than 12 percent of adults in Indiana lack a high school diploma, according to the U.S. Census Bureau. Lakia Osborne, director of The Excel Center, said the school started in 2017 with a low enrollment, but after just a few years, there are 340 students currently enrolled, and there is a waitlist for enrollment.

“We continue to get more and more students that need this service,” she said. “For me, this means more than just the students getting the high school diploma, but also being able to gain some self-sufficiency and increase their independence and really reach their full potential, because sometimes the barrier of not having a high school diploma prevents them from gaining the employment they really need or attending college.”

Osborne said the school hires teachers who are empathetic and understanding of the students, and they focus on pushing students to “new heights” and getting them out of their comfort zone. The school’s flexible scheduling, access to child care and other forms of support provide opportunities that students might not have in a more traditional learning environment.

“We have a model that really focuses on the whole person, and it is about relationships first and removing barriers second and then educating them,” she said. “Because we follow that model, we can have a different type of impact. I think the biggest challenges I’ve seen with students in a traditional setting is the barriers that exist outside of school that the traditional setting wouldn’t be able to tap into.”

Deborah Wesley, college and career readiness specialist at the center, helps place students in workplaces and schools to receive certifications ranging from welding to phlebotomy, and students can participate in internships and apprenticeships. She also coordinates college tours and job shadowing opportunities.

The students enrolled in the program range from age 17 to 65 years old.

Knasel will be pursuing a degree in early childhood education and special education through Grand Canyon University in Arizona. She is a single mom of three kids, and she wanted to show her kids that “anything is possible if you set your mind to it.” Her sons watched as she received her diploma Friday night, and they wrote her a poem telling her “Happy Congratulations.”

Knasel said the staff at The Excel Center believed in her when she did not believe in herself. Although she tried to earn a General Education Diploma after dropping out of high school, she didn’t pass her exams and she gave up, she said.

“The dream of wanting to finish my education became part of a nightmare that haunted me for the next few years,” she said in her graduation speech. “I was haunted constantly by the thoughts of never having the opportunity to finish school and see myself accomplish this goal.”

Six years ago, Knasel promised her grandmother that she would return to school and finish her high school education, but her grandmother died before Knasel went back. She said the thought that she was letting her down “replayed” repeatedly in the back of her mind, but through The Excel Center, she finally was able to reach her goal.

In early 2019, her cousin told Knasel that she was attending the center and encouraged her to begin classes; Knasel started school there in April 2019. There were many difficult days as she completed classes, including “sleepless nights with sick children to spending time in the ER to writing countless essays in the evening and having to present them the next morning,” she said.

The center’s flexibility and child care were integral to her success.

“I mean, anytime I had a sick kid or was sick myself or didn’t have a ride, [the staff members] were there, and I still talk to them daily, and I’ve been done since January,” she said. “I go visit them, and they’re just an amazing group of people. It’s an amazing opportunity for adults.”

Sellersburg resident Lauren Blythe, 30, said it means “basically everything” to graduate from The Excel Center with her Core 40 high school diploma. The staff helped her find a job and receive the certifications needed to pursue her plans of becoming a medical assistant.

“I’ll be able to finally find a job that I want to do,” she said. “No more fast food, retail — I’ve done that my whole life. I’m burned out,” she said. “It’s surreal. I can’t believe it. There was a time I thought I’d never be able to do it. It boosts your confidence and makes you feel really good.”

Palmyra resident Amanda Lowe, 22, a mother with three children, also graduated from The Excel Center on Friday. She dropped out of high school in the 10th grade, and now that she has her diploma, she is planning to attend nursing school. The school helped her with tutoring, child care and gas cards, and she felt welcomed with “open arms,” she said.

“In a traditional high school, you’d have to pay for your child care and everything else like that, so I felt like [the center] helped a lot more,” she said. “They’re more hands-on.”

Laverne Beyl, 82, entered eternal life on Sunday, May 31, 2020 at U of L Hospital. She was a Homemaker, member of the Sellersburg United Methodist Church and Northside Christian Church. Lavern was preceded in death by her husband, Larry Beyl, Sr. and a sister, Erma. Surviving are her four so…