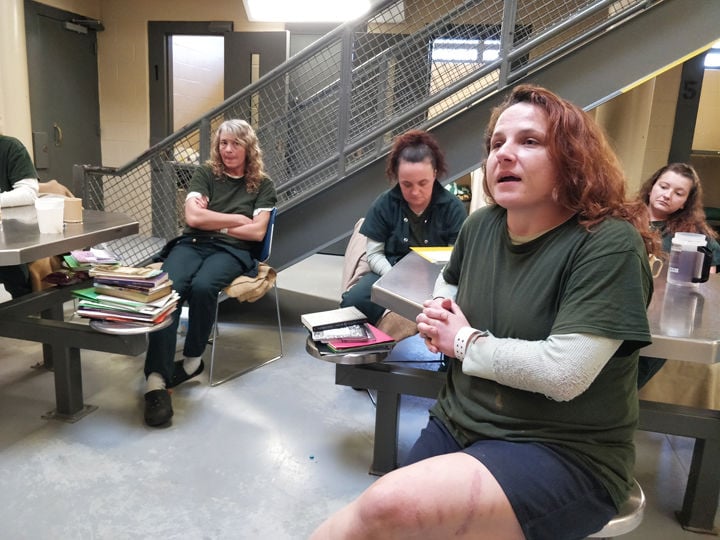 A program started earlier this year within the Floyd County jail has space for 16 women to work on life skills, education, self-esteem and addiction issues. The women, who are selected through an interview and application process, must show that they are ready to work on changing their thinking and behaviors — to help them succeed on the outside and not return to jail. 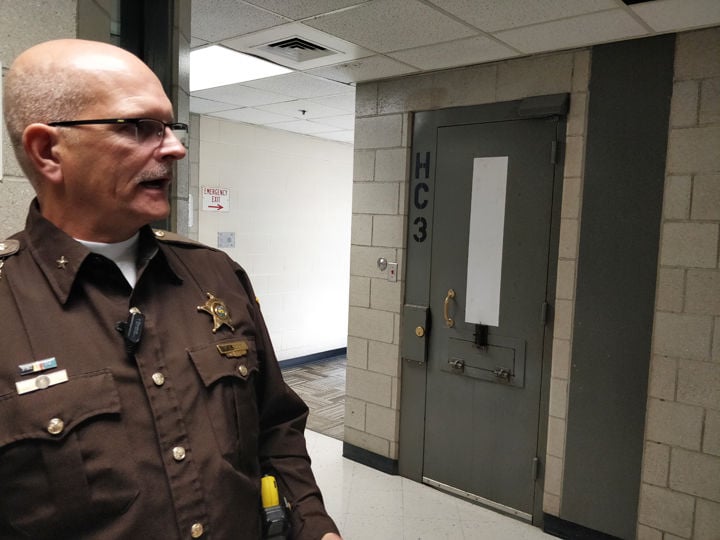 Floyd County Sheriff Frank Loop said a new jail program started this year specifically for women gives them the chance to break through the old thought patterns and habits, to help prevent them from returning to jail.

A program started earlier this year within the Floyd County jail has space for 16 women to work on life skills, education, self-esteem and addiction issues. The women, who are selected through an interview and application process, must show that they are ready to work on changing their thinking and behaviors — to help them succeed on the outside and not return to jail.

Floyd County Sheriff Frank Loop said a new jail program started this year specifically for women gives them the chance to break through the old thought patterns and habits, to help prevent them from returning to jail.

SOUTHERN INDIANA — A select group of women living in the Floyd County jail may have served time before, but they say a new program is giving them the tools, skills and confidence to help make this time the last.

The new program, which started at the beginning of this year, is a separate block with room for 16 inmates who are committed to focusing on themselves, addressing their addiction issues and supporting one another in their growth.

“It teaches you how to change your thinking, which is where we all mess up,” said Heather Goff, who's been in the Floyd County jail for almost a year and a half, and the program for eight months.

“I was sober for nine years. Since I've been locked up, I've had time to reflect on where I went wrong and recognize how not to do it again.”

The program is the brain child of Sheriff's Lt. Brett O'Loughlin and Michelle Cochran, a mental health worker who's contracted by the jail. They say the recent increase in the number of women in jail — largely due to drug issues or drug-related crimes — makes it more important than ever to develop and maintain meaningful programming for them.

"So we started putting it together building a curriculum [with] evidence-based practice," Cochran said. The jail has recently been awarded a grant to expand the program to men; she said they started with the women because "that population seemed to explode in a very short amount of time."

The women in the "program dorm" are given more freedoms and responsibility than those in the general block, and have access to more programming — like specialized classes and yoga. Coordinators work with them to help hone in on the personal life issues that caused them to be in jail, to help cut down on recidivism.

O'Loughlin said that while many jails have programs, often they're more basic —12-step program meetings or faith-based programs. And while those can be useful, they can lack the more personal focus the new Floyd County program offers.

"Every facility has some type of program, but it ends up being they try to cram everybody into that one-size-fits all," he said. "They're just spinning their wheels and the same people keep coming back.

"[This program is] not going to be a one-size-fits all. It's a program, but there are many programs within it. We're going to throw everything we can at it and see what sticks."

Each week, the women draw lots to see which jobs they'll have for the week — they could serve as a mediator to help sort out interpersonal issues among the inmates, or they could facilitate weekly programming, enforce chores getting done or keep track of records within the program.

A SHIFT IN POPULATION

In Floyd County, the average daily female population has nearly doubled between 2007 and 2017 to 59 from 35, a rise law enforcement attributes to the drug crisis that's shaken Southern Indiana in the past several years. The growth of the male inmate population has been more steady during that time in Floyd County.

Clark County law enforcement is seeing similar growth, rising to an average daily female population of 131 in 2017, up from 56 in 2007.

Clark County Sheriff Jamey Noel and his Floyd County counterpart Sheriff Frank Loop say the growth in numbers comes with challenges to spacing and increased health costs associated with women. On a recent day in Clark County, there were eight pregnant women in jail.

In 2016, Clark County initiated three new programs targeted specifically to address the needs of the growing female population. A 12-week writing workshop, taught by local freelance journalist Amanda Beam, is designed to help women express themselves through written words. There is a separate group for women who are victims of physical, mental or sexual abuse, to help pave the way for them to become empowered survivors. There is also a pregnancy class for women who are or believe they may be pregnant.

"The more tools you can give an inmate, especially a female inmate, hopefully [means] they won't return to jail and that's what's best for the family," Noel said.

In Floyd County, nearly all of the women in the program said they have been incarcerated multiple times, and most are currently in for drug-related charges.

“Even if their charge isn't a drug charge, it's usually drug-related,” program member Goff said. “Whatever they've done, it was to get drugs.”

Floyd County Sheriff Frank Loop said the program can change the course of a woman's life — to keep her from falling into the old ways before jail.

Often, they end up in jail again soon because "they go back to the same environment they had," Loop said. "The same friends, because they don't know anything else."

Cassidy Miller's story lines up with this — she said she has been in jail multiple times, whether in Floyd County or other facilities. She said this time, she got arrested on purpose because she knew she needed a change from the life she was living on the outside.

“I was doing everything right on the outside and everything was still screwing up and I was very, very tired,” she said. “And when I got here, I knew I wanted something different.

“We're all just tired of that life. We want something different and this is the first step to that.”

BUILDING EACH OTHER UP

While some jail opportunities, like receiving a GED or other certifications can mean credit off of their sentence, this is not the case with the new Floyd County program. Cochran, the mental health worker, said this helps ensure that everyone in the program is there because they want to be, and because they're committed to doing the work.

Because the women are housed in a separate dorm, they're not around the negative influences of others in jail who aren't ready or don't wish to try to change, Cochran said.

Program participant Miller said living in the dorm and having more opportunity for change is the opposite of the general pod, or other jails she's been in. It's calm, it's quiet, people are respectful and want the best for one another.

"In here, we call each other on our B.S.," she said. "Or if we're thinking something wrong or we're down on ourselves, we check ourselves and each other because we care enough to see everybody do well."

The women also support each other through positive affirmations — one women is selected and the others write down positive things about her.

"We've grown to be really close," Miller said. "We work together and uplift each other a lot."

And the work they do is showing in the way they feel. Joanie Watson recently received a certificate for completing a class; she said that feat makes others seem possible.

"It's a confidence boost, even doing your homework is a sense of accomplishment," she said. "Something little you accomplished and something bigger and it just builds up."

LIFE AFTER THE PROGRAM

The Sheriff's Department and the staff are working to increase partnerships with community organizations who will be available for continued mental health and addiction care after those incarcerated are released.

* Populations are rounded to the next whole number