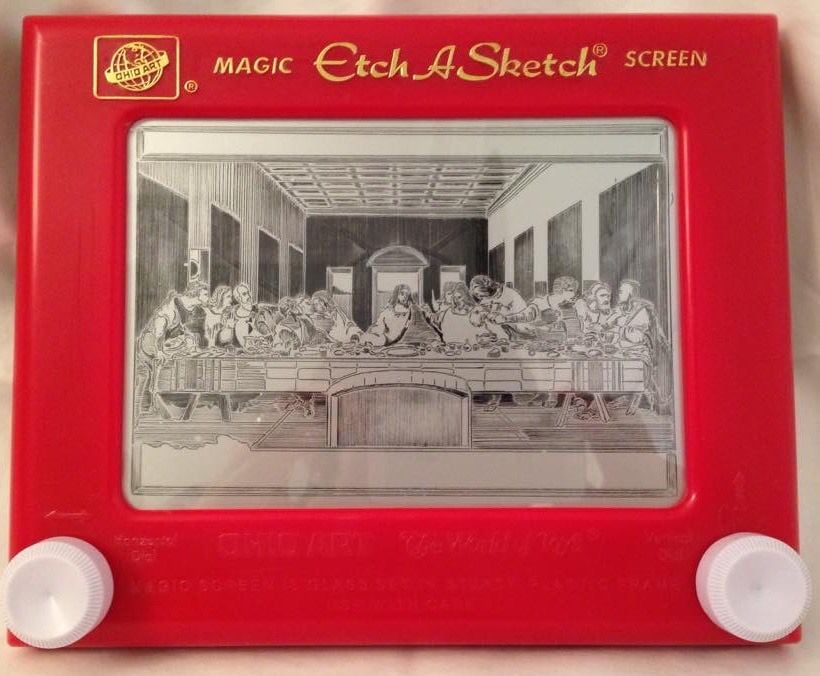 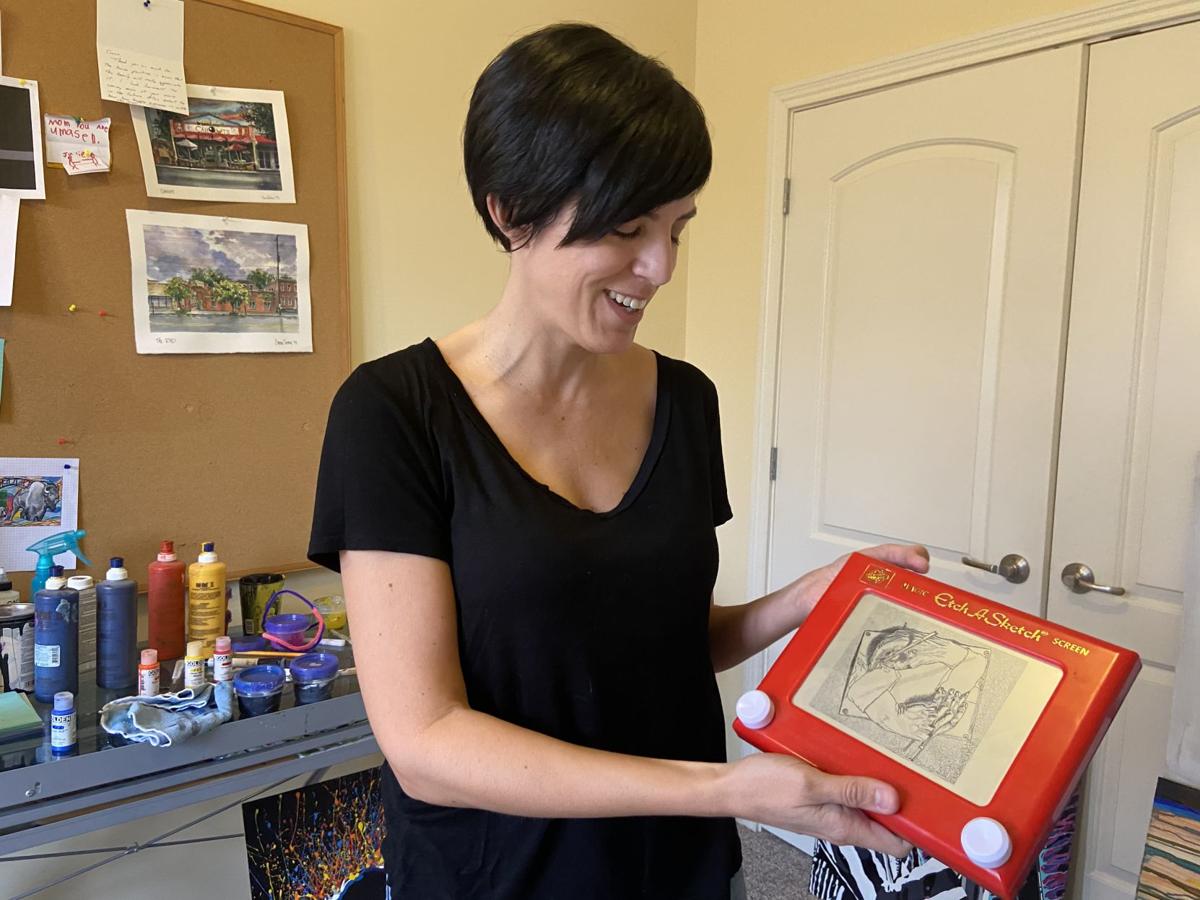 Local artist Carrie Johns holds a recreation of M.C. Escher’s “Drawing Hands” lithograph made with an Etch A Sketch. She is a professional artist who works from her Floyds Knobs home studio. 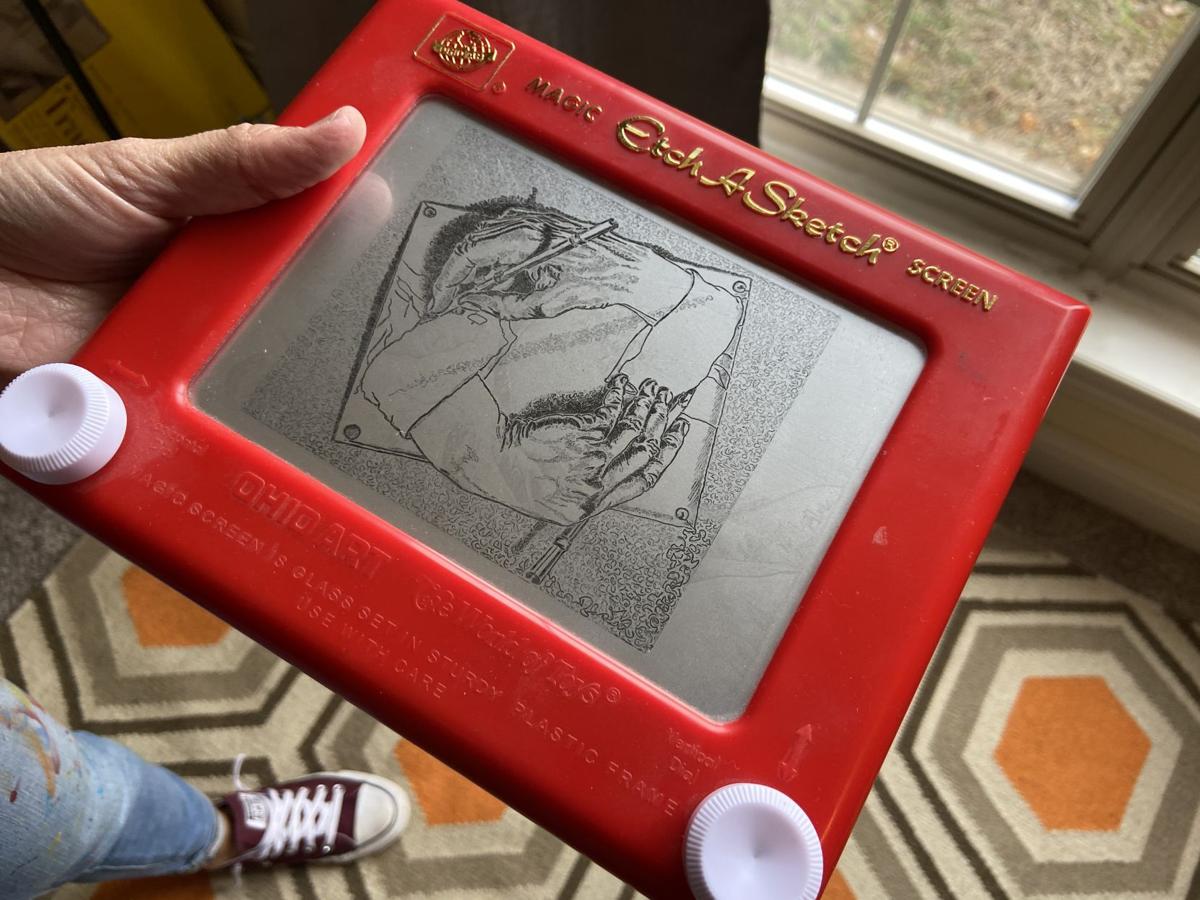 M.C. Escher’s “Drawing Hands” is among the famous artworks Floyds Knobs artist Carrie Johns has captured with an Etch A Sketch. 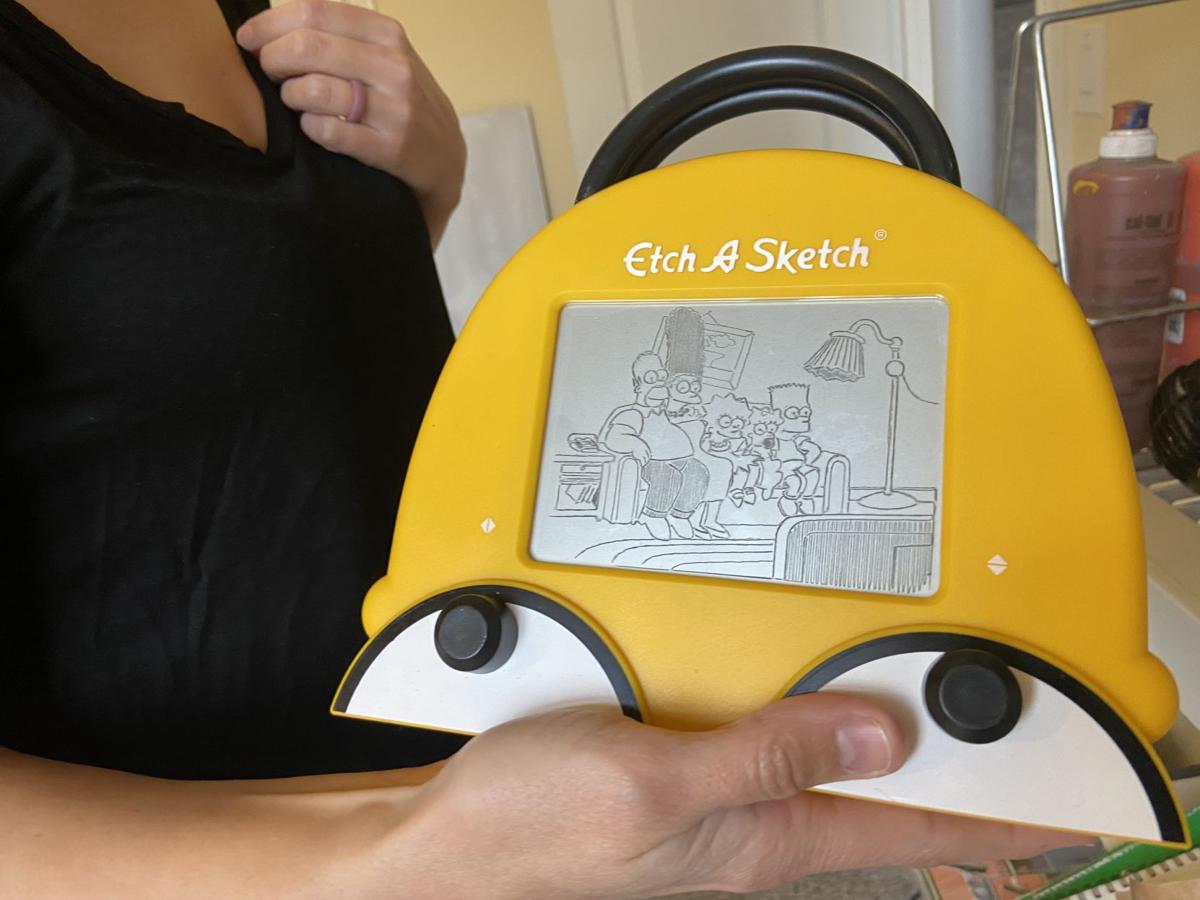 Floyds Knobs artist Carrie Johns has depicted images ranging from famous artwork to “The Simpsons” using an Etch A Sketch.

Local artist Carrie Johns holds a recreation of M.C. Escher’s “Drawing Hands” lithograph made with an Etch A Sketch. She is a professional artist who works from her Floyds Knobs home studio.

M.C. Escher’s “Drawing Hands” is among the famous artworks Floyds Knobs artist Carrie Johns has captured with an Etch A Sketch.

Floyds Knobs artist Carrie Johns has depicted images ranging from famous artwork to “The Simpsons” using an Etch A Sketch.

FLOYDS KNOBS — Floyds Knobs artist Carrie Johns has recreated artwork ranging from Leonardo da Vinci’s “The Last Supper” to the Beatle’s “Revolver” album cover, but these elaborate drawings aren’t made with the typical tools of the trade.

She is a master of the Etch A Sketch, and starting from a young age, she has captured intricate images between the red plastic frame of the drawing toy.

Johns, who graduated from the University of Louisville with a Bachelor of Arts in art history, has been a professional artist for more than 20 years in the Louisville area, and she works from her home studio in Floyds Knobs. She works in media such as oil and acrylic painting, mural art and signage, and she is considered one of the world’s best Etch A Sketch artists. She creates custom pieces from the mechanical drawing tool, including famous works of art and portraits of pop culture icons.

She has always been artistically inclined, she said, and at 9 years old, she took her Etch A Sketch on a long road trip to keep herself entertained. She would draw architectural images, including her own house, and these type of pictures served as building blocks for mastering the tool. When she picks up an art medium, she wants to become as good at it as she can, whether it is Etch A Sketch, painting or mural art.

As she started her Etch A Sketch art, Johns enjoyed seeing other people’s reactions.

“It’s almost like doing a magic trick, and I liked people’s reactions and the attention I got from it — that was kind of a motivating factor when I was little,” she said. “It just kind of grew from there. I don’t do it a whole lot, because it is kind of time consuming.”

It is difficult for Johns to explain her process of guiding the Etch A Sketch knobs to create such complex artwork.

“The more you work on it, the more the knobs on it are like an extension of your hand,” she said. “I don’t even have to think about it — it’s just kind of like using a pencil or anything else. You do it enough, and it comes naturally. It’s been a long time since I’ve ever had to think about it.”

As she started creating custom pieces for clients, one of the challenges was figuring out how to make the sketches permanent on an impermanent medium. She has learned to use various tools to cut open the back to remove the aluminum powder, wires, pulley and stylus, and she puts it all back together. Sometimes, she uses black spray paint to seal the Etch A Sketch so that there’s no loose powder.

She is part of a Facebook group featuring Etch A Sketch artists from across the country, and they trade tips on techniques. Spin Master, the company that owns Etch A Sketch, recently emailed her asking if she could be part of their celebration of the toy’s 60th anniversary.

She gets the most attention for her Etch A Sketch work, which has also helped her get more exposure for her other artistic skills.

“I still like to paint, I prefer that over anything else,” Johns said. “I definitely get a lot more attention though the Etch A Sketch, and once I get those people on board, then I can be like, oh, I can also can do this other stuff and get work out of that.”

Johns said some people find it difficult to believe that she could create such detailed artwork on an Etch A Sketch.

“A surprisingly large amount of people don’t even think that I did it,” she said. “Like if I post stuff online, they’re like, ‘that’s not real, she superimposed that image.’ I have to explain, I really did do that. It’s crazy. It’s weird to talk about, because it’s just something I’ve always done, and it comes naturally to me.”

Johns sometimes uses her Etch A Sketch art as a break from her paintings, she said.

“It’s just kind of an outlet that I use,” she said. “When you’re doing it, you really have to focus intensely on it, and if I’m in the middle of a painting project where I’m like I don’t know what else I can do with this, I’m just at a standstill, I’ll go draw something on an Etch A Sketch, and it just helps me clear my head and focus on something else. It’s kind of like an intense thing.”