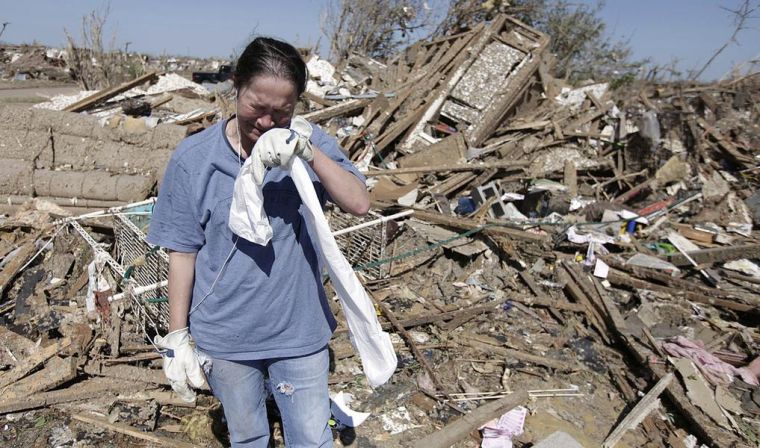 Kriket Krekemeyer cleans up her home in Moore, Okla., after residents were allowed back into their damaged neighborhoods Wednesday. Officials estimated the EF-5 tornado that struck Monday caused $2 billion or more in damage, affecting up to 13,000 homes. 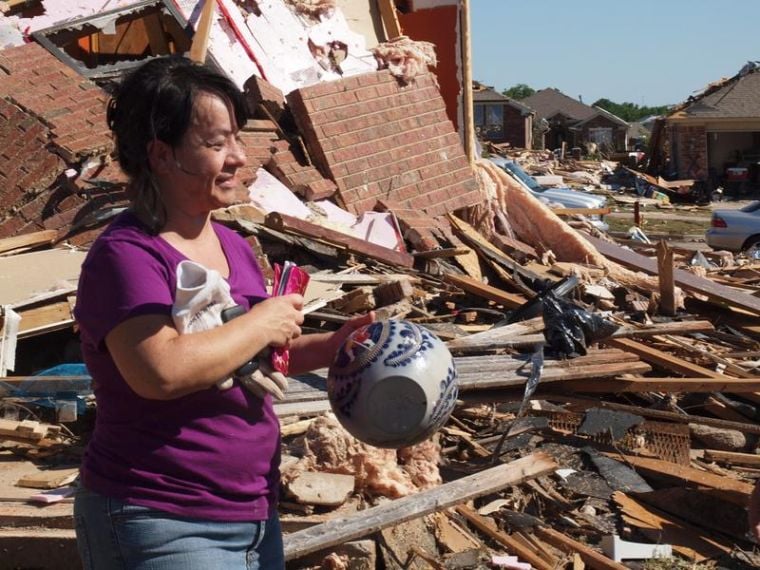 Rachel Hernandez salvages some possessions from the rubble of her destroyed home in Moore, Okla.

Kriket Krekemeyer cleans up her home in Moore, Okla., after residents were allowed back into their damaged neighborhoods Wednesday. Officials estimated the EF-5 tornado that struck Monday caused $2 billion or more in damage, affecting up to 13,000 homes.

Rachel Hernandez salvages some possessions from the rubble of her destroyed home in Moore, Okla.

Digging through the rubble of an unrecognizable city, people in this Oklahoma City suburb found familiar pieces of life before Monday's tornado.

Work crews recovered a dresser that belonged to Rachel Hernandez from the remains of her home near S.E. Fourth Street and Bryant Avenue. Inside was a treasured photo of her grandmother at age 17.

“I had an entire collection of family photos in that dresser,” said Hernandez, who also salvaged a German antique pot, as well as some mementoes she didn't' recognize.

“I was pulling out stuff that didn't even belong to me earlier,” she said.

On Wednesday afternoon, Hernandez and other Moore residents were allowed back into their neighborhoods for the first time since the EF-5 tornado devastated much of the city. It was a salvage operation for many.

“It's just stuff,” said Matt Claxton, who had been watching the storm develop on television Monday until he and his wife saw on social media that the storm was behind the nearby Warren Theatre.

“We grabbed what we could and ran to a shelter,” he said. “When we walked out it looked like a war zone was here.”

Then they saw the remains of their house. At that point, said Claxton, they were just thankful to be alive.

Standing in his driveway Wednesday, Maxton surveyed a scene of destruction that seemed to stretch for miles.

“I don’t want to see anymore of Moore,” he said. “Just looking at this is tough.”

Others also expressed relief that they and their loved ones avoided the tornado, often because of a simple mistake.

Katrina Withey’s daughter, Kyla, locked herself out of their rented house Monday. Kyla’s father took her and her little brother to work with him before the weather turned bad.

Had Kyla not forgotten her key, said Withey, her children would have been home when the tornado obliterated their home.

Chris and Renae King knew the condition of their home before Wednesday. Renae was persuaded by Chris and her family to leave for her mother's house as the storm got bad.She returned to check on things shortly after it passed.

“As I walked closer I said, ‘I think it got us. Yep, the roof is gone,” she said. “Then my dog went in and was smart enough to find a rawhide bone under all of the rubble.”

It was a good thing she left, said Chris, because a refrigerator came crashing through their bedroom wall. The walls and roof over the kitchen, for the most part, were gone.

“We were going for more of an open concept,” Renae said with a laugh.