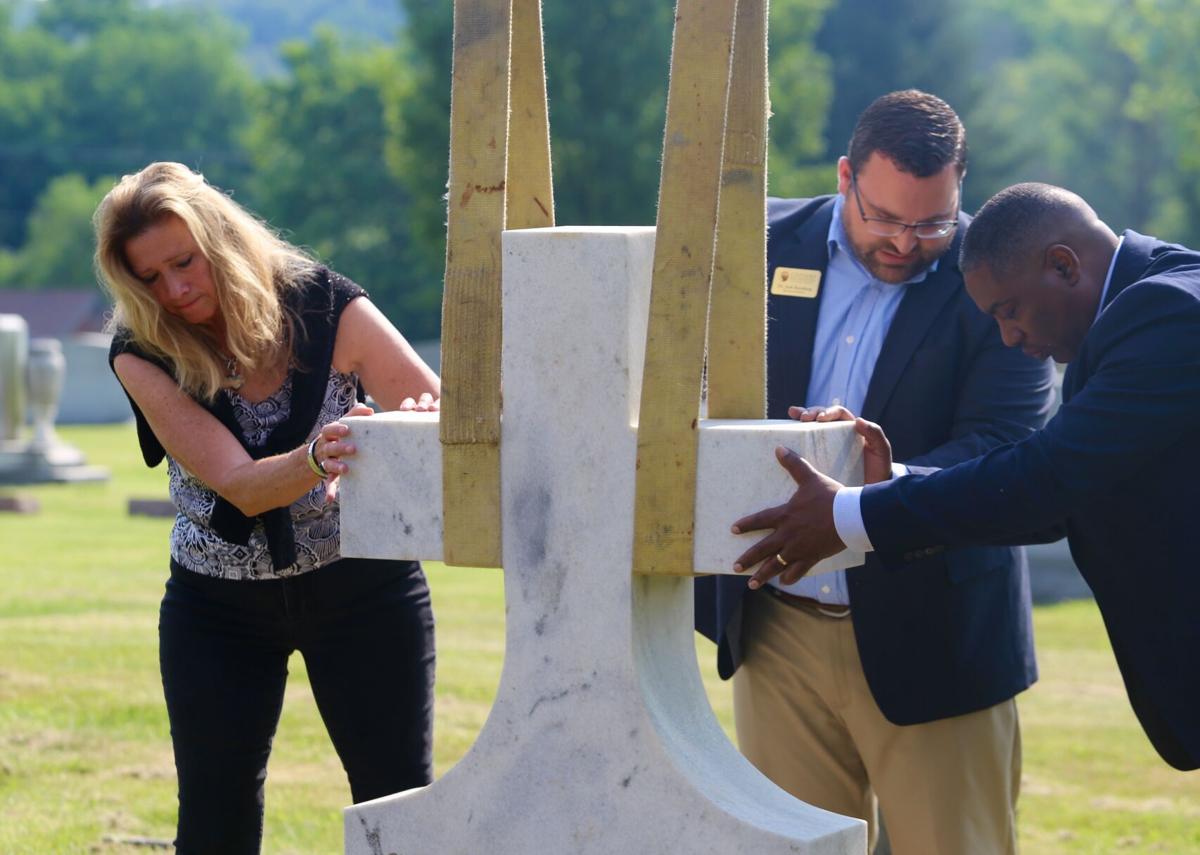 From left, Teri Popp, Josh Kornberg and Shawn Carruthers help steady a cross marker on its base Friday. In the coming weeks, the names of the 27 people buried at the site will be inscribed on the marker. 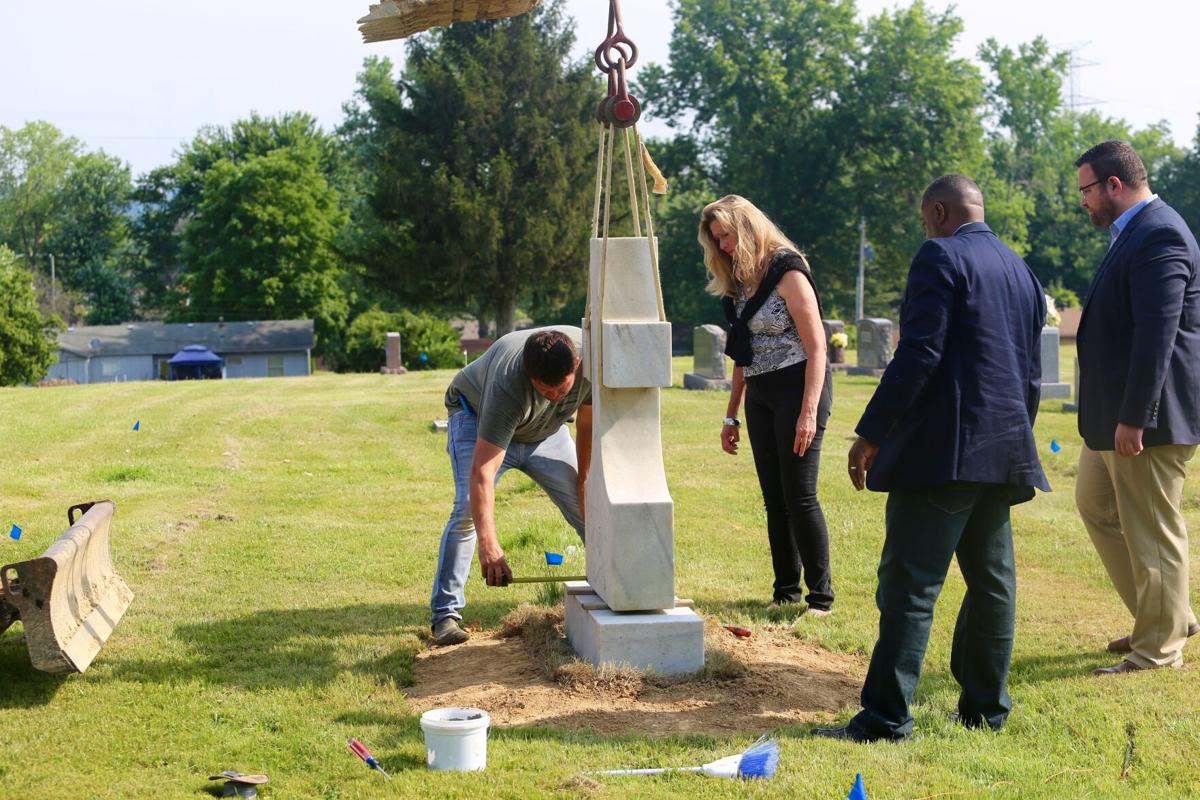 From left, Joe Schoenagel, Teri Popp, Josh Kornberg and Shawn Carruthers install a cross marker Friday at the site of the former Black section of the Holy Trinity Catholic Cemetery in New Albany. 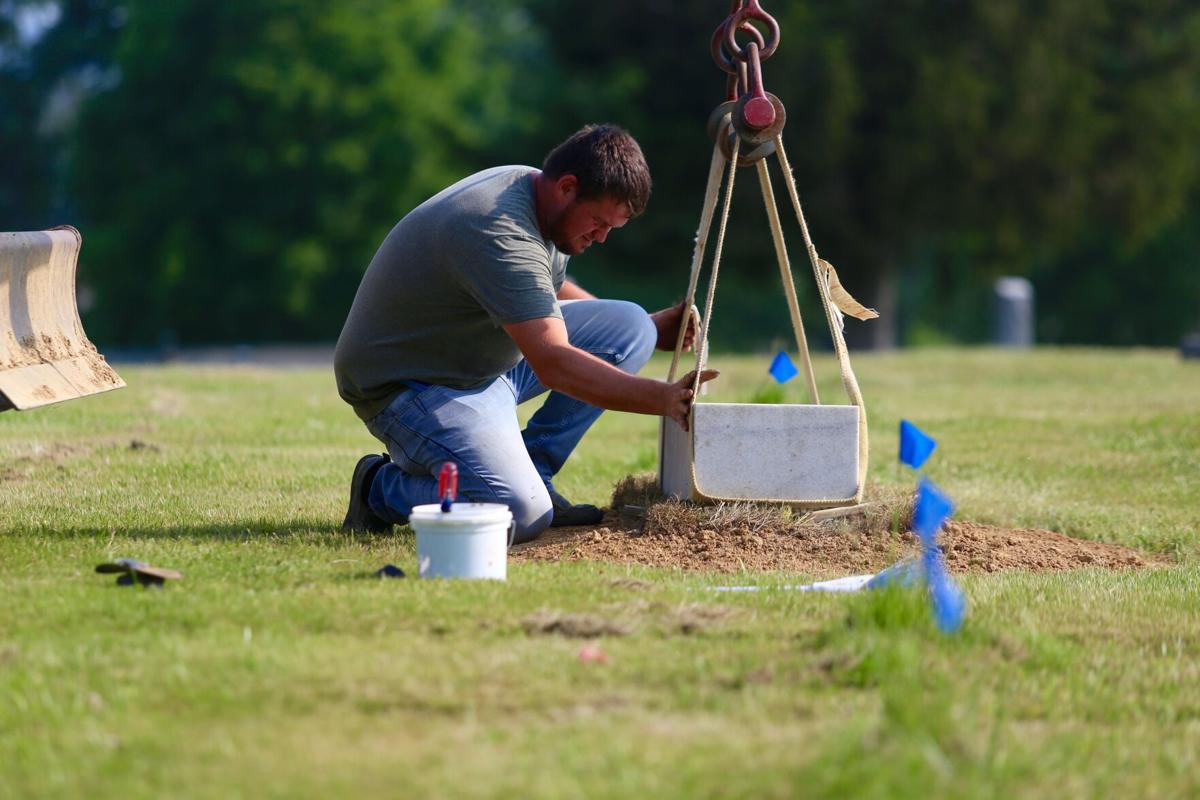 Joe Schoenagel levels the base for the marker on Friday morning. 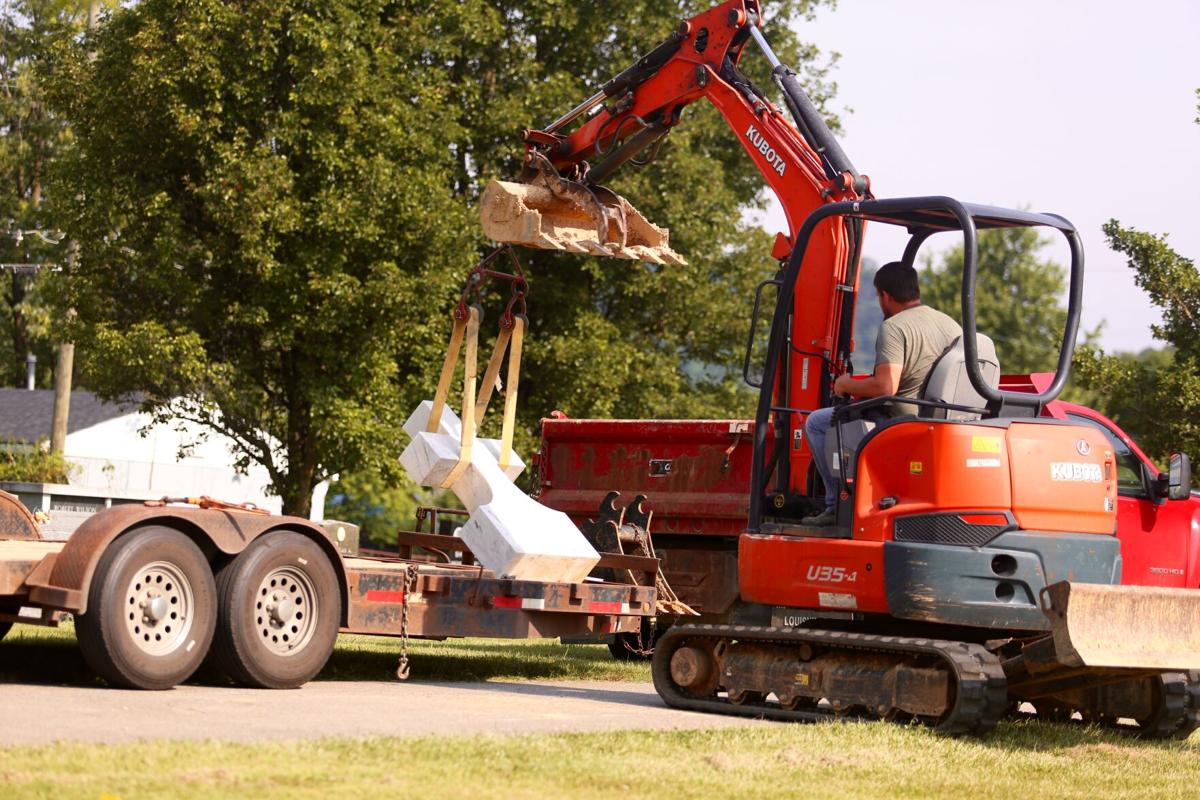 Joe Schoenagel of GraveCare removes the cross marker from a trailer Friday morning before placing it in recognition of 27 Black people who were buried at Holy Trinity Catholic Cemetery without markers.

NEW ALBANY — It’s tranquil inside the Holy Trinity Cemetery on Friday morning, with the only discernible sounds coming from the backhoe that’s parked near what appears to be an undisturbed portion of the property.

But underneath the ground lie the remains of 27 Black men and women who were buried in mostly unmarked graves. It’s believed that the first burial in the Black section of the New Albany cemetery occurred in about 1897, with the last internment occurring in 1966.

Teri Popp, manager of the Catholic Cemeteries of New Albany, said a person deserves a grave marker once they are laid to rest. And while those Black departed weren’t given the proper emblem to signify that they lived and died just like the White people who are buried in the same cemetery, Popp and others corrected at least some of those wrongs with the installation of a large, marble stone cross near their graves.

“We can’t change the past, but we can make everyone aware of what has happened,” Popp said.

The effort came about with the help of the Caesars Foundation of Floyd County, a family that donated the cross marker and an anonymous contributor who aided with other expenses. The project was also the result of timing.

In April, Scott Stewart and Shawn Carruthers had approached Popp about raising some funds to restore the marker of former U.S. Supreme Court Justice Sherman Minton, who is also buried at Holy Trinity. Minton is noted for voting to end segregation in schools in the 1954 Brown vs. Board of Education case.

While they were discussing Minton and his role in righting discriminatory wrongs, Popp brought up a related issue that she said has troubled her since she learned about the Black section of the cemetery. Popp sought a way to recognize the lives of the Black people buried in that portion of Holy Trinity, and Stewart and Carruthers expressed interest in addressing both issues.

Carruthers, who is the president of the Floyd County Commissioners, sits on the Caesars Foundation board. He approached the organization about the project, and the board voted to contribute $1,500 to the efforts.

The Caesars money covered the expenses for setting the cross stone marker. Joe Schoenagel of GraveCare unloaded the marker Friday and placed it with the help of Popp, Carruthers and Josh Kornberg, executive director of the Caesars Foundation of Floyd County.

In the coming weeks, the names of the 27 people buried at the site will be inscribed on the marker. It’s Popp’s hope that QR codes can be added to the marker and the Minton statue so that people can scan the data on their phones and retrieve more information about the graves, and the lives of those who are buried beneath them.

“I think in doing this and calling attention to this, we learn from our past,” she said. “Just because it doesn’t look like there’s anyone buried there, there are lots of souls there that need special attention right now.”

Popp is hoping to learn more about the people buried at the site. She researched newspaper articles of the period and found few clues about the Black section of the cemetery.

New Albany physician Dr. William T. Miles, along with members of his family, is buried there. He died in 1942, and there’s been some discussion that he may have purchased the lots.

Popp recalled at least one occasion when someone stopped at the cemetery to inquire about a possible family relation to one of the Black people buried in that section. Once the inscriptions on the marker have been added, she hopes it will spur more interest that could potentially lead to more knowledge about the lives of those buried in the cemetery.

There are a few of the graves that have small markers that are barely distinguishable when on the site. Popp said some of the graves also appeared to have been marked with just a rock.

Carruthers was drawn to the project because he believes those buried without recognition deserve dignity.

“It’s a good time to pause and reflect on the past, and also, let’s work to make a better future. And by doing what we’re doing here today, in the shadows of Juneteenth, it’s good to take time out and try to do something positive for those who are less fortunate than us,” he said.

Installing the marker doesn’t fully account for the wrongs the deceased faced both in life and after death, but it’s a step toward acknowledging those mistakes and hopefully keeping them from occurring again, Kornberg said.

“Obviously our country is really dealing with a reckoning, and I’m proud to be a part of a community that’s embracing a part of our history and recognizing that there were definitely some shortcomings along the way,” he said.

If anyone has more information about those who were buried in unmarked graves, they are asked to contact Popp at Teri@stmarysna.org.