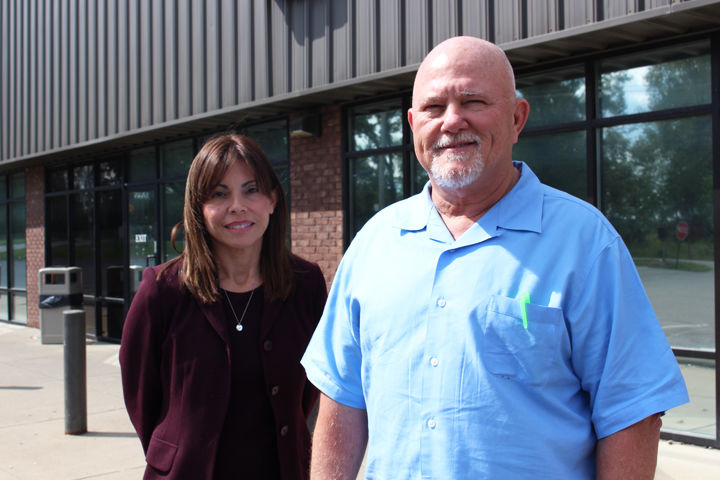 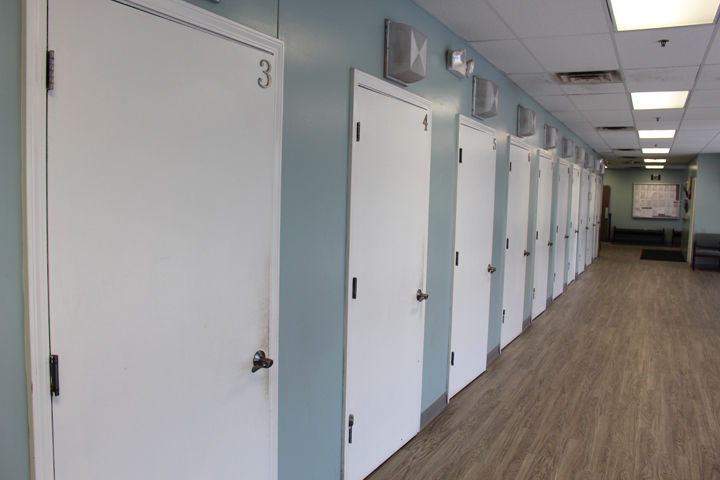 Patients at the Southern Indiana Comprehensive Treatment Center line up in this room to get medication for opioid use disorder. Each is given their dosage behind one of the doors, with a nurse present. 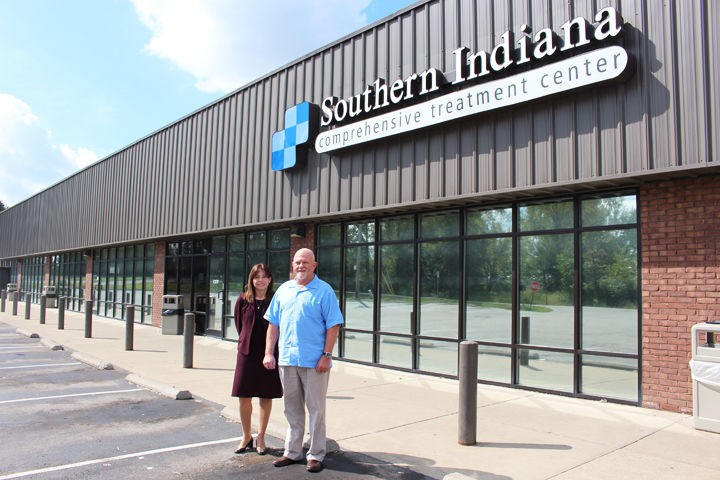 The Southern Indiana Comprehensive Treatment Center in Charlestown has approximately 1,800 patients, there for medication assisted treatment for opioid use disorder. Dr. Milagros Rivera, left, and Dr. Lawrence Schoch, are medical directors there.

Patients at the Southern Indiana Comprehensive Treatment Center line up in this room to get medication for opioid use disorder. Each is given their dosage behind one of the doors, with a nurse present.

The Southern Indiana Comprehensive Treatment Center in Charlestown has approximately 1,800 patients, there for medication assisted treatment for opioid use disorder. Dr. Milagros Rivera, left, and Dr. Lawrence Schoch, are medical directors there.

SOUTHERN INDIANA — As state and local leaders work to find solutions to the opioid crisis, some say the need for medication assisted treatment is one of the most effective ways to get those addicted into recovery. Opponents, however, say it's trading one drug for another.

WHAT IS MEDICATION ASSISTED TREATMENT?

Medication-assisted treatment is the use of one of three drugs — methadone, bupenorphrine (brand name Suboxone) and naltrexone (brand name Vivitrol), in combination with behavioral therapy, to help those addicted to opioids control their cravings through recovery.

Their uses are governed by state law. Opioid Treatment Programs are those facilities which are permitted under law to dispense methadone, a synthetic drug related similar to morphine that is used to regulate patients' addiction cravings as they go through recovery.

Other MAT drugs — bupenorphrine, which acts in a similar way but also helps prevent patients from using opioids at the same time by making them nauseated, and naltrexone, a monthly injection — have other regulations, but all three may be used at one facility in some cases.

In Indiana, the number of OTP programs is regulated by statute, and recent legislation means more are in the works. There are currently 18 programs operating in 15 cities in Indiana, the last five of which opened in June. Legislation passed last year opened up the state to adding nine more programs — something state leaders say is currently the best way to give people the opportunity for success in their addiction recovery.

“Medication-assisted treatment is the gold standard for treatment on an opioid-use disorder,” Indiana Drug Czar Jim McClelland said. “That combination (MAT drugs and behavioral therapy) is far more effective than abstinence only in treatment.”

At the Southern Indiana Comprehensive Treatment Center in Charlestown, the largest OTP in the state, the staff sees about 900 patients each day for their medication. Another 900 are on a less frequent regimen.

Drs. Milagros Rivera and Lawrence Schoch, medical directors at the center, run a facility they say not only is helping save the lives of so many who are addicted, but also helps get them back into being productive members of the community.

"Simply put, it's about saving lives and that's truly what happens here," Schoch said. He said that means not only fewer chances for overdose deaths, but also the risk of contracting diseases associated with intravenous drug use like HIV or Hepatitis. And once they're in the program and succeeding in their recovery, the changes start to happen, he said.

"Just by the virtue that they are here, they are safer, they are functioning, reestablishing family ties," Schoch said. "And that's before they taper off the medication."

The time line for that isn't standard — some patients may use the services at the center — regular medication, therapy and medical attention — for a year and a half, some could be there 10 years.

Some are referred by physicians, some by courts, friends or word of mouth. The intake process includes assessing their medical status and determining whether they are seeing other physicians. They sign papers agreeing to what is expected of them as a person in the program.

Doctors work with them to determine which drug would be best, the correct dosage and frequency of getting the medication. For methadone, it costs $16 per day and includes all of the counseling and associated medical treatment. In the OTP, patients come daily and behind a closed door with a nurse, are given their liquid methadone to take.

Others may get their doses once a week or work up to longer like once a month, but they have to prove that they are trustworthy and ready to not have daily supervision. Those with take home doses are required to come in at times to show they still have the same amount of medication they should, and all patients are given random drug screens.

"Our goal is to have the patient on just enough medication to suppress their withdrawal symptoms and cravings for illicit substances for a 24-hour period," Schoch said, adding that they take great precautions to limit the potential for abuse.

But opponents of such programs say they have concerns about increased crime in areas around centers, and say giving a patient one drug to help an addiction for another doesn't make sense.

New Albany resident Travis Watson said he sees the clinics as negative to both clients and communities.

"It merely takes the funds from the hands of the street dealers and puts it into the hands of legally state or privately owned dealers,'" he said in a text message.

"Methadone clinics and manufacturers are part of a billion-dollar industry that has spread to every city, making it much more profitable for people to continue with decades of treatment. With little to no alternatives being offered, those struggling with a opiate dependency are slowly but surely turned into lifelong consumers. They become shackled to methadone and, unknowingly trade one addiction for another."

McClelland, the drug czar, said that the medication helps those with addictions recover.

"It is extraordinarily difficult, many would say impossible, to recover from an opioid use disorder without treatment," he said. "If you accept the fact that opioid use disorder is a chronic disease, then staying on some type of medication to enable you to function is really no different than the concept of...a diabetic who requires insulin.

He said the state is determining where the next nine approved programs should be in the state, with the goal that one is within an hour of anyone who needs it.

"...It's being able to recognize this as a chronic disease that's affected the structure of the brain that's so important," he said. "That the good news is that it is treatable and recovery is possible."

He said that if the programs weren't available, "a lot more people would be dying."

Dr. Kevin Burke, retired physician and former Clark County health officer, recently attended a meeting at the statehouse of the Interim Study Committee on Public Health, Behavioral Health and Human Services. It was designed for lawmakers to get more insight into the state of the drug issues and treatment available before seeing where new legislation needs to turn. Both doctors presented at the meeting, along with others. Burke is a member of the committee.

Burke said he knows there is a certain population of people who, once exposed to opioids, may never be able to be abstinent without assistance.

Among the points he brought to the meeting are the need to mandate that MAT facilities have a relationship with the local medical community and hospitals — ideally having the medical director on the hospital staff.

He also wanted to help prevent neonatal abstinence syndrome, of which there are two or three cases a day in Clark County, be improved with birth control support for women in the MAT clinics.

The community, too, should be informed and able to be part of the decision on where a center is located — so people can address their concerns of crime, safety and traffic in their neighborhoods.

"I think it's critical that people have an opportunity to ask those kinds of questions," he said.

And in the size of clinics, he feels that there should be a mandated cap on how many people are served, to make sure that patients are not "lost in the shuffle."

He also wants to see regulations in place that allows physicians to see if their patients are in MAT programs, the same way they're able to track their prescriptions through a statewide database to help prevent overprescribing.

Rivera points to numbers from the Centers for Disease Control and Prevention that show that last year, there were 72,000 overdose deaths.

"If that's true, this is a continuing and enlarging trend," she said. "If we don't continue to provide care to these patients, it's just going to grow."

Rivera said she asks the clinic's counselors for updates on how the patients are doing in their lives, to quantify successes. In one recent survey, of 70 patients, around 60 were employed and 20 have had the same job during treatment. Of another survey of 57 patients, 49 were employed, nine reported having been promoted and 10 had launched businesses. Seven of 10 on that group had regained custody of their children.