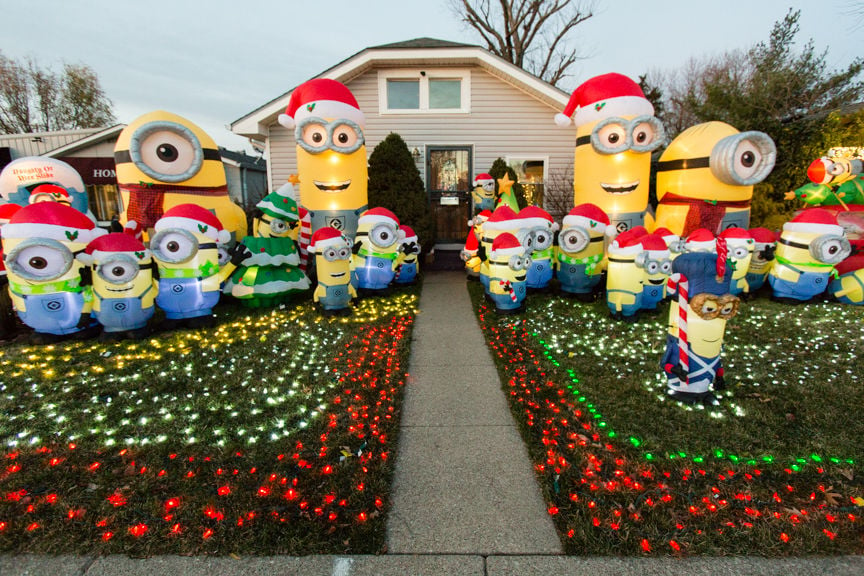 The walkway leading up to Michael Porteau's front door is surrounded by lights and Minions of all sizes. 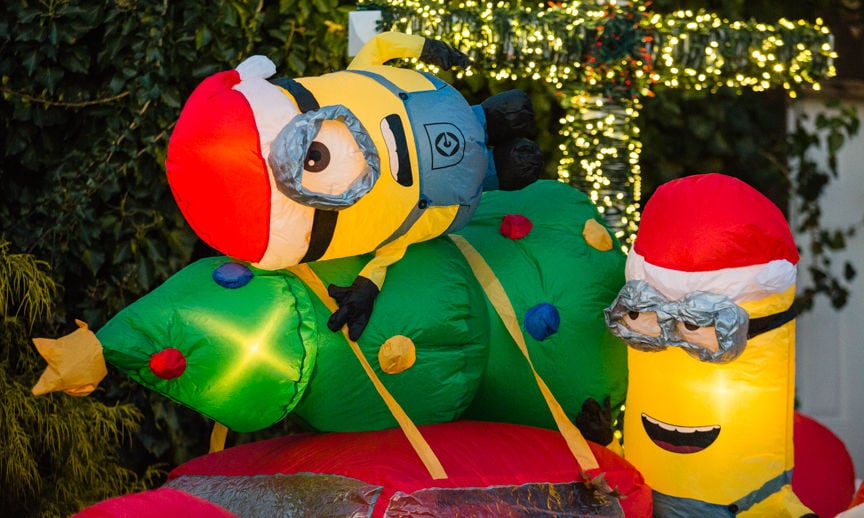 Two inflatable Minions —characters from the animated film "Despicable Me"— tie an inflatable Christmas tree to the top of an inflatable car in the front yard of Michael Porteau in New Albany. 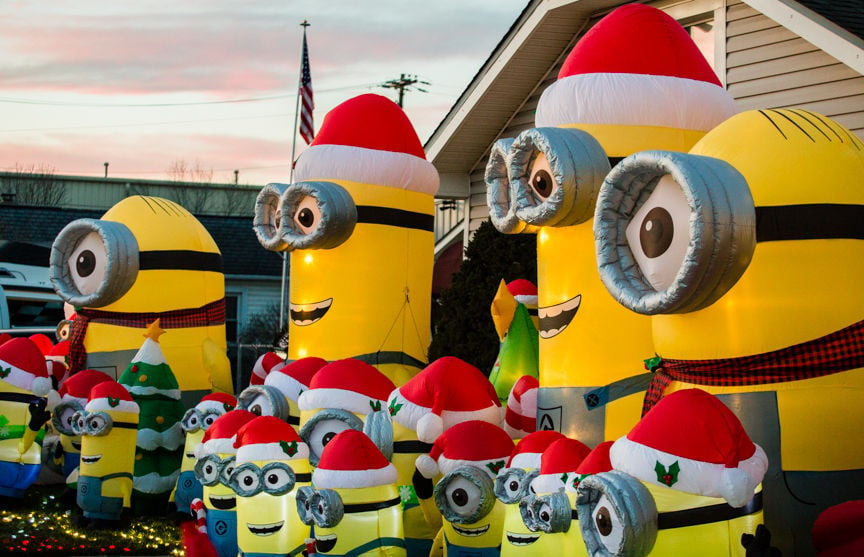 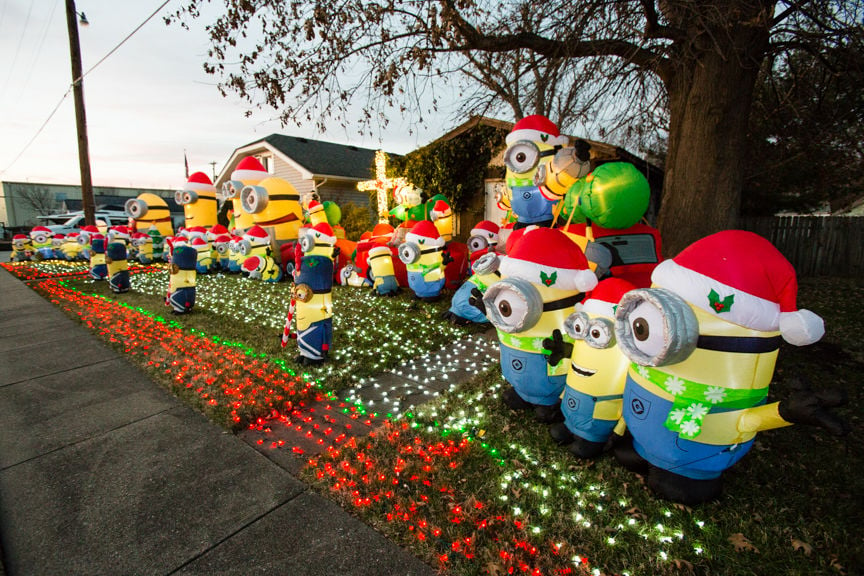 Michael Porteau spent around $3000 on over 40 Minions and lights to decorate his yard this season.

The walkway leading up to Michael Porteau's front door is surrounded by lights and Minions of all sizes.

Two inflatable Minions —characters from the animated film "Despicable Me"— tie an inflatable Christmas tree to the top of an inflatable car in the front yard of Michael Porteau in New Albany.

Michael Porteau spent around $3000 on over 40 Minions and lights to decorate his yard this season.

Almost 70 of the yellow characters, which were first introduced to the world in the hit children’s movie “Despicable Me,” fill the yard of married couple Michael and Anne Porteau and their son, Justin.

The smiling creatures, most of them wearing red and white Santa hats, stand in groups and swing from trees — two 11-foot sentries even stand guard next to the Porteau’s door at 2032 Indiana Ave.

While there are many homes throughout the Southern Indiana area decorated for Christmas, none are quite like the Porteaus’. On the street, tens of cars at a time have lined up to snap photos of the display. Still more people have parked their vehicles and walked up to the minions to get a closer to look or a selfie.

Michael sits inside, watching the craziness unfold from his security monitors, or he steps out into the fray to chat with the gathered crowd.

The Porteaus have been surprised by the attention their home has gotten.

The married couple have been decorating their home for the holidays since their first child, Johnathon, was born 20 years ago.

Each year, they put just a little more effort into it. Michael would place wire deer in the yard and string lights on the house and in the bushes.

“At the time, it was pretty big,” he said. It seemed like it was, anyway.

Last year, Michael stepped his efforts up once again. At the time, Johnathon, who lives next door to Michael, was engaged in a decorating war with the neighbors. One side would buy a new inflatable for their yard; the other would respond by adding their own.

Michael decided to show them both up by purchasing 20 minions for his own display.

He liked the devilish characters. They all looked the same, but you could arrange them in any way you wanted, and they would appear completely different from each other.

After last Christmas ended, Michael started hunting for more. He found tons of them on sale: a few at Home Depot, another batch at Lowe’s. Eventually, he accumulated the 70 or so he has now, spending around $3,000 in total.

Two weeks ago, he started arranging the display. It took him a few days, but soon, he had done it. Michael also made sure to install a lit-up, homemade cross within the minion mayhem; the Porteaus are Christian and Michael felt as if something was missing before he added the homage to Jesus.

“That’s what I do, you know,” Michael said. “I’d rather do for somebody than buy something for myself.”

But Michael still didn’t think his minion display would garner much attention. Until he saw a video of his home on Facebook posted by Old Town Store in Corydon.

Only a few hours later, the clip, which showed the videographer driving past Michael’s house with their phone pointed at the display, had racked up 20,000 views. By the end of the night, it had earned 40,000.

The popularity of the post has attracted some questionable comments — one person threatened to burn Michael’s yard. But the positives have still outweighed the negatives.

Michael’s favorite comment came from a mom who took her young, minion-obsessed son to see the display. Overjoyed by the setup, he proclaimed it to be the best Christmas present ever.

The News and Tribune staff has been hard at work to bring you the latest in Southern Indiana news this week. Catch up with our weekly roundup …

Southern Indiana residents light up the night with holiday decor.