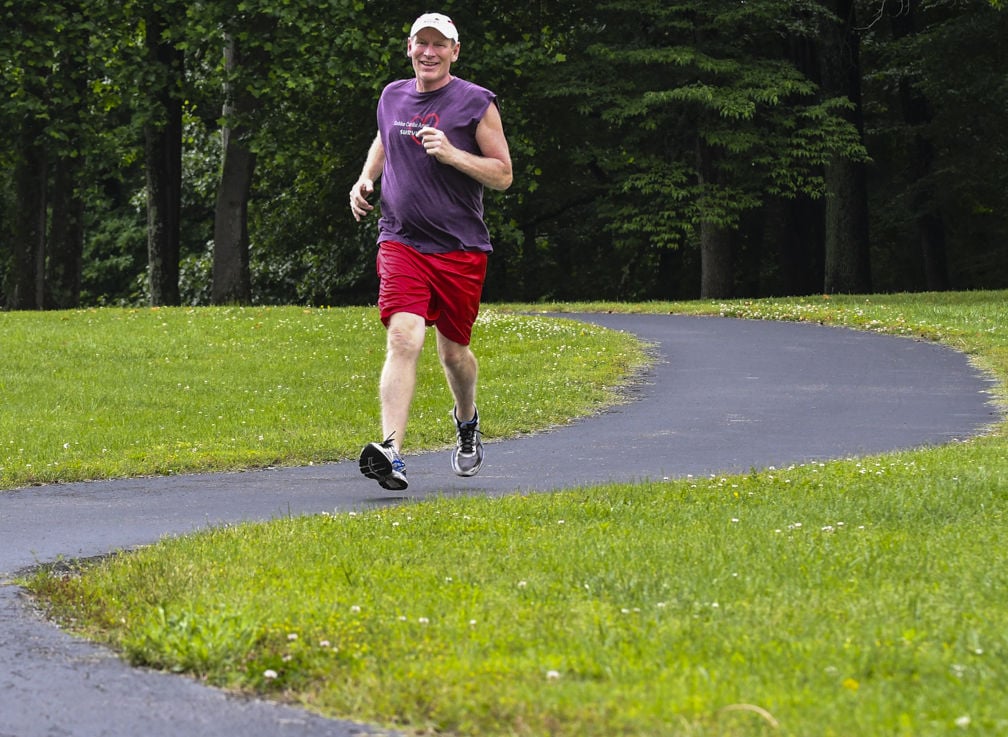 Bill Wells, New Albany, has accrued nearly 2,800 miles in over 100 marathons both national and international. After running the first 73 marathons, including three of the six World Major marathons in Boston, Chicago and New York, Wells was hospitalized from cardiac arrest while training in December 2014. Wells returned to running the following June, and completed the last three World Major runs; Berlin 2016 and both Tokyo and London in 2017. 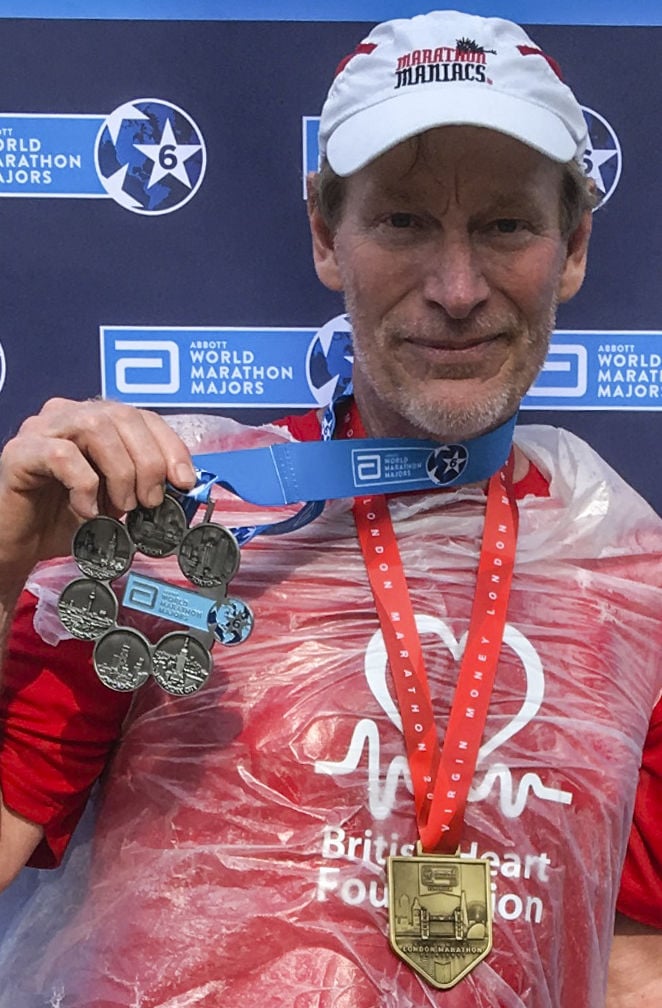 Bill Wells, New Albany, poses with his medals after completing the London Marathon in 2017. The London marathon was the sixth and final run of the six World Majors.

Bill Wells, New Albany, has accrued nearly 2,800 miles in over 100 marathons both national and international. After running the first 73 marathons, including three of the six World Major marathons in Boston, Chicago and New York, Wells was hospitalized from cardiac arrest while training in December 2014. Wells returned to running the following June, and completed the last three World Major runs; Berlin 2016 and both Tokyo and London in 2017.

Bill Wells, New Albany, poses with his medals after completing the London Marathon in 2017. The London marathon was the sixth and final run of the six World Majors.

In 2014, at the age of 57 and in the best physical condition of his life, Wells experienced Sudden Cardiac Arrest (SCA) while working out.

Around 4 a.m. on Dec. 11, 2014, Wells was on a treadmill at Planet Fitness in New Albany when he suddenly collapsed.

“They had to shock me four times,” Wells said. “I died four times.”

According to the Sudden Cardiac Arrest Foundation, an SCA is a sudden and unexpected pulseless condition attributed to cessation of cardiac mechanical activity. Blood stops flowing, the person collapses and is clinically dead.

“It’s not a heart attack,” said Wells’ longtime friend Michelle Baxter, an adult gerontology nurse practitioner on the faculty at University of Louisville and a member of Wells’ runners group. “His heart wasn’t pumping out. In his case it was probably viral.”

Wells and Baxter said they feel that God was watching out for him.

“He runs strange hours,” said Baxter. “He often runs at two or three o’clock in the morning. Just that year he had said he was tired of running out in the cold.”

He purchased a gym membership and took his morning runs indoors to escape the bitter cold.

“If it wasn’t for that he’d have been out in the street when it happened,” said Baxter. “If he’d been on his own he’d have died.”

“There’s only an 8 to 10 percent survival rate for out-of-hospital cardiac arrests,” Wells said.

“If CPR is not started within four minutes you risk brain damage,” Baxter said. “A lot of people, if they do come back, they aren’t the same. He’s exactly the same as he was before.”

“It is not a typical recovery,” she added. His ejection fraction rate – a measurement of the heart’s ability to pump blood from the heart – was at 20 percent. A rate under 35 is considered dangerously low.

“At 20 percent, you’re getting to the point where you need a heart transplant,” Baxter said. “He’s got it all the way back to normal through following his doctor’s orders. It’s not typical at all, regardless of age.”

Baxter has known Wells since 2009. She’s never treated him as a patient but has doled out lots of advice.

“He mostly ignores it,” she said with a laugh.

Hospitalized on a Thursday, Wells was released the following Monday evening.

“The first week I walked to the end of the block and back with a walking stick,” he said. “It took me forever.”

By March 2015 he was ready to complete a half-marathon.

The New Albany resident also carried a torch in the statewide relay celebrating the Indiana Bicentennial in 2016.

The London Marathon completed his bid to earn the Abbot World Marathon Majors medal, signifying his completion of six major marathons: Tokyo in 2017, Boston in 2008, Berlin in 2016, Chicago in 2009, New York City in 2013, and London.

Wells started running in 1998, although he did run cross-country and track at Floyd Central High School.

“I lived an unhealthy lifestyle,” he said. “I smoked and drank.”

Although his SCA was not caused by an unhealthy lifestyle, he reminds people that if he had been unhealthy his outcome would probably have been quite different.

“If I hadn’t been in the shape I was in I wouldn’t be here today. I quit drinking, quit smoking, ate vegetarian, cut out sodas — regular and diet — and yet I’m in there hanging on for dear life at the hospital.”

Today he runs with a pacemaker, just in case of another incident.

“I don’t push myself as hard,” he said. “I feel like I’ve got an edge. I call it my guardian angel.”

Wells recently applied for a position with Medtronic Global Heroes, a program for runners who benefit from medical technology. They compete in the Medtronic Twin Cities Marathon or Medtronic TC 10 Mile in Minneapolis in October.

Baxter wrote a letter of recommendation for him.

“I talked about his tenacity and how we feel like there’s a higher power at work,” she said.

Runners from 34 different countries have participated since the program’s founding in 2006.

“I’m hoping they’ll pick me for that,” Wells said. “I’m very blessed to still be able to do what I do.”

As he has for years, Wells works as a laborer at American Beverage Marketers in New Albany.