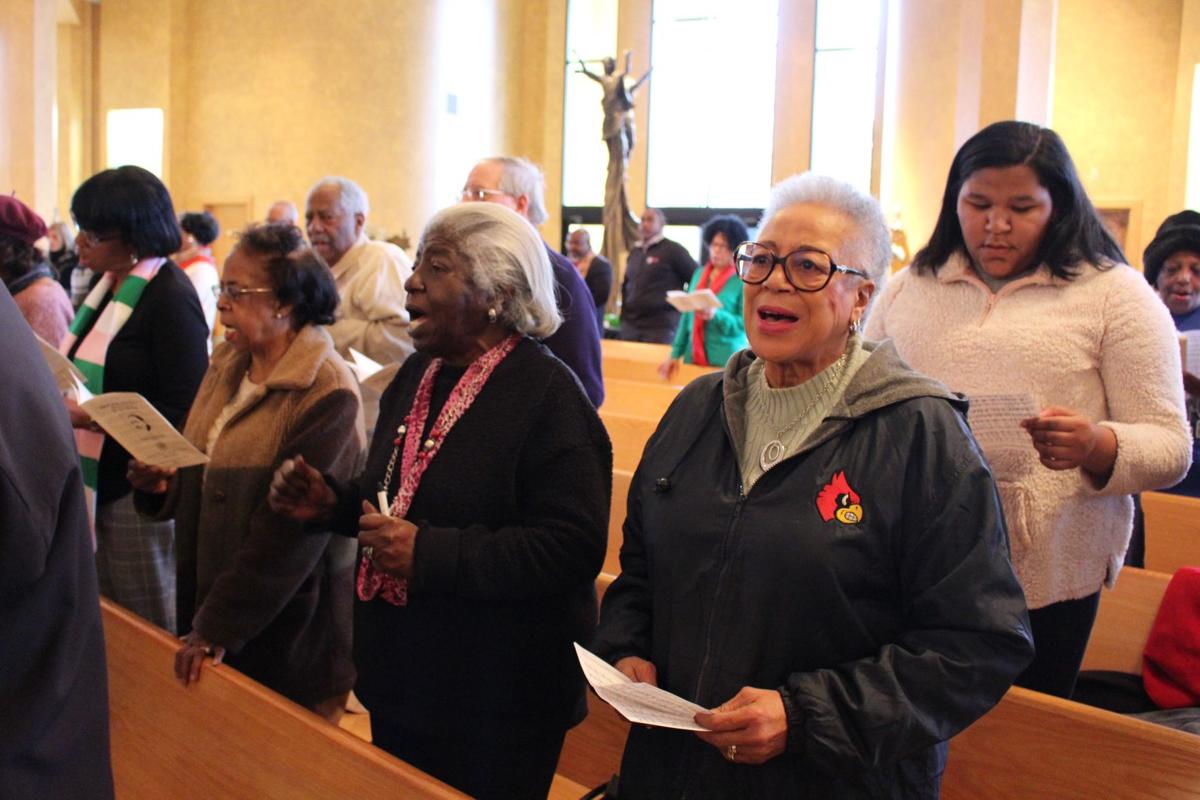 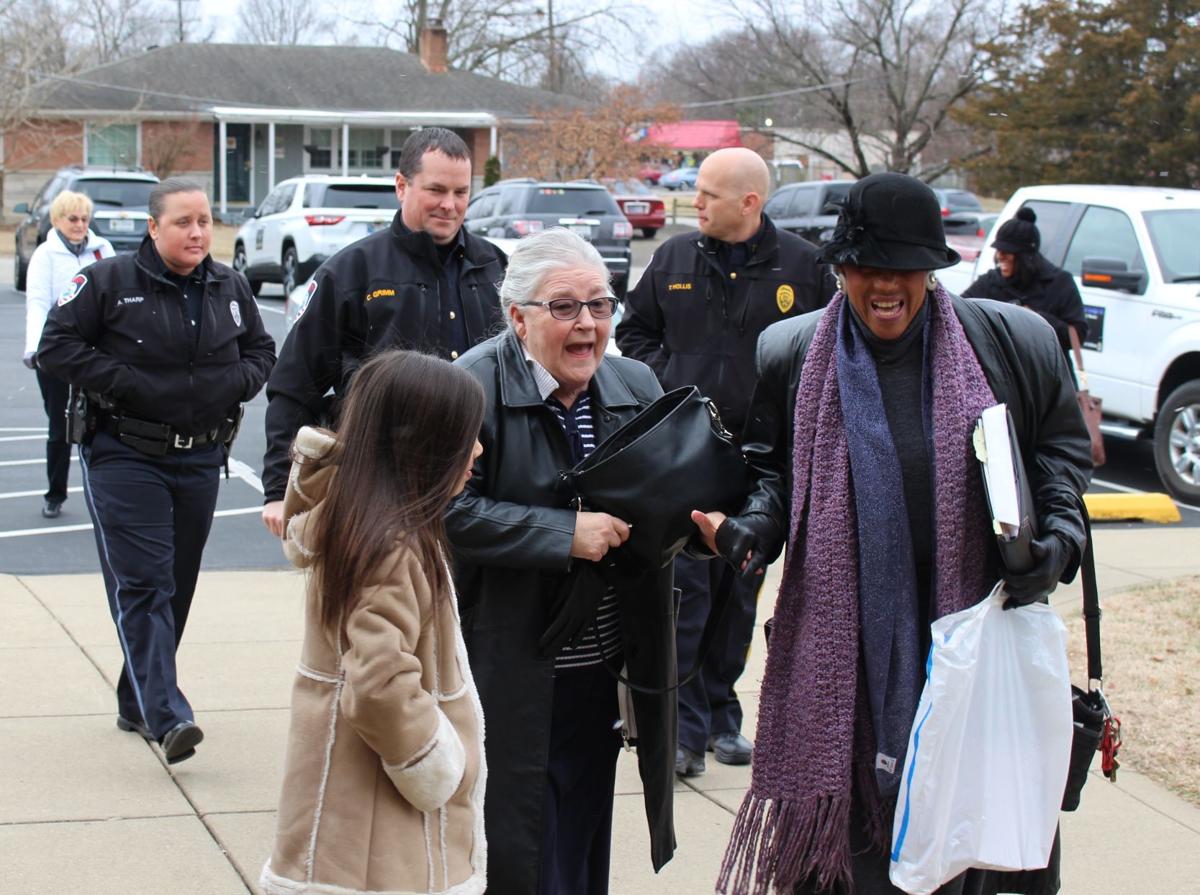 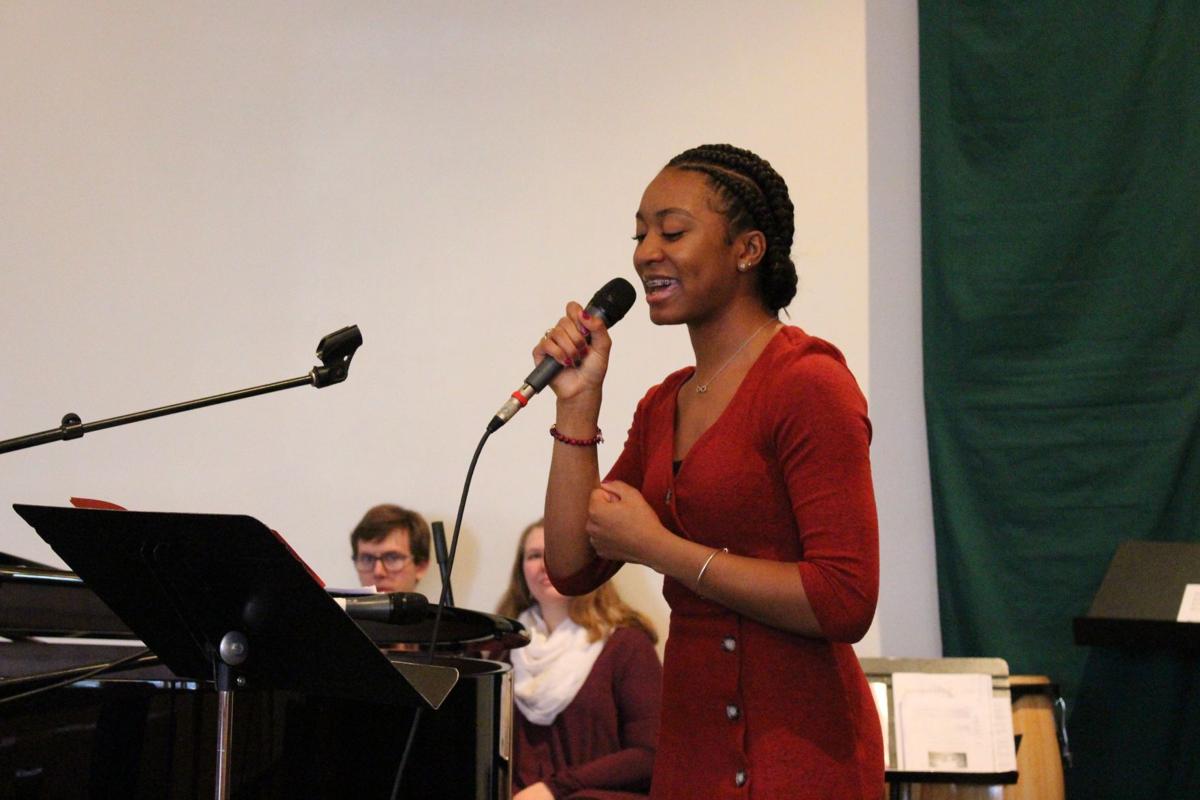 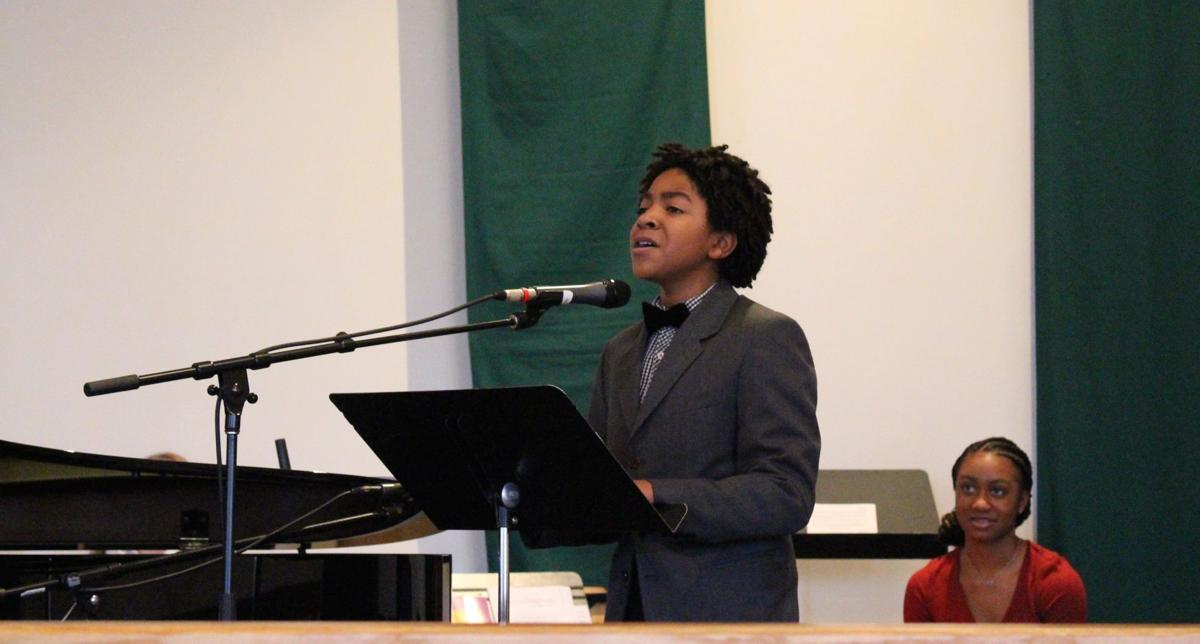 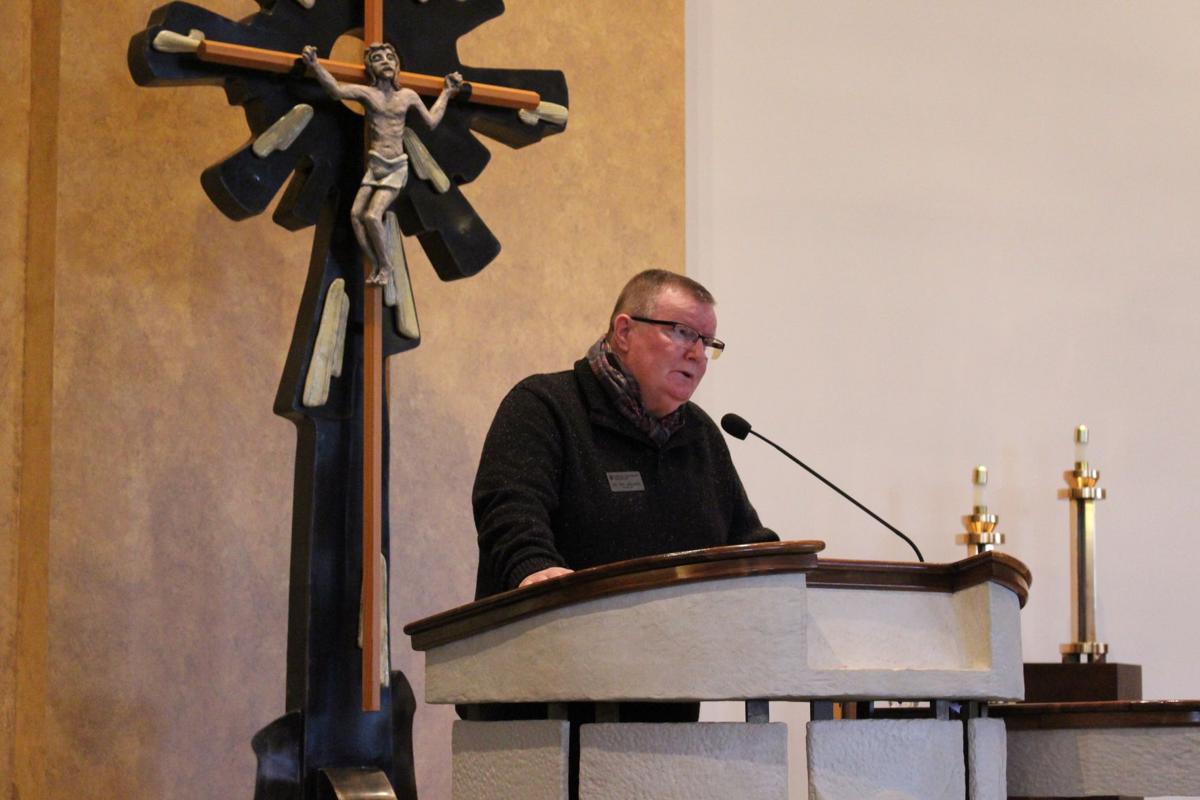 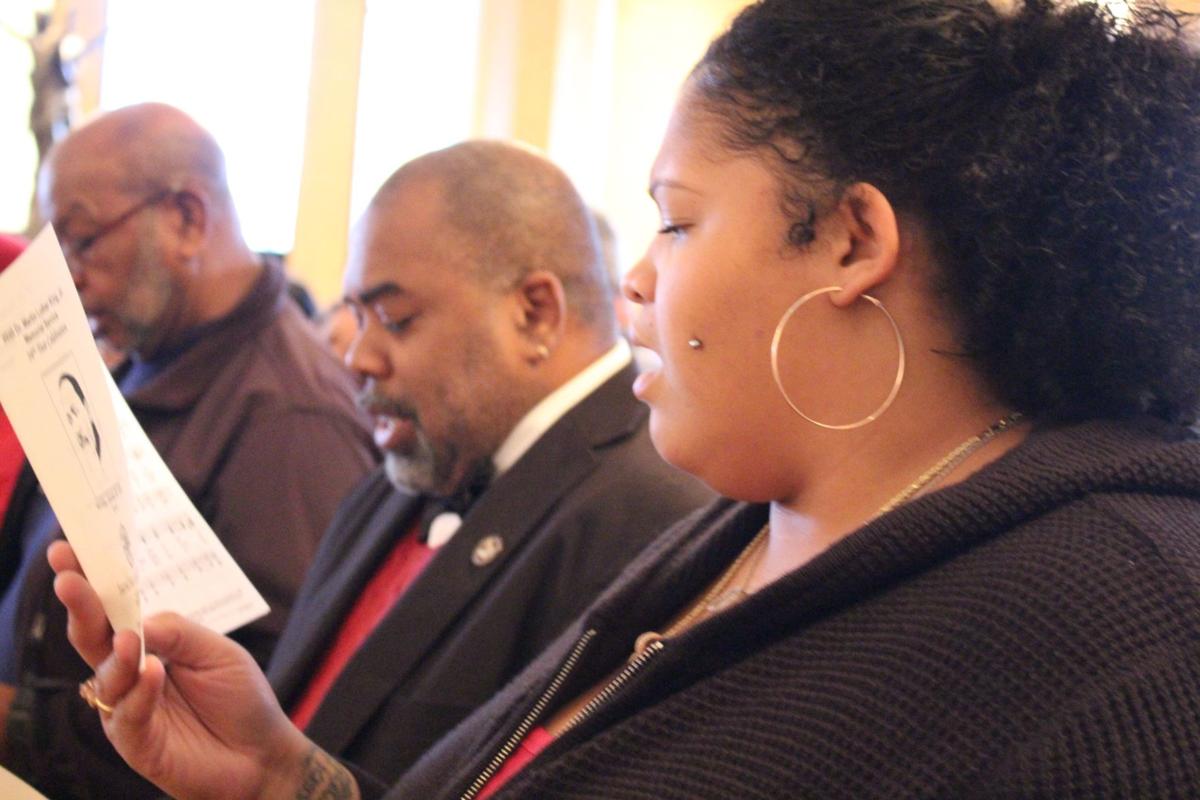 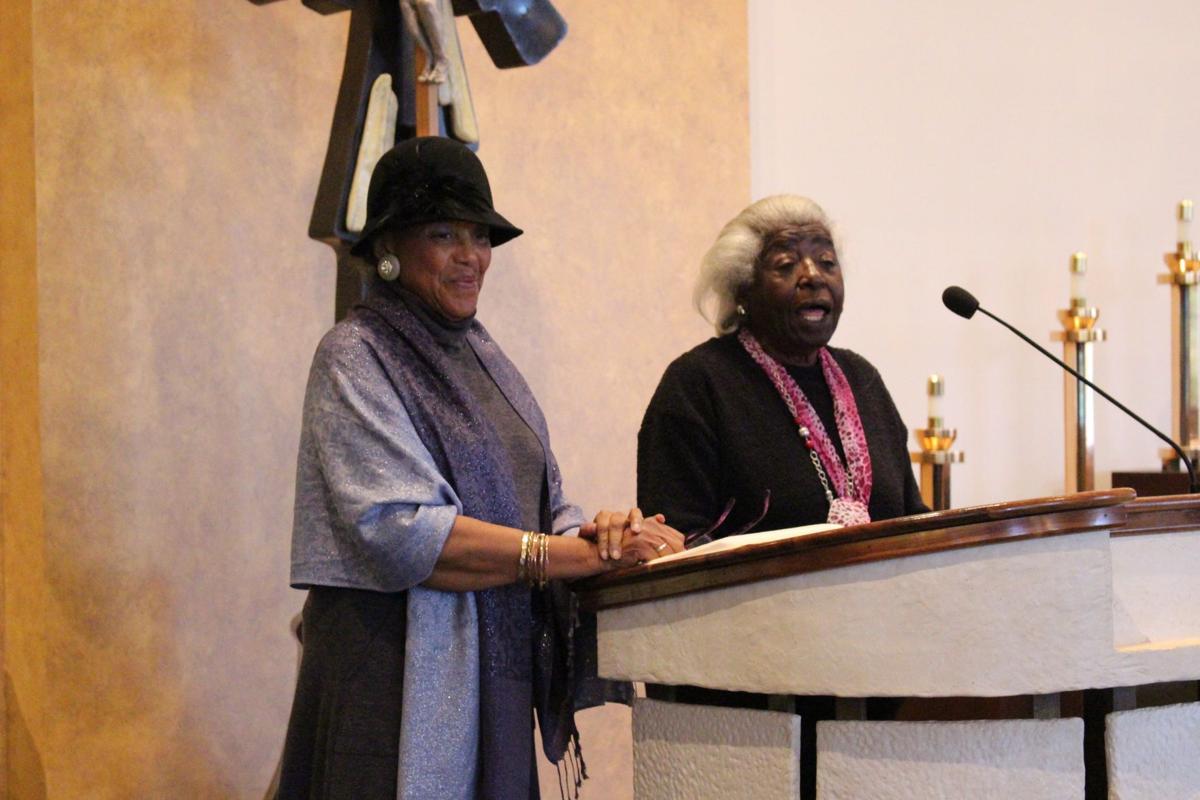 Flora Clipper, speaking, was this year's 2020 Freedom and Justice Award winner. Given by the mayor's office, the award was presented Monday by Janice Leavell, left, chair of the 2020 Dr. Martin Luther King Memorial Service committee.

Flora Clipper, speaking, was this year's 2020 Freedom and Justice Award winner. Given by the mayor's office, the award was presented Monday by Janice Leavell, left, chair of the 2020 Dr. Martin Luther King Memorial Service committee.

JEFFERSONVILLE — Dozens braved the icy cold Monday to remember a man whose influence to strive for peace, justice and equality has spanned decades and continents.

The 2020 Dr. Martin Luther King Jr. memorial service was conducted at Sacred Heart Catholic Church in Jeffersonville, after a motorcade of attendees traveled there from City Hall at Quartermaster Court.

"We need that and it's not talked about enough."

The program included solos by NAACP youth members Kyndia Motley and Chase Phillips and awarding of annual scholarships and the Jeffersonville office of the mayor 2020 Freedom and Justice Award. Greater Clark County School students who won poster and multimedia awards for the pieces they created celebrating King also were recognized.

IU Southeast Chancellor Ray Wallace delivered in his keynote a fresh perspective on how the world has been influenced by King's work. Before moving to the United States nearly 40 years ago, Wallace grew up in Northern Ireland, during a time of great strife and violence between Catholics and Protestants.

He recalls the separation — the groups did not play the same sports, walk the same routes, attend the same functions. He also recalls the discrimination his Catholic family experienced; his parents were unable to secure public housing, and his brother was fired from jobs when employers found out his religion.

But Wallace saw how King fought for freedom during the U.S. civil rights movement. It was an immense inspiration to those in his own country fighting for their rights, as well.

"His words had legs," Wallace said. "We believed in the words of Dr. King; we believed in inclusivity, not exclusivity.

"This is a celebration of one of the finest Americans we have ever seen in the world. I am forever grateful for his struggle for my freedom."

Following the service, Flora Clipper, who was presented with the 2020 Freedom & Justice Award, said Wallace's stories opened her eyes to how the world may have viewed King.

"It was a learning experience; that's the thing about it — there's so much to learn," Clipper, who just turned 97, said. "That's one of the things that it meant to me today, to know the worldwide influence that Martin Luther King had."

Younger attendees said they, too, respected the work of the man who helped pave the way for more freedom and equality.

Motley, one of the two NAACP youth members who sang solos during the program, said, "If it wasn't for him, I wouldn't have the diverse friends I have, I wouldn't be able to be in the classroom and have such a high education or be respected.

"He made people who don't like me see a different perspective on who I am. So I thank him for that always."