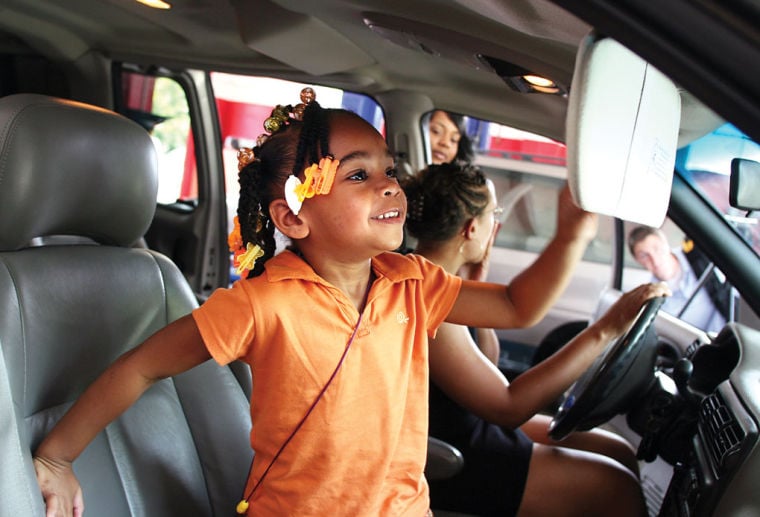 Five-year-old Bréasia Hite checks out the vanity mirror in the 1999 Oldsmobile Silhouette minivan given to her mother, Jill Pryor, Wednesday in Sellersburg by Christian Auto Repairmen Serving (CARS) of Southern Indiana. The group has helped about 60 women in its year of existence. Staff photo by C.E. Branham 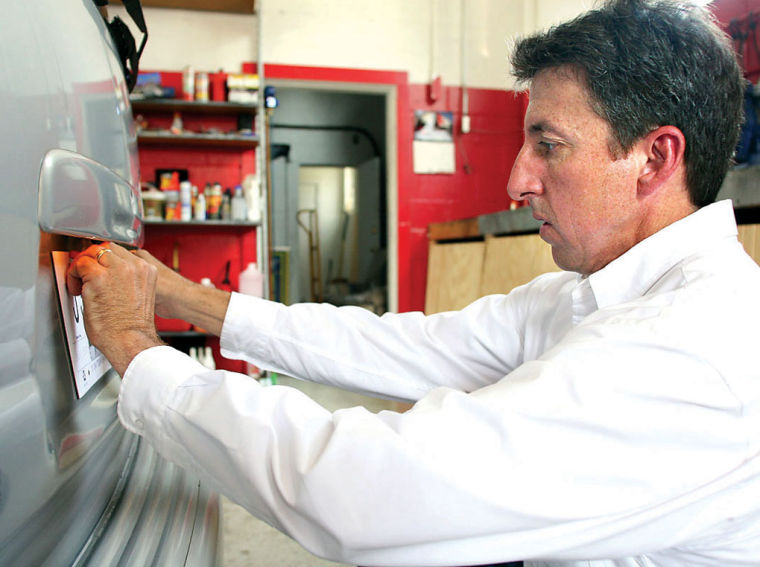 Kevin Williar, one of CARS' founders, puts the liscence plate on the donated van. staff photo by C.E. Branham

Five-year-old Bréasia Hite checks out the vanity mirror in the 1999 Oldsmobile Silhouette minivan given to her mother, Jill Pryor, Wednesday in Sellersburg by Christian Auto Repairmen Serving (CARS) of Southern Indiana. The group has helped about 60 women in its year of existence. Staff photo by C.E. Branham

Kevin Williar, one of CARS' founders, puts the liscence plate on the donated van. staff photo by C.E. Branham

Five-year-old Bréasia Hite plopped down onto her knees in the minivan’s front seat, grabbed the steering wheel with both hands and flashed a bright smile over at her mother. “Do you like it?” 23-year-old Jill Pryor asked her daughter from the van’s passenger seat, to which Bréasia shook her head “yes” ferociously. The two, along with Pryor’s 2-year-old son Darius, on Wednesday afternoon were given a 1999 Oldsmobile Silhouette, which was fixed up especially for them by Christian Auto Repairmen Serving (CARS) of Southern Indiana. The organization — which this month celebrates its one-year anniversary — partners with Louisville’s Project Women to provide reliable vehicles to single mothers. Pryor is one of 60 women the organization has aided since its inception. “They can help anybody,” Pryor said excitedly of Project Women and CARS. “I’m just so glad they’re helping me.” Pryor — who lives in Louisville with her two small children — will graduate in September with an associate’s degree in pharmacy technology from Daymar College and then will begin University of Louisville’s prepharmacy program in January. She hopes to attend Sullivan University’s pharmacy program after graduating from U of L. But getting to and from classes as well as getting her children to and from school and day care was putting a large strain on her. “Their support has just been astronomical,” she said from the front seat of her new van at CARS workshop in Sellersburg. “This has been such a big support. “They kept asking me what kind of vehicle I would want,” she continued. “I told them if it had wheels and a steering wheel, it would be just fine. It could have been dooty green, and I still would have been ecstatic.” Pryor supports her small family by working as a cashier at a Louisville convenience store and also participates in one of Daymar College’s work-study programs. She said Project Women’s assistance has allowed her to continue her studies by providing both financial and emotional support. “If they see you making the effort, they will help you do it, whether it be by helping you get food or school supplies,” she said. “They have so many resources and are connected with so many people. “They’ll encourage you and you can go a little bit further. Then they’ll encourage you again, and you can go a little bit further. I figure I can’t go wrong if they’re going to stick with me through the whole thing (education).” One of CARS’ founders, Kevin Williar, said the organization partnered with Project Women to ensure their generosity would benefit those in the most need. They also work with area homeless shelters as well as New Albany’s St. Elizabeth’s Maternity and Adoption Services. The organization accepts donated cars from the public, then either fixes them up to use as giveaways or sells them in order to purchase parts or pay their rent. “It has been indescribable, just awesome to see how God has used us to help people, to see his work is just overwhelming,” said Williar — who also serves as a guest services minister at Northside Christian Church in New Albany. “Our team effort with God at the center has really blessed what we’re trying to do. Plus, giving a car to someone can bring about such life change for that person.” Cathe Dykstra, Project Women’s executive director, said the nonprofit organization was started 12 years ago to help the region’s single mothers who were working toward completing a college education. They quickly realized transportation was one of the biggest deterrents those single mothers experienced. “These mothers are constantly faced with transportation issues, whether it be getting to school, work or getting the children to day care,” Dykstra said. “This partnership with CARS gave us the opportunity to help these families with their transportation needs with donated cars.” Pryor said she couldn’t wait to put her new van to use and, again, expressed gratitude toward the two organizations that have helped her and her family so much. “They bless me, and I can in return bless my children,” she said. “I wish more people would do these things so more people could be helped.”