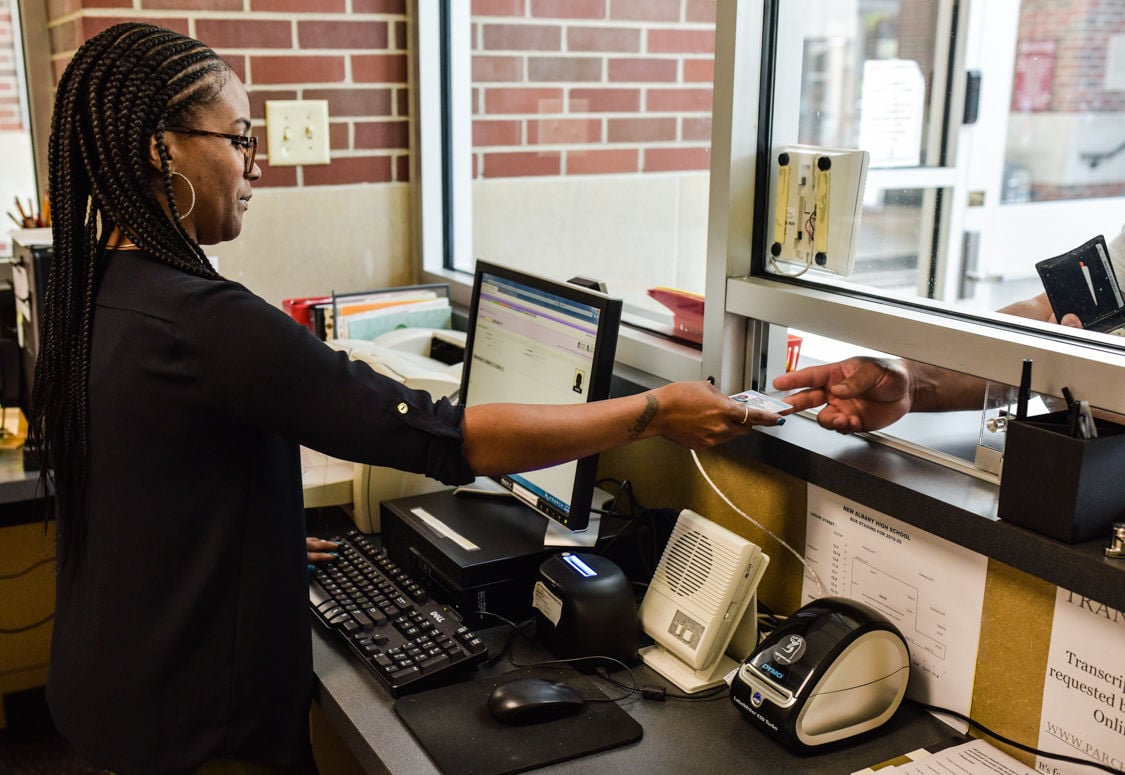 Receptionist Dacia Wright receives an identification card from a visitor to process through the school's check-in system before picking up their child from New Albany High School. 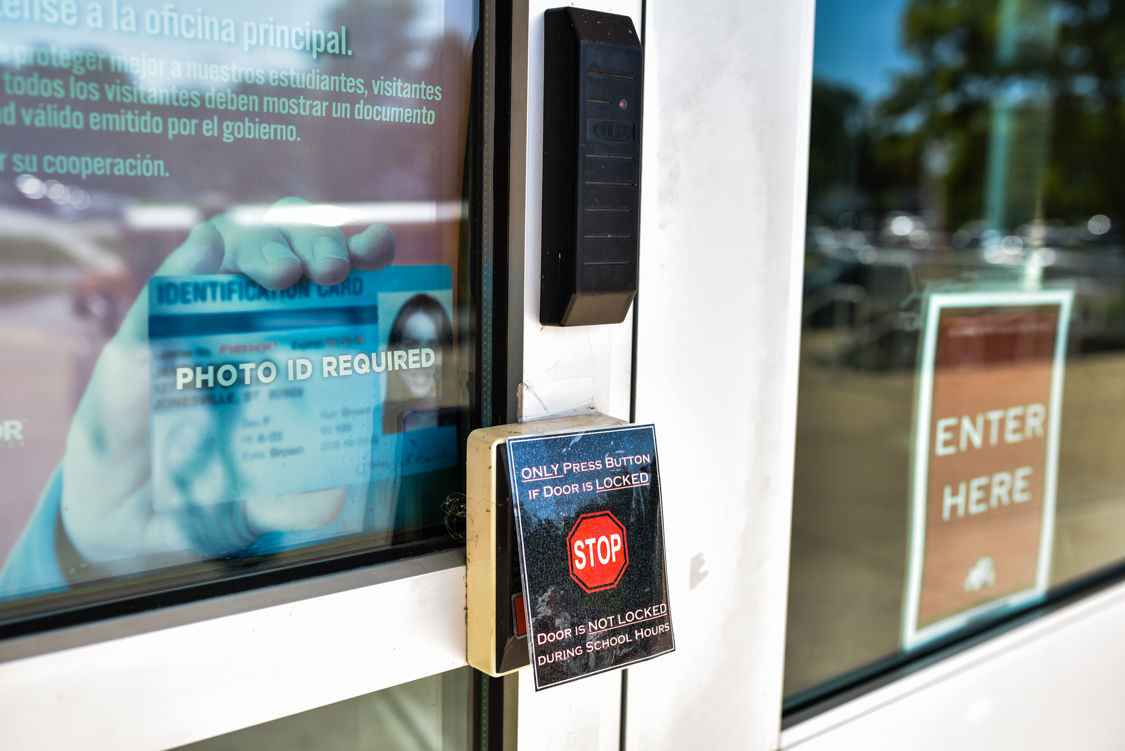 Signs on the doors at the main entrance alert visitors of the need for photo identification to gain access within the school. 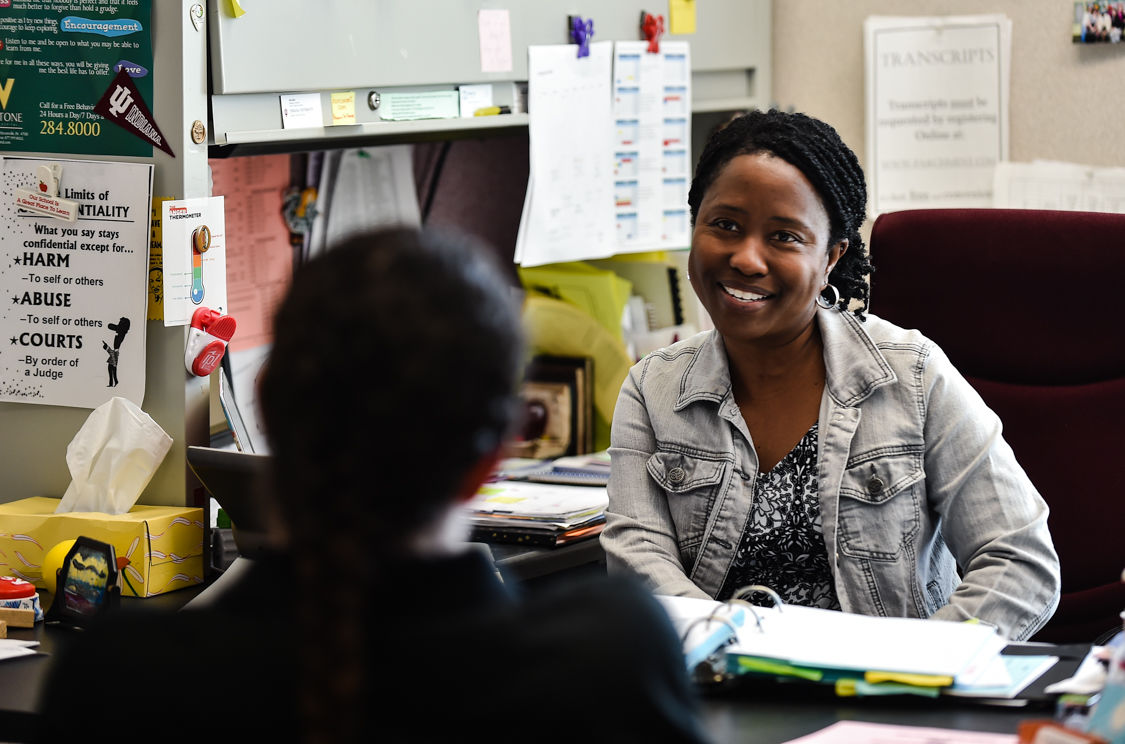 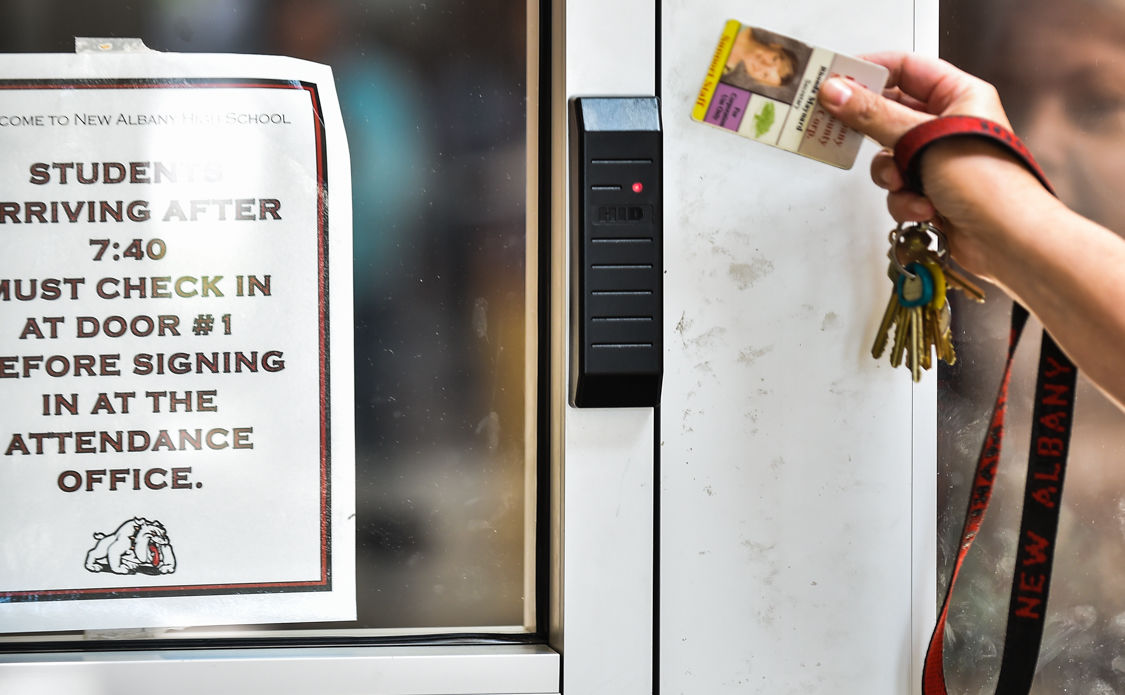 Receptionist Dacia Wright receives an identification card from a visitor to process through the school's check-in system before picking up their child from New Albany High School.

Signs on the doors at the main entrance alert visitors of the need for photo identification to gain access within the school.

FLOYD COUNTY — A new law is allowing New Albany-Floyd County Consolidated School Corp. to think outside the box in order to keep students and staff safe.

The catch — it comes at a price, paid by the taxpayers.

The NAFC school board met recently to discuss the possibility of pursuing a school safety referendum, which — if approved for the maximum of 10 cents per $100 of assessed valuation over the course of eight years — would open up $3.33 million per year to make schools safer. If they go forward, they will be among the first in the state to take advantage of a new law, which went into effect in July. If passed, the funds would be able to be used for additional school resource officers, counselors, staff training, cameras and more.

After the meeting, Superintendent Brad Snyder said he expects the board to move forward with putting the referendum on the ballot in the spring Primary Election. He said the question is whether they will ask for the maximum allowed amount or request something less.

“This isn’t something I relish doing, but I think it’s the right thing for kids,” Snyder said of having to ask the taxpayers for additional funds. “Society has changed and we need to change with it.”

This isn’t the first time NAFC has asked the public for help. In 2015, a referendum seeking roughly $80 million to renovate and replace schools in Floyd County was denied. NAFC tried again in 2016, asking for $87 million to renovate nine schools, including two complete rebuilds. That was approved.

Snyder said right now, the district is having to spend educational dollars on safety measures. He said a Lilly grant of $1.13 million has helped the district expand on security measures, by adding mental health therapists in 14 schools, two college and career readiness coordinators, professional development for staff, hiring additional social workers and more. That grant runs out in 2021. If a referendum is approved by the public, those funds would help continue what the Lilly grant funded and expand upon it, by increasing mental health services and adding additional building security.

During the meeting, Snyder told the board that 350 students have received mental health treatment at school, due to the grant.

“If it helped in one case, that’s a big deal,” Snyder said.

If the referendum moves forward at the maximum amount, Snyder would like 70 percent to be earmarked for social-emotional improvements, including therapists, social workers and staff training. The rest would be to “harden and protect,” he said. That would include having a safety director and office, more cameras, additional fencing, door improvements, additional school resource officers, expanding security technology and more.

“I do think this is something a lot of districts are going to have to consider,” said Pat Terrell with Winston and Terrell Group.

The NAFC board was asked by Snyder to consider hiring Terrell’s company for $25,000 if the board decides to pursue the referendum. If hired, Terrell would be in charge of the public relations surrounding the referendum. He said he has helped schools with 47 referendums in the state, winning 41, including NAFC’s in 2016.

“Eight out of 10 registered voters don’t have a kid in school,” Terrell said. “[Our] goal is to remind people the importance of school to community and property values.”

Board member Rebecca Gardenour proposed asking for an amount less than the maximum to get more voters on board. Board President Elizabeth Galligan disagreed.

Snyder said the next step is to hire a public relations company, who would help garner community support. He said he will likely ask the board to approve hiring a company during the Sept. 16 board meeting. Once that is done, the board and company will work together to determine the amount of tax dollars they will seek. Snyder said the board will also be asked to hire someone to assist with legal needs that arise as well.

“It’s unfortunate that the solution to student safety is at the local ballot box,” Snyder said, referring to voters deciding whether to pass a referendum. “[I wish] there were other revenue sources, but there’s not. The only recourse we have is to ask the local taxpayer if they are willing to do this for kids.”

"I think safety does have to be something we continue to amplify and work toward for our students," said Jenny Higbie, NAFC board vice president. "I think additional discussions are warranted."

OTHER DISTRICTS VOICE IN:

WHAT CAN THEY BUY?

The new law allowing schools to pursue a school safety referendum has rules guiding how the money can be spent. Schools can use school safety money to:

• purchase equipment to improve the safety of a school building, grounds or buses.

NEW ALBANY – The New Albany-Floyd County Consolidated School Corp. is finishing up an $87 million capital project, thanks to the approved 2016…

Pauline Parsley, 91, passed away Friday February 21, 2020 at the Rolling Hills Healthcare Center. She was the former Pauline Barton, born in Grayson County, KY., and was an Inspector at the Pillsbury Company for over 31 years. She loved traveling to Florida, where she was an avid Bingo playe…

Beverly Elaine Pooler, 70, passed away peacefully at Norton's Hospital, surrounded by her loved ones. Beverly was born to Homer and Faye Pooler on September 22, 1949, in Jeffersonville, Indiana. She graduated from Silver Creek High School in 1967. Beverly was a loyal and valued employee of C…