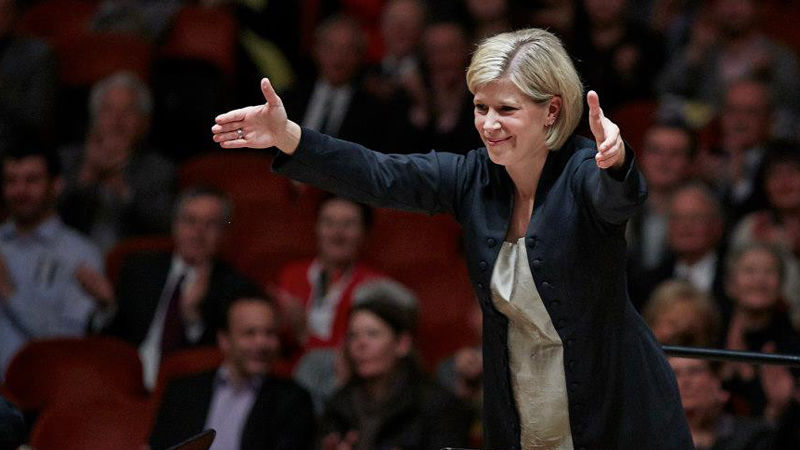 Karen Kamensek is a renowned conductor of opera and orchestra who grew up in New Albany and graduated from New Albany High School. She is now a renowned guest conductor who travels across the United States and Europe. Photo credit: Benno Hunziker, https://www.karenkamensek.com. 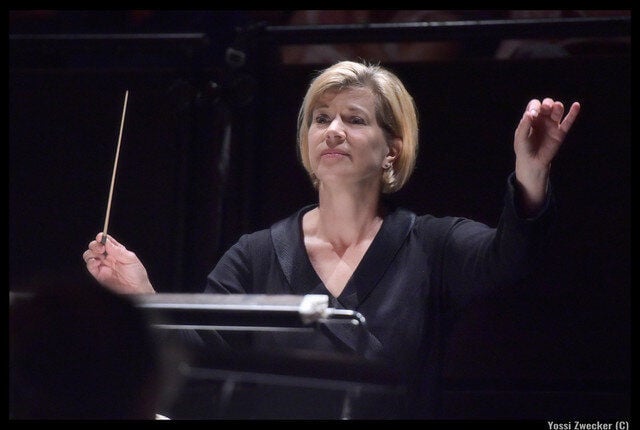 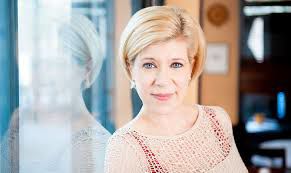 Conductor Karen Kamensek, who grew up in new Albany, credits some of her early teachers with helping her achieve success. Submitted photo from https://www.karenkamensek.com.

Karen Kamensek is a renowned conductor of opera and orchestra who grew up in New Albany and graduated from New Albany High School. She is now a renowned guest conductor who travels across the United States and Europe. Photo credit: Benno Hunziker, https://www.karenkamensek.com.

Conductor Karen Kamensek, who grew up in new Albany, credits some of her early teachers with helping her achieve success. Submitted photo from https://www.karenkamensek.com.

NEW ALBANY — Karen Kamensek knew she wanted to become a conductor since she was 11 years old, and as a kid, she would often watch broadcasts from New York City's Metropolitan Opera on television.

As she grew up in New Albany, she consistently pursued her passion for music, and over the past few decades, she has become a celebrated conductor of opera and orchestra.

Today, the New Albany High School graduate leads major operas and orchestral performances across Europe and the United States. In November, Kamensek, 49, made her Metropolitan Opera debut with the Philip Glass's opera "Akhnaten," which concluded its run Saturday.

Kamensek's musical training started early. She was born in Chicago and began playing piano at age 4. Her family moved the next year to New Albany, where she attended Mount Tabor Elementary School. Kamensek started playing violin, and one thing led to another, she said.

"When I started on violin, I was 8 and could already read music," she said. "I was telling the other kids in the orchestra class what they were doing wrong. So I think in order to save me, [my music teacher] put a drumstick in my hand and said, 'you’re going to beat time.' I was like, this is a really dumb thing, but then he said, 'you have the temperament to be a conductor, you’re going to be a conductor.' That really sowed the seed in my head."

For Kamensek, her time in public schools in New Albany helped her grow as a young musician, and she describes the school system's string programs as "a treasure chest." Starting in elementary school, music was part of her daily life; she continued performing in programs at Scribner Middle School and NAHS. She sang and performed piano accompaniments in the high school choir, and she performed in both her schools' orchestra programs and the Floyd County Youth Symphony.

She was about 13 when she first visited the Metropolitan Opera on a trip with the youth orchestra. The group saw a variety of shows in the city, including an operatic performance at the famous New York City institution. She would later write a "cheeky" essay about her experience.

"I said, 'the next time I come back to the Met, I’m going to come back through the stage door,' so it must have been a dream from an early, early age," she said.

Linda DeRungs, retired NAHS choral director, has many fond memories of working with Kamensek. Her former student was an extraordinary musician from the start, DeRungs said, and they "latched onto" each other. The retired teacher had just started working at the school when she began teaching Kamensek.

Kamensek was adventurous and precocious as a young musician, DeRungs said, and she was impressed with the teen's sophisticated musical abilities. They worked together frequently, and for school musicals, she would perform in the pit orchestra as DeRungs conducted.

"I learned a lot from her," DeRungs said. "Hopefully she learned something from me —I don’t know — but I gave her every opportunity I could in high school."

Joanna Goldstein, a professor of music at Indiana University Southeast, was one of Kamensek's piano instructors as a teenager. She remembers working on advanced repertoire with the talented student, and although Kamensek was serious about the piano, she was already showing her passion for conducting.

"I'm delighted that she made a success for herself and is doing this big Met debut," Goldstein said. "I think it says a lot both for her abilities and her perseverance."

Kamensek recalls that she was a "horribly shy kid except when it came to music." She was always practicing music and taking on many endeavors, and she is grateful for the guidance she received from her teachers as a student in New Albany, she said.

"I was kind of a little weird kid with a professional mindset for music when I was young," she said. "Without those teachers, I don’t know, I might have gotten lost in the fray or something."

HER CAREER TAKES OFF

After graduating from New Albany High School in 1987, she attended Indiana University's Jacobs School of Music, where she received degrees in orchestral conducting and piano performance. She was introduced to the music of Phillip Glass at IU, and she fell in love with the music immediately, she said.

At age 19, she met the famous composer when Dennis Russell Davies, a conductor she was assisting at the university, introduced them. It was the beginning of a long musical partnership, and over the years, she has worked with Glass on a diverse array of projects. He is both her friend and mentor.

Like many musicians, Kamensek struggled for a while in New York City. She got a job assisting acclaimed conductor Simone Young on several projects, and eventually, she conducted the opera "Don Giovanni" at Vienna's Volksoper. She was soon offered the job of resident conductor at the Vienna opera house, and it was the beginning of a long career in Europe.

For five years, she served as music director and chief conductor at the opera house in Hanover, Germany, between 2011 and 2016. Now, she has a busy schedule as a critically-acclaimed guest conductor with an extensive repertoire.

"I talk to a lot of European people as well, and they generally have to leave their country to become successful, and the Americans find that, too," Kamensek said. "Many of us have to leave the United States to come back at some point. I don’t know if that’s a general global culture thing where you have to do that — you can see it across the board in a lot of things."

DeRungs has followed Kamensek's career over the years, and she has watched her conduct performances in places such as Vienna, Copenhagen and San Diego. She recently watched as the Metropolitan Opera's "Akhnaten" was broadcast live in cinemas. She describes her as "brilliant conductor" who is "cool under pressure."

One of the most touching moments as an educator was her first trip to Vienna to visit the young conductor. She was observing a rehearsal with a chorus for an opera, and as Kamensek spoke to the ensemble, the conductor told the ensemble about her former teacher.

"I have so much trouble saying this, because I almost cry — [Kamensek] said the nicest thing that any student has ever said to me in all my years of teaching," DeRungs recalled. "She said, 'what I just told [the ensemble] is that Linda is one of my former music teachers, and she's one of the reasons I'm standing here today.'"

Kamensek expressed her appreciation for the support of her teachers throughout the years, including those who were involved in her early training as a musician growing up in New Albany.

"Being a musician is kind of like being an athlete — you need a team of people around you to kind of build you up, and we seek recurring contact with people that we trust," she said. "So I've kept in touch with so many of my teachers, even from elementary school and junior high school."

She has reached one of her major bucket list items with the production of "Akhnaten" in New York City. But that's not the only reason her recent debut is significant — according to a Dec. 5 article from the New York Times, Kamensek is only the fifth woman to conduct at the Metropolitan Opera.

Although she has remained calm and focused for the opera, she and her colleagues have been "a bit giggly" with their happiness about the performance, which has been popular with audiences. She is happy to have realized a dream she's had since childhood, she said, but these days, her dream has become the next step she is taking.

"I imagine [Saturday] when I get on the plane, I’m going to have a glass of champagne and say, ‘wow, you did it'...I haven’t really allowed myself to go to that ultra happy place yet and say, 'wow, you did it. And with any bucket list thing, with any dream that’s come true, then you’re like, now what?"