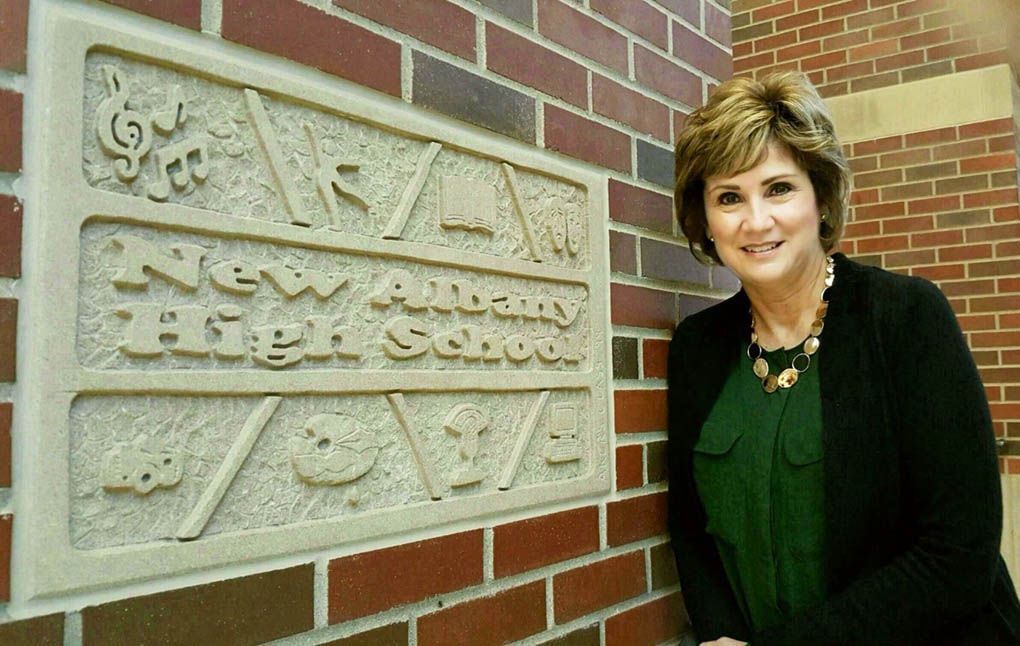 Laura McGuirk, academic counselor at New Albany High School, is retiring at the end of the school year after 22 years. 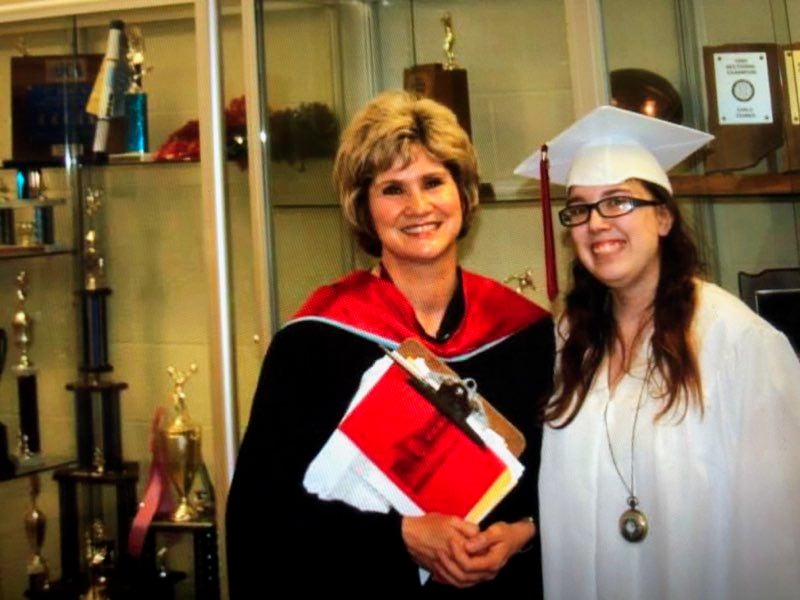 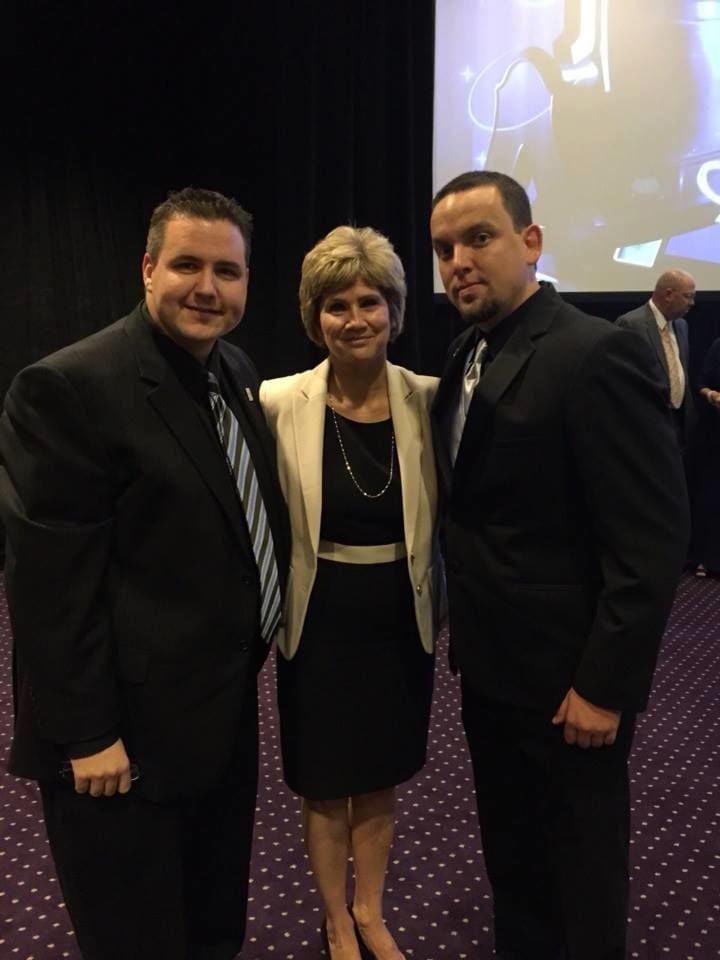 New Albany High School senior counselor Laura McGuirk is pictured with former students Joe Glover and Eddie Bobbitt in 2014. McGuirk is retiring at the end of the school year after more than two decades at the school.

Laura McGuirk, academic counselor at New Albany High School, is retiring at the end of the school year after 22 years.

New Albany High School senior counselor Laura McGuirk is pictured with former students Joe Glover and Eddie Bobbitt in 2014. McGuirk is retiring at the end of the school year after more than two decades at the school.

NEW ALBANY — Over the past two decades, counselor Laura McGuirk has guided countless New Albany students on the pathway from high school to the next stages of their lives.

After 22 years as New Albany High School’s senior counselor, McGuirk is retiring at the end of the school year. Throughout her career, she has worked to show students what possibilities lay ahead of them and helped them secure millions of dollars in college scholarships over the years.

She serves as the chairperson for the school’s Honors and Awards Committee, and last month, she was recognized with Indiana University Southeast School of Education’s Excellence in School Counseling award.

McGuirk believes she has the best job at NAHS, and she loves working with high school kids.

“It’s been the best job I could have ever imagined,” she said. “I’ve never worked so hard in my life. Truly, the hours have been unbelievable, but the rewards are incredible. I tear up talking about it.”

Eddie Bobbitt, a 2004 NAHS grad, is taking over her position in the fall, and he knows that he has big shoes to fill. When he was in high school, he didn’t think he would be able to afford college, but McGuirk walked him through the process of applying for scholarships and FASFA.

“As a junior in high school, I only thought about the finances of college,” he said. “Growing up poor like I did, I remember saying I couldn’t go to college because I was poor. Laura let me know there were a few scholarships I could apply for, and the FASFA. I thought, maybe I can go, and I ended up going. Three degrees later and 17 years later, I’m getting the chance to follow in her footsteps.”

McGuirk continued to mentor Bobbitt throughout his college and career as counselor, and she was the second person he called when he learned he would fill her position. He has worked in counseling at the University of Louisville and Prosser Career Education Center.

“I was always indelibly grateful for the experience in high school, and I wanted to make the same impact she made on me,” Bobbitt said.

McGuirk graduated from NAHS herself, and it was always her goal to return there in her career.

She started out working as a career counselor at Indiana University Southeast. As she was conducting career workshops at high schools throughout Southern Indiana, something “clicked” inside her, and she realized that she wanted to work with high school students.

After receiving her certification to work as a high school counselor, she worked at Lanesville Junior/ Senior High School before starting at New Albany High School in 1998.

It is meaningful that a former student will be taking her place at New Albany High School, McGuirk said.

“[Bobbitt] will do a great job,” she said. “It’s very rewarding to see one of my former students step into that role.”

McGuirk plans all year for class night, and she is a liaison between community donors and the faculty. The big event cannot be held in-person this year, but she has been working around the clock to provide students with a virtual class night later this month.

She processes about 900 college applications a year, and she writes many letters of recommendation for students. The letters take hours on end, she said, and she tries to personalize each one.

She has also provided FASFA parent nights to help families with federal student aid applications, and she presented senior parent nights to answer questions at the beginning of the school year. She put together weekly scholarship lists from August to April to share with students and parents, and she compiled information on college, employment and other opportunities in a yearly “senior answer book.”

For about 10 years, McGuirk has taken 90 minutes of the day to sit in the school’s senior loft, or senior area of the cafeteria, to provide guidance to students. She would bring in college reps, employers, military recruiters and former students for casual conversations with students.

“If a student really wants to know what the University of Louisville’s like, for example, I’ll bring in an admissions counselor, but I’ll also bring in a former student who’s currently enrolled there and can tell them, ‘here’s my experience,’” she said. “They might ask a former student a question they wouldn’t ask a professional. I have found that very beneficial, and I would try to bring someone in everyday.”

She has stayed in touch with many former students after they graduated high school, and she loves seeing the positive contributions of NAHS graduates across various walks of life, she said.

It’s been tough for McGuirk being away from the students amid the pandemic, and she feels heartbroken for the graduating seniors.

“It’s not the ending that any of us wanted,” she said. “You just can’t say goodbye in-person, and that’s hard.”

Bobbitt said it’s difficult to describe the impact McGuirk has had within the community, and he views her work as counselor as a barometer for success.

“She treats each individual student like they are the most important student — I know it sounds cliche, it sounds corny, but she does,” he said.

He almost didn’t apply for the Lilly Endowment Community Scholarship, but with her guidance, he applied two days before the deadline. He ended up with the full-ride scholarship, and he studied business marketing and management at Indiana University Bloomington and IUS.

“I don’t think it can be overestimated how much time Laura put into students and seniors at NAHS,” Glover said. “The amount of effort it took to help them earn scholarships and really reach for their goals has been tremendous. You always see educators in high school work hard every day, and she took it to another level. She wanted to see students succeed and earn as much money in scholarships as possible.”

Natalie McGarvey has worked with McGuirk as a NAHS counselor for 19 years. She admires her colleague’s work to recognize as many students as possible through the Honors and Awards Committee and the school’s class night, and she has become a better counselor by working with McGuirk.

“She is so caring and such a hard worker, and she’s so dedicated to all the kids and staff,” McGarvey said. “She pushes kids to reach heights and opportunities they may not have thought possible. Through her years in that position, she has increased number of scholarships and money available to kids.”

New Albany resident Mike Ricke said McGuirk guided his five kids during high school, and they all went on to college and successful careers. She helped take away the “fear of the unknown” and provide their family with peace of mind as his kids were applying for college.

“Whoever you are, when your first child is attempting to go to college, there are lots of hoops to jump through – a lot of forms and a lot of unknowns,” he said. “Laura would be able to communicate with parents and children, this is what we need to do, how we need to do it and when we need to do it.”

Elizabeth Galligan, member of the New Albany-Floyd County school board, said McGuirk goes the “extra mile” for her students, and she helped her son last year as he was applying for scholarships and college programs. She helped convince her son that he was eligible for the Rural Health Scholarship at Indiana State University, which he later got into.

“I think she has inspired students to reach higher than they probably would have on their own,” she said. “Maybe they don’t take the advice of their parents, because they are teenagers, but they will take the advice of a trusted adult and friend.”

It has been rewarding for McGuirk to introduce students to what opportunities are out there, whether they are pursuing a two-year or four-year college, the military or a post-high school career.

“I remember what that was like many years ago not knowing what to do, and I just hope I’m kind of like the guide, the pathway to show them all the options available,” she said.