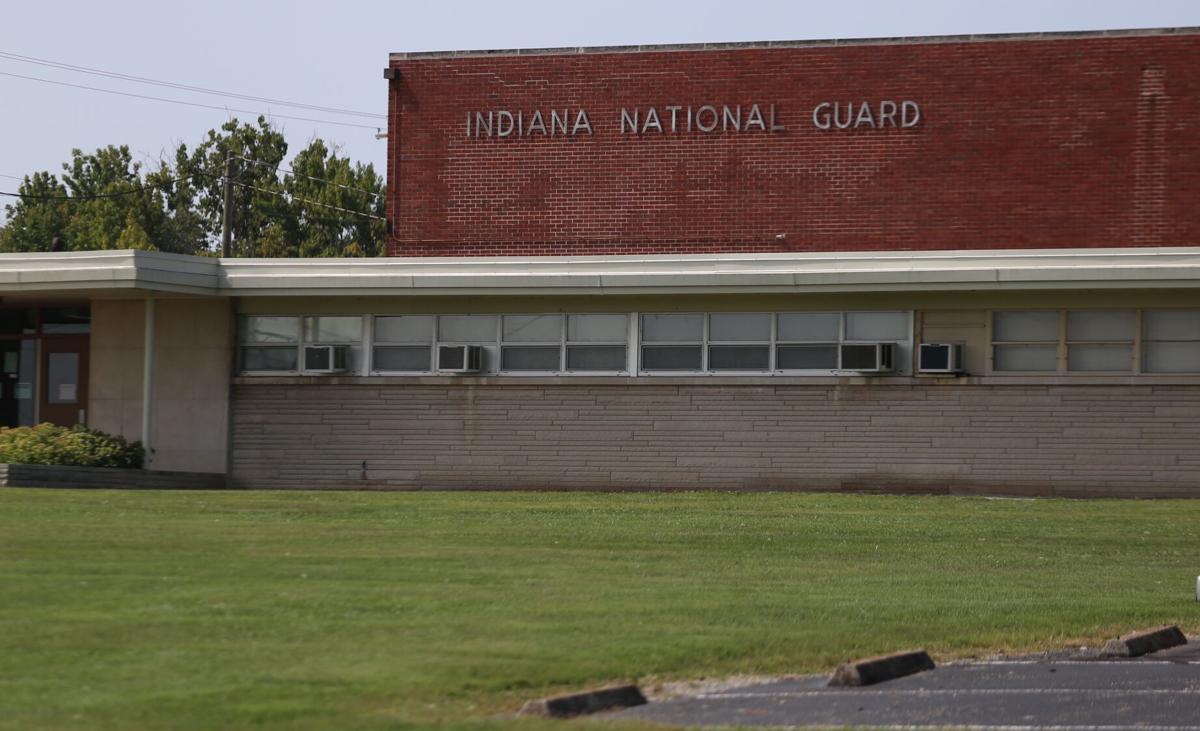 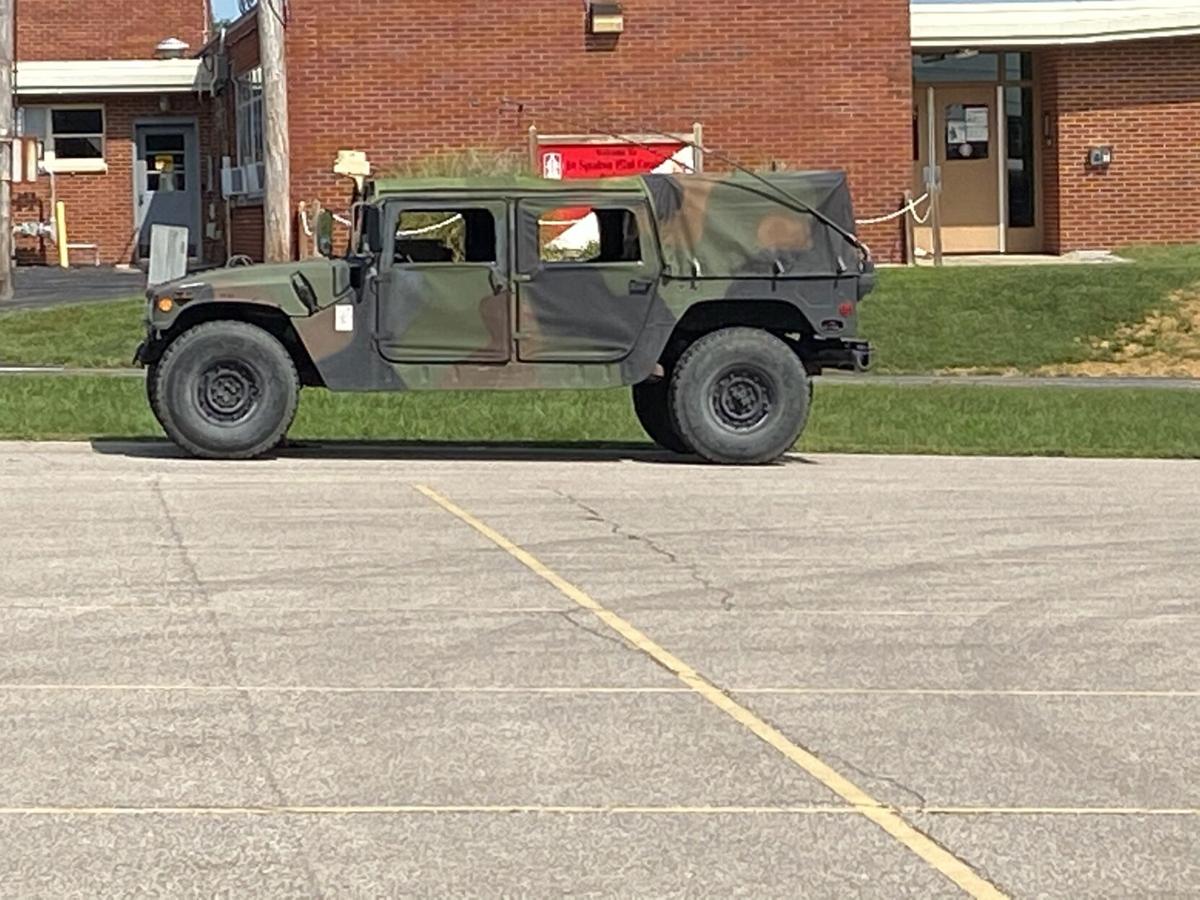 A truck is parked at the Indiana National Guard armory in New Albany on Thursday afternoon as Guard members were training this week.

A truck is parked at the Indiana National Guard armory in New Albany on Thursday afternoon as Guard members were training this week.

The officials who asked for the National Guard presence is unclear, but Lt. Colonel Randi Bougere, of the Indiana National Guard, said the soldiers are “training with and are prepared to support local law enforcement in Southern Indiana.”

“Our primary mission is to conduct military operations in support of civil authorities to enhance local law enforcement agencies’ ability to provide continued public safety and critical infrastructure security,” Bougere stated in an email response to questions from the News and Tribune about the Guard’s elevated presence at the armory along Grant Line Road.

Due to the proximity to Louisville, Southern Indiana law enforcement officials said they are making preparations to respond to civil unrest should it occur after Kentucky Attorney General Daniel Cameron announces whether or not the Louisville Metro Police Department officers who were involved in the shooting death of Breonna Taylor in March will face criminal charges.

As of Thursday evening, Cameron hadn’t confirmed when that decision will be announced.

Those same law enforcement officials said their departments hadn’t been involved in training with the National Guard in regard to any civil unrest responses.

“I have not been contacted by anyone with the National Guard in reference to their activities locally,” said New Albany Police Chief Todd Bailey, who added the police department hadn’t requested assistance from the National Guard.

“We appreciate the men and women who serve in the National Guard, some of whom come from our ranks. At this time however, we do not believe they will be needed in New Albany.”

Floyd County Sheriff Frank Loop also said his office hadn’t requested assistance from the National Guard and they aren’t involved in training at the armory.

Jeffersonville Mayor Mike Moore deferred comments about the situation to the Jeffersonville Police Department. A spokesman for the department said he would check on the request but added it could be Friday before he had an answer due to the timing of the inquiry.

Bougere stated in the email that the Indiana National Guard can be called into active duty as a supporting agency at the request of local, state or federal officials.

“The Indiana National Guard supported local law enforcement and crisis management efforts earlier this year in regions across the state,” Bougere said. “We plan, train, and prepare for emergency response missions with our federal, state, and local partners. We remain ready to respond, as needed, to assist all Hoosiers.”

On May 31, Holcomb directed members of the Indiana National Guard to be on standby to assist local communities, if requested.

There have been some demonstrations and protests in Southern Indiana since George Floyd’s death on Memorial Day sparked civil unrest across the country. Though Jeffersonville and New Albany are only separated from Louisville by the Ohio River, many of the protests weren’t directly related to Taylor’s death, although her name was often mentioned during demonstrations by those who attended.

In Jeffersonville, multiple protests were organized by friends and family members of Malcolm Williams, who was shot and killed by an Indiana State Police trooper in April. Clark County Prosecutor Jeremy Mull declined to press charges in the case as he ruled the trooper fired his weapon in self-defense.

In New Albany, the largest protest was held in the city’s downtown on June 13. The city agreed to close streets to allow for the sizable crowd to march.

Though some heated arguments occurred during a Back the Blue rally at Big Four Station on July 12 in Jeffersonville, no arrests were made.

The protests and demonstrations in Southern Indiana have widely been considered peaceful.

Bailey and Loop said they don’t anticipate New Albany or Floyd County having any major issues regardless of the decision in the Taylor case.

“The NAPD has a strong relationship with our community that involves mutual trust,” Bailey said. “We support people’s right to peacefully protest but will immediately hold accountable anyone who violates the law or breaches the peace.”

Loop said local enforcement agencies in Southern Indiana along with some departments in Kentucky have been in communication and have formed a response plan if it’s necessary to use.

Loop said he understands some people are anxious for a decision about the Taylor case, but he added that a process has to be followed.

“The public needs to understand that in any of these cases across the country, that we need to stand back and let the investigations unfold the way they should,” Loop said. “Those people who are protesting want immediate consequences when if they were in the same situation they would want a thorough investigation.”