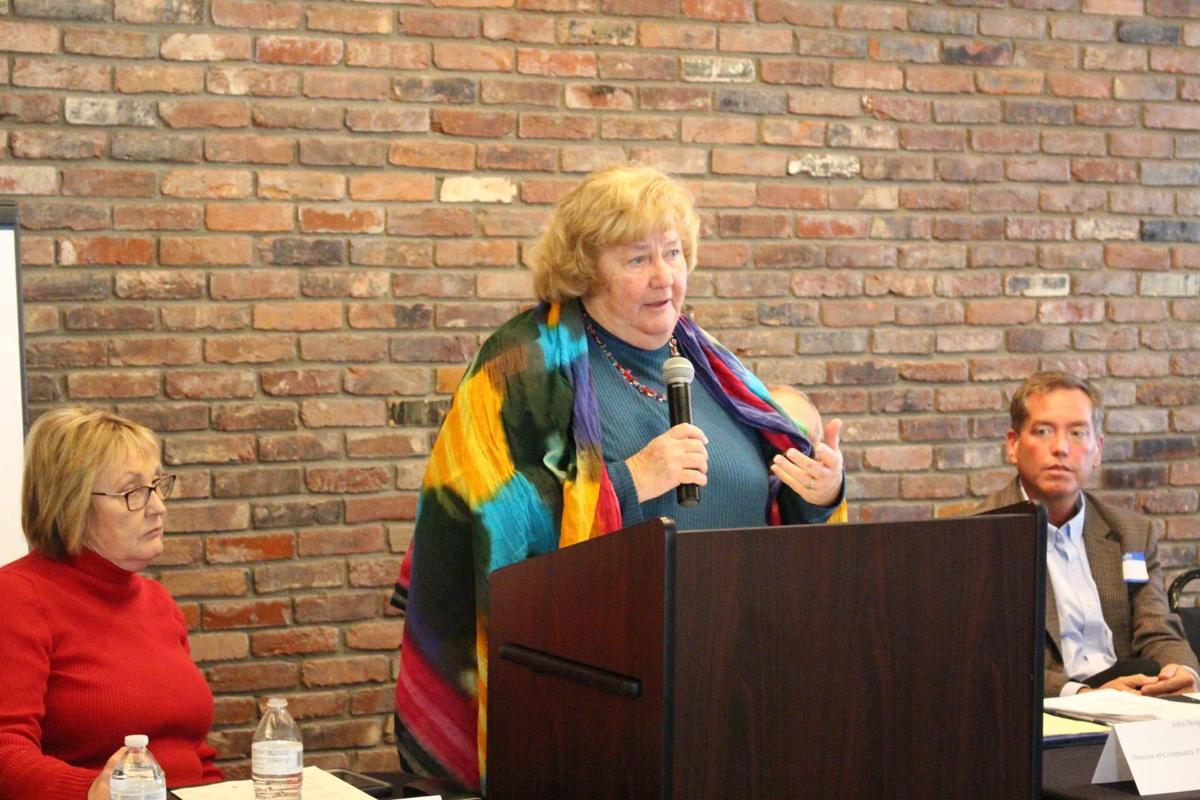 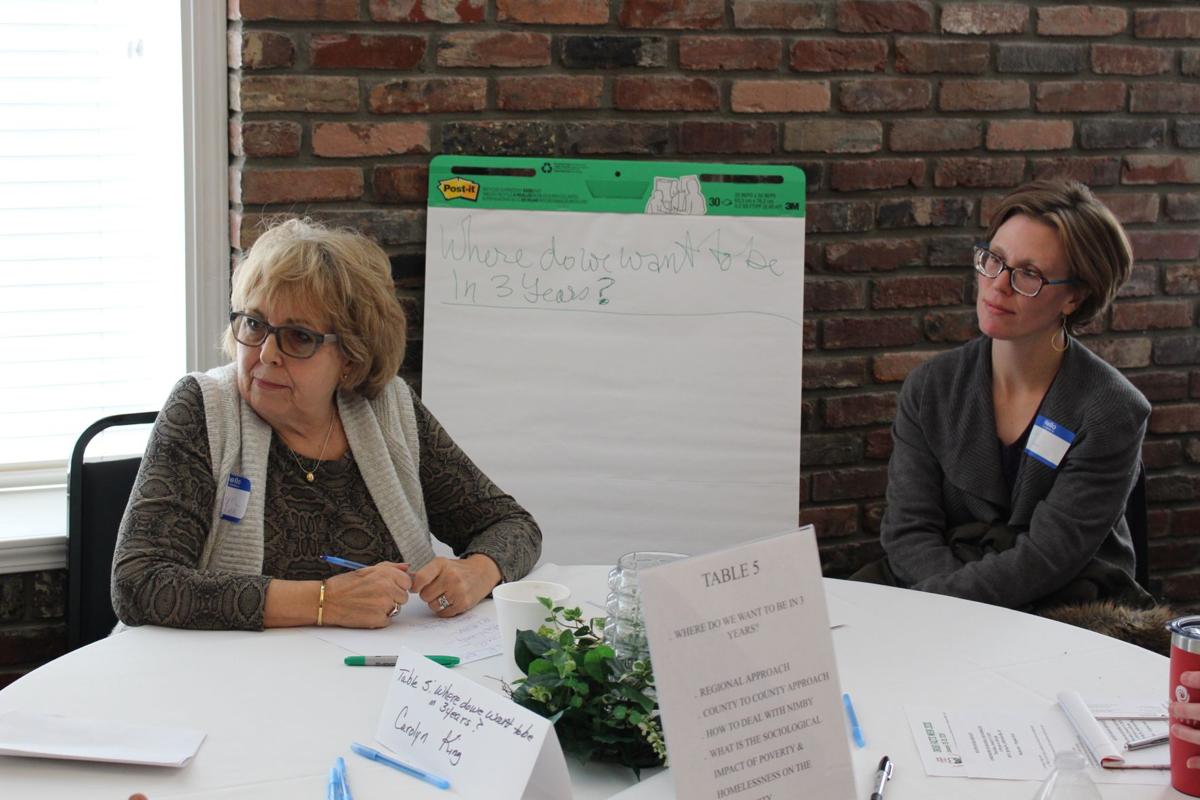 Carolyn King (left) and Sam Rose (right) discuss solutions to finding affordable housing for those in Southern Indiana experiencing homelessness, at a forum Thursday in Jeffersonville. 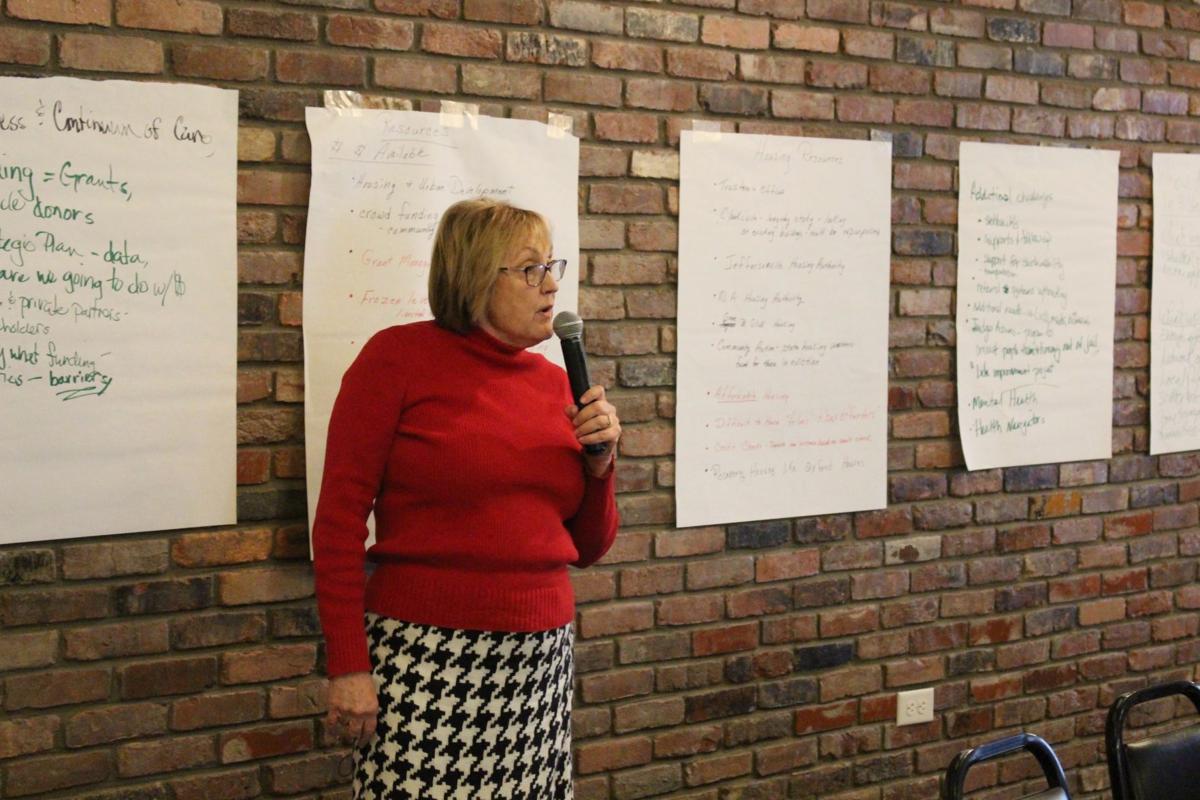 Attendees at a forum Thursday in Jeffersonville to address homelessness and affordable housing brainstormed solutions in groups; each will research their topics and come back for the Feb. 5 meeting with new ideas. Pictured: Moderator Virginia Peck speaks to the audience after the brainstorming sessions. 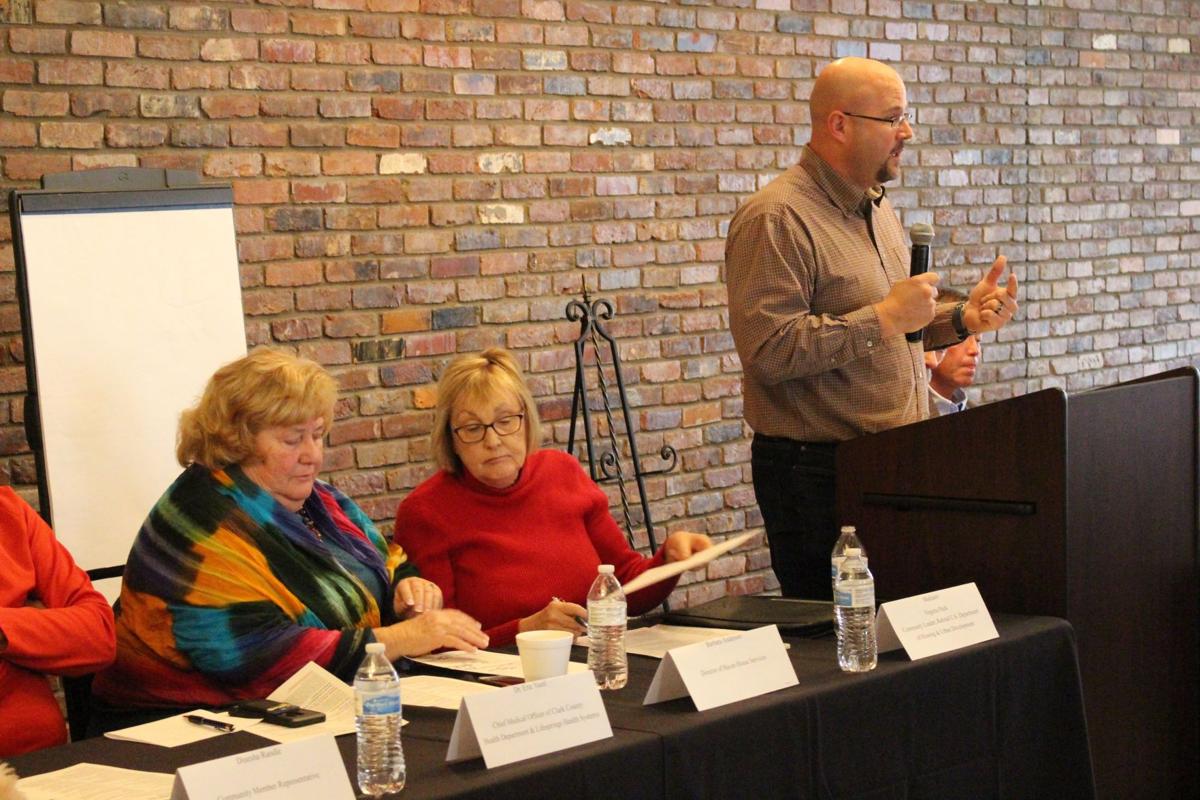 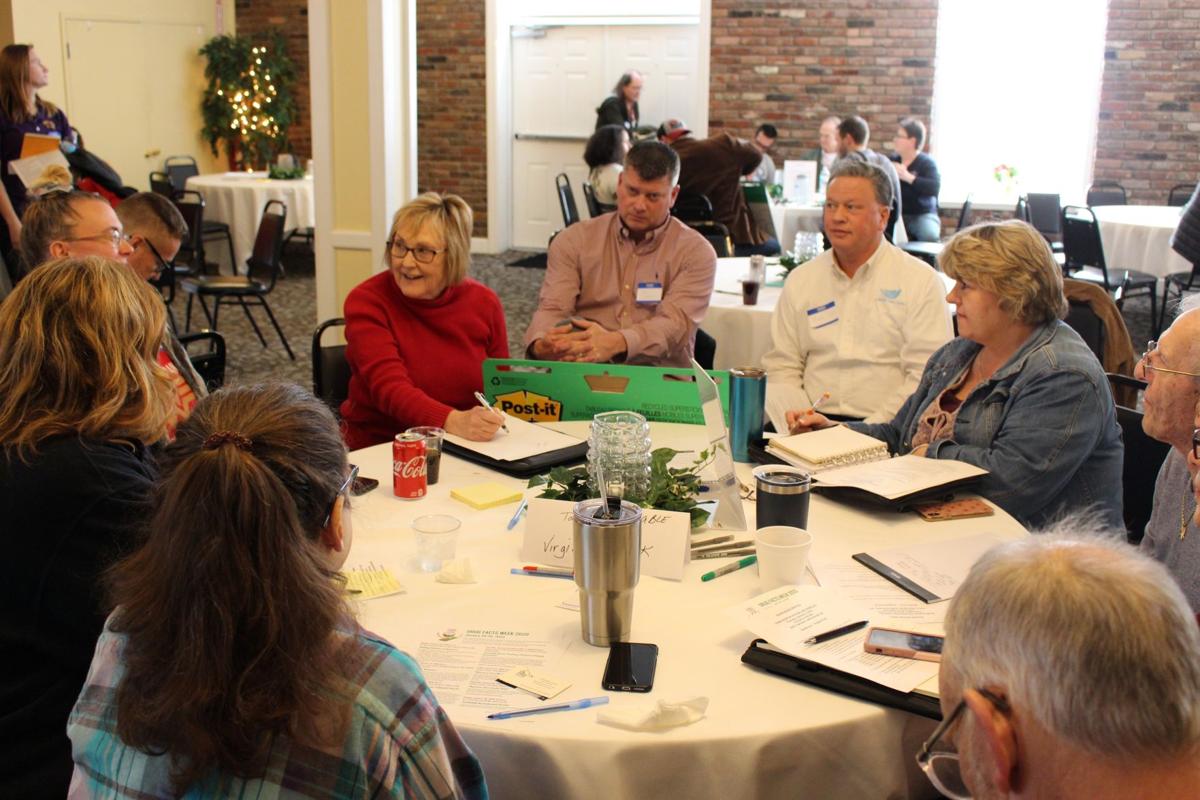 Nearly 100 people turned out Thursday for the first in a series of meetings addressing homelessness and affordable housing in Southern Indiana.

Carolyn King (left) and Sam Rose (right) discuss solutions to finding affordable housing for those in Southern Indiana experiencing homelessness, at a forum Thursday in Jeffersonville.

Attendees at a forum Thursday in Jeffersonville to address homelessness and affordable housing brainstormed solutions in groups; each will research their topics and come back for the Feb. 5 meeting with new ideas. Pictured: Moderator Virginia Peck speaks to the audience after the brainstorming sessions.

Nearly 100 people turned out Thursday for the first in a series of meetings addressing homelessness and affordable housing in Southern Indiana.

JEFFERSONVILLE — A group of Southern Indiana residents is bringing to the table a growing issue some say has long been overlooked in their communities — homelessness and lack of affordable housing.

Nearly 100 people gathered Thursday in Jeffersonville for the first of multiple meetings aimed at finding solutions to the barriers many face in finding or keeping housing, including not enough places to live themselves, or ones out of reach to many. They also looked at funding sources and other opportunities to increase the availability of affordable housing.

The first part of the three-hour meeting included presentations by local and state partners, including representation from the Indiana Department of Housing and Urban Development and the Indiana Housing & Community Development Authority. Attendees included elected officials from Clark, Floyd, Scott and Jefferson counties in Indiana, representatives from community agencies and many who simply came as community members.

"I think what this does is say there's a lot of interest in this subject and people do want to do something," Barb Anderson, director of Haven House Services, Inc., which hosted the meeting, said. "They want to make sure poor people are cared for just as much as wealthy people, as much as middle income people, as much as John Q. Public."

The issue is one Anderson is intimately familiar. In 1983, she started Haven House, and while it recently changed hands and is now called Catalyst Rescue Mission, remains the area's only homeless shelter.

That first night, 45 people stayed there — mothers, children, singles — from the Southern Indiana area. Now more than 35 years later, the numbers have gone up — an average of more than 100 per night — but the opportunities for permanent housing may not have increased.

"We began a long journey that's still going on," Anderson said. But she said the issue is not just that there is only one shelter for multiple counties, but that the housing is just not there.

"We don't just need to shelter them; that's not humane," she said, adding that those in opposition to creating new opportunities for affordable housing in their communities "can't have it both ways. If you do not want homeless people, you have to build housing."

The shelter is now operated by Park Memorial United Methodist Church. Anderson remains on the ground fighting for those who lack permanent housing.

Jim Moon, shelter director and pastor at Park Memorial, gave the crowd a feel for the issue from his vantage point. In 2019, there were 2,371 unique overnight stays at the shelter; that's not including anyone who stopped in for a meal or a shower only. Of these, 74 percent are from Southern Indiana and 16 percent are from Louisville. More than half — 53 percent — self-report as being victims of domestic violence, he said.

Another 40 to 60 are out on the street on any given day in Southern Indiana, with countless others doubling up with families or friends, staying on couches or wherever there is a spot for them.

"They have nowhere to go," Moon said. "For anybody to continue to say this is not in our backyard, you're defying reality."

Dr. Eric Yazel, Clark County Health officer and emergency room physician, said the institutional issue can be seen every night in the ER — a place he said is good at detecting issues in the community.

On a given night, he said, there are 10 of the department's 30 beds in use by people experiencing homelessness — either due to medical issues like injuries from living outside, or just because they don't have a warm place to sleep.

He challenged those in attendance to not only talk about the issue, but do something.

"It's easy to brainstorm," he said. "I challenge you to see it through."

Following the initial presentations, those at the meeting broke into one of five groups, which for 45 minutes tackled a given topic. They addressed barriers to affordable housing such as income, credit history, criminal background, mental illness and addiction; they also talked about the challenges and resources to building the housing that's needed.

Afterward, a representative from each table explained their initial brainstorming findings to the group. Carolyn King, member of Clark County CARES, was in the group that looked at where they want things to be in three years.

Her list included enough affordable housing for people to have homes but also the infrastructure needed — good transportation, and necessities like grocery stores.

Those who worked in the sessions are tasked with researching solutions, and will report back at the next meeting, Feb. 5. Anderson said it's about being a united community, determining what needs to be done in their cities, towns, counties and region.

"If you want to get it done, you just have to have your foot on the pavement and get it done," she said.

The next meeting will be held in early February, place and time to be determined. Check www.newsandtribune.com for updates to the next meeting.