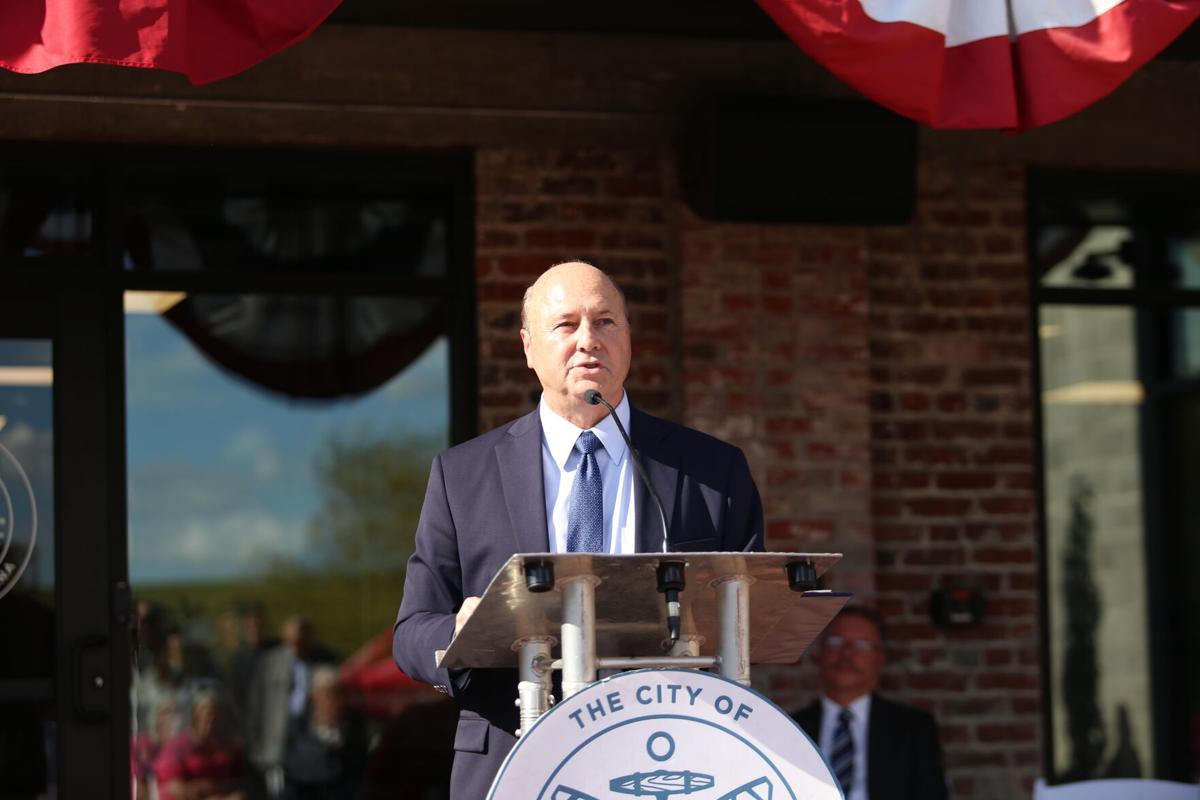 Mayor Jeff Gahan speaks Friday at the grand opening of the New Albany City Hall. It is the new home for the city government, which has previously shared space in the City-County Building. 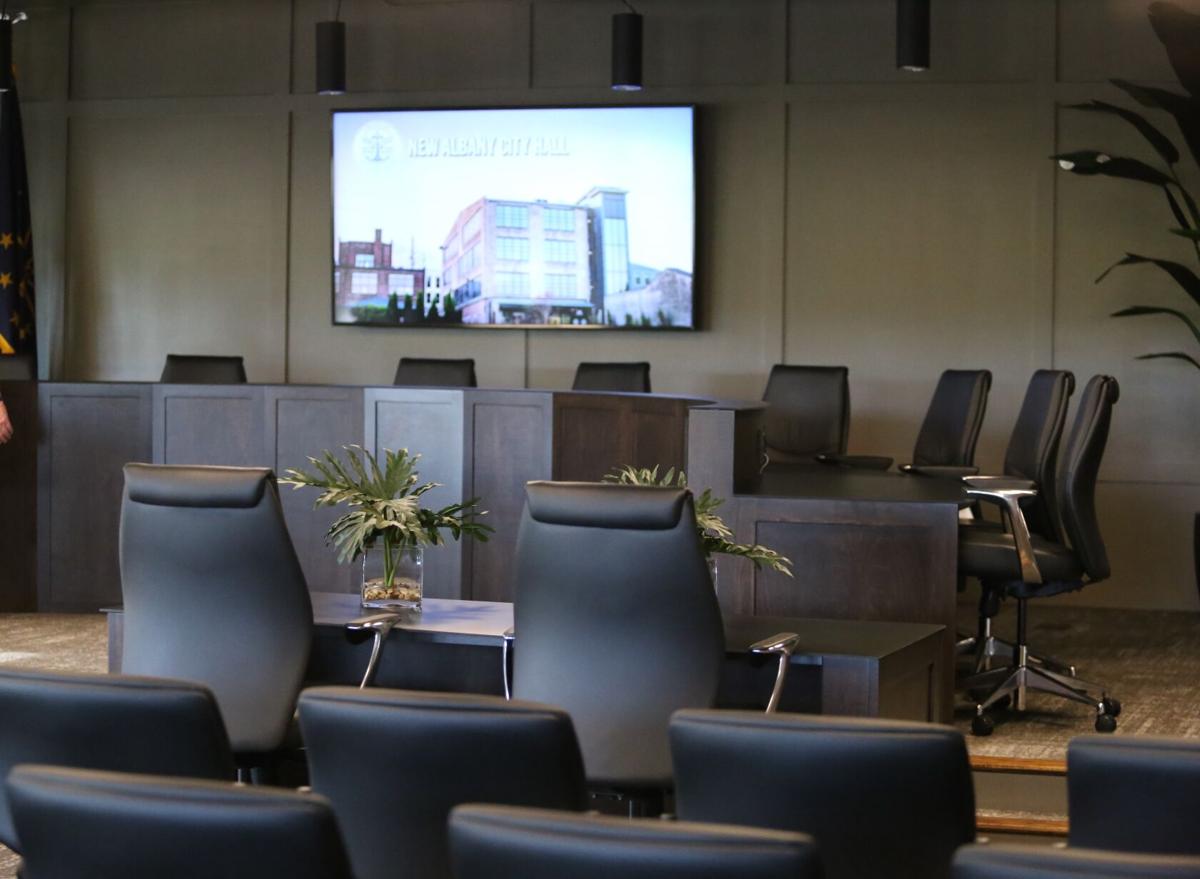 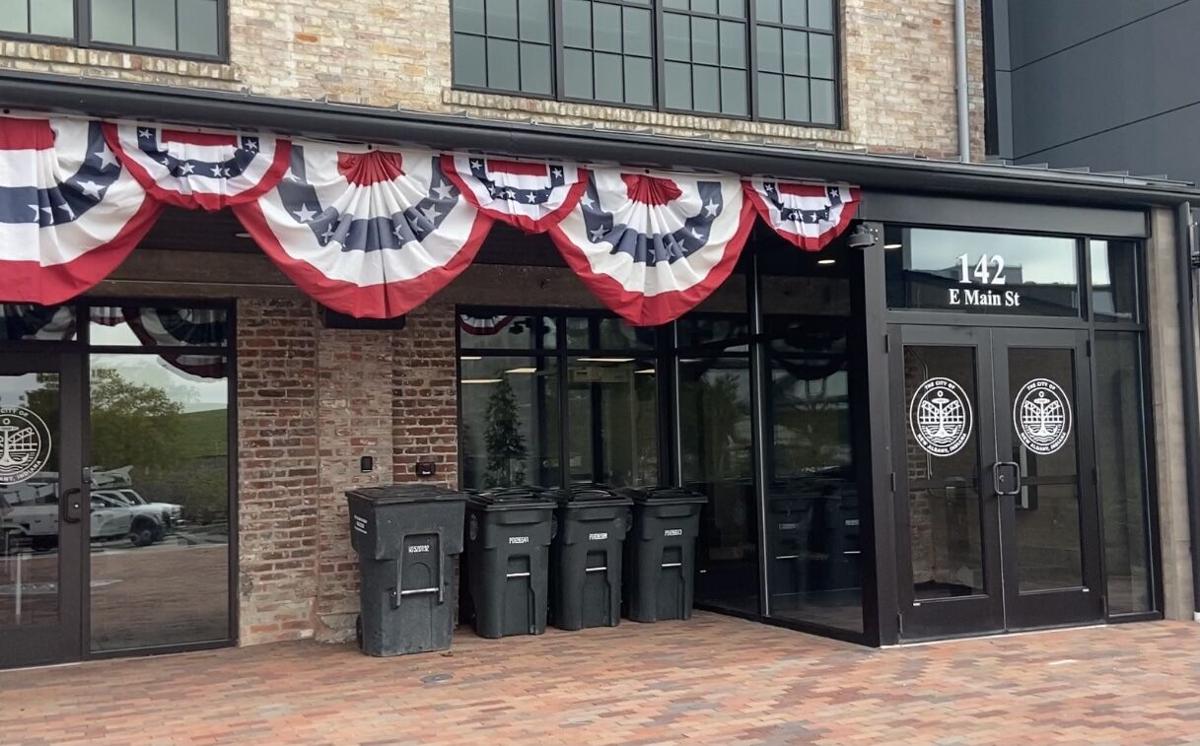 The main entrance to the New Albany City Building on Main Street faces the Ohio River. 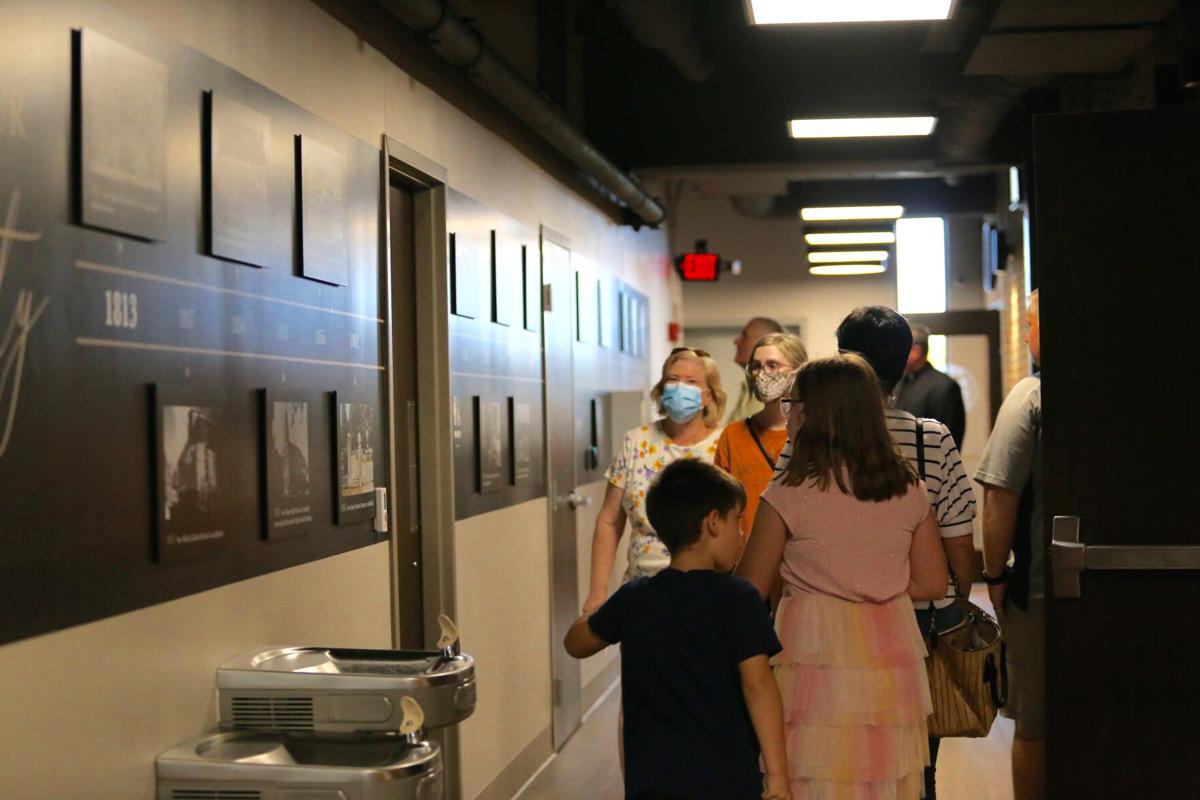 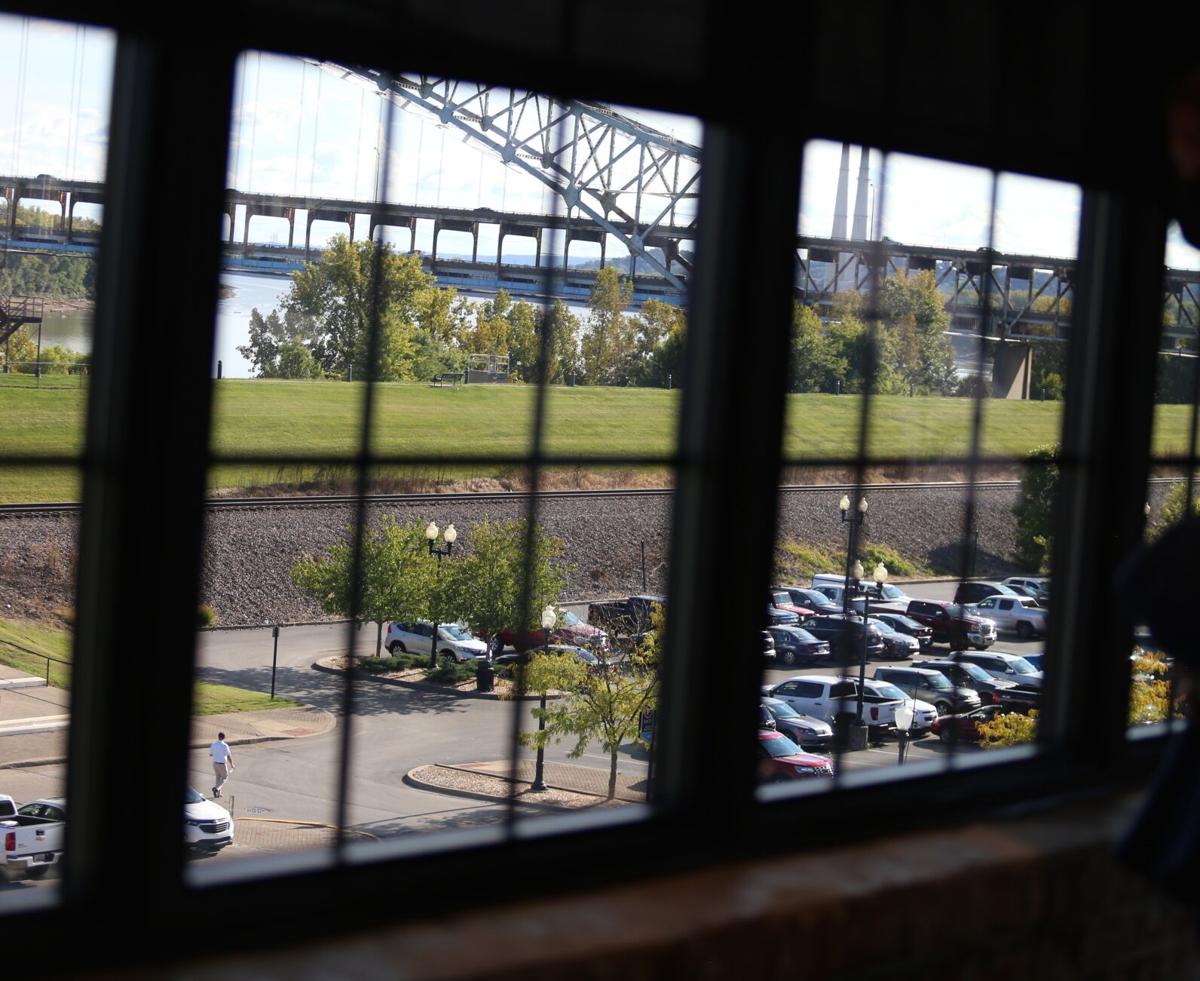 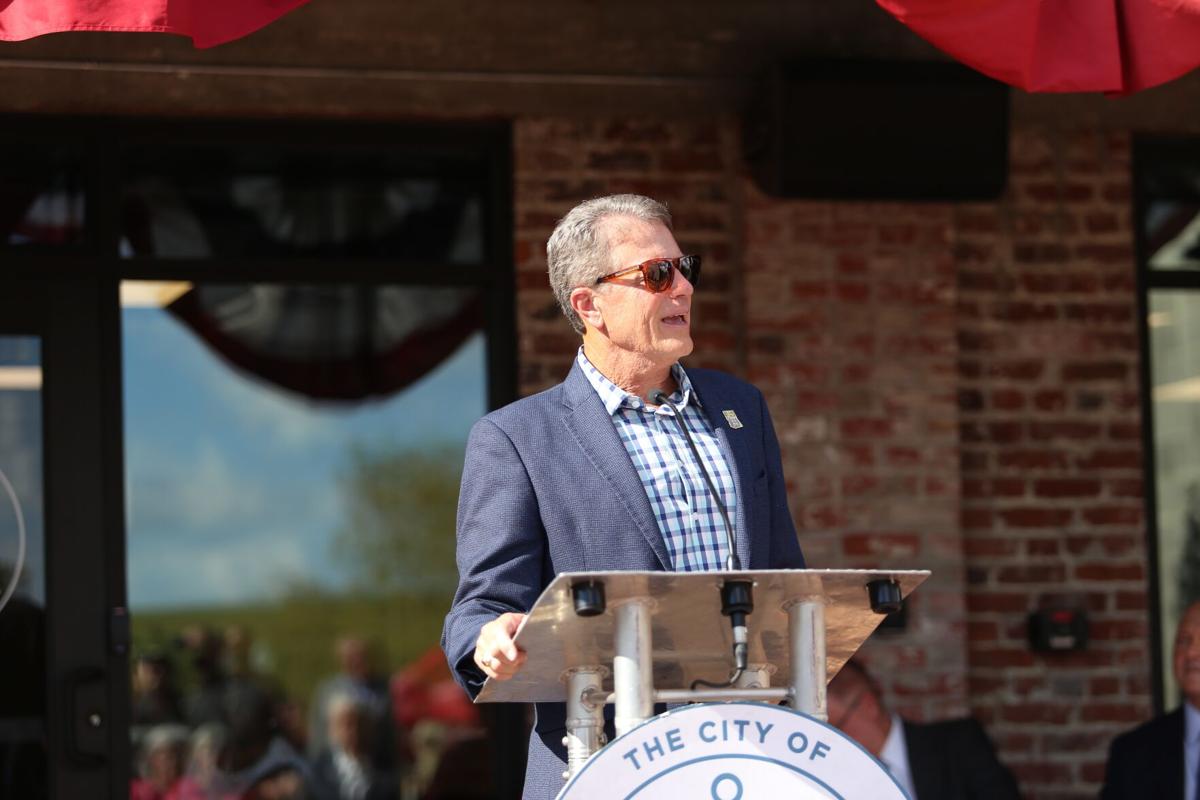 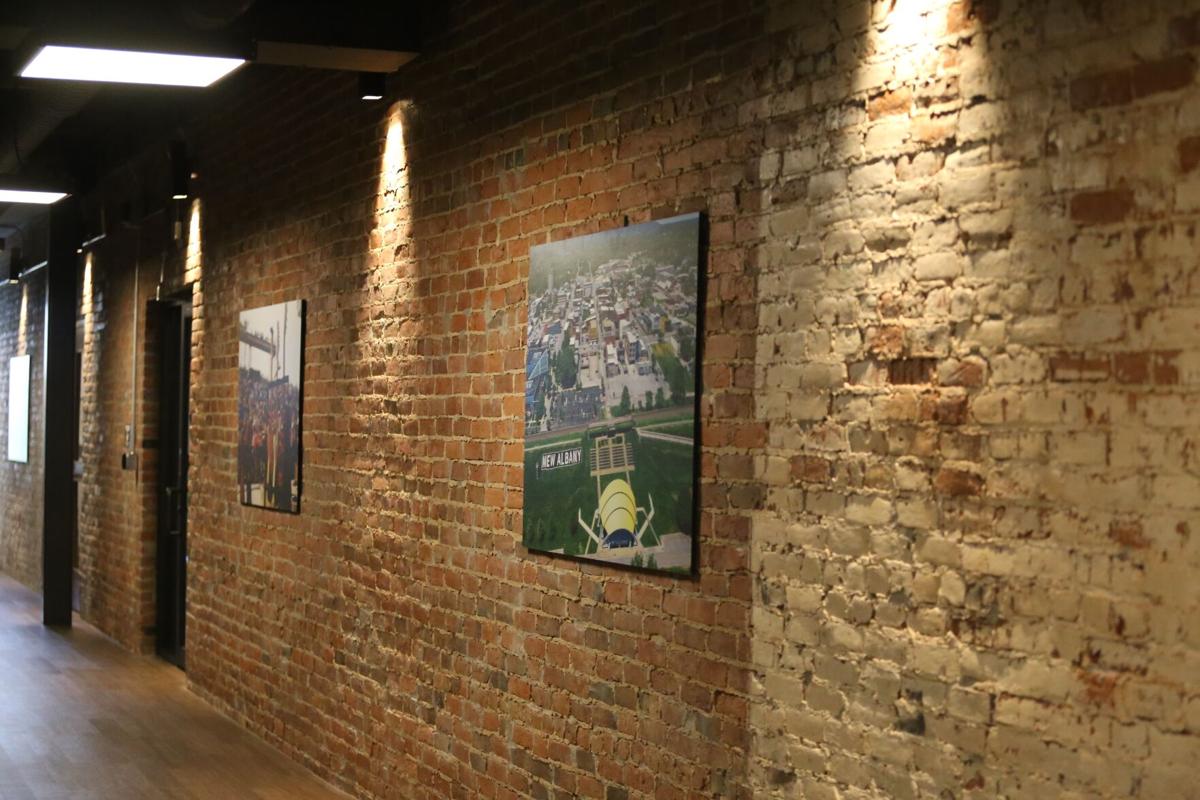 The New Albany City Hall includes exposed brick walls throughout the historic building that dates to the mid-19th Century.

Mayor Jeff Gahan speaks Friday at the grand opening of the New Albany City Hall. It is the new home for the city government, which has previously shared space in the City-County Building.

The main entrance to the New Albany City Building on Main Street faces the Ohio River.

The New Albany City Hall includes exposed brick walls throughout the historic building that dates to the mid-19th Century.

On Friday, the City of New Albany presented a grand opening and open house for New Albany City Hall, located at the former Reisz Furniture building on 142 E. Main St.

“You don’t build a new city hall every day, and you certainly don’t do it alone,” Gahan said at the ceremony. “It takes the help of lots of people working together for a common good.”

For a couple of years, Denton Floyd Real Estate Group has worked to restore and renovate the once-dilapidated space. The 23,000-square-foot structure was built in the mid-19th Century.

Since the 1960s, the city has shared spaces with Floyd County government in the City-County Building. The city occupied the building’s third floor and was paying $200,000 a year for the space.

“For far too long, the city has been a renter in its own downtown,” Gahan said. “I’ll say it again — a renter in its own downtown. For far too long, the people of New Albany deserved a home — a permanent home, home that represents the growing interests and success of our city in the past decade, home that pays homage to our history while also serving as a beacon for the future.”

The New Albany Police Department will remain at its current location on Hauss Square. With the city’s relocation from the City-County Building, the county is now considering options for relocating some of its government offices.

The public entrance to the new city building is on the side facing the Ohio River. The New Albany City Hall houses the mayor’s office and other city departments, and it features new city council chambers and other meeting spaces.

The New Albany City Council voted 5-4 in 2018 to purchase the historic building for an annual cost of $570,000 over 15 years. By the 16th year, the city will officially own the building.

The historic building has served many purposes since it was built in the 1850s, including businesses such as a flour mill, a funeral home, shirt factory and the Reisz Furniture Warehouse Store. It remained vacant for decades until the city chose to rehabilitate the space.

Brandon Denton, co-founder of Denton Floyd, said he views the new city hall as a “great welcoming beacon to New Albany’s riverfront and also to the City of New Albany itself.”

“Today, we’re here to celebrate this beacon, which represents the welcome transformation of an endangered historic landmark,” he said. “What once was a decaying eyesore in downtown New Albany that many were calling to have demolished is now a beautifully-restored community asset that will represent the home of city hall for many, many decades to come.”

Denton said it was “not an easy road” to transform the building. He noted some of the challenges the team encountered during the restoration project, including structural issues such as crumbling walls, foundational issues, sunken floors and rotten support beams.

He said the team was able to resolve those issues, noting “this building is now one of the most structurally sound and safe buildings that we’ve ever constructed.”

“Our team’s goal with this project was not only to preserve as much historic integrity of the building’s original architecture and amenities and features but to also create a modern, efficient, Class A office building that will stand the test of time,” he said.

New Albany City Council President Greg Phipps, one of the city council members who voted for the purchase of the historic building, noted that there were many “naysayers” to the idea of a new city hall several years ago.

“Some said that we should renovate the third floor of the City-County Building,” he said. “Some suggested renting office space in the downtown office building for city government. Others criticized the scope and cost of renovating this building. But I’m proud to say the naysayers didn’t win.”

Phipps noted the bipartisan vision of city leaders who supported the project.

“[It was] a vision to save a historic building, a vision to create a catalyst on the main street corridor for economic development in our downtown, a vision for creating an energy-efficient building, accessible parking, plenty of public meeting space and a welcoming place for city employees and visitors alike,” he said.

Teresa Baxter, a board member of Develop New Albany, said the new city hall demonstrates how a “deteriorating building can be put to productive use in generating activity and community pride.”

“This new location will help the surrounding businesses, bring new energy and enhance the attractiveness of our downtown,” she said.

David Barksdale, Floyd County historian and former city council member, said he was proud to see the redevelopment of the historic structure. He voted in favor of the purchase of the building in 2018.

“Throughout the years, we all have seen our historic downtown transformed from an unattractive area with numerous rundown, vacant buildings with a one-way street grid to a vibrant and thriving city core that we have now,” he said. “In my opinion…we are unsurpassed by any other city in our region and I would possibly even say the state of Indiana with what we have done with historic preservation.”

Barksdale said the new city hall “is a tribute to our citizens —something they can be proud of — and also a reminder of the history that these walls possess.”

Gahan said the completion of the New Albany City Hall acknowledges both the history and the future of the city.

“Some people think by preserving our history we are neglecting our future,” Gahan said. “And that’s not true. We truly can have it both ways — we can preserve the rich history of New Albany we all love, and we can choose to boldly build an exciting future filled with growth and happiness, good health and opportunities for everyone, and we can do it now.”

“We don’t have to delay it, because now we know this brand new historical city hall stands as a testament to this fact,” he said. “When the people of New Albany work together, we can do big things, not just for ourselves, but for our children, our grandchildren and the future of our river city.”