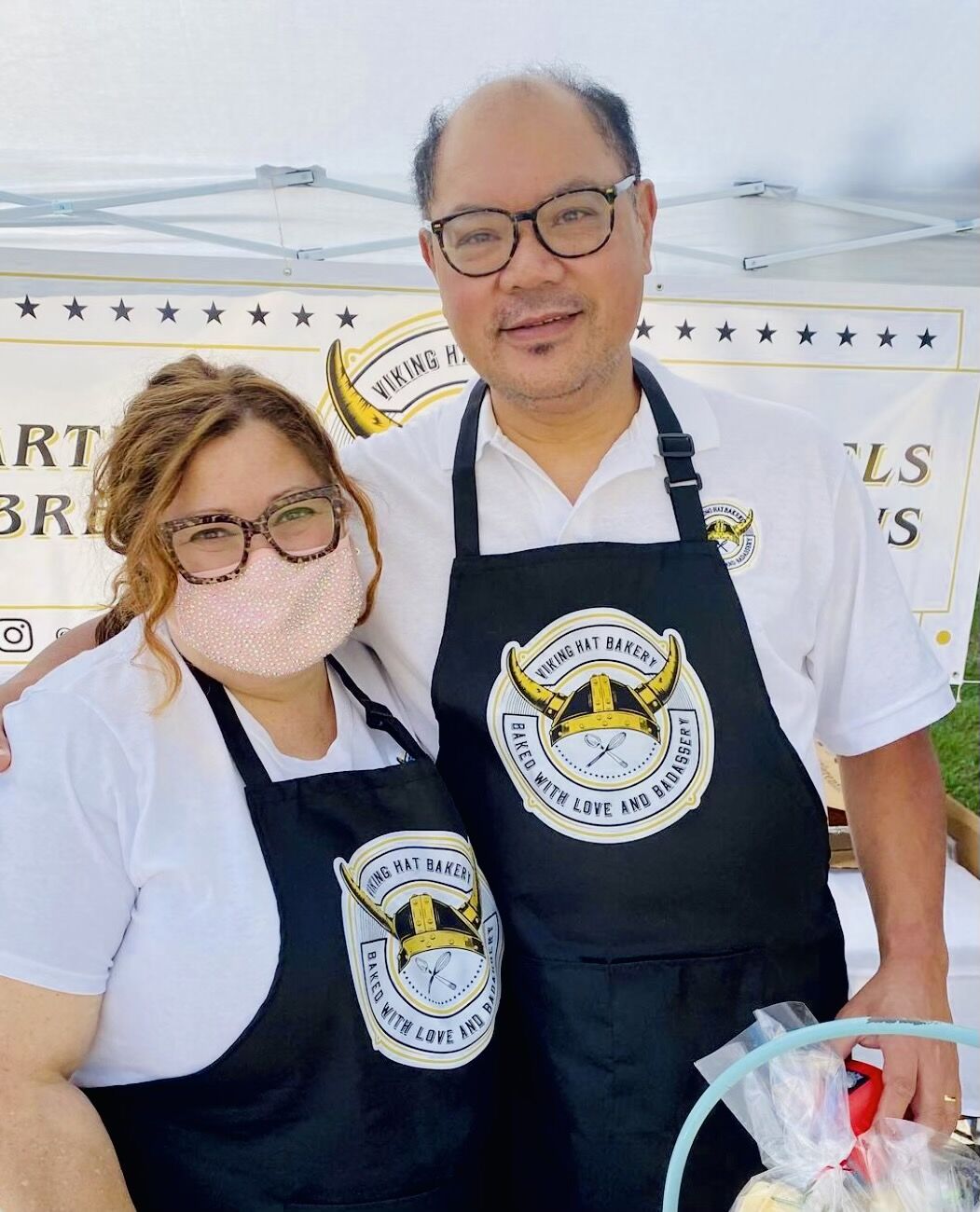 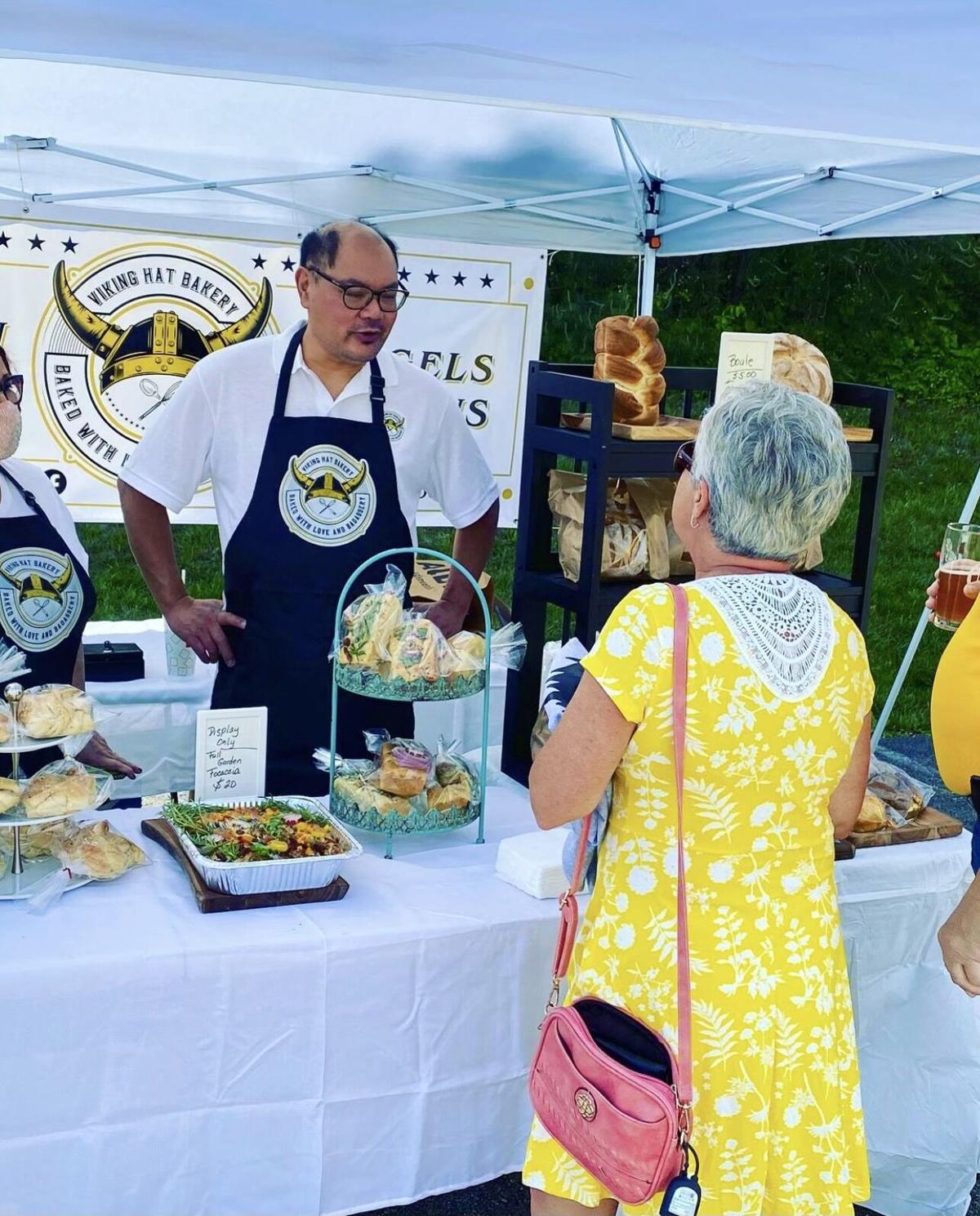 Victor Dela Cuesta, co-owner of Viking Hat Bakery, interacts with a customer at a recent event at Our Lady of Perpetual Hops in New Albany. 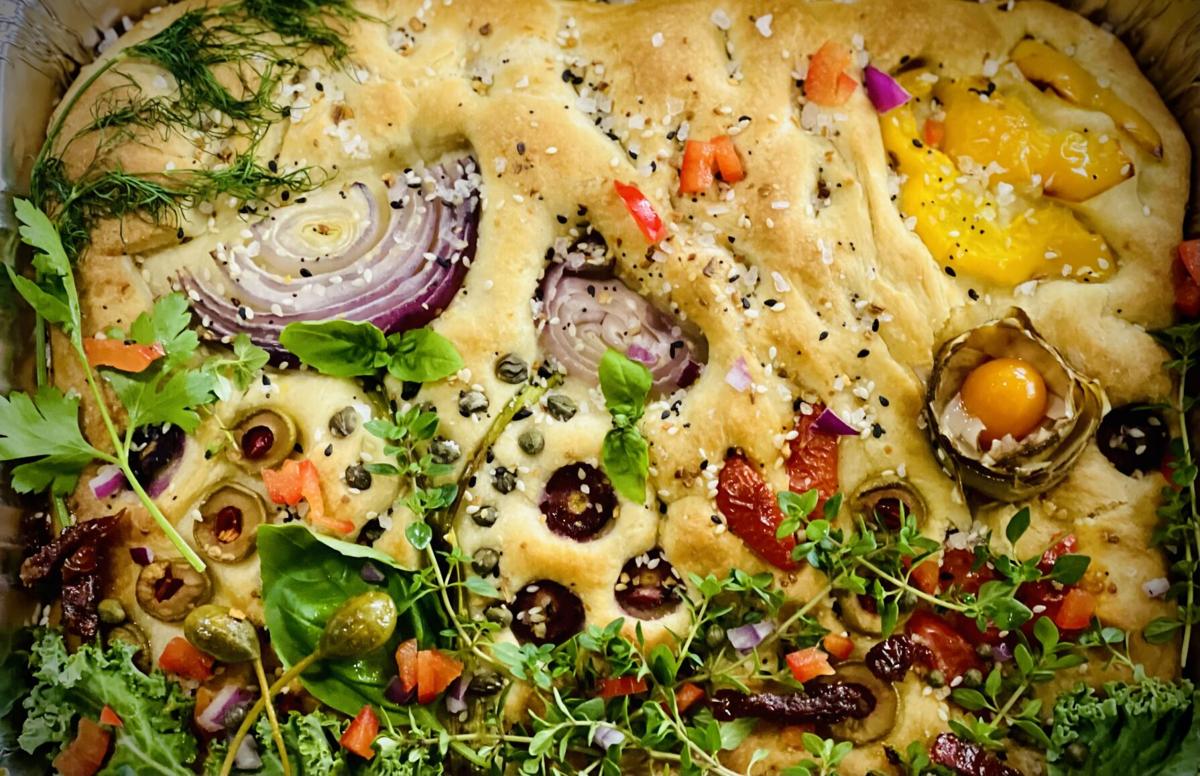 The artistic garden focaccia is among the items offered by Viking Hat Bakery, a business started by a New Albany couple. 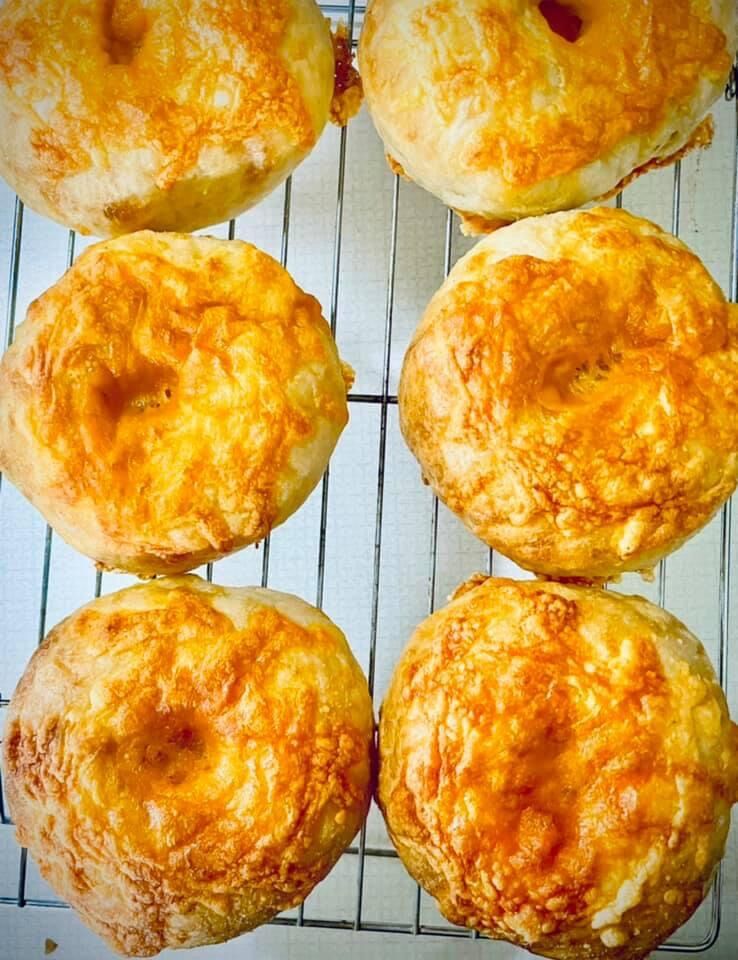 Roasted garlic and cheddar bagels are among the options at Viking Hat Bakery, a bakery business started by a New Albany couple.

Victor Dela Cuesta, co-owner of Viking Hat Bakery, interacts with a customer at a recent event at Our Lady of Perpetual Hops in New Albany.

The artistic garden focaccia is among the items offered by Viking Hat Bakery, a business started by a New Albany couple.

Roasted garlic and cheddar bagels are among the options at Viking Hat Bakery, a bakery business started by a New Albany couple.

Viking Hat Bakery was launched in November by New Albany couple Victor and Hannah Dela Cuesta, and it has continued to expand in a short time.

The bakery doesn’t have a brick-and-mortar location but offers curbside pick-up from the commercial kitchen the couple rents in Louisville and their home in New Albany. Orders can be placed at least a day in advance through the Viking Hat’s Facebook or Instagram pages.

Victor, who has worked as a professional chef for more than 30 years, lost his job as an executive chef at Fourth Street Live in Louisville when the pandemic hit.

“I just started doing this with Hannah to basically keep busy,” he said. “Anyhow, it’s basically blown up.”

The bakery is staying busy with orders, and they have seen a lot of business for Mother’s Day, Derby and now Father’s Day.

Victor is “not one to sit still,” Hannah said.

“He must be producing fabulous food for someone at all times,” she said. “It’s in his blood.”

Hannah is not a baker or chef herself, but she has always wanted to own a bakery, she said.

“No one who knows me had a clue I’ve always wanted to open a bakery,” she said. “It’s always been this silent dream I’ve never had the self-confidence to do.”

Hannah said one of the inspirations for the Viking-themed bakery was learning of her Swedish roots after taking a 23andMe genetic test. Less than 24 hours after receiving the results she came up with the name for the bakery.

“Everything just came together last year, and I dug deep into my newfound Viking spirit,” she said.

Viking Hat’s bagels are among the highlights of the menu with varieties such as turmeric and onion bagels, everything bagels and cinnamon-espresso bagels.

One of Viking Hat’s specialities is its garden focaccia bread, which is topped with an artistic arrangement of fresh herbs and vegetables.

The focaccia art has been a way for Hannah to express her creativity — she started painting when the pandemic hit, but as they launched the bakery, she hasn’t been able to focus as much on art.

“I’ve gotten so busy with the bakery that I don’t have time to paint as well,” she said. “My way of getting my art out is on the focaccia.”

One of the newest desserts Viking Hat has been producing is bourbon-smoked bacon chocolate chip cookies.

“People are just going nuts over it,” Victor said.

Recently, Viking Hat has sold its baked goods at a market at Our Lady of Perpetual Hops in New Albany.

The bakery is also planning a number of collaborations with other local businesses. They are partnering with Beserker Brew Coffee, another local business, for a weekly event Wednesday at the New Albany Farmers Market space, pending approval by the city.

The market will be called “Skol Party,” a reference to a Nordic word for “cheers,” and they hope to start by the end of the month.

Victor said one of the most rewarding parts of the new business is “actually being home for dinner.”

They are not planning to open a brick and mortar, Victor said, but he is aiming for the wholesale and restaurant market.

“We’ll still do the curbside for now, and we’re still looking toward doing more farmers market options,” he said. “Longterm, our goal is to service restaurants and grocery stores.”