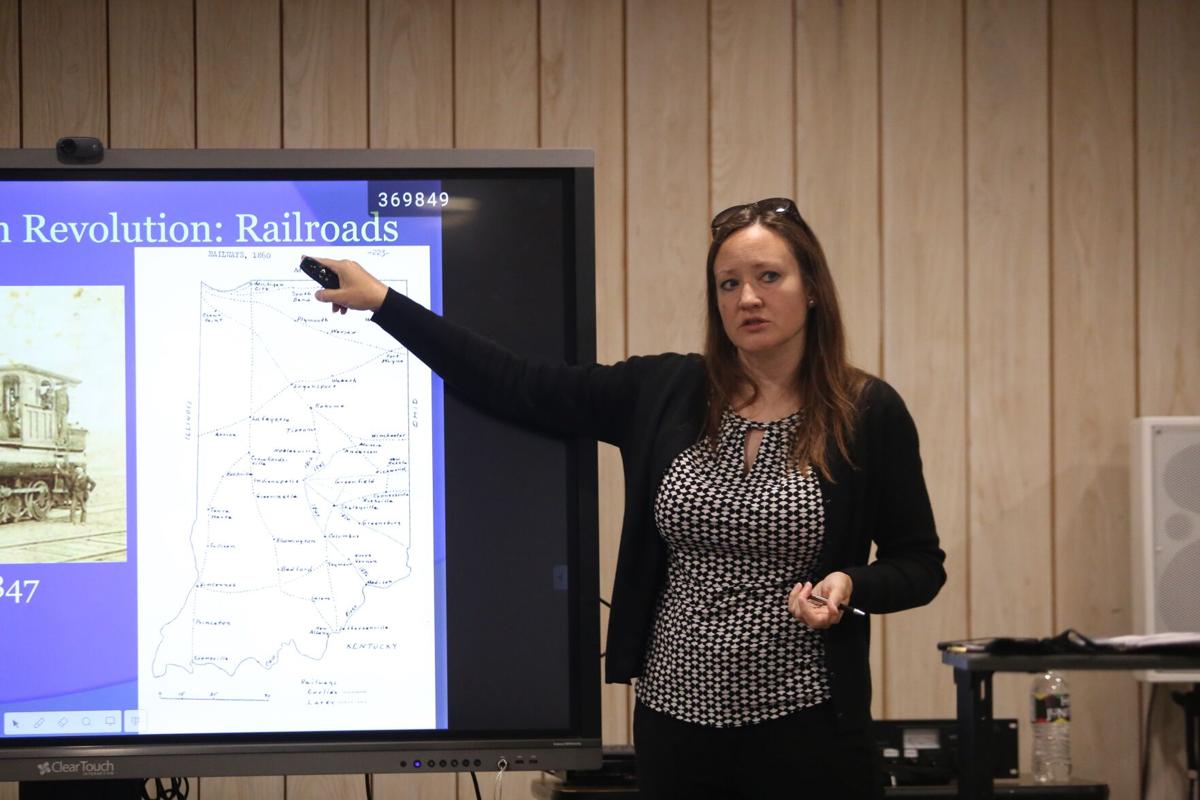 Amanda Rumba speaks Wednesday in the auditorium of the Floyd County Library for a talk about historic Hoosier communities, including Floyd County and New Albany.

A 19th century advertisement for a New Albany glass company was among the historic pictures shared in a Wednesday presentation at the Floyd County Library. The talk focused on historic Hoosier communities. 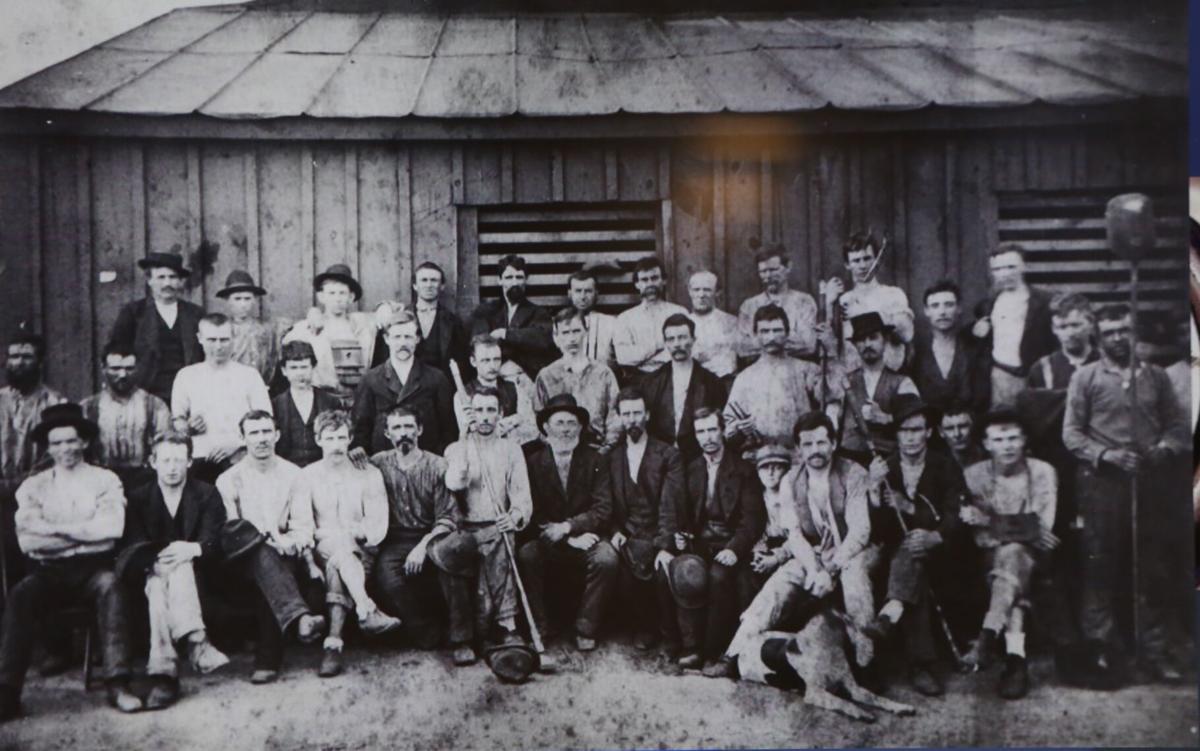 Amanda Rumba speaks Wednesday in the auditorium of the Floyd County Library for a talk about historic Hoosier communities, including Floyd County and New Albany.

A 19th century advertisement for a New Albany glass company was among the historic pictures shared in a Wednesday presentation at the Floyd County Library. The talk focused on historic Hoosier communities.

NEW ALBANY — A recent talk at the Floyd County Library focused on the evolution of communities in the state, particularly on the growth of Floyd County and New Albany.

Scholar Amanda Rumba was the guest speaker for a Wednesday presentation titled “Historic Hoosier Communities: Change and Consistency,” which took place at the New Albany branch.

The talk was part of a series of events the Floyd County Library has presented over the past month as part of Indiana Humanities’ One State/One Story program.

This year’s program is based on a book called “The Year We Left Home,” by Midwestern author Jean Thompson, but the programming has also delved into broader themes of community through library events such as Rumba’s talk.

Rumba is working toward a doctorate in history at Purdue University, and she works at the Purdue Library in archives and special collections. Her specialty is in early American history.

Her talk covered topics ranging from the early settlement of Indiana to the way various industries affected the growth of cities in the state.

“The people who settled this area besides the French who were already here were Irish, German [settlers] who were starting to come into this region, and some free Black communities had moved into the area, but that was still a pretty small population of the community,” Rumba said.

“The French mostly lived in the hills of the Floyds Knobs area, while the German immigrants when the city was founded lived in the more urban setting in New Albany,” she said.

The area saw a huge amount of growth in population in the early decades of the country.

Rumba discussed the role Corydon, which served as Indiana’s first capital, played in the state’s history, as well as the significance of New Albany, founded in 1813 by brothers Joel, Abner, and Nathaniel Scribner.

She noted that New Albany was one of the wealthiest areas in the state for a large portion of the 19th Century.

The talk emphasized the importance of transportation developments such as railroads, roadways and steamboats in the area, and she explored how various industries developed in Southern Indiana.

“Much of the wealth here in Floyd County was initially from ship-building because of obviously the river navigation but also all of the forests around — there was a lot of lumber that was easily accessible, so ship-building was the biggest part of the early economy in this area,” she said.

The ship-building industry in the area “got a really great boost” from steamboats in the 19th Century, she said.

“There were a lot of spin-off industries that came as part of that, so building machines, foundries, furniture makers, silversmith shops from the local mines in the area — you have all of these other spinoff industries that started to stimulate the economy,” Rumba said.

By the mid-1800s, New Albany had railways that connected it with a port at Michigan City, Indiana, on Lake Michigan, along with other rail lines connecting the region to other parts of the country.

“New Albany was really well-connected by these rail lines,” she said. “It connected this whole Midwest region to Lake Michigan through Philadelphia, New York, Baltimore and then west all the way to St. Louis as these rail lines were continuing to be developed,” she said.

In 1881, the longest tunnel in Indiana, the Duncan Tunnel, was built in Floyd County. The nearly mile-long tunnel is in Edwardsville and went through the hills that had previously obstructed rail lines connecting New Albany to St. Louis.

“It took five years and it cost a million dollars, but it really facilitated a lot of trade and shifted the economy throughout the area.” Rumba said.

The original building for Star Glass Works took up about 25 acres between 9th and 13th streets in New Albany, she said.

“Star Glass Works and then American Plate Glass Works was the largest glass manufacturing in the young United States, but it did die out at the turn of the century when the Ball company and other gas companies had access to natural gas, which changed the way glass was made,” she said.

New Albany was also the world’s largest producer of veneer and plywood by 1920.

Rumba said the growth of transportation and various industries in the early history of the state and Southern Indiana contributed to the urbanization of Hoosier communities.

“All these different industries are starting up at this time, and it’s changing the way people live, because they’re connected to each other more quickly, they’re living closer together,” she said. “It’s similar to the way the internet, I think, brings people together, in a sense.”

Laura Wilkins, engagement and outreach coordinator at the Floyd County Library, said Rumba’s talk shed light on how Indiana and Floyd County has changed over the years. She said she feels it fits well into the library’s programming over the past month, which has focused on topics such as rural versus urban communities.