The allegations of "possibly illegal and unethical" actions surfaced in a resignation letter tendered by Mike Bainbridge, the former NAHA director of finance and HUD compliance. The letter obtained by the News and Tribune was dated June 15 and effective immediately.

"When actions are taken by Agency leadership including the Board of Commissioners which blatantly and knowingly conflict with HUD rules and regulations, I'm left with no choice but to resign, as I cannot be associated with such activities," Bainbridge wrote in the letter.

After the board fired former executive director Bob Lane, HUD placed the housing authority on a "zero threshold" status "due to the instability of the management of the agency currently, and in our belief, that federal funds may be in jeopardy," a letter from HUD's Indianapolis Field Office to Board President Irving Joshua states.

A zero-threshold status means personnel matters, expenditures over $1, payroll and "all functions of the agency" must first receive HUD approval. 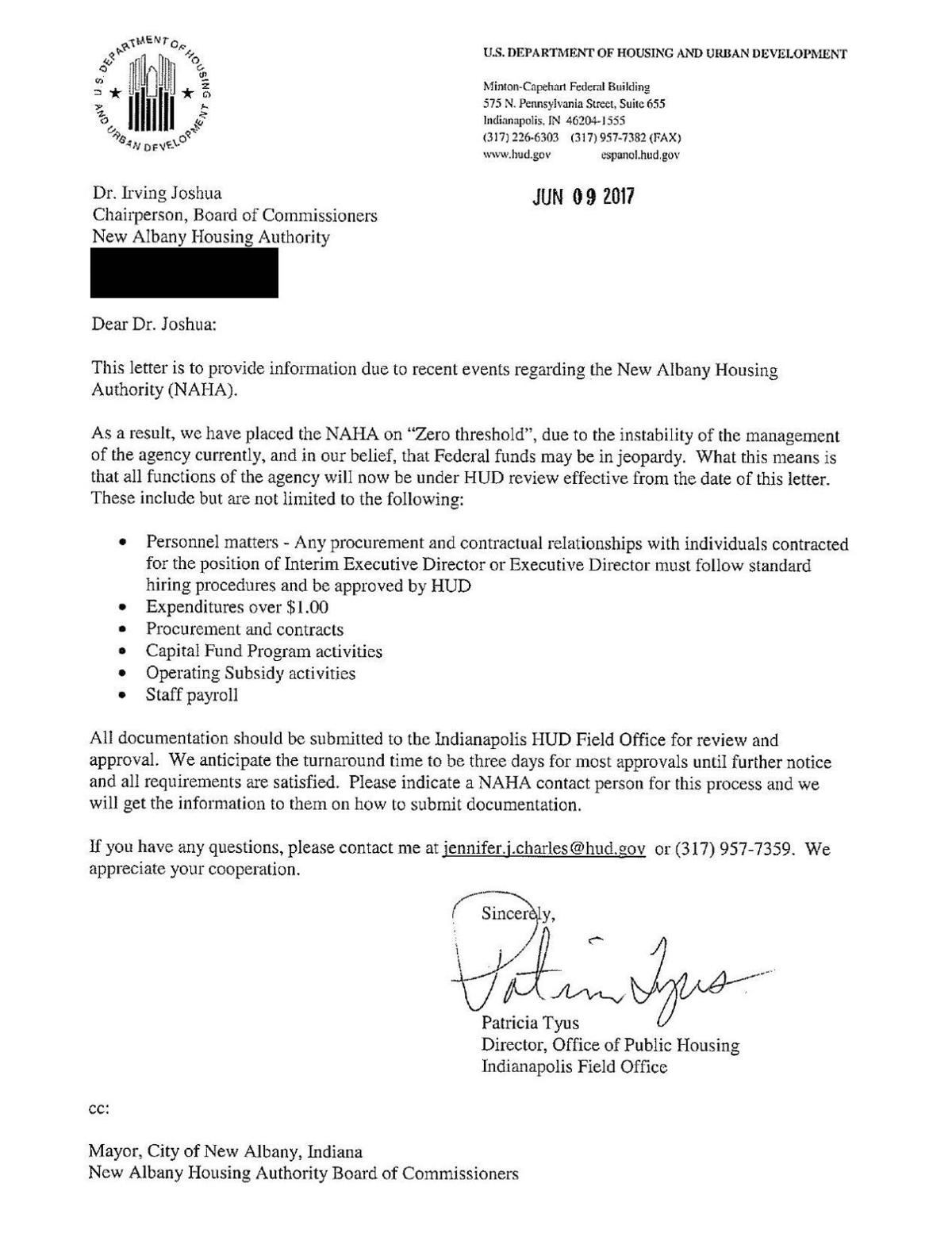 "Given the sudden departure of the housing authority’s executive director and subsequent leadership vacuum, we wanted to make certain appropriate internal controls remain in place regarding the use of federal taxpayer dollars," HUD spokesman Brian Sullivan wrote in the letter. "The New Albany Housing Authority is a high performing housing agency and we look forward to the installation of a new director who can resume financial control of the agency’s federally funded programs."

The date on the letter is June 9 — three days before former New Albany Redevelopment Director David Duggins was appointed by a board vote as interim director.

Documents included as attachments to Bainbridge's resignation letter indicate the zero-threshold letter was mailed to Joshua.

An email correspondence shows Bainbridge forwarded an electronic copy to Joshua the morning of June 12, hours before Duggins was appointed. The board chair replied, "Mike I am looking into this. Don't do anything until after meeting today."

In mid-May, Bainbridge was in contact with HUD Indianapolis Field Office officials to determine the processes through which the Housing Authority needed to enter before appointing an interim director.

Bainbridge was told to follow the housing authority's standard practice and procedures, which includes advertising the position and interviewing applicants, an email correspondence states. An Indianapolis HUD official wrote, "if the interim is brought in from the outside as an employee, the board needs to follow an employment search process."

But no such process occurred. 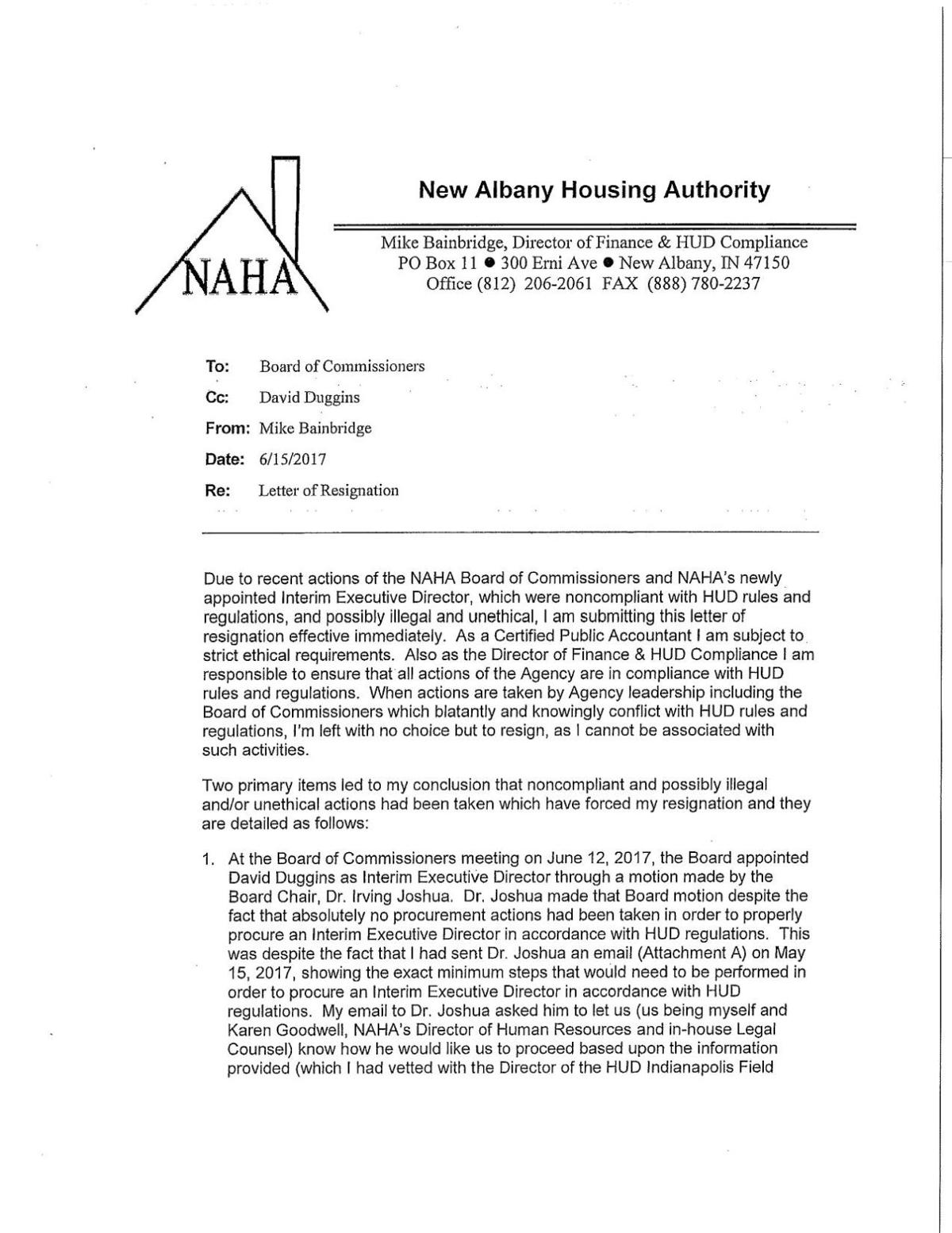 Bainbridge asked Joshua via email twice — once May 15 and again June 1 — how or whether to proceed with a search process, but the former CFO claims Joshua did not respond to either email. The resignation letter attachments include a read receipt from May 15, showing Joshua viewed the first email.

In a phone interview Thursday, Sullivan confirmed the board did not follow the required search process, nor did it receive approval from HUD before appointing Duggins as interim director as required from the zero-threshold status.

"We had some concerns there," said Sullivan, who is based in Washington, D.C. "We're working through that... Really our interest, our only interest, is to protect the taxpayers' interest in all of this, which explains the zero-threshold status which the agency found themselves in. Following being placed on that status, they made a decision with respect to an interim director who came from the outside not in keeping with their established [hiring] practices.

"It was a bit cattywampus, and we brought that to their attention, and we're working through the issues that are involved in that."

Duggins told the News and Tribune that he asked the Indianapolis Field Office what he needed to do in order to be compliant. A representative told him over the phone that the board needed to send a letter stating he was appointed and that contact information needed to be updated, Duggins said.

Not once has that office not recognized him as interim director, he said.

"Given the fact that the mayor and Irving Joshua have been to Chicago to meet with the regional directors of HUD means that it's not been an issue," he said.

HUD sent the New Albany Housing Authority a letter, asking that they hire an interim executive director after Lane was fired, Duggins said. 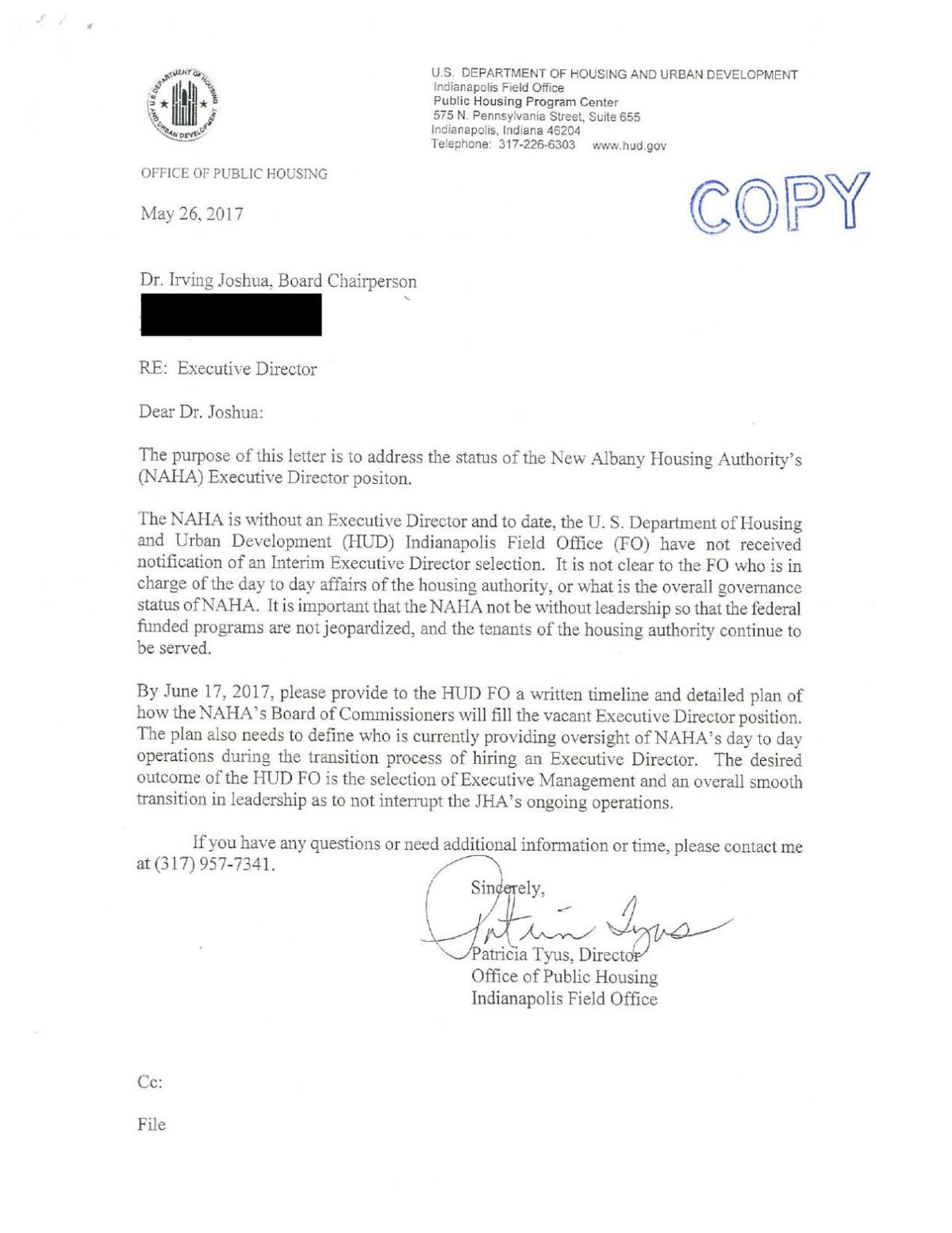 "They bypassed the normal [hiring] procedures, which are just the normal procedure, not anything by HUD that is set in stone [as the law]," Duggins said.

Another event that caused Bainbridge to resign was Duggins' instruction to him to allow the interim director to process payroll, apparently without prior HUD approval as required by the zero-threshold status.

According to the resignation letter, Duggins told Bainbridge in a voicemail June 13 that "if there were any issues with HUD, he would handle them personally."

Duggins confirmed he did not seek prior approval from HUD, "but they did not have a problem with it at all."

Paychecks were due to employees June 16. Because HUD stated it needed three days to review and approve requests, Duggins said he didn't want to risk employees wouldn't be paid on time.

"I have three goals here. The first is the residents and the quality of place we have for them, the second is the employees and the third is the buildings," Duggins said. "And I did not feel in any manner that HUD was going to have an issue with me processing payroll.

"If there would have been an issue with that, I wanted Mike to be comfortable that that was not his issue, it would be mine with the support of the board."

Duggins said he has since asked for HUD approval on all required actions.

When asked for comment on this story, Bainbridge declined to offer anything further than a statement given to the News and Tribune.

"In matters that are this serious and significant, I do not want to make statements that are based in even the slightest degree of speculation or opinion," the statement read. "I prefer to deal in, and present, only known facts. The facts that led me to resign from my position with NAHA are stated in my letter of resignation, and proven by the attachments to that letter. I will let those facts stand on their own merits."

The News and Tribune first reported on Bainbridge's resignation in late June. He declined to comment for that story, as well, but in a public post on his personal Facebook page at that time, he stated, "... after 3+ years of running Bainbridge Tax and Accounting as a side business I finally worked up the courage to leave my Director of Finance position at New Albany Housing Authority to go all-in with it."

NAHA board member Kent McDaniel, the only one who didn't vote in favor of appointing Duggins, said he doesn't think "anything was followed properly."

He said he had no knowledge of a prior search process for an interim director.

"The head of the board presented it as a motion, and that was it," McDaniel said.

No other board members responded to interview requests by press time.

Take a look back at our stories covering the New Albany Housing Authority's plans to reduce its public housing stock, and how the makeup of th…

NEW ALBANY — The living room of an empty public housing unit on Vance Court has holes in the wall, cracks along the baseboard and a sagging ceiling.