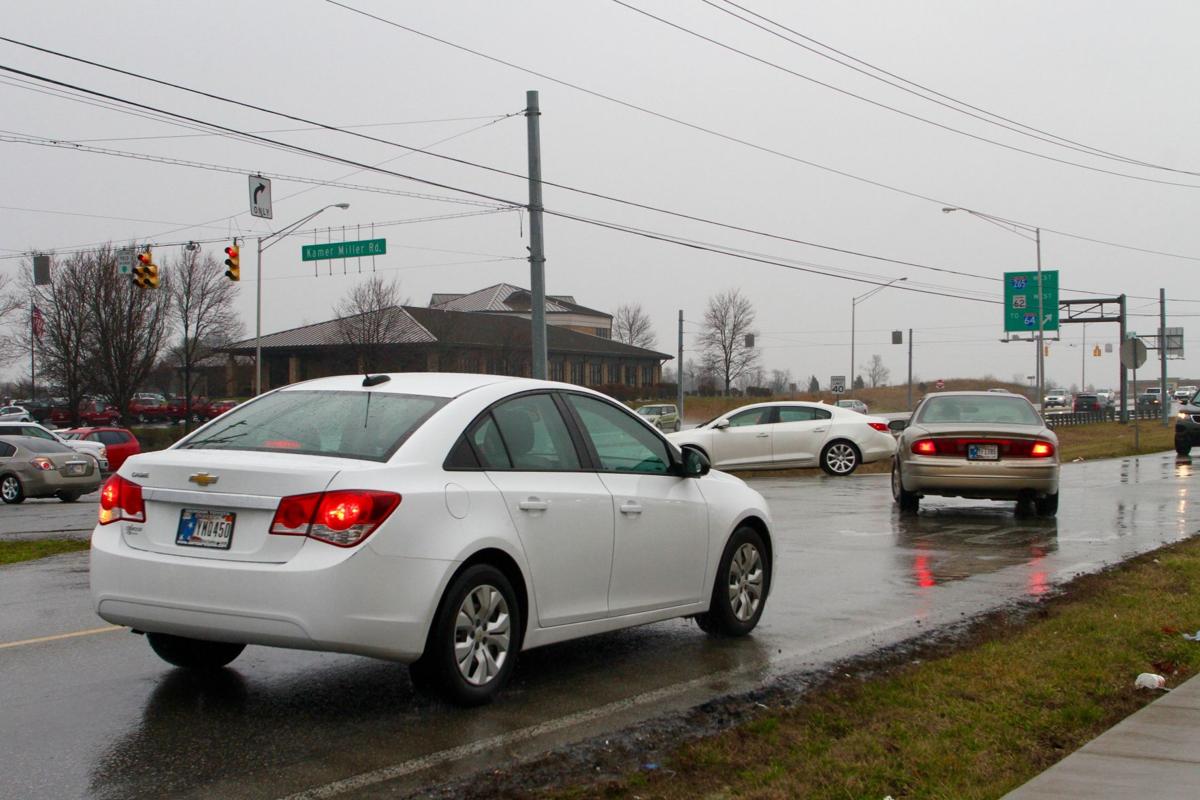 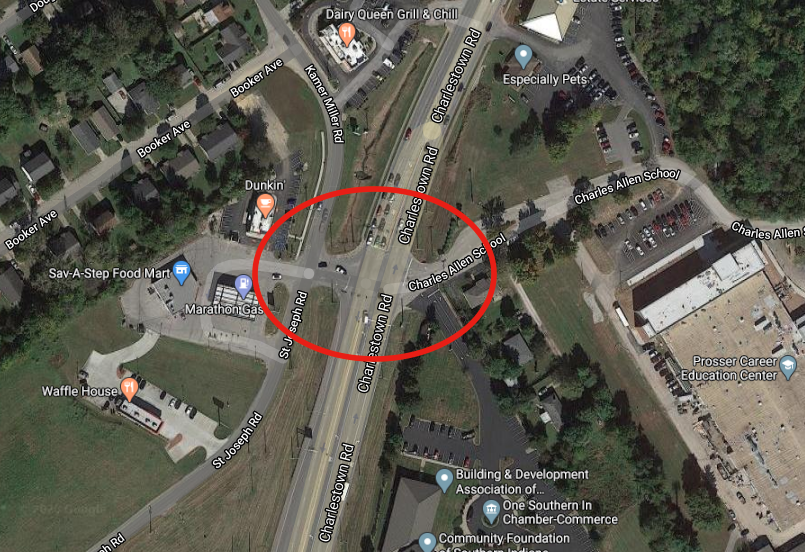 New Albany is moving forward with plans to rework the intersection of St. Joseph, Kamer Miller and Charlestown roads to improve traffic flow along the corridor.

New Albany is moving forward with plans to rework the intersection of St. Joseph, Kamer Miller and Charlestown roads to improve traffic flow along the corridor.

NEW ALBANY — Any driver who frequents the stretch of Charlestown Road just north of Interstate 265 is likely no stranger to the difficulties of one of its most congested intersections.

The first stoplight drivers hit upon entering the busy corridor has Prosser Career Education Center on one side, with the other side occupied by a Marathon gas station marking the meeting point of St. Joseph and Kamer Miller roads. Currently, the two roads and gas station each have stop signs at their convergence.

A short strip of roadway then connects the three-way stop with the stoplight on Charlestown Road. To alleviate the problems caused by the rather complicated intersection, New Albany officials are now looking to reroute the roads to make traffic flow more smoothly in the area.

“Just about everybody that lives in the city knows that it’s a tough intersection, and that’s putting it lightly,” Redevelopment Director Josh Staten said. “We’ve known we needed to fix it, and now we’re ready to take some action to get it done.”

On Tuesday, the New Albany Redevelopment Commission approved a contract with HMB Engineers to move forward with the design phase of the project. Next week, the team will begin the process of finding out how to best modify the intersection.

Prior to the construction of Interstate 265, city engineer Larry Summers said that St. Joseph Road extended through the area where Kohl’s now sits. When the road was split to make way for the highway, it was then reworked to its current route, with a stretch running parallel to I-265 before connecting Kamer Miller Road.

In addition to improving traffic flow and overall safety, Staten said the project will also help stimulate development. Several major businesses sit in the vicinity of the intersection, along with Prosser and Northside Christian Church.

Cattleman’s Roadhouse will join them once construction of its St. Joseph Road location wraps up this year. But to ensure that more of the vacant commercial land is developed nearby, Staten said improving the intersection is critical.

“We’ve had a lot of builders and businesses looking at moving in somewhere on that portion of Charlestown Road, and we’re at a point where a lot of the land there has either been built on already or it’s tough to get to,” Staten said. “A lot of that stuff between Cattleman’s and Waffle House, right now it’s tough for that to be developed, because that intersection makes it so tough for potential customers to come in.”

The Indiana Department of Transportation operates the signal, meaning the city will have to work with the state to find a solution. Once the project progresses, officials will have a better understanding of their options for rerouting the roads.

Right now, construction is expected to begin sometime next year.

“The big thing is to smooth it out,” Staten said. “The idea is to just help traffic operate in a better way. The density isn’t going anywhere. In fact, it’s going to get more dense as we continue to grow. It’s right by the highway, so there’s a high demand for commercial and office spaces.”