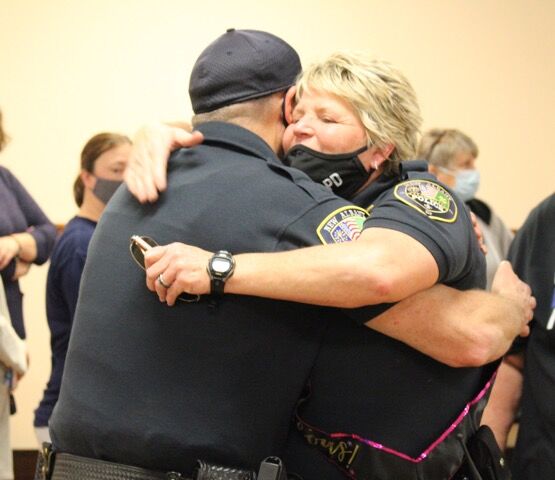 New Albany Police Sgt. Julie Condra hugs Capt. Mike Lawrence, her best friend of three decades, at a retirement celebration for Condra Thursday in New Albany. Condra will be leaving the department in April after nearly 35 years of service. 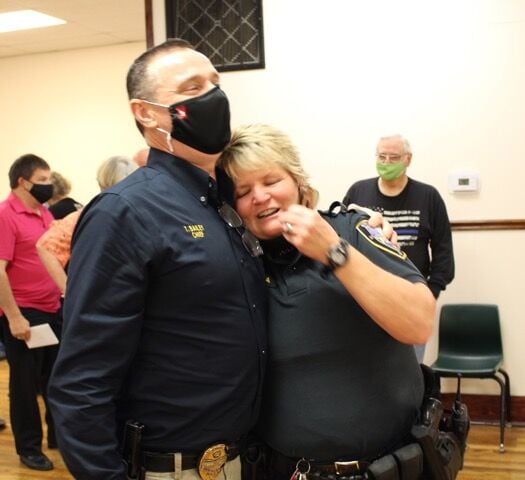 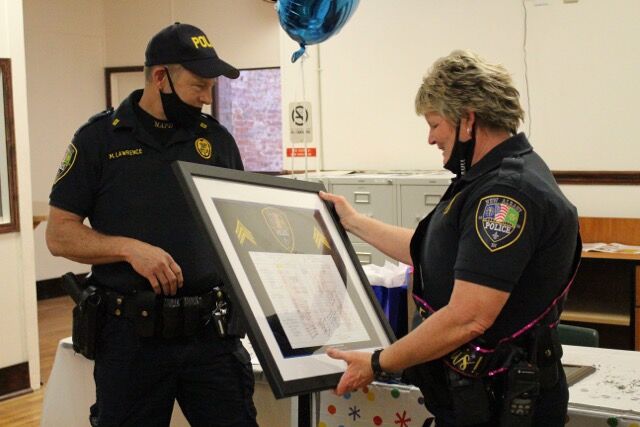 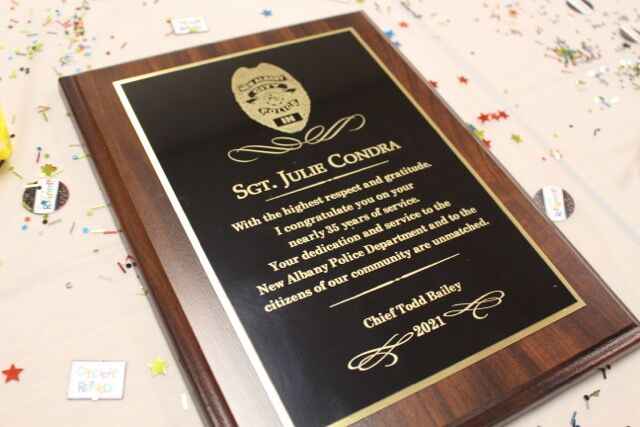 New Albany police Chief Todd Bailey presented this plaque to Sgt. Julie Condra Thursday at a retirement ceremony for her in New Albany. Condra's last day will be in April, after nearly 35 years of service. 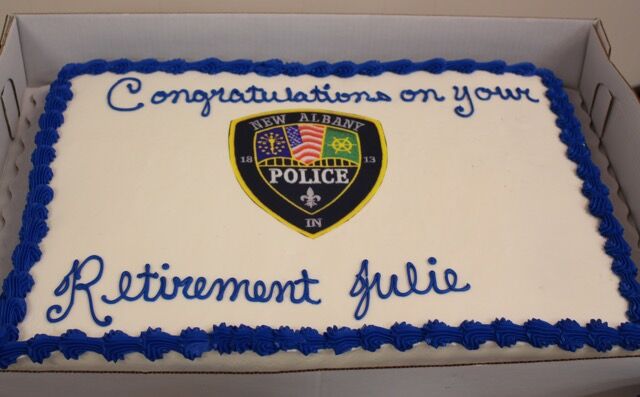 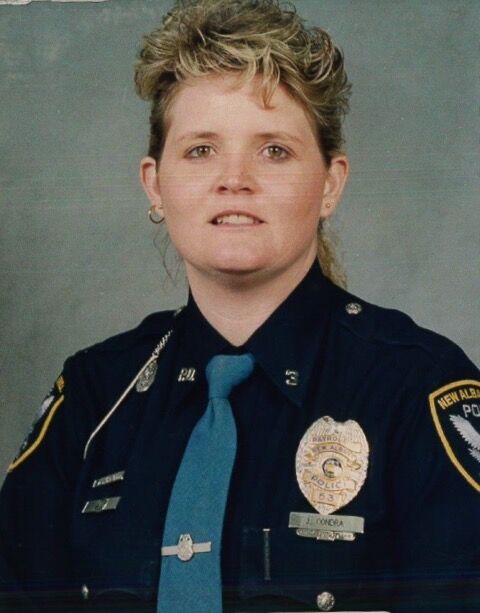 New Albany Police Sgt. Julie Condra will retire in April after nearly 35 years; she started in September 1986. “I can’t imagine my life not doing this career,” Condra said. “It’s been a wonderful career; I’ve loved it.” 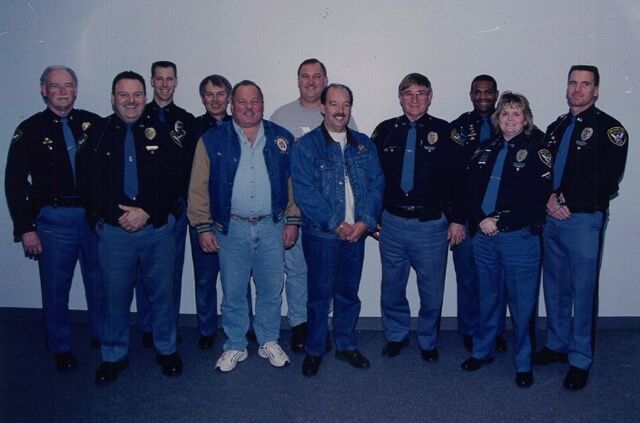 New Albany Police Sgt. Julie Condra hugs Capt. Mike Lawrence, her best friend of three decades, at a retirement celebration for Condra Thursday in New Albany. Condra will be leaving the department in April after nearly 35 years of service.

New Albany police Chief Todd Bailey presented this plaque to Sgt. Julie Condra Thursday at a retirement ceremony for her in New Albany. Condra's last day will be in April, after nearly 35 years of service.

New Albany Police Sgt. Julie Condra will retire in April after nearly 35 years; she started in September 1986. “I can’t imagine my life not doing this career,” Condra said. “It’s been a wonderful career; I’ve loved it.”

NEW ALBANY — In a few weeks, New Albany Police Sgt. Julie Condra will lay down her badge after nearly 35 years of service to the community and head off to her next adventure.

But even though she won’t be there in person on those runs, colleagues say her contributions through more than three decades of police work have left a lasting mark on the department and community as a whole and aren’t going anywhere.

“I think that Julie’s number one contribution to our city is that she was one of the finest negotiators — relatable, courteous, friendly and compassionate — that I’ve ever seen,” New Albany Police Chief Todd Bailey said Thursday at a retirement ceremony for Condra. “She’s the type of police officer who comes around very rarely.”

Condra started with the department in September 1986, following in the footsteps of her stepfather, Tom Burres, who’d started there 20 years before.

“I just looked up to him; he was my role model,” Condra said. “He just meant the world to me and enjoyed the job and just kind of led me in that way.”

From that inspiration, Condra would evolve into the type of police officer who got out into the community, always striving to be understanding in the situations she responded to. She said the work and the things she saw built up a great deal of compassion that she’s carried with her in all aspects of life.

Bailey said these ethics have been evident in Condra’s work — while many departments have moved over to a more proactive community policing approach in recent years, the chief credits Condra with bringing this to New Albany before it was widely talked about.

“We had some programs back when she started, such as Officer Friendly who visited children, but Julie took that to adults and to neighborhoods,” Bailey said. “She was able to, in a very personal way, gain the trust of people so she could help solve or resolve whatever the issue was.”

And Condra has passed that on to others in the department and been a positive influence on the newer officers especially.

“She was able to relay those traits to younger police, and I think you’ll see that in New Albany,” Bailey said. “We have not had problems with the police department abusing authority and it’s because of officers like Sgt. Condra who trained young officers early on that ‘hey, this is a partnership.’”

In August 1999, Condra was named officer of the month by the National Law Enforcement Memorial Fund for quick thinking that may have led to saving a community member from potential violence. The sergeant was leaving a New Albany drugstore when she noticed a suspicious person in the back of a van. Returning to the store, she found the vehicle’s owner and asked if the person should be there. The owner had not been aware he was there.

She’s always been ready to help whether the situation was big, like catching a possible predator in the car, as well as her work with families with domestic issues, which she was passionate about. She’s also led New Albany’s holiday shopping program for kids for the past 15 years.

But her career has been full of smaller things too, such as a few minutes she’d take to help someone out and make her city a better place. Capt. Mike Lawrence, her best friend since they met in 1991, recalled once when Condra made a traffic stop on an older woman he hadn’t seen do anything wrong.

When he asked why, Condra told him the woman’s gas tank lid had been open and she just wanted to let her know.

“She’s always cared about people and animals and always taking care and doing the right thing,” Lawrence said, adding that she’s tried to be a strong, positive influence on youth in the community. “Julie was always there.”

At the ceremony Thursday afternoon, Condra became a little emotional as she recounted what being a New Albany police officer has meant to her.

“This has absolutely been the greatest city to work in,” she said after the ceremony. “The citizens here, for the most part, are all terrific and they’ve all shown me a lot of respect. And I work with the best police officers ever. Our administration, staff...Chief Bailey has been wonderful to me and we’ve always been good friends.”

She said she’s going to miss her first-shift patrol officers a lot — they’ve always had a lot of fun together.

“There were so many good times,” she said. “It’s so mentally and physically draining, but the good times outweigh the bad times.”

She’s also going to miss the people — “going on runs and getting out of the car and people calling me by my first name and saying ‘hey you remember...you really helped me so much,’’’ she said. “I’m really going to miss that stuff.”

But, she said, she knows now is the time to leave — a bittersweet feeling. “I really didn’t want to be 60 years old out here,” Condra said. “I’ve always, always loved my job and everybody here and I still love everybody here and the job. It’s just that with everything going on in the world, I’m just mentally and physically tired and it’s just time to go.”

But leaving the department will make room for another dream — she and her wife, Greta Johnson, already have plans in place to travel the U.S. Along for the ride will, of course, be their two dogs— Blue, an Australian shepherd-huskie mix, and Scooby, a Weiner-Beagle.

“That’s what we’re most excited about is taking them on our adventure,” Condra said.

Looking back at her 34 years and seven months as a New Albany police officer, would she do it all over again?

“You know what, I probably would,” Condra said. “I can’t imagine my life not doing this career; it’s been a wonderful career.”