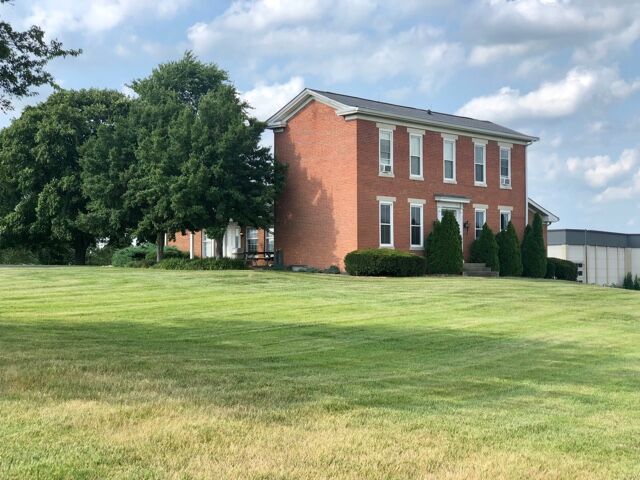 The Smith Farmhouse will be donated to Indiana Landmarks, a historic preservation organization, and according to Hogan Real Estate’s development plans, the home will be relocated to the back of the 4501 Charlestown Road property, facing Lewis A. Endres Parkway. 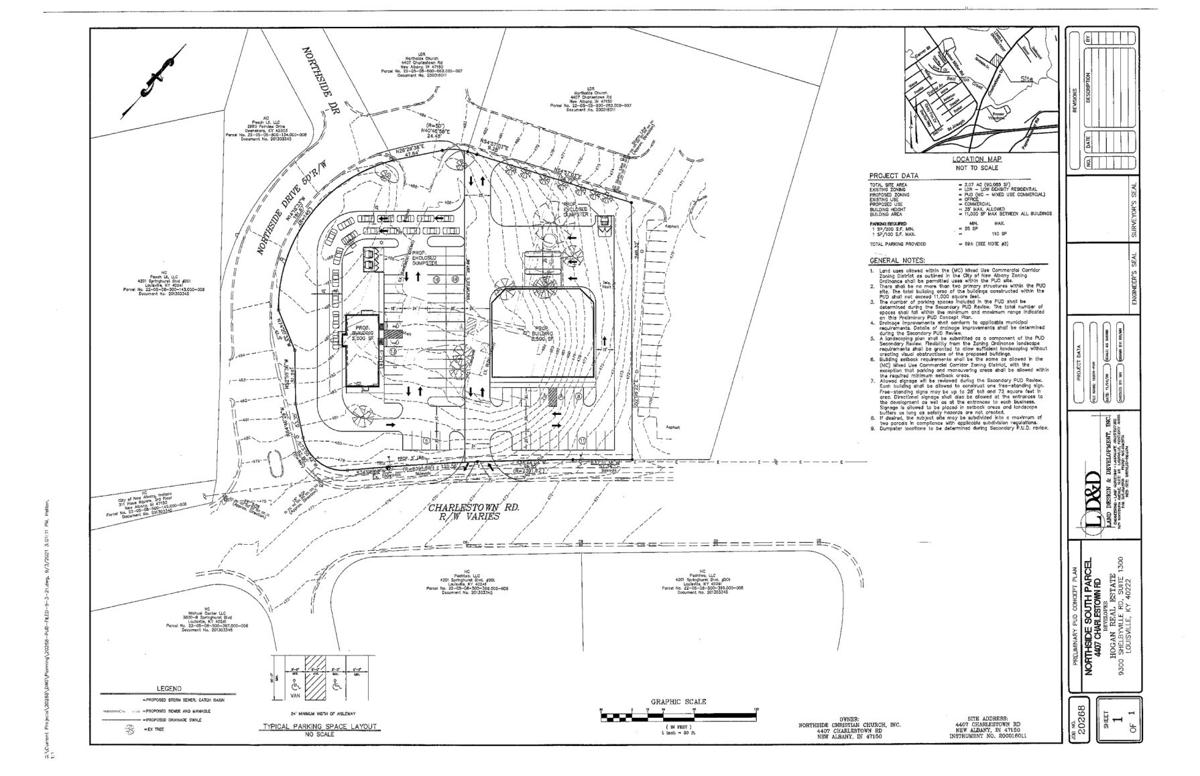 Above are the projected plans for the lot that currently holds the Smith Farmhouse. Another site plan by Hogan Real Estate, the company developing the property, showed that the two buildings could potentially become a Starbucks and a bank.

The Smith Farmhouse will be donated to Indiana Landmarks, a historic preservation organization, and according to Hogan Real Estate’s development plans, the home will be relocated to the back of the 4501 Charlestown Road property, facing Lewis A. Endres Parkway.

Above are the projected plans for the lot that currently holds the Smith Farmhouse. Another site plan by Hogan Real Estate, the company developing the property, showed that the two buildings could potentially become a Starbucks and a bank.

NEW ALBANY — The New Albany Plan Commission forwarded an unfavorable recommendation Tuesday over a request to raze a 160-year-old farmhouse and redevelop the property for commercial use.

Several community members gathered at the meeting with the intent of saving what they described as a well-loved farmhouse along Charlestown Road from demolition by the developer.

The developer of the property, Hogan Real Estate, presented their Planned Unit Development (PUD) request to the commission in hopes of seeking a favorable recommendation to the New Albany City Council.

Some commission members did bring up concerns for historical preservation, curb cuts as well as entrances and exits in the plan.

The commission voted 6-3 to send the unfavorable recommendation. Next, the city council will vote on whether or not the PUD will be granted.

A petition to save the building was started in August by Amanda Frey, the granddaughter of the last owners of the Smith Farmhouse, once she discovered it could be sold to developers.

The house was sold by Frey’s grandparents in the 2000s to Northside Christian Church, with no written stipulations on what could happen with the property. At Tuesday’s meeting, Frey said that while there were no documented restrictions in the deed, her grandparents, Charles and Patricia Phillips, trusted the church as caretakers of the house.

After the property was initially purchased, Northside used the house for office space, but about a year ago the church began working with Hogan Real Estate to develop the property, which would result in the farmhouse being demolished.

Hogan Real Estate’s chief operating officer, Mike Leonard, said that though the company had been working on developing the property for a year, they only realized the significance of the farmhouse after receiving a staff report later into the project.

Leonard told the plan commission that after that realization, the developers took a step back to figure out what could be done to make the project work for everyone. Ultimately, the developers decided that leaving the building where it is does not work within the plan.

“The challenge is, in the context of the project, it just does not make sense for us to do something with the house,” Leonard said. “We would love to help [with] putting it somewhere else, but we gotta be conscious of financial realities in the project as well.”

The company’s lawyer, Alan Applegate of Applegate Fizer Pulliam, said that the developers did have a meeting with Greg Sekula of Indiana Landmarks, a historic preservation organization, this month about relocating the farmhouse.

Applegate said Hogan Real Estate offered the amount of money they would use on demolition, between $10,000 and $15,000, to whoever wanted to relocate the house. Sekula, the southern regional director for Indiana Landmarks, said that Frey got a quote for relocating the house and purchasing land to put it on, and it would cost over half a million dollars.

“To say we’ll give you $15,000 when we’re looking at half a million dollars or more to make a move happen, it just isn’t feasible from the standpoint of others,” Sekula said at the meeting.

“The lack of available land and the cost to move the building, really makes that an offer that’s really not an offer.”

Sekula also noted that the money was also contingent on Indiana Landmarks supporting the company’s development proposal at Tuesday’s meeting.

One issue with the development plan that Sekula brought up at Tuesday’s meeting was that the community never had a chance to come together to try and save the house before they found out it was already being sold to Hogan Real Estate.

“A lot of the shock and concern is generated by the fact that very few people had the opportunity to even know that this property was available for sale. There was never a for sale sign on the property, so there was no opportunity for the community to get together,” Sekula said Tuesday.

Along with Sekula, several concerned community members shared their grievances with the Planned Unit Development (PUD) request. A recurring theme throughout the night was that while residents did not want the house to be demolished, they were not inherently against developing the area, or even including the house in development plans.

“I love New Albany and I want to see it flourish,” resident Pat Harrison said, “But I wish we could make the historical home, that I consider historic, an integral part of the development.”

Harrison said that in her time living in New Albany she has seen many historic buildings be lost to fire and other causes, and that everybody would win if even just the facade of the farmhouse was included in the development plan.

Hogan Real Estate presented two PUD requests on Tuesday, one for the area at 4401 Charlestown Road which includes the Smith Farmhouse, and another for a different property around Northside.

Commission member and city council president Greg Phipps voted against the unfavorable recommendation even though he said he would hate to see the property demolished.

“I think we set a dangerous precedent if we start to intervene on properties that are not governed by the city code of historic preservation,” Phipps said.

Concerned community members do not have many options for saving the farmhouse pending the council’s decision.

If the church’s deal with Hogan Real Estate falls through, Sekula said that Indiana Landmarks would be interested in engaging with Northside to look at alternative ownership strategies that would allow for the farmhouse to be bought by someone looking to protect the property.

It was also mentioned at the meeting by the plan commission’s chief planner, Krisjans Streips, that in order for the house to even be considered for a protected status, it would first have to be annexed into New Albany, as it lies in the fringe area between the city and county.

The second PUD request, at 4405 Charlestown Road, was sent to the council with a favorable recommendation along with conditions recommended by the plan commission staff.