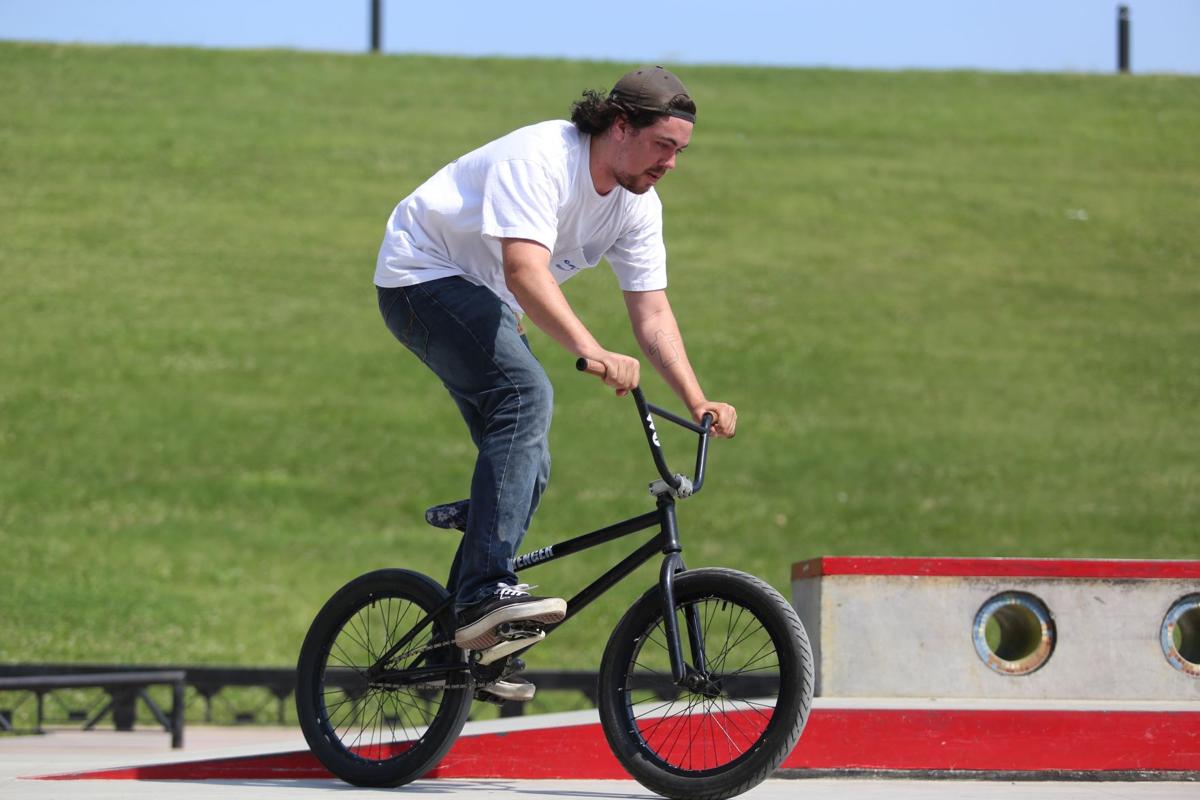 Adam Faris, of New Albany, rides his bike inside the New Albany Skate Park along the Ohio River Greenway on Friday. 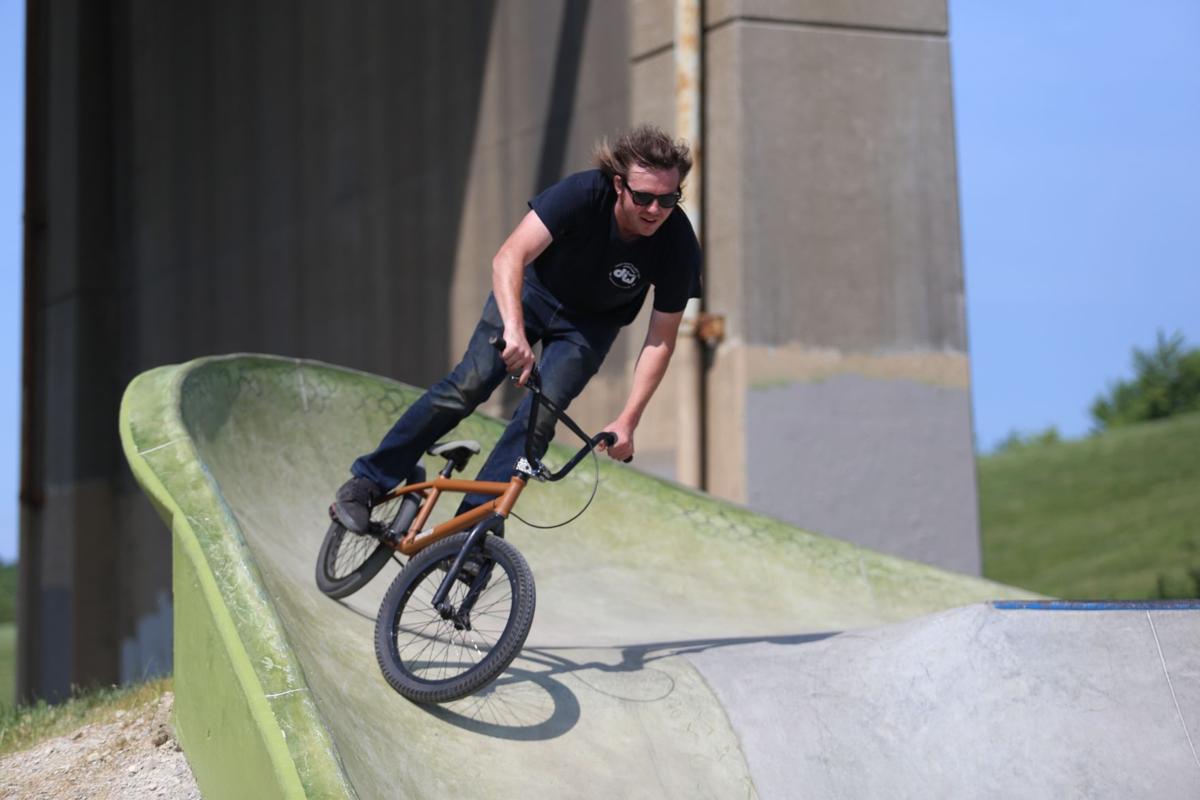 Jake Denham, of New Albany, barrels down a ramp inside the New Albany Skate Park along the Ohio River Greenway on Friday. Denham says he enjoys utilizing the greenway for exercise. 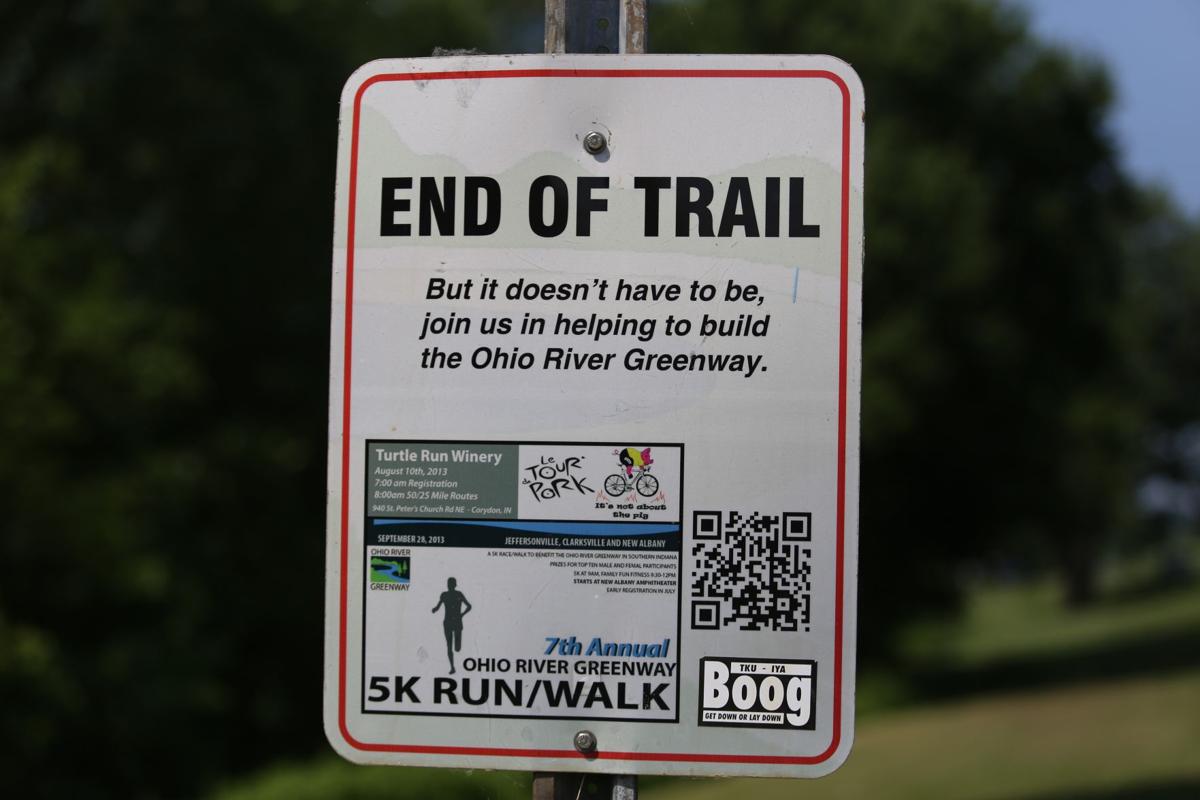 A sign promotes the development of the Ohio River Greenway.

Adam Faris, of New Albany, rides his bike inside the New Albany Skate Park along the Ohio River Greenway on Friday.

A sign promotes the development of the Ohio River Greenway.

NEW ALBANY — Even on a muggy summer morning, the Ohio River Greenway in New Albany was flush with activity.

Jake Denham and Adam Faris turned tricks on their bikes on the ramps inside the New Albany Skate Park on the riverfront. The greenway provides an assortment of activities and connectivity, Denham said.

If the City of New Albany’s long-term plan for the path comes to fruition, the shoreline will connect New Albany to more than its neighboring communities.

Two separate projects are underway that, if completed, would connect Bedford to New Albany via 62 miles of abandoned rail line. Once the pedestrian and cycling path reaches a point near Indiana University Southeast, it would connect with the greenway via a 5.5 mile trail that would trek along Sam Peden Community Park and eventually around Fairview Cemetery before leading to the riverfront.

It’s a mix of rails-to-trails, rails-with-trails and greenway, and city officials believe it could be a game changer for New Albany and the region.

“The abandoned CSX Rail Line is a once-in-a-lifetime opportunity to bring a major trail system to Southern Indiana,” Mayor Jeff Gahan said Friday. “We can’t do it alone, but we have been granted the authority from CSX, the state of Indiana and the feds to start the process.”

There are several hurdles to clear before the vision can become a reality. The city and its partners have been in negotiations with CSX to purchase the rail line between New Albany and Bedford for about a year.

The initial plan sought to use the rail system all the way to the shoreline, but the good news of Northwest Ordinance Distilling’s expansion at the former Pillsbury site means the railroad in that portion of the city will remain in use. Thus, the city wants to use the alternate trail to connect from IUS to downtown.

Additionally, the state has frozen a pool of grant funding for trails projects that New Albany was eying to help with funding the project. City officials remain hopeful that funding will be restored once the pandemic eases.

Right-of-way purchases will also be needed for the downtown connection, but New Albany Redevelopment Director Josh Staten said the potential benefits of the sizable trails project are appealing.

“I think people are just now starting to realize the potential for what the Ohio River Greenway, the rails-to-trails project, and a great connected trails program can do throughout the city,” he said.

As work on the greenway continues, more areas of Southern Indiana are being opened to biking, walking and exploring. On Tuesday, the New Albany Redevelopment Commission approved design for the next phase of the effort, which will include providing access to the pathway from neighborhoods around Slate Run Road and Beharrell Avenue.

The city is also making progress on cleaning up the former QRS Recycling site along the pathway, which will help solidify the western-most portion of the pathway.

“That’s going to be a huge boost for us on the greenway,” Staten said. “It has the potential to be a great park for that part of town as well as anchor for the greenway.”

Though work on the greenway and the rail project continues, it’s an effort that could take several years to accomplish. But Gahan said the Ohio River Greenway Commission and others have been dedicated to improving the area’s shorelines for decades, and their passion paid off.

He credited Caesars Foundation of Floyd County for donating millions of dollars for the greenway.

“They understand it is truly a regional project that promotes health and fitness, tourism, economic development, conservation and overall quality of life,” Gahan said, as he also pointed out the contributions of the Shine to the greenway.

The overall project — creating a connection between Bedford and the New Albany shoreline — is an exciting proposition and one that the city is committed to pursuing, Gahan continued.

“We are thrilled at the chance to possibly launch a new trail system that connects New Albany through one of the most scenic landscapes of Indiana,” he said. “We will share our shoreline, our history, and our downtown, and we will gain access to the natural beauty and hospitality of our neighboring communities. We are also thrilled at the plans and design that we see in Clarksville and Jeffersonville.”