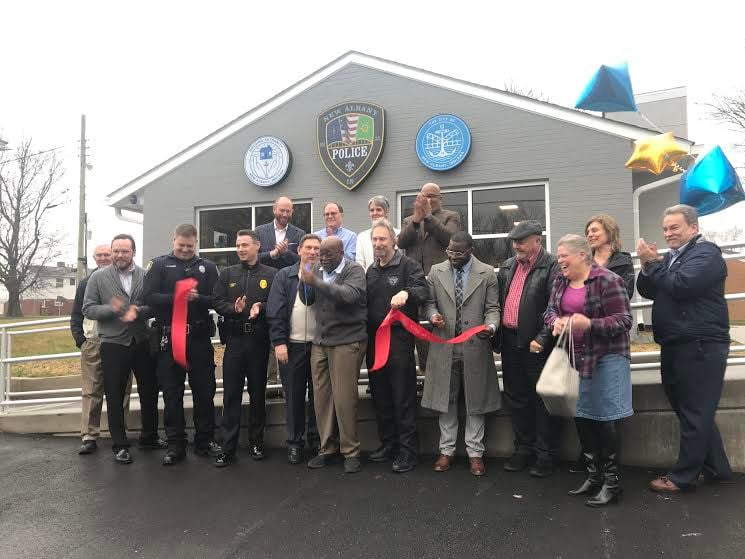 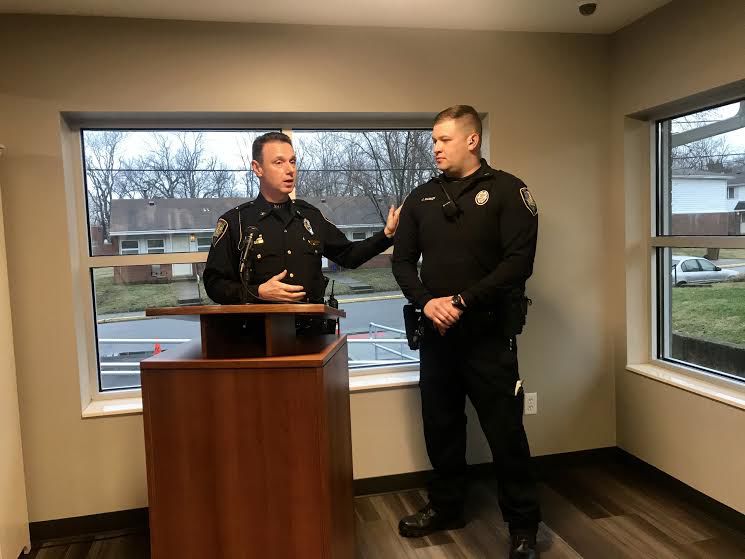 NEW ALBANY — For several months a duplex at a New Albany Housing Authority (NAHA) residential campus sat vacant, burnt out by a fire that rendered it unusable.

Business continued as usual, with the NAHA building at 300 Erni Ave. serving as a community gathering point for residents of the neighborhood. NAHA Director David Duggins said it wasn’t uncommon to see a lot of neighborhood kids running down the streets during after-school hours and over the summer.

Duggins wanted to offer them more, and he decided to utilize that burnt down building to do so.

“Going on almost three years ago, we brought an officer on from New Albany Police Department whose purpose was to be engaged with the locals around here,” Duggins said. “The kids and the family know them. What we wanted was a more warm and inviting area. We decided to go with this [building].”

On Monday, city officials gathered at Erni Avenue to unveil a new safety center for the community. The fresh structure will allow neighborhood kids and teenagers to take part in a number of community activities — including everything from playing games to simply hanging out.

A big driver behind the project, Duggins said, was changes to the local school schedule.

“When we went to two weeks of fall break and two weeks of spring break, our parks director came to me and said that we need to do something with those two extra weeks now,” he said. “A lot of times, those kids are going to go 10 days without breakfast and lunch, so we need to do everything we can.”

Without that partnership with the parks department and the New Albany Police Department, Duggins said none of this would be possible.

NAHA will also have a point person on site in education resources coordinator Stephen Shannon. It’ll be Shannon’s duty to serve as a sort of liaison between the families, the schools and the housing authority.

Students from nearby schools like Green Valley Elementary, Fairmont Elementary, Scribner Middle School, Hazelwood Middle School and New Albany High School will be the main targets for after-school programs, since many live in the neighborhood.

“We’re trying to create a safe space for our students to come after school, where you can get some tutoring or mentoring help,” Shannon said. “Just creating an energetic place for them to come to feel loved and feel safe. Also, to tear down that barrier between cops and civilians.”

To fulfill that last part of Shannon’s goal, the New Albany Police Department will be stationing one officer — Jake Hannon — at the new facility.

Chief Todd Bailey said he fully supports the idea of the safety center.

“Most of all, this is a safe place for residents and children to meet, congregate and utilize to have an open dialogue with our campus officer,” he said. “Officer Hannon’s office is in this building, so it’ll give residents more opportunity to have that one-on-one interaction, if they do require some assistance from Officer Hannon.”

With how spacious and fresh the new building is, Bailey said he can have meetings or roll call there every now and then. Those inviting surroundings will make his officers feel comfortable, and that same atmosphere will be extended to the public.

It’s Bailey’s hope that neighborhood kids feel comfortable, too, and that a positive relationship can be cultivated between them and the police.

Shannon said that he believes the positive setting in which interactions with police officers will occur at the safety center could help erase “stigma” and “preconceived notions.” Young people will have the opportunity to interact with police in a casual manner, which could go a long way in bridging the community together.

“Most of the time when you see [police officers], it’s a pullover or a home visit,” Shannon said. “Just to be able to see them out in a friendly environment that’s not in the back of a police care is more welcoming to the community. They’re speaking to the kids, shooting basketball, helping them with homework, and things like that.”