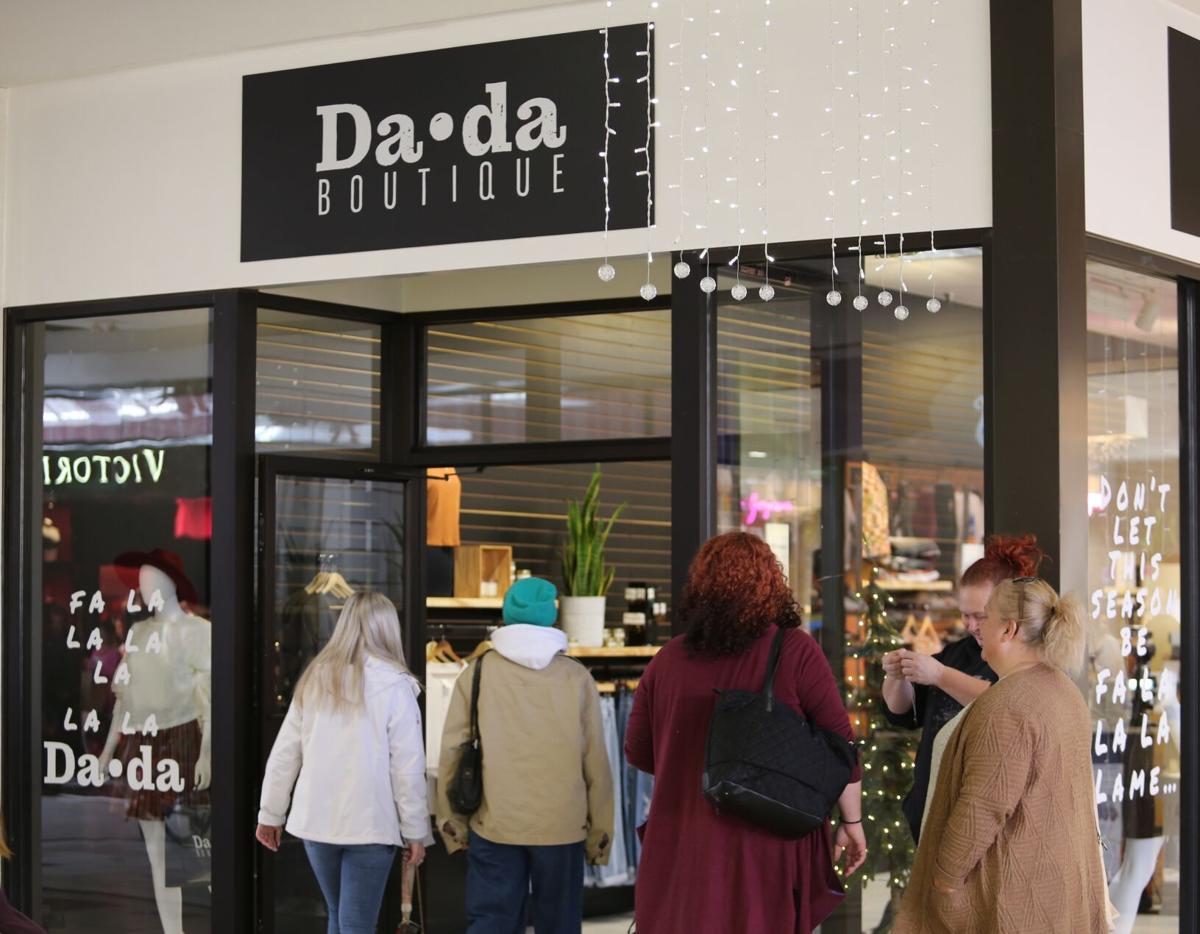 Dada Boutique, also on Pearl Street in New Albany, is open in Green Tree Mall in Clarksville for the holiday season, from Nov. 1 until Christmas. 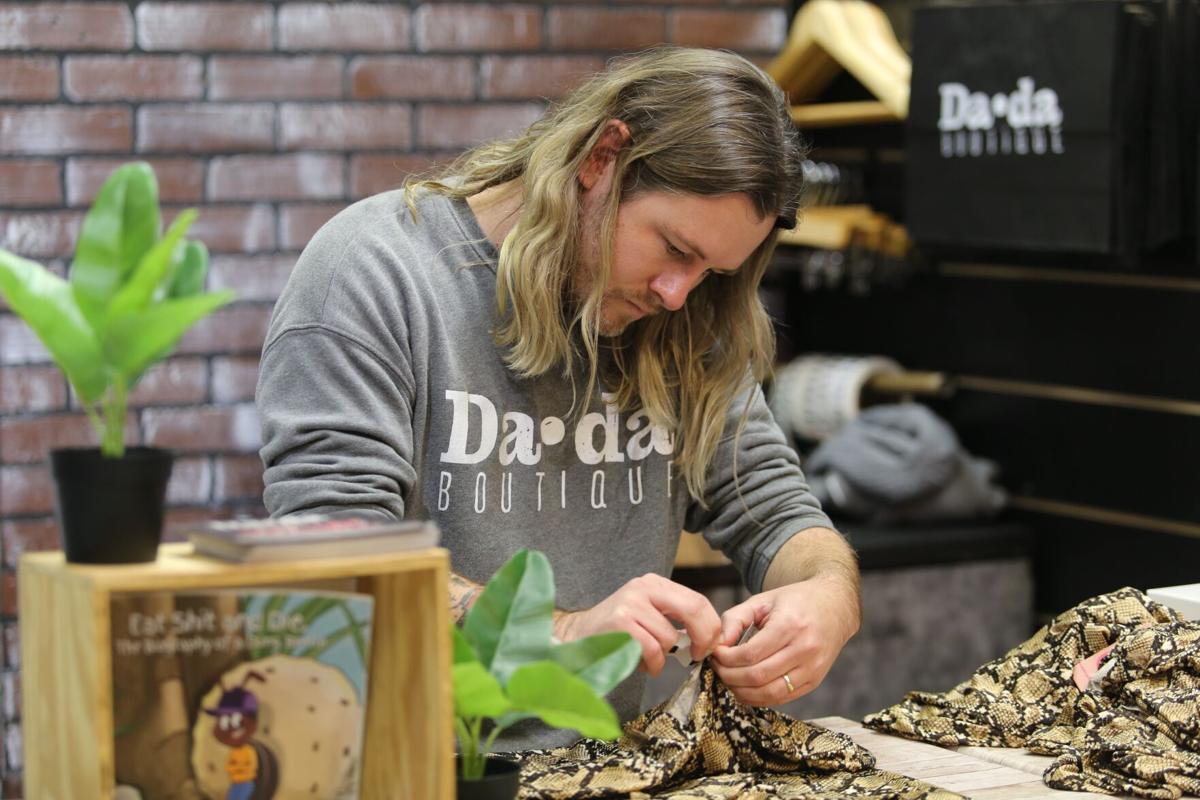 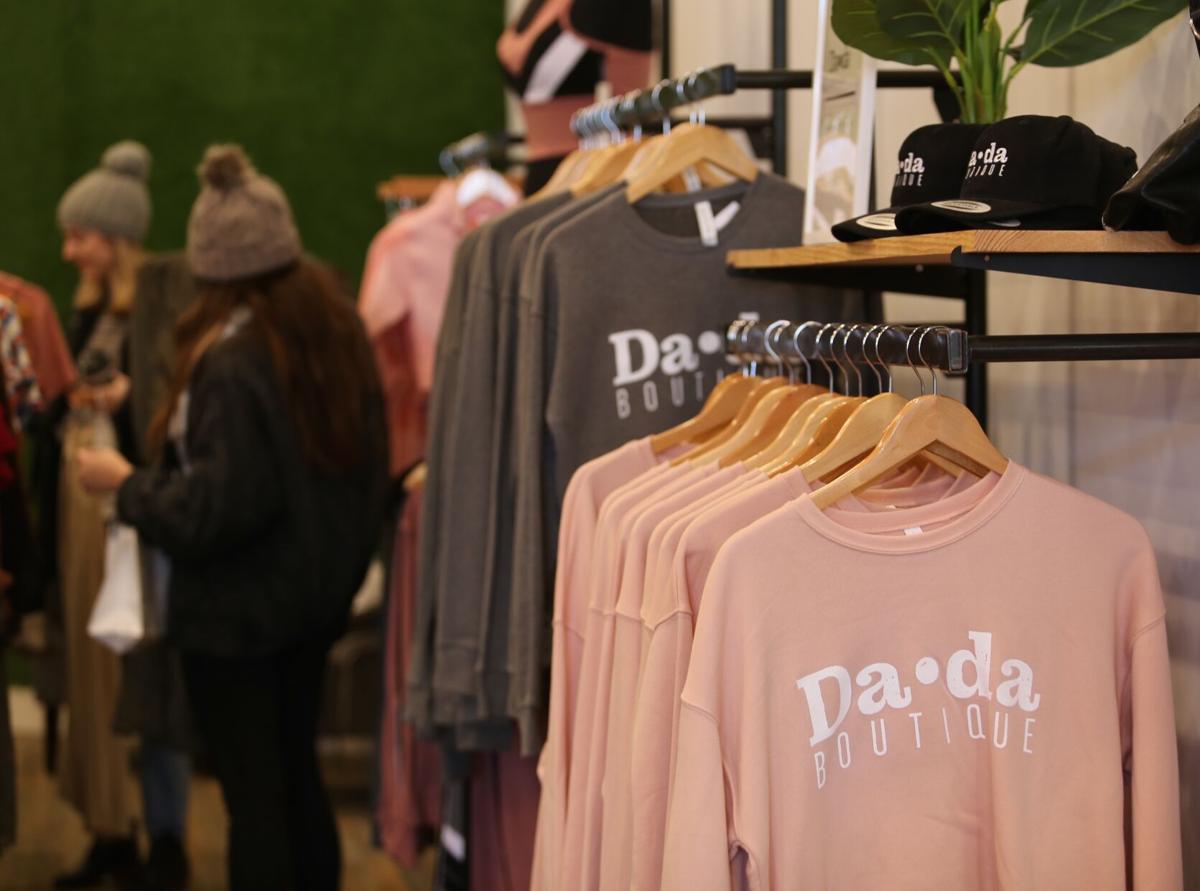 The Dada Boutique location in New Albany remains open while the pop-up shop is in Clarksville. The two shops each have exclusive items that they are hoping draw customers to both stores. 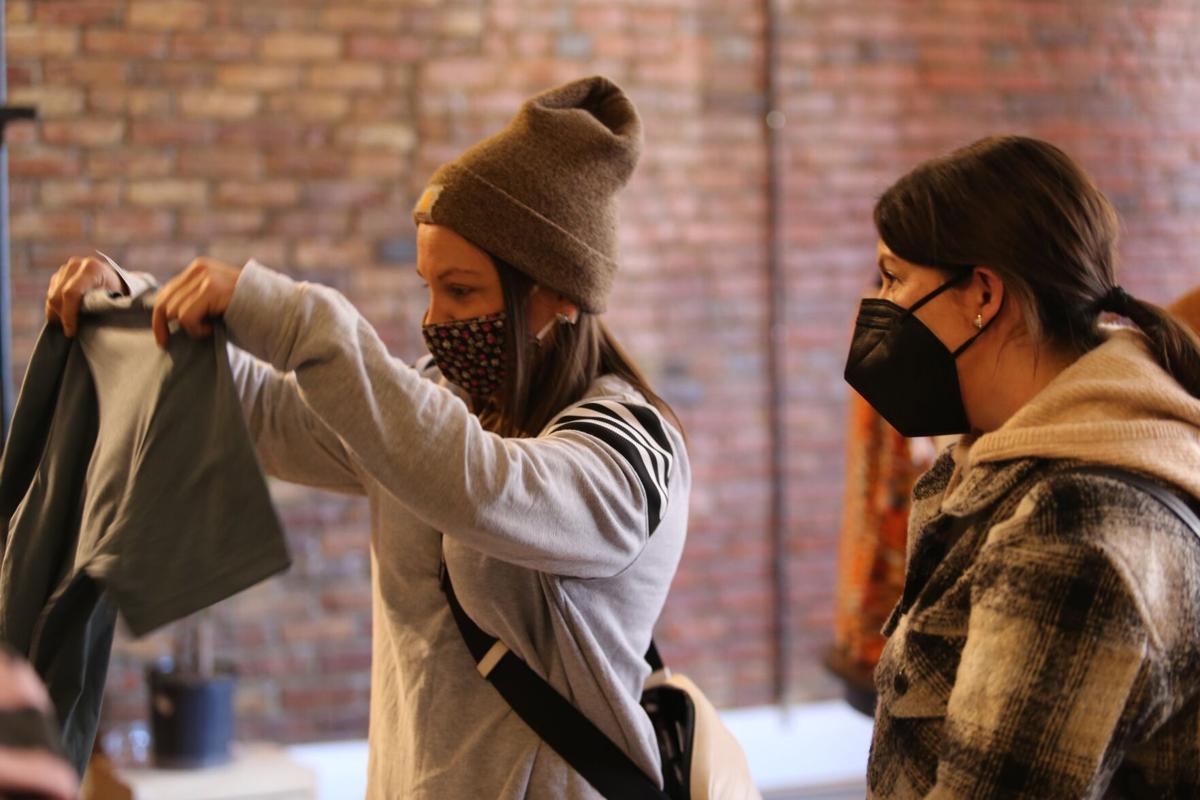 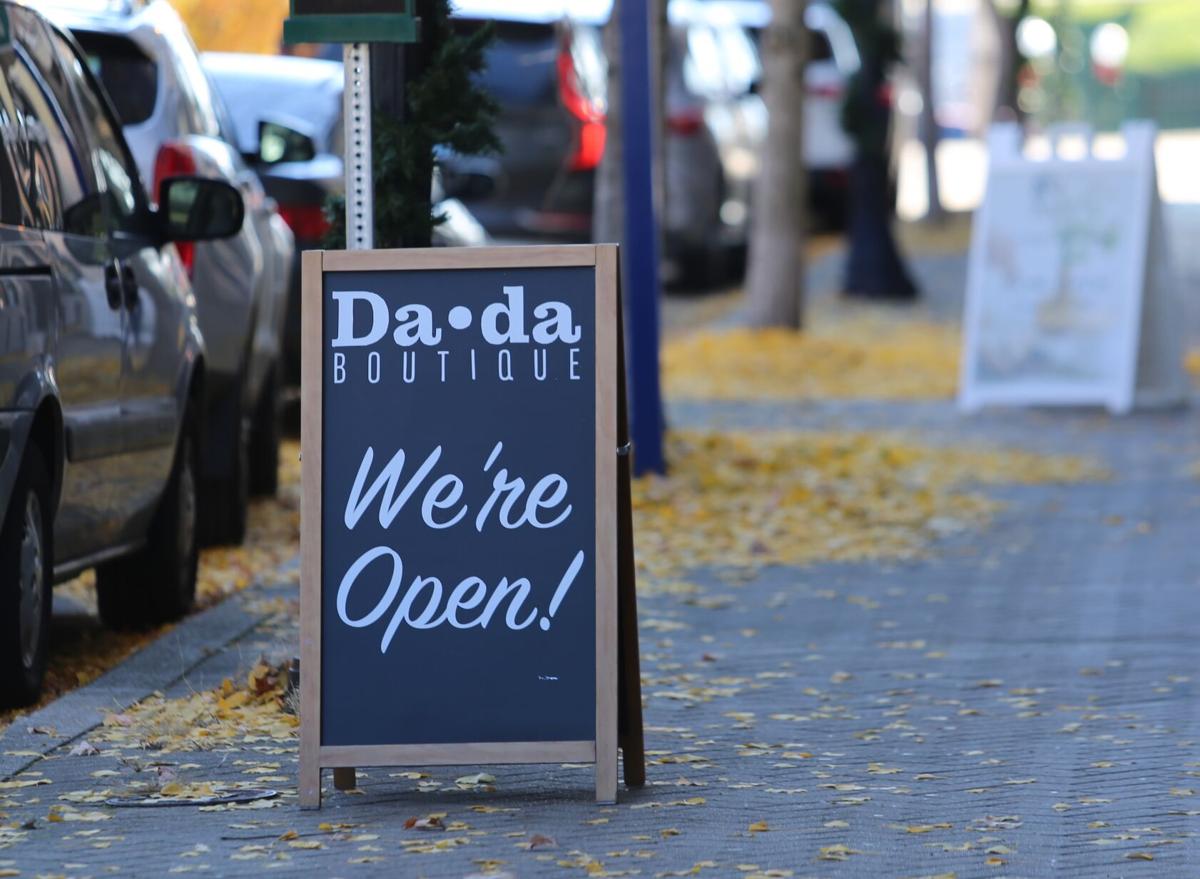 The Dada Boutique location in New Albany will take part in Small Business Saturday by offering a $20 gift card with a $100 purchase. The store is open at 219 Pearl Street on Tuesday through Friday from 11 a.m. to 6 p.m. and on Saturdays from 10 a.m. to 5 p.m.

Dada Boutique, also on Pearl Street in New Albany, is open in Green Tree Mall in Clarksville for the holiday season, from Nov. 1 until Christmas.

The Dada Boutique location in New Albany remains open while the pop-up shop is in Clarksville. The two shops each have exclusive items that they are hoping draw customers to both stores.

The Dada Boutique location in New Albany will take part in Small Business Saturday by offering a $20 gift card with a $100 purchase. The store is open at 219 Pearl Street on Tuesday through Friday from 11 a.m. to 6 p.m. and on Saturdays from 10 a.m. to 5 p.m.

SOUTHERN INDIANA — Typically only located on Pearl Street in Downtown New Albany, Dada Boutique has broadened its reach for the holidays with a pop-up shop in Clarksville’s Green Tree Mall.

The temporary location opened up for business Nov. 1 and will stay open until Christmas, reaping the benefits of holiday shopping and Black Friday crowds.

In the center of the mall, sandwiched between Buckle and Kay Jewelers, Dada Boutique has been introducing a new demographic to the shop’s style.

Byrn and assistant manager Mattea Marler both noted that the customers they see in the mall are usually much younger than those they see in New Albany.

“We have a much younger demographic at the Green Tree location than we do at this location. Not that it’s too much of a difference, but we see a lot more younger teenagers coming in with their parents or grandparents,” Marler said.

Because it is in the mall, Byrn said, the shop is reaching a lot of new people and it is more accessible.

“Probably eight out of ten people who come into the store in Green Tree, have no idea that we exist in Downtown New Albany,” he said, “We are reaching a lot of new people that just didn’t know we existed before and who also are not interested in going downtown half the time.”

Though some customers might not be interested in going downtown, Byrn still lets all of the customers know where they can find Dada Boutique year-round.

The 219 Pearl Street location has remained open along with the pop-up shop at its regular hours.

Byrn said that they have been fortunate with their staffing to be able to run both shops simultaneously. Even when they needed to hire new associates for the pop-up, he said that they did not have any problems with the process.

To draw customers from one location to the other, each shop has some exclusive items that cannot be purchased at the other, whether it is an entire style or just the color of an item.

While this tactic is meant to work both ways, Byrn said that it is used a little more to direct people from Clarksville to New Albany, so that people know where their permanent location is.

“We are hopeful that they will then become lovers of our store and just shop us wherever we go,” he said.

Marler said that they have heard from numerous people that they decided to come check out the downtown shop because they had already visited the Green Tree location.

On Friday, Byrn spent his shift working in the mall, unpacking that day’s shipment and letting customers know about the Black Friday special of buy one, get one half off.

“We were not expecting it to be as busy on Black Friday here as the pop-up shop...although they have a lot more foot traffic coming in, we’re making a little bit more sales here,” Marler said.

Earlier in the day, Byrn said that Black Friday had been really interesting.

“Of course in the mall people come for those big retail names that you’re used to seeing: the American Eagles, the Victoria Secrets, Bath and Body Works — those people who are known for being aggressive with their promotions during the holiday season,” he said.

Byrn said Dada Boutique did not get the movie-like rush of customers pushing through the shop’s door when the mall opened, but it was later when people were leaving the bigger retail stores that they saw the store begin to fill up.

“People are rushing to the malls to get those familiar brands that they know and love, but they’re finding and discovering us along the way,” Byrn said.

Byrn said he wants people to know that they are appreciative when customers choose to shop small instead of at big shops, particularly noting big online sellers, like Amazon.

“So much of it obviously stays in our own community and helps us, as small business owners, so much and supports our families,” Byrn said.

For Small Business Saturday, at the downtown store, Dada Boutique will offer a $20 gift card for every $100 spent, on top of doing small individualized speciality sales.

“Where we really found that that’s helpful is in those months, those slower months like January and February,” he said, noting that people will be encouraged to return “because they have a gift card burning a hole in their pocket.”

In the mall on Saturday, customers can expect to see a buy-one-get-one-free sale on graphic T-shirts as well as 20% off on select styles.

Along with it being Small Business Saturday, the boutique will also celebrate its fourth anniversary Nov. 27.

While the mall was intended to be a temporary location for Dada Boutique, Byrn said there is a possibility the shop could move into the location permanently.

The boutique got started in the mall initially because the leasing manager was looking to have a consistent shop in the space throughout the holidays, according to Byrn. The location where Dada Boutique is now was rented out to a new vendor every week, he said.

Byrn went for the opportunity, hoping to reach a new community and clientele and test the waters of mall traffic.

Marler said that she thinks keeping the mall location permanent would be a great opportunity both for Dada Boutique and Downtown New Albany.

“I think it would be amazing not only for our location down here but also for all the businesses, for people to realize that the mall isn’t the only option anymore, and there’s other businesses that aren’t online,” Marler said.

Whether the boutique intends to make its stay in the mall permanent, it will still be cleared out after the initial closing date on Christmas.

Byrn said that the space has been “anything and everything under the sun temporarily” and each place has left its mark within the walls.

“We would need to completely gut it and remodel it to give it some new life,” he said.

When Byrn was getting ready for his temporary move into the mall, he said they threw some paint up and did a quick redo, but “nothing too crazy.”

Byrn said they also did some branding, noticeable in the cowhide rug, matching the one on the floor in New Albany, and the pink neon “Hello gorgeous” sign that is reminiscent of the “If looks could kill” sign hanging four miles away.

The New Albany shop is open from 11 a.m. to 6 p.m. Tuesday through Friday and 10 a.m. to 5 p.m. Saturdays. The Green Tree Mall location is open seven days a week with the mall hours.