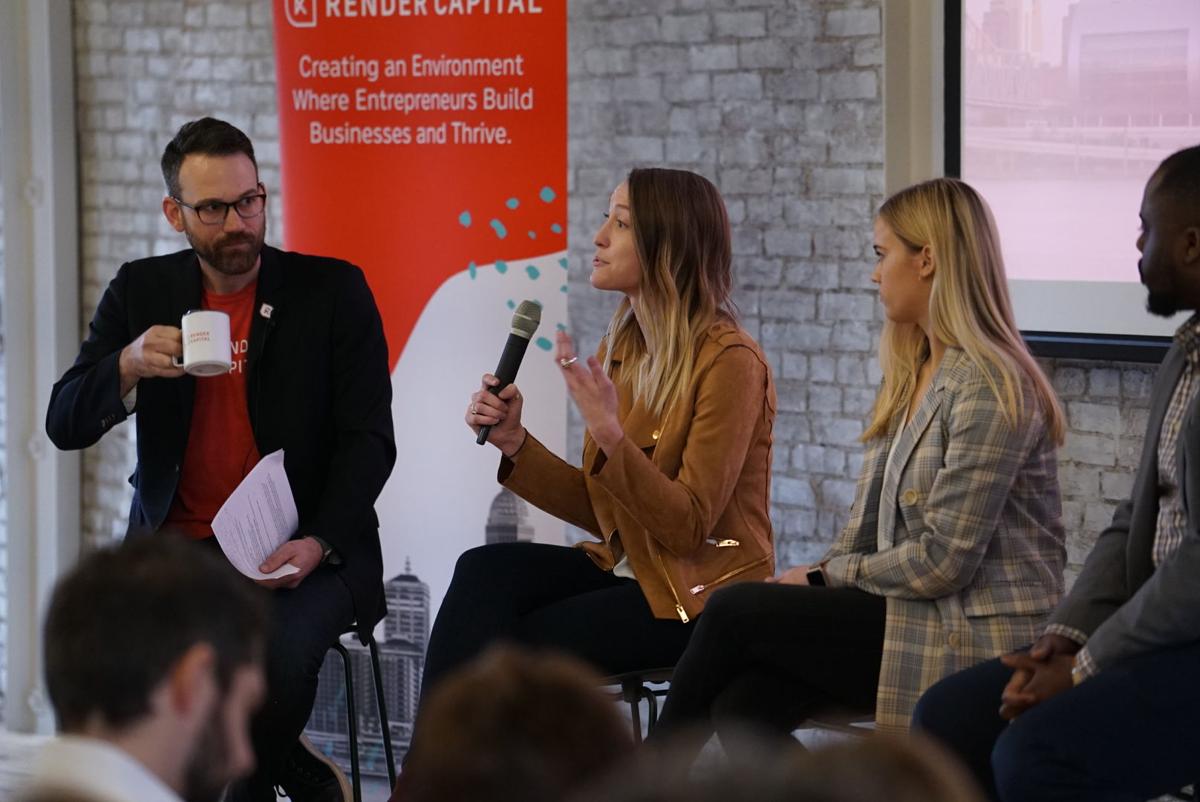 Access Ventures managing partner Bryce Butler and representatives of Render Capital outline plans for how the $15 million regional fund will boost entrepreneurship in Southern Indiana and Louisville in the coming years. 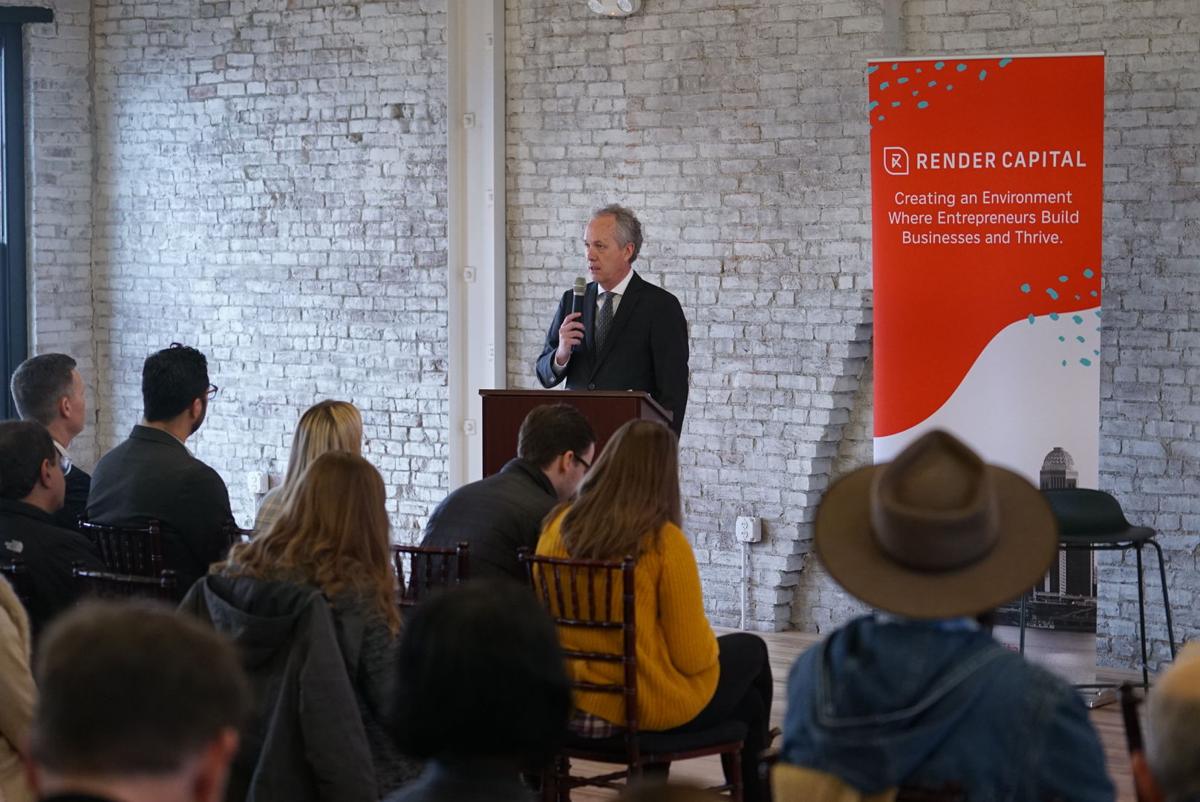 At Tuesday’s launch event for Render Capital, Louisville Mayor Greg Fischer said that new companies coming to Louisville and Southern Indiana benefits the region as a whole, not just the individual communities.

Access Ventures managing partner Bryce Butler and representatives of Render Capital outline plans for how the $15 million regional fund will boost entrepreneurship in Southern Indiana and Louisville in the coming years.

At Tuesday’s launch event for Render Capital, Louisville Mayor Greg Fischer said that new companies coming to Louisville and Southern Indiana benefits the region as a whole, not just the individual communities.

LOUISVILLE — When looking to get their business ideas off the ground, one of the biggest obstacles for entrepreneurs is finding the money to get started.

It’s not uncommon for traditional funding methods to fall through for the unestablished shakers and movers of the future. Banks may not always be willing to lend, and corporate partnerships come with the chance of diluting the spirit of the initial idea.

To provide a solution to that problem in Southern Indiana and Louisville, Access Ventures has launched a new locally-focused fund called Render Capital that aims to benefit both sides of the Ohio River.

On Tuesday, representatives from the group and surrounding communities gathered at Story Louisville to share details about what the future holds for the $15 million fund.

“It’s a strategy that we started working on about a year and a half ago, recognizing that of all the ingredients in our local bi-state economy, risk capital at the early stages was a major problem,” Access Ventures managing partner Bryce Butler said. “Entrepreneurs were doing great, mentors were stepping up and we were building density through the Root and Story, but we recognized that capital was a major inhibitor for companies to really grow their businesses and see a path to success here.”

The main focus of the initiative, Butler said, is to move money into the hands of entrepreneurs looking to grow in the river communities. Part of that involves equity, debt and revenue-based financing of up to $250,000 for local startup companies.

While all quality ideas will be considered for funding, Butler said that Render sees the value in investing in the “strength sectors” of Southern Indiana and Louisville. Those industries include, advanced manufacturing, health innovation, logistics and food and beverage.

“The $15 million is broken down into several vehicles,” Butler said. “We’re working on a project for entrepreneurs of color specifically, where we have a commitment to that effort. It’s kind of broken down into how do we provide solutions for Main Street, normal-growth companies that still need capital but have been denied a loan from the bank, all the way up to high-growth companies that need investment.”

Roughly $7 million of the group’s initial funds will be used for general investment. Another $4 million will be devoted to a simultaneous initiative announced at Tuesday’s event.

Tuesday marked the launch of the Render Competition, which will award eight companies $100,000 by the end of the year.

“When we’ve surveyed the market, we’ve seen that the early-stage capital for these kind of startups can be smaller amounts of money — maybe $20,000 to $30,000,” associate Marigrace Ragsdale said. “If they’re already showing great success, they can tap into higher investments. But there’s this sweet spot that’s missing. We feel $100,000 is the right amount to make an impact on their business and allow them to take it to the next level.”

The kicker, however, is that the companies must have a presence in Southern Indiana or Louisville or be willing to move here.

“They can already be here, but if they’re going to relocate, then they have to come here for at least a year,” Ragsdale said. “Hopefully, our support and our money will help them stay here and recognize the momentum we have.”

Starting March 10, applications will be accepted for the competition. Ragsdale said the three-stage process should last around six or seven months.

Winners will be announced in September, with those awarded being required to move to the area by November. Money has been allotted to conduct the contest for five years, giving $100,000 to eight winners annually.

In the coming years, the money will either attract or expand the operations of 40 companies in the area. Whether they locate in Louisville or Southern Indiana, Butler said the region as a whole will reap the benefits.

It’s his hope that the new initiative could solidify the significant economic relationship shared by the neighboring states.

“That’s a big river, so part of the goal of this is to try to break that down,” Butler said. “Where the public sector has limitations because of geographic boundaries, the private sector doesn’t... We’re really trying as best as we can to build cross-river partnerships, working as much as we can with the states of Indiana and Kentucky and with all of the local municipalities. If it happens in Jeffersonville, it’s going to have a residual benefit on Louisville, and vice versa. The future of our economy is regional. It’s not a Kentucky economy and an Indiana economy.”

Echoing that sentiment was Louisville Mayor Greg Fischer, who spoke to those in attendance at Tuesday’s launch. Fischer said his administration has focused on bridging the economies of Louisville and Clark and Floyd counties through working with groups like One Southern Indiana and Greater Louisville Inc.

Having a new opportunity like that offered by Render Capital, he said, will increase the potential of those looking to spread roots along the Ohio River.

“America is made up of metropolitan economies,” Fischer said. “We just happen to have a river that runs through two states. People should understand that that is not any type of barrier towards economic development. People move back forth over the river like they move through neighborhoods in Louisville. We embrace that as just part of our metropolitan economy.”