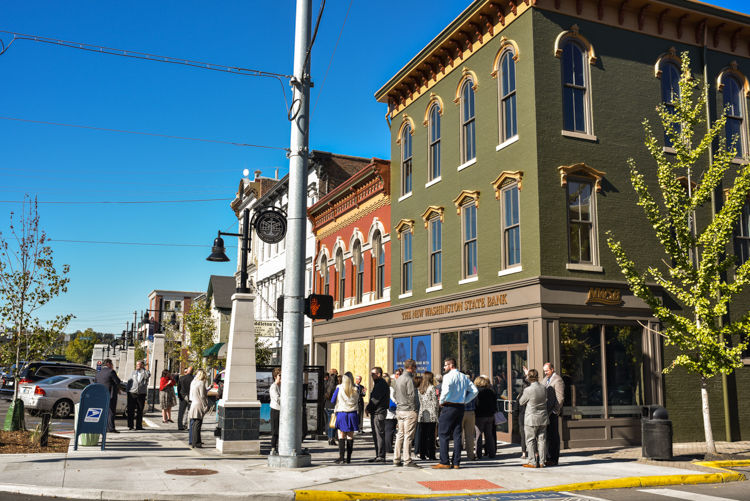 Attendees gather out front of the New Washington State Bank, which held its grand opening Thursday in downtown New Albany. 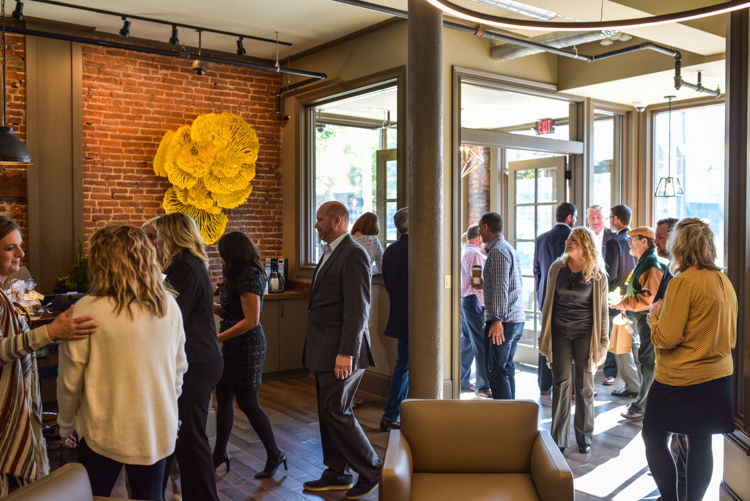 New Washington State Bank employees and guests mingle in the lobby of the newly-opened bank in downtown New Albany. 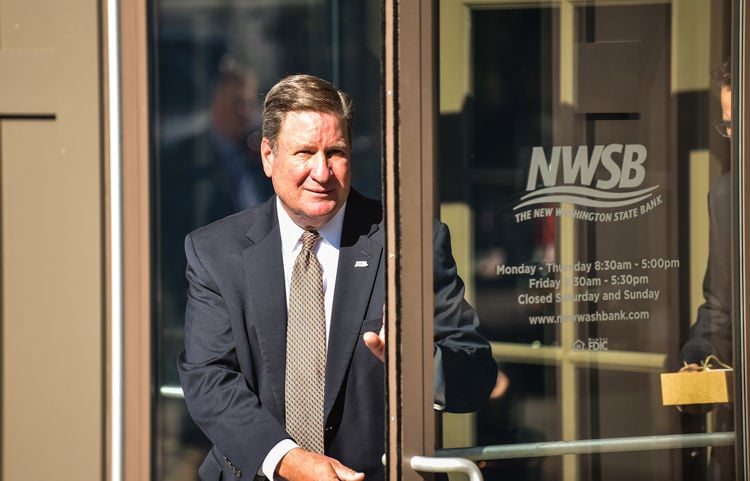 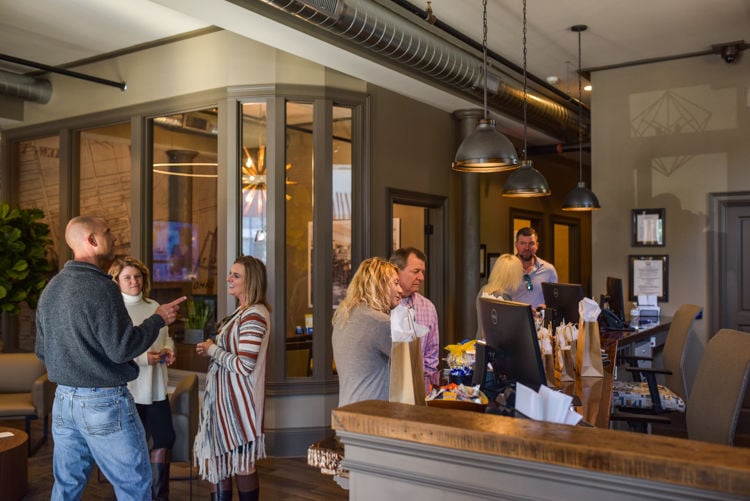 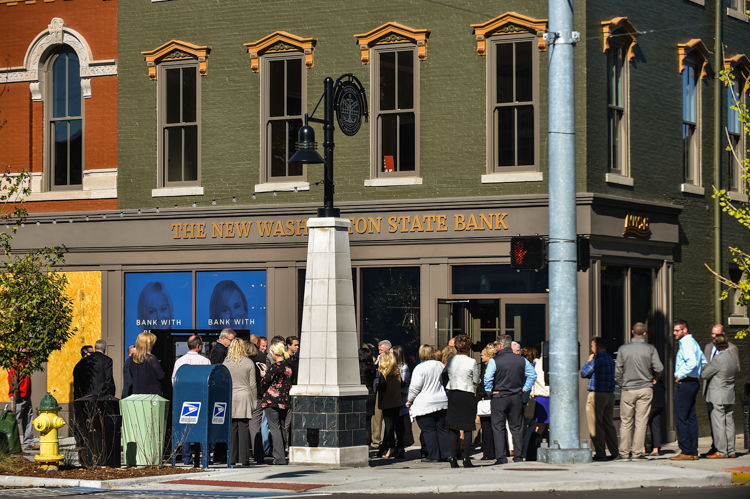 Attendees gather out front of the New Washington State Bank, which held its grand opening Thursday in downtown New Albany.

New Washington State Bank employees and guests mingle in the lobby of the newly-opened bank in downtown New Albany.

NEW ALBANY — Those passing through downtown New Albany over the past months have probably noticed the changes to the historic building at the corner of Market and Pearl streets. But after months of renovations, the first tenant in the redeveloped building has opened its doors.

New Washington State Bank has officially opened its new location on the first floor of 123 E. Market St., the location formerly home to Jimmy's Music Center. The entire building has been transformed inside and out over the past few months, and on Thursday, the bank, along with representatives from One Southern Indiana and the City of New Albany, celebrated a ribbon cutting.

The 1,976-square-foot branch is the 11th Southern Indiana location for the local bank, which was founded in 1908 in New Washington. The bank also has branches in Henryville, Charlestown, Borden, Jeffersonville, Sellersburg, Scottsburg and River Ridge.

"That's what we lay our foundation on, and we feel if we can come in and do our job, we can provide a return not only to our shareholder, but also to the communities we serve," he said. "We have a very good reputation in serving the communities we're in right now."

He said there isn't a need for a 10,000 square-foot building with four drive-through lanes in downtown New Albany, but there is a need for a "good footprint and quality people."

New Albany Mayor Jeff Gahan said he takes it as a "huge positive" that NWSB chose to add a bank in downtown New Albany.

Steve Resch, owner of Resch Construction, the owner of the historic building, has been working for the past five months to renovate the building, which included significant changes to its facade and interior.

"Our goal was to not make it feel like a typical bank, and I think we made it happen," he said. "It has a nice, warm, homey feel to it."

New Albany City Councilman Dave Barksdale, who is also the Floyd County Historian, said he welcomes NWSB to New Albany, and he discussed the history of the recently-renovated building at Thursday's ribbon cutting.

The structure, known as the Briggs Block, was built in 1872 by a local entrepreneur named Ben Briggs, and it had a grocery store on the first floor, offices on the second floor and a public hall on the third floor, he said. It later became a Piggly-Wiggly grocery store around 1920, and it later served as F. W. Woolworth Company 5 & 10 Cent Store until 1973. Jimmy's Music Center recently moved from the location, and it is now under new ownership as the Kentuckiana Music Center at 428 Pearl St.

In addition to the bank, the Market Street building also includes retail space and office space, and a music venue is planned for its basement.

State Rep. Ed Clere, R-New Albany, also praised the building said Resch has risen to the challenge of rehabilitating the downtown building, and he has "added this to the downtown that has become his canvas." He said he is also thrilled to have NWSB return to New Albany — it has been about a decade since the bank had a location in the city.

"New Washington is one of a dwindling number of local banks, and they are, as a local bank, they are uniquely positioned to respond to the needs of this community, and I see them doing this all the time," he said.

Linda Darleen Gordon, 74, passed away peacefully on Friday, March 27, 2020 at Autumn Woods Health Campus in New Albany, Indiana. She was born on June 1, 1945 to the late Leroy and Dora Hobbs (Bailey) in Sanford Florida. Linda worked at the Bales Motor Company for over 20 years where she was …