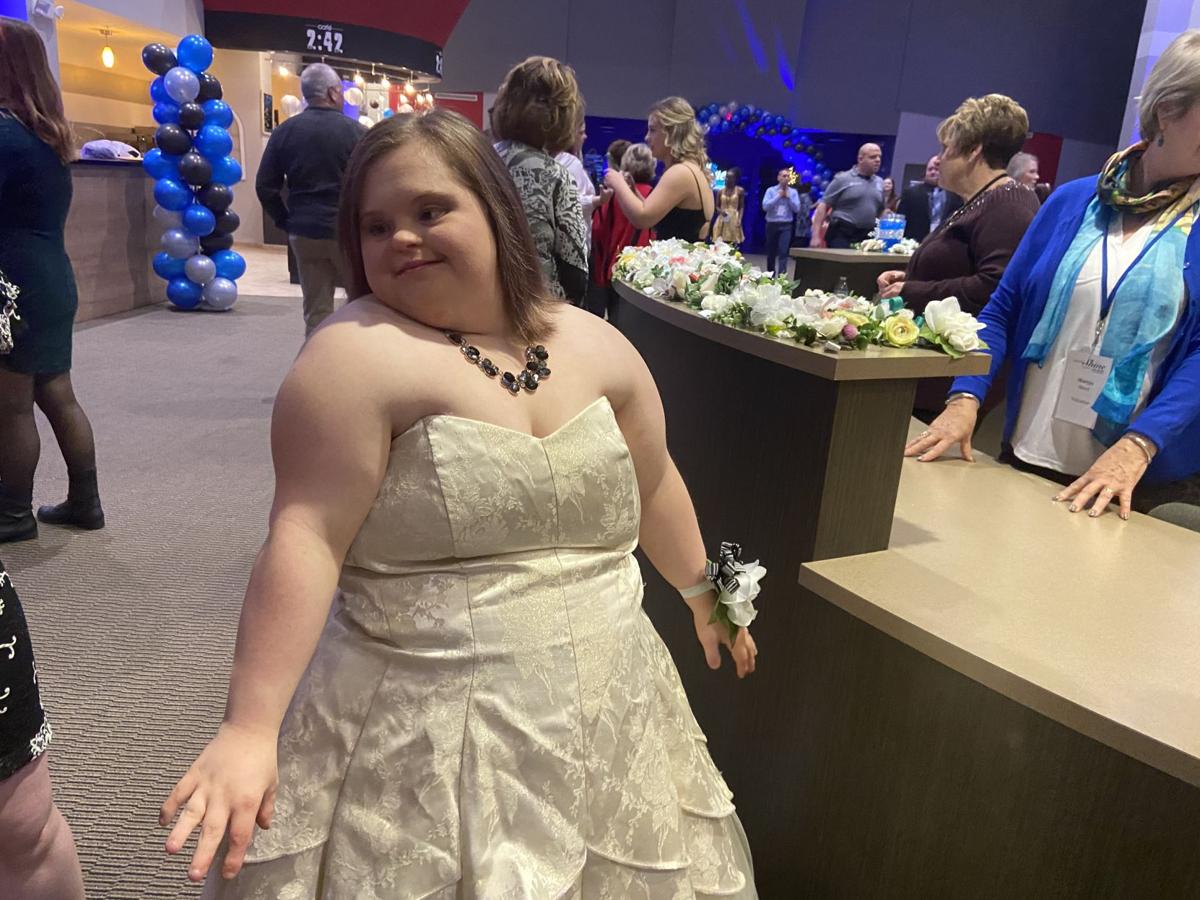 Guest Gabby Campbell shows off her dress and corsage at Friday’s Night to Shine at Eastside Christian Church. The annual event provides a prom night for people with special needs. 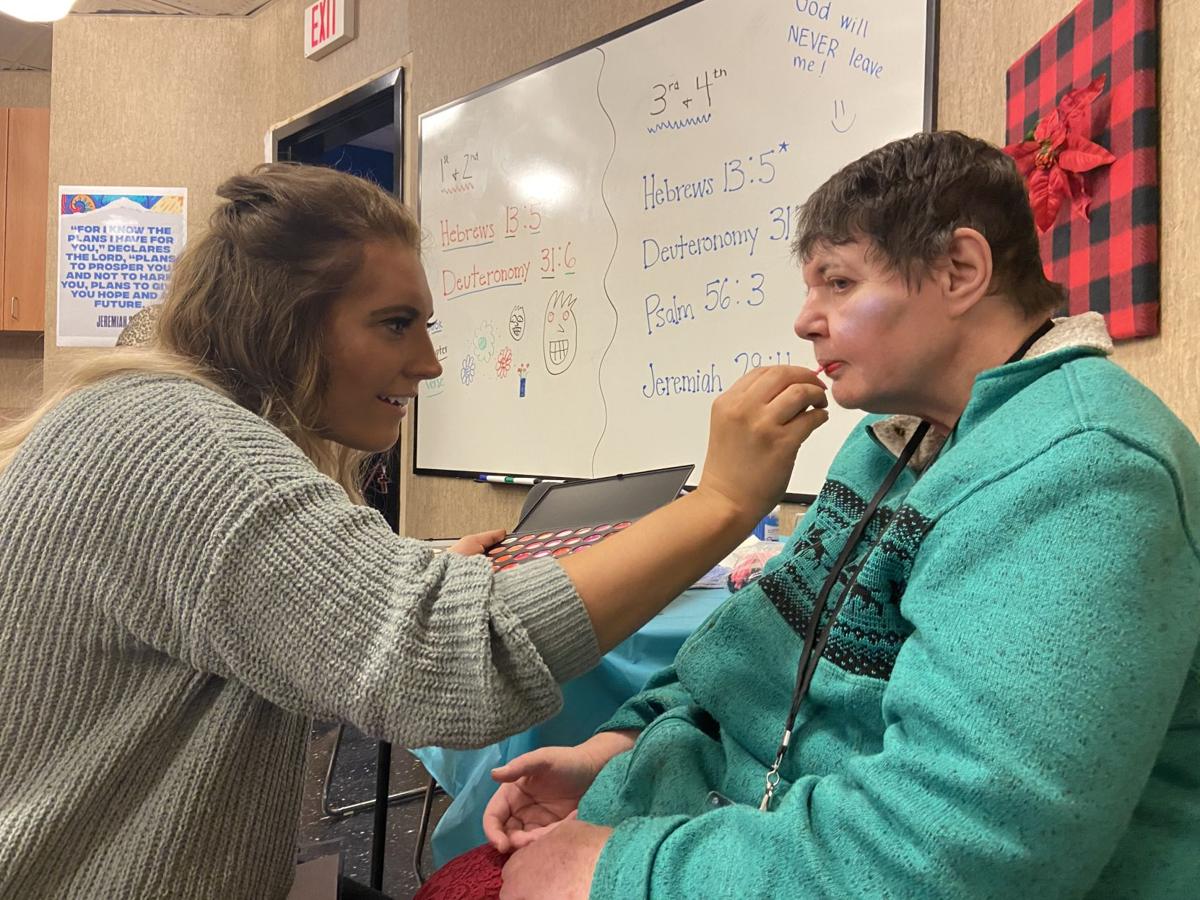 Volunteer Mandy Clark applies red lipstick to guest Deborah Ann Seymour before she took part in Night to Shine on Friday. People with special needs are the guests of honor at the annual prom. 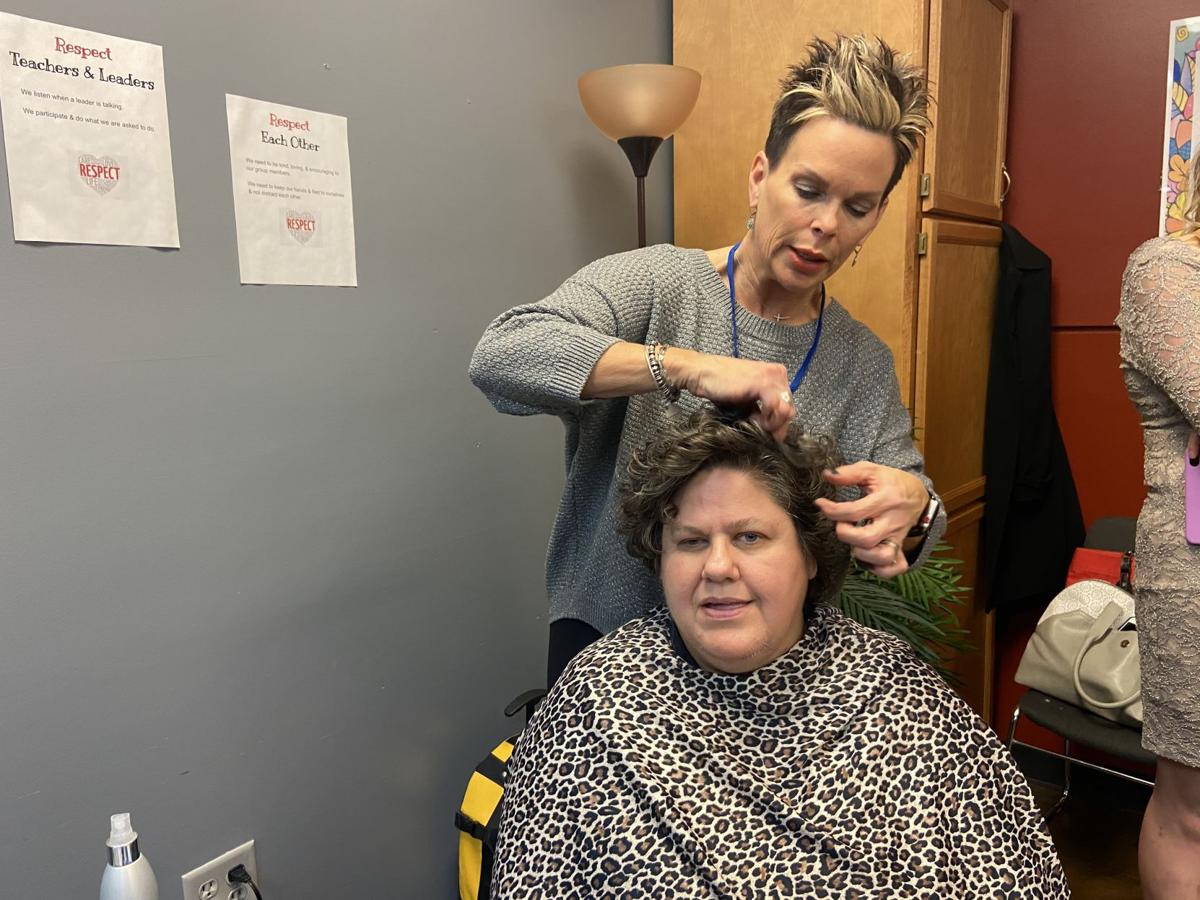 Guest Gabby Campbell shows off her dress and corsage at Friday’s Night to Shine at Eastside Christian Church. The annual event provides a prom night for people with special needs.

Volunteer Mandy Clark applies red lipstick to guest Deborah Ann Seymour before she took part in Night to Shine on Friday. People with special needs are the guests of honor at the annual prom.

JEFFERSONVILLE — Friday was a special occasion for Gabby Campbell as she dressed up in a fancy gown and walked the red carpet for her prom night.

As she arrived at the party as one of the guests of honor, she was excited to enjoy an “awesome” evening with her buddy, Maddie, who she described as her “royal bestie.”

Campbell was among the guests at Eastside Christian Church’s Night to Shine, an annual prom night experience for people with special needs in the community. Special needs guests ages 14 or older were paired with “buddies” who accompanied them throughout the evening. Eastside in Jeffersonville was one of hundreds of other churches participating in Night to Shine, which is sponsored by the Tim Tebow Foundation.

There were about a thousand people at Eastside’s Night to Shine event, including volunteers, buddies and guests, according to Vicki Hood, the church’s women/volunteers pastor. The guests were cheered by a crowd of “paparazzi” as they arrive and walked the red carpet with their buddies. Volunteers did their hair and makeup, shined their shoes and offered them corsages and boutonnieres, and from there, they proceeded to a fun-filled evening with food, dancing, limousine rides and karaoke.

At the end of the evening, all guests were given a crown and pronounced “king” or “queen” of the prom. Tim Tebow launched the event in 2015 to celebrate those with special needs, and according to the foundation’s website, 721 churches across all 50 states and in 34 countries participated this year.

It is a “great, big night of love” for the guests, Hood said.

“It means everything to our church to do Night to Shine,” she said. “We just want to love people who sometimes are forgotten.”

Hood said her favorite part of Night to Shine is seeing the smiles on the guests’ faces as they walk the red carpet. She also is happy to celebrate the guests’ caregivers, who are given special treatment at the event in a space where they can rest for a while, receive a massage and eat dinner. There is also a quiet room for guests who want a calmer prom experience.

For guest Donnie Cook Friday was his second Night to Shine, and he was excited to hit the dance floor and perform a “rap battle” with his girlfriend, Grace. They both enjoy dancing with Down Syndrome of Louisville’s “Boogie Down Crew,” and he showed off his dance moves at the prom night with the “Cha-Cha Slide.”

“We’re looking forward to having a blast with [Beth and Meghan],” Taylor said. “Honestly, we haven’t had a prom experience since high school, so this is as fun for us as it is for them.”

Guests Chase Hawkins and Trish Landreth came to the prom night as a couple. Landreth has attended Night to Shine twice, but it was Hawkins’ first time. She enjoys “everything” about the prom, she said, and Friday was particularly special.

“It’s fun, especially when you have a boyfriend,” she said.

Volunteer Sara Nicholson worked at the makeup station at Night to Shine in her first year volunteering for the event. She liked seeing the guests’ reactions after finishing their makeovers.

“I like it afterwards, when they are done all up and you tell them how pretty they look and compliment the eyeshadow that they picked out,” she said. “That means a lot to me, seeing how excited they are.”

Night to Shine is a significant event for her family. Her sister-in-law has special needs and typically attends Night to Shine every year, but couldn’t attend this year due to illness.

“As someone who has a special needs family member, it’s always been really important that she feels loved on, that she feels included,” Nicholson said. “She just thinks she goes to prom, and that’s the coolest thing ever. I think as a community, this is one of those moments where we all get together and love on people who maybe don’t always get loved on as much, so it’s really morale building.”