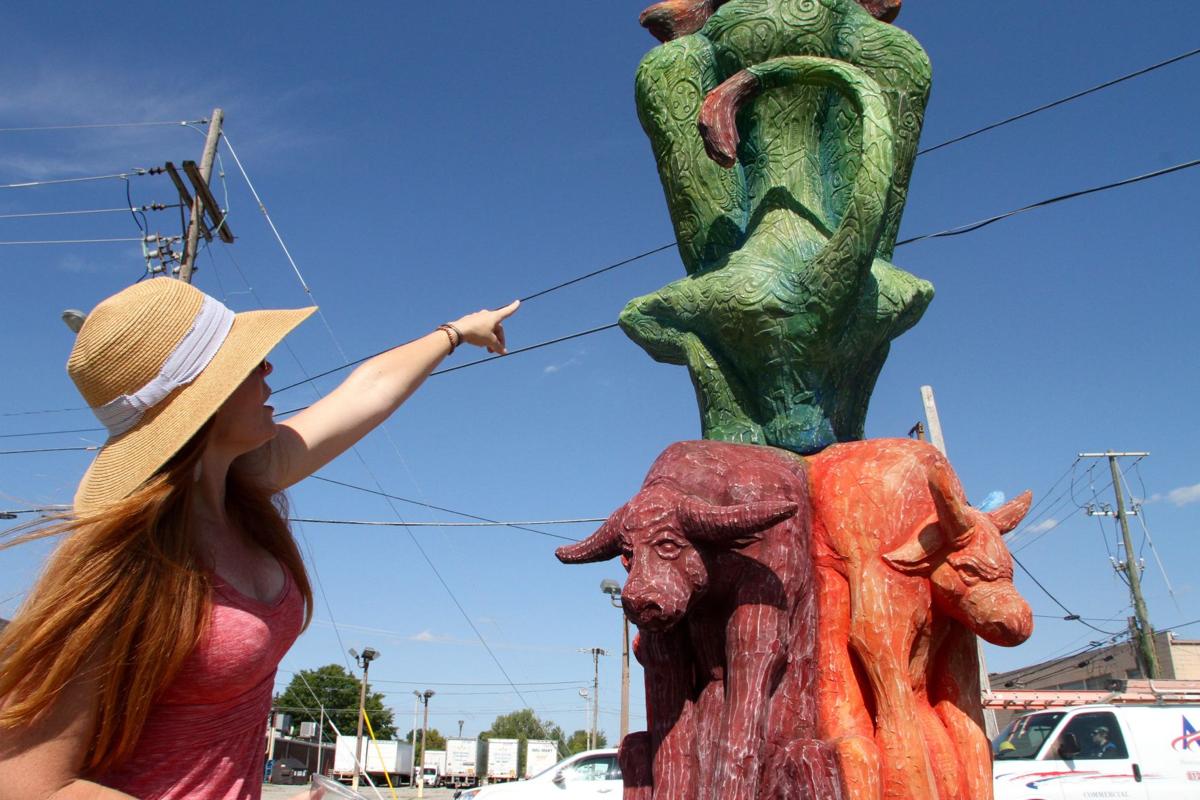 Dawn Spyker points out the intricacies of design on the Aesop's Fables statue that now sits in the NoCo Arts District. 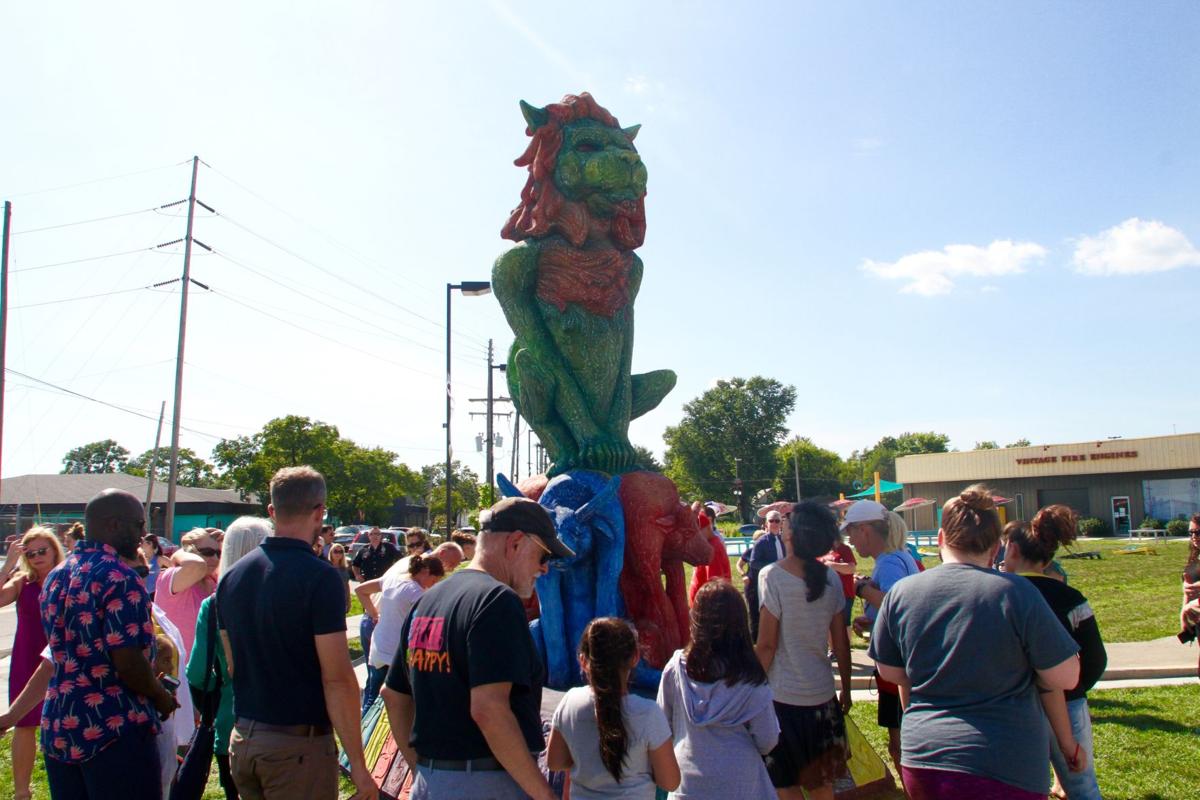 Residents of Jeffersonville gather around the newest addition to the NoCo Arts District. 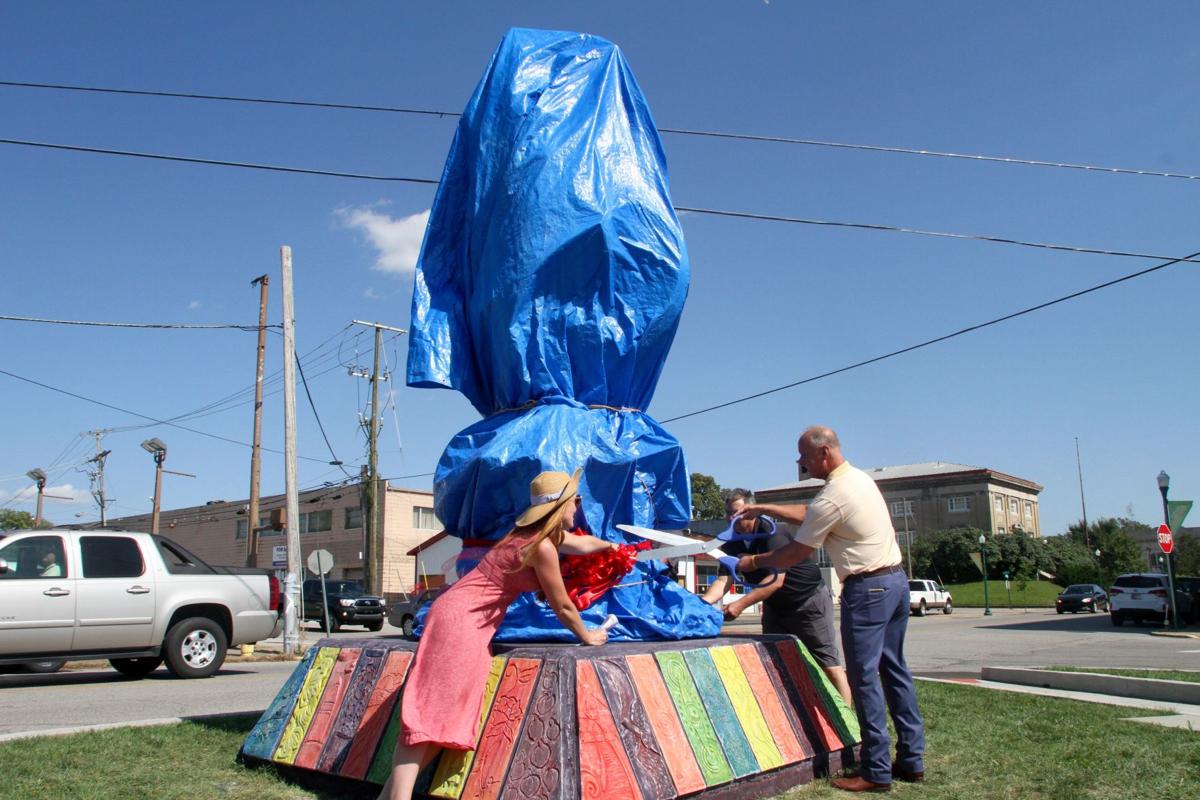 Dawn Spyker points out the intricacies of design on the Aesop's Fables statue that now sits in the NoCo Arts District.

Residents of Jeffersonville gather around the newest addition to the NoCo Arts District.

JEFFERSONVILLE — City officials gathered in the NoCo Arts and Cultural District to unveil the latest addition to the colorful corner of the city.

Where Kentucky Avenue converges with Seventh and Spring streets in downtown Jeffersonville is now the home of a new sculpture based on one of Aesop's Fables — "The Lion and the Four Oxen."

"The fable goes that there's four oxen, and this lion wants to eat them," artist Brian Somerville said. "Every time he tries to, he just meets up with their horns. They stay tail to tail. One day they get in a fight and go to opposite ends of the pasture. The lion's able to walk around and eat them one by one. It's really a lesson in sticking together and how everybody is stronger as a team than we are individually."

Somerville said he spent about four weeks doing the project, driving up from his home in Nashville, Tenn., for sessions of metalwork, concrete, sculpting and staining.

"I've spent a lot of time with this one, so it's nice to see it finished and have people enjoy it," he said.

During that time, Jeffersonville Public Arts Administrator Dawn Spyker was working with local students on the theme of fables and morals.

"We also had a variety of workshops throughout the summer with kids from Greater Clark schools," Spyker said. "We paired up with their lunch and learn program. They were able to come down and watch Brian while they were eating lunch. We had workshops here in the evenings to learn about fables. A lot of kids don't know much about them, so we talked about who Aesop was and what fables are."

Spyker said the community got involved in other ways as well. Some members of the community contributed to the piece by carving symbols of the city's neighborhoods into the base of the sculpture and the lion itself.

The final product is something Spyker was in awe over.

"We love the color," Spyker said. "It's an unexpected pop of color. You don't expect the lion to be green, but we like that it's a little unpredictable. We love the fact that all the iconography of our area is etched and carved into the body of the lion and into the tiles. It's just a nice addition. We needed a gateway piece."

The sculpture serves as more than public art, though. According to city engineer Andy Crouch, it is the final piece to improvements to that intersection. In the past, Crouch said, the intersection has been exceptionally dangerous.

"We had been looking at this intersection for a while," Crouch said. "We had seen a lot of near misses and had some accidents here. We've been talking about doing something for a few years."

Time passed with no plan pursued, until a drawing of this iteration came along. With the art came bike lanes and improved sidewalks and crosswalks.

"I'm amazed," Crouch said. "I think it's a great welcoming piece to our NoCo Arts and Cultural District."