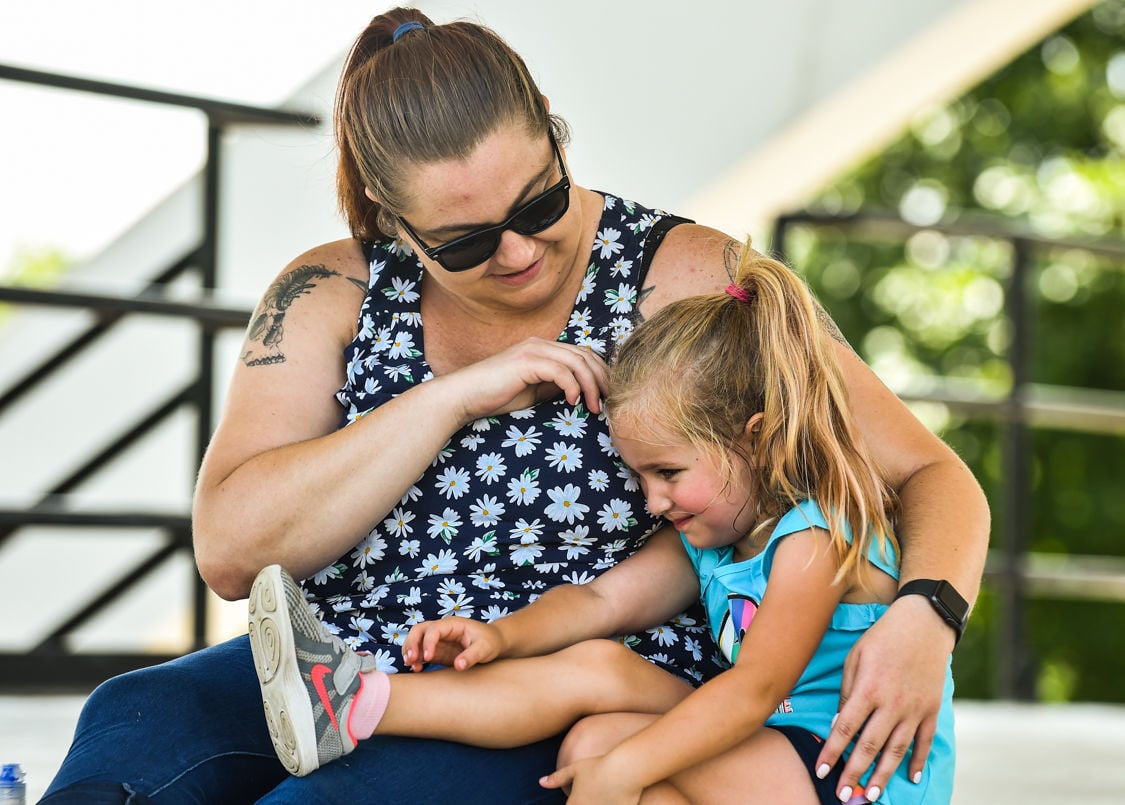 Angel Hill and daughter, 5-year-old Marleigh, have enrolled in the On My Way Pre-K program, which provides coverage from the state to provide educational childcare in the area. Hill, a student at Indiana University Southeast, utilizes the school's daycare program as she works to complete her education. 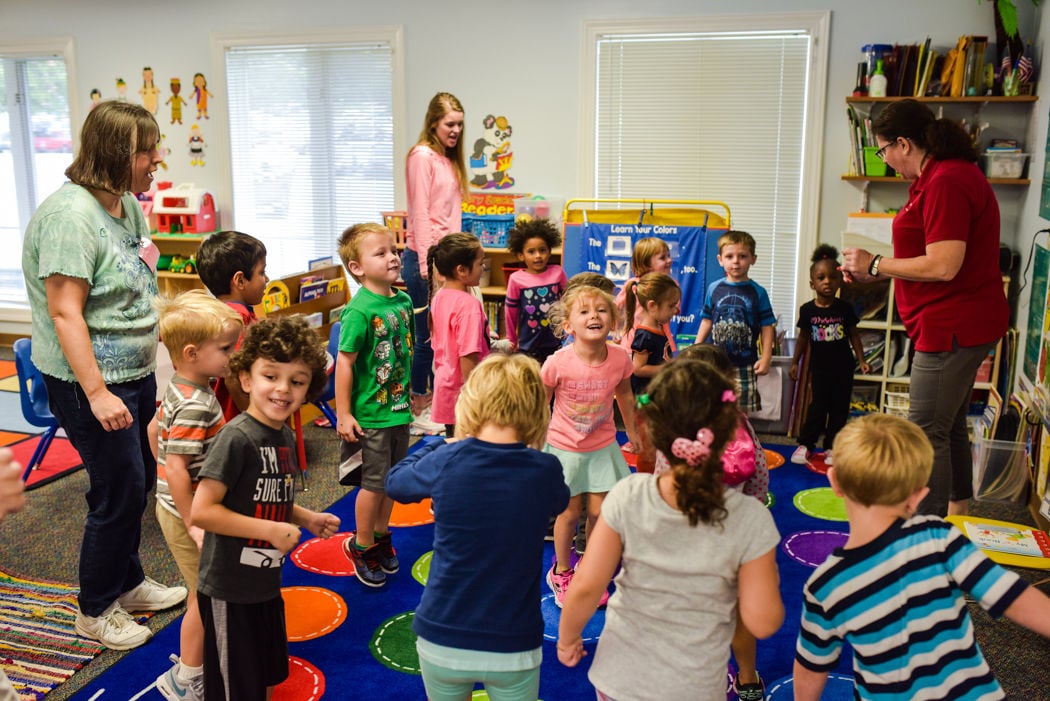 Preschoolers wiggle their “wigglies” out during an exercise at the Indiana University Southeast Children’s Learning Center in New Albany.

Angel Hill and daughter, 5-year-old Marleigh, have enrolled in the On My Way Pre-K program, which provides coverage from the state to provide educational childcare in the area. Hill, a student at Indiana University Southeast, utilizes the school's daycare program as she works to complete her education.

Preschoolers wiggle their “wigglies” out during an exercise at the Indiana University Southeast Children’s Learning Center in New Albany.

SOUTHERN INDIANA — When New Albany resident Angel Hill first started college at Indiana University Southeast a few years ago, it could be stressful managing daycare expenses and her schedule as a single mom.

But after receiving the On My Way Pre-K grant last year, she is now able save money and enroll in additional hours at school as she pursues a degree in health information management. Meanwhile, her 5-year-old daughter Marleigh stays nearby as she attends IU Southeast’s on-campus Children’s Learning Center.

Hill is one of the local parents who has benefited from On My Way Pre-K, a state-funded preschool grant that has seen significant expansions throughout Indiana this year. The grant has been available in Floyd County since 2017 as a pilot program, but following a recent change in state law, the program was expanded to all 92 counties in Indiana, including Clark County. The program awards grants for low-income families with kids who will be 4 years old by Aug. 1.

Grant applications are open throughout Indiana on a continuous basis, according to Erica Woodward, project manager for On My Way Pre-K.

The program is still in the early stages in Clark County, and preschools are still going through the application process to become part of On My Way Pre-K, but applications are currently available for Clark County residents.

In addition to the statewide expansions, On My Way Pre-K is also growing in Floyd County, according to Woodward. This year, the grant will be available through the New Albany-Floyd County Consolidated School Corp. at its Children’s Academy-Early Learning Center. If families do not qualify for the grant, they could still be eligible for a discounted rate at the preschool.

There are currently about 20 available preschool programs within Floyd County, and two more preschool classrooms will be added within the school district next year, she said. In addition to state funding, Floyd County receives partial funding from Metro United Way.

To learn more about On My Way Pre-K, visit www.in.gov/fssa/carefinder, or click here.

Before Hill enrolled in On My Way Pre-K, she was paying about $40 a week with discounted childcare rates from River Valley Resources. It might not seem like a lot, she said, but for a single mom who was focusing on her full-time college education, those costs added up. When Hill started college, Marleigh was attending a daycare in Charlestown, and they switched to the IU Southeast preschool, where she eventually learned about the grant.

Up until December, Hill was also working full-time at Jeffersonville Pediatrics, and it helped to have a preschool where her daughter could stay throughout the day. Her daughter has been happier since starting school at the Children’s Learning Center — the teachers focus more on hands-on learning, she said, and the teachers care about the students. Marleigh is currently in preschool as her mother takes summer classes, and she will soon start kindergarten.

It has it has been helpful not having to worry about the weekly or monthly expenses associated with childcare, Hill said.

“A lot of families, sometimes they don’t have the money to go out to eat one night or take their kids to a pool — just little things,” she said “And that makes a tremendous difference on what I can do for her or what I can do with her. If there’s something that she needs ... I don’t have to weigh the options. I know that I can do it or not do it. If I can’t, it’s not because I’m having to pay for the daycare expense.”

On My Way Pre-K isn’t just about providing childcare for families, Woodward said. High-quality education is also a key component, and preschool programs must be a Level 3 or Level 4 in Indiana’s Paths to Quality rating system to qualify for the grant program. Woodward emphasizes that attending a high-quality pre-k program prepare children for kindergarten both academically and socially.

Woodward often hears about how families save money through the grant, including ones who are able to provide better meals for their families. The grant is available year-round, including in the summer, so families can essentially pay nothing for one year of pre-k and childcare, she said.

She encourages parents to apply for the On My Way Pre-K grants as soon as possible if they want to enroll their kid in a particular program, since preschool classrooms are filling up.

“If there’s a certain provider you want for your child, you need to go ahead and apply, because On My Way Pre-K is based on parent choice, and that is a big part of of On My Way Pre-K,” she said. “With the grant, we don’t tell you which program to send your child to or which school. Every parent has different needs and wants for their child, so we want to ensure that those needs and wants are met for each family.”

It is also important for parents to understand that the process of enrolling in On My Way Pre-K doesn’t stop once their application is approved, according to Woodward. The online application only takes about five minutes, she said, and families are informed immediately whether they have been approved for the grant. If they are approved, they will receive a packet in the mail with instructions for an appointment, which is necessary to attend in order receive the grant.

She describes On My Way Pre-K as a “two generational” approach that helps the child and the family. She said the preschool funding provides many benefits for people like Hill, since it allows them to expand their hours of work and/or education, and they can earn their degrees faster than they might be able to otherwise.