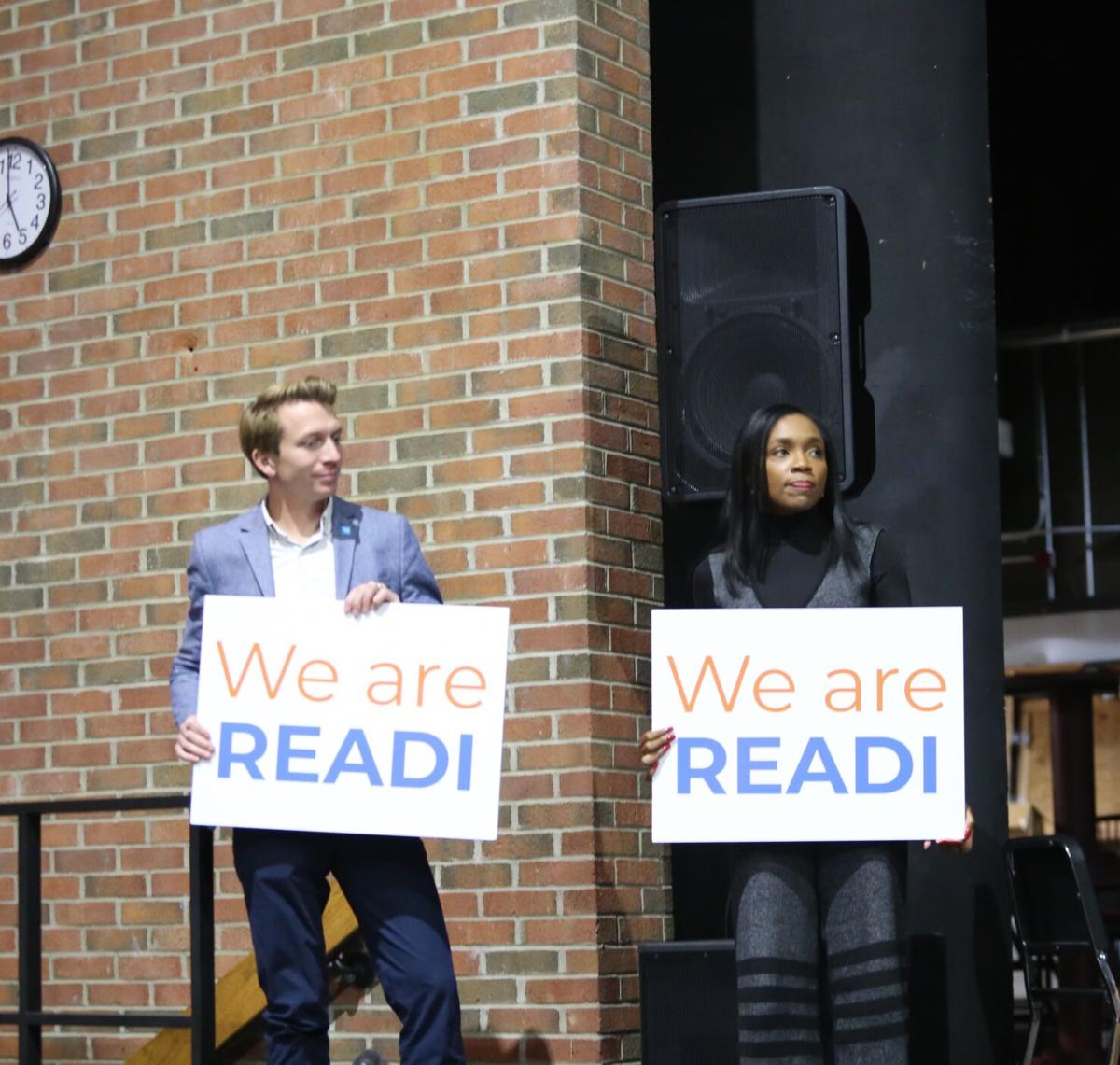 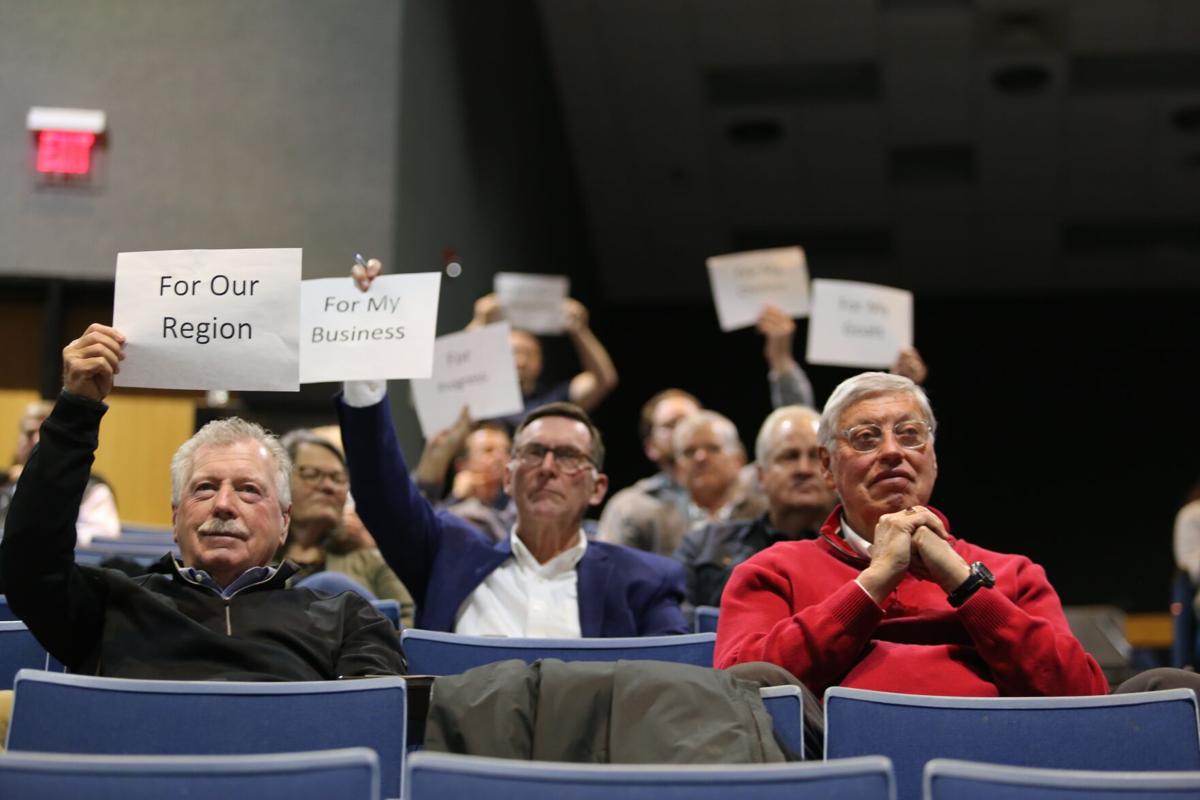 Attendees participate Monday in a presentation rehearsal by Our Southern Indiana Regional Development Authority. The RDA is hoping to receive up to $50 million in READI funding from the state. 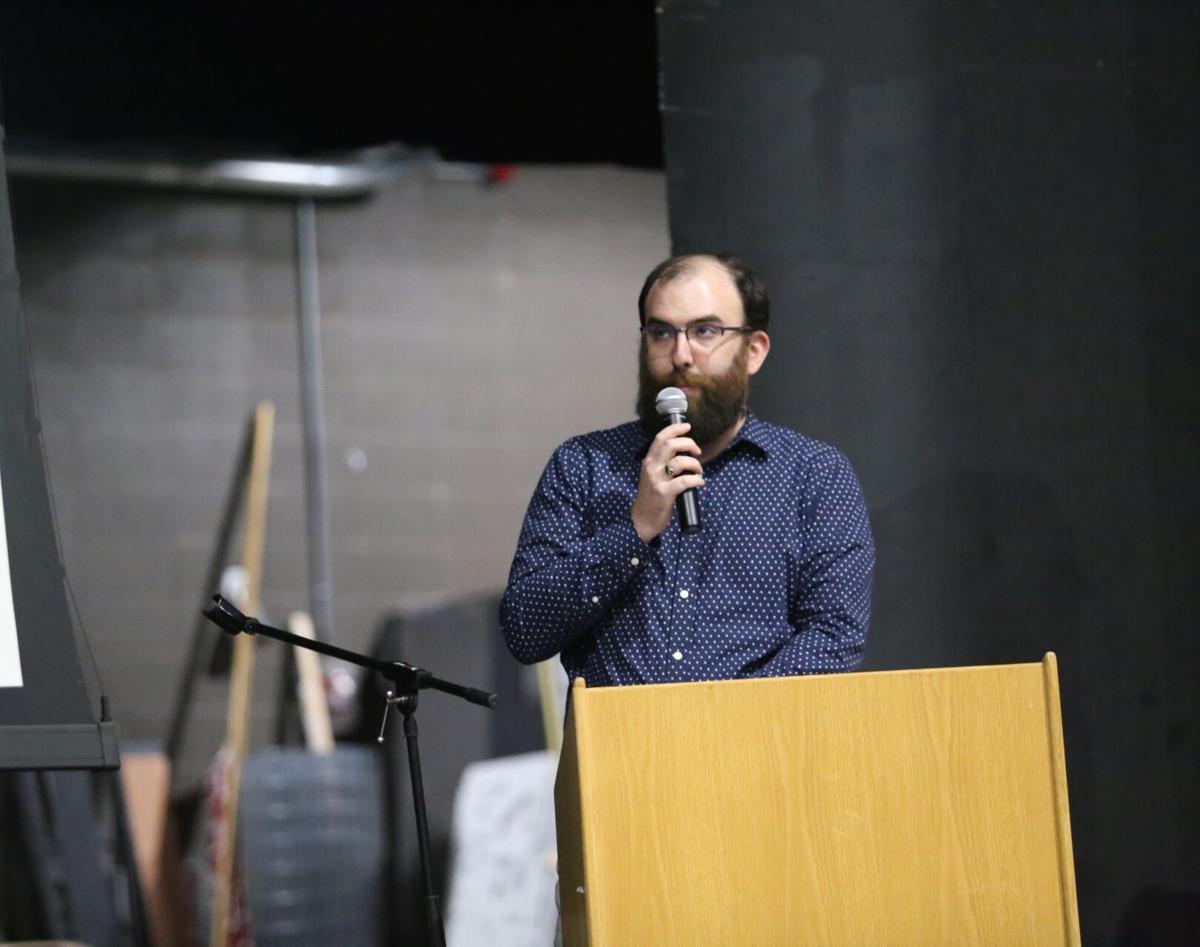 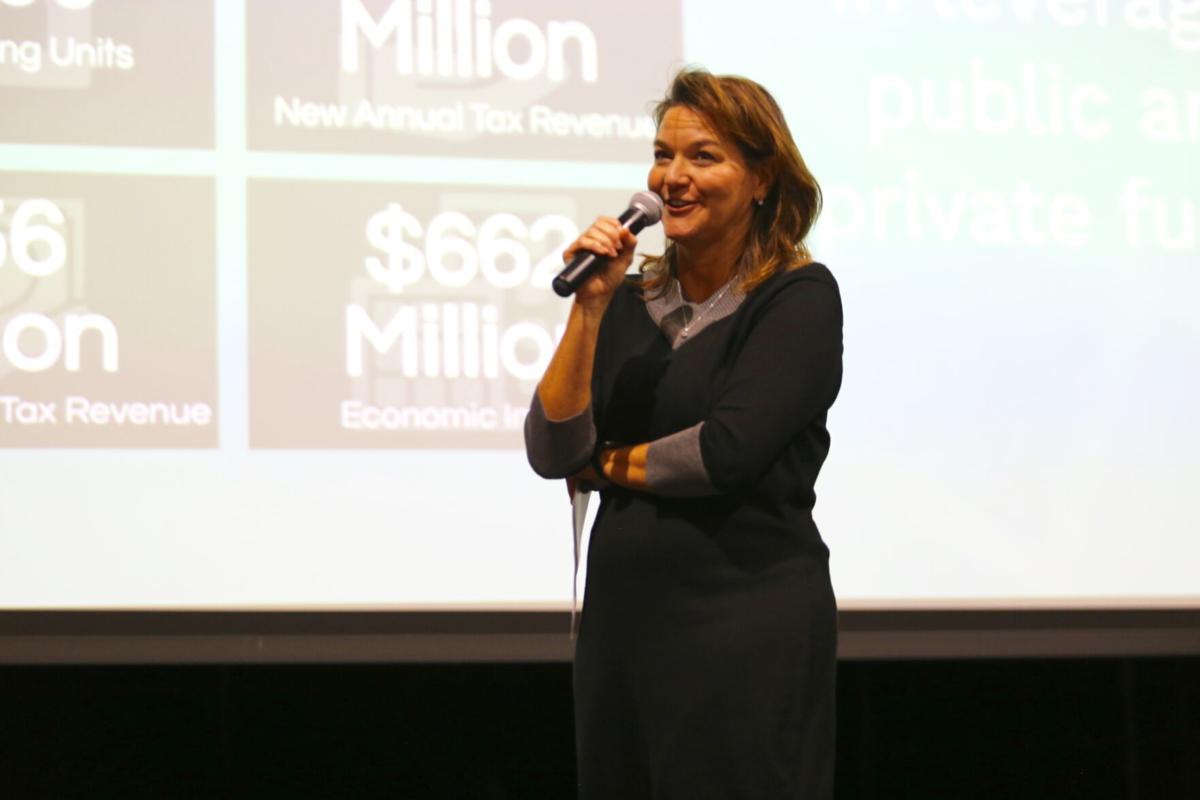 Wendy Dant Chesser of One Southern Indiana speaks Monday at an event focused on preparing for a presentation to request funding for regional projects from the state.

Attendees participate Monday in a presentation rehearsal by Our Southern Indiana Regional Development Authority. The RDA is hoping to receive up to $50 million in READI funding from the state.

Wendy Dant Chesser of One Southern Indiana speaks Monday at an event focused on preparing for a presentation to request funding for regional projects from the state.

SOUTHERN INDIANA — Southern Indiana government entities and local organizations are preparing to make their case for a grant of up to $50 million that would go toward projects ranging from infrastructure improvements to workforce development.

Our Southern Indiana RDA presented a “dress rehearsal” Monday at Charlestown High School to prepare for the presentation to IEDC, which will take place Friday, Dec. 3 at the Dallara Indy Car Factory in Speedway on the west side of Indianapolis.

The RDA has created a plan covering projects in Clark, Floyd, Scott, Jefferson and Washington counties that could be funded with a READI grant. The plan encompasses 18 projects across the region that will yield $1 billion in public and private investments.

Wendy Dant Chesser, president and CEO of One Southern Indiana, is part of the executive team for Our Southern Indiana RDA. She said “it has been a passion to champion regional thinking throughout our five counties.”

The state’s READI program will provide a total of $500 million to regions across the state for projects to support economic growth in Indiana.

Local stakeholders presented proposals for each of these areas, and the presentation included videos to showcase what the READI funding would support.

Chesser noted that Our Southern Indiana originally expected 60 to 90 minutes to present the plan, but instead, the RDA had to condense the presentation into a half hour.

As a result, not all of the projects will be discussed at the official presentation, but they are still part of the submission to IDEC, Chesser said. Videos not included in the half-hour presentation will be provided via flash drives to the committee reviewing the proposals.

Our Southern Indiana is one of 17 regions competing for READI funding, Chesser said.

Although up to $50 million could be awarded to the region through the READI grant, Our Southern Indiana’s plan requests $85 million, since the region could find other avenues for funding projects.

“The state said don’t limit it to $50 million, since there are other resources they could help identify,” Chesser said. “We definitely listened to their word on that.”

Dana Huber, vice president of marketing and public relations at Huber’s Orchard & Winery, is also the chair of Our Southern Indiana. She emphasized the work the RDA has put forward since it was formed in 2017 and presented its first public meeting in 2018.

“Many local partners are committed to our region and our plan, and our submission represents over seven years of work toward regionalism in Southern Indiana,” she said. “Our journey to this point has not been easy, but it has been meaningful.”

She said she hopes to prove that an “investment in Our Southern Indiana’s region is truly an investment in Indiana.” The RDA’s proposal focused on “transformational projects.”

Madison Hamman managing director of Blue Sky Capital and strategic investment at Samtec, Inc., presented the “natural assets” piece of the proposal. He is the co-chair of River Heritage Conservancy, the nonprofit leading the development of Origin Park, one of the projects in the region’s READI plan and the focus of the presentation.

Hamman said the projects proposed in the plan will activate the region’s natural resources, and it is “thoughtfully designed and programmed to Southern Indiana’s incredible but overlooked assets,” which will be “made accessible to all.”

In the video included in the presentation, River Heritage Conservancy Executive Director Scott Martin describes the planned 600-acre park along the Ohio River as “America’s next great urban park.”

Martin describes the history and ecology of the site, as well as the plans to make a climate-resilient park that is designed to be enjoyed even during flooding of the Ohio River. The presentation focuses on the park’s role in providing a place of nature in the midst of an urban setting.

Madison Mayor Bob Courtney presented the destinations piece, and a video focused on enhancements to quality of place in Madison, which is one of the projects included in the READI proposal.

“With help from the READI funds, we will build great destinations throughout Southern Indiana by enhancing our downtown, small town quality of life, expanding regional entertainment offerings and promoting unique visitor experiences,” he said.

“With $1.3 million of us in the Greater Louisville area, our single most regional asset is our population of workers,” she said. “And they need skills to survive and thrive in the economy of the future.”

The video for the workforce and entrepreneurism piece outlines a couple of the projects included in the READI plan. One was the future Family Scholar House campus in Sellersburg, which will support educational opportunities for low-income families, including single mothers who were not able to focus on education while working to support their family.

A collaboration between Hanover College and Ivy Tech Madison to establish the Veterinary Teaching Center in Madison was another focus. The program aims to bring more trained veterinary professionals to Indiana.

Devin Hillsdon-Smith, deputy director of River Ridge Development Authority, presented the infrastructure and connections and gateways categories of the proposal.

He highlighted the economic impact of the growing River Ridge Commerce Center in Clark County, and he described projects to improve infrastructure and increase connections to the commerce center within Southern Indiana.

Infrastructure “is not the sexiest of topics, but we also know they are so incredibly critical,” he said. One of the projects in the plan is improving wastewater treatment facilities in Charlestown and Jeffersonville to support future growth.

Developing an access road from Sellersburg to River Ridge and completing the River Ridge Learning Center are also among the goals.

Rich Boling, vice president of Techshot in Greenville, focused on Floyd County’s Novaparke Innovation & Technology Campus for the economic development and housing sites piece of the proposal. The park is being developed along Indiana 64.

The Novaparke video focused on the future technology park’s role in bringing high-skill, high-wage jobs and attracting residents. It highlighted features such as the collaboration with the Indiana University Southeast School of Business, the availability of business incubator space and the effects to the surrounding area.

“If we are going to build an economy of the future, we need to ensure we have sites that transform into community anchors by forming economic growth hubs,” Boling said. “We know the importance of creating a nurturing environment for entrepreneurs and that these sites will become beacons for high-wage jobs, and we need livability within our future and existing neighborhoods so this talent can put down roots as Hoosiers.”