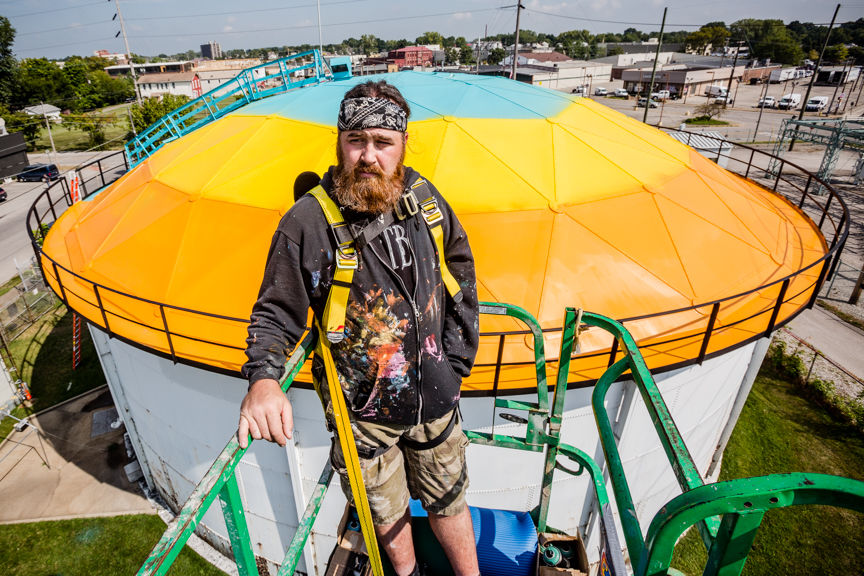 Muralist Wilfred Sieg III stands in front of his next large-scale canvas, the water tower on Michigan Ave. in Jeffersonville. 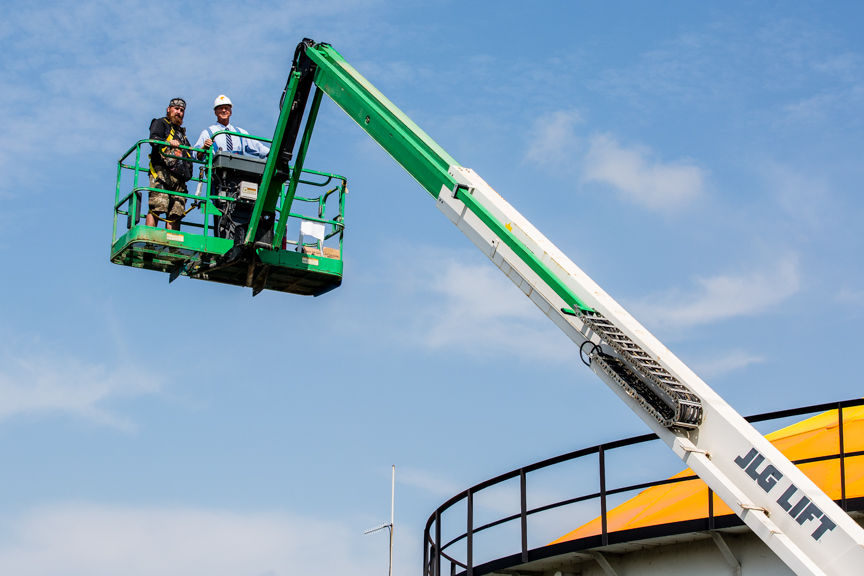 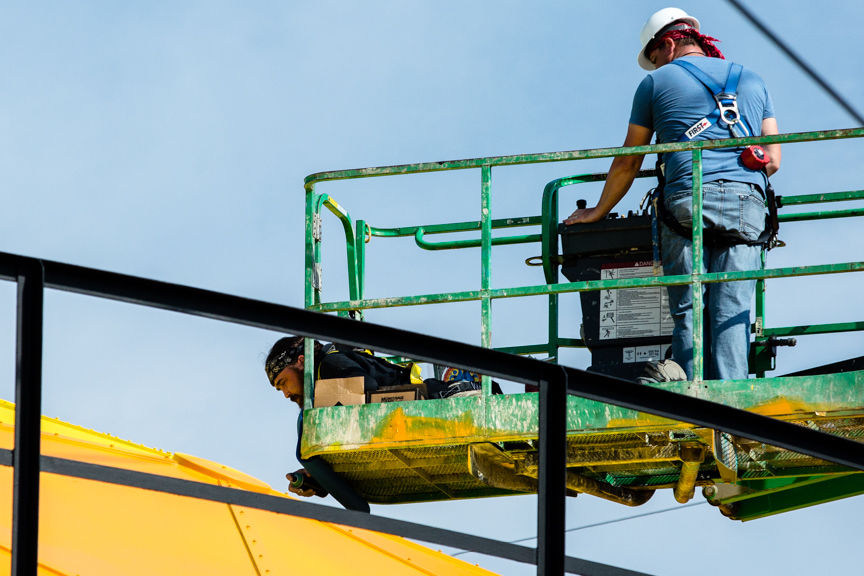 Wilfred Sieg III hangs over the water tower in a the basket of a lift, sketching his design with spray paint.

Muralist Wilfred Sieg III stands in front of his next large-scale canvas, the water tower on Michigan Ave. in Jeffersonville.

Wilfred Sieg III hangs over the water tower in a the basket of a lift, sketching his design with spray paint.

JEFFERSONVILLE — Downtown Jeffersonville is getting a big splash of color, as work on the water tower in the heart of the new arts and cultural district begins.

Local artist Wilfred Sieg III, the artist commissioned to paint the tower, started work on the domed top of the tank Wednesday after prime work was done last week by Primary Colors, Inc. The entire project is expected to be completed by late October, weather permitting.

For Jeffersonville, this signifies the first big physical marker of progress toward the new arts and cultural district, between Court Avenue and Spring Street. The tank will serve as a marker for the district, which feature galleries, shops, and a wide array of creative spaces.

“To me, this is progress,” Jeffersonville Public Arts Administrator Dawn Spyker said. “It becomes real.”

The city was given permission to paint the tank by Indiana-American Water, which still controls it. But in about a year, the water company has plans to drain the tank and gift it to the city, which will open up new opportunities for use in the budding arts district.

Whether it becomes a music studio, theater or other creative space is yet to be known, Spyker said. Through a series of community gatherings, she and others are working with residents to find out just what they want their district to look like.

The first meeting several months ago outlined the potential projects in store for the growing neighborhood. A second meeting, originally scheduled for September, is now going to be held in November to get public input on the tank's usage after its new face is done.

“That second meeting is going to be all about programming,” Spyker said. “Do we want music? Do we want theater?

“We need people with creative minds to say 'We need literacy down here but what does that look like?' Do we have poetry slams, open mic things? Art is not just painting, it's not just a sculpture [and] I think we have a lot of cool input to give as a community.”

Jeffersonville Mayor Mike Moore got a bird's-eye view of the top of the tank Wednesday by way of a lift Sieg uses to paint.

“Who would have thought a water tower could be so cool and neat?” he said. “Then Dawn Spyker enters the picture and all of a sudden we've got a new big piece of art, we've got an artist that's renowned well beyond the boundaries of Indiana and Kentucky taking pride in a project.

"I'm just really excited about it — but this is just the beginning. There's so much more to come. Come back here in two years, you're not going to believe the difference you're going to see.”