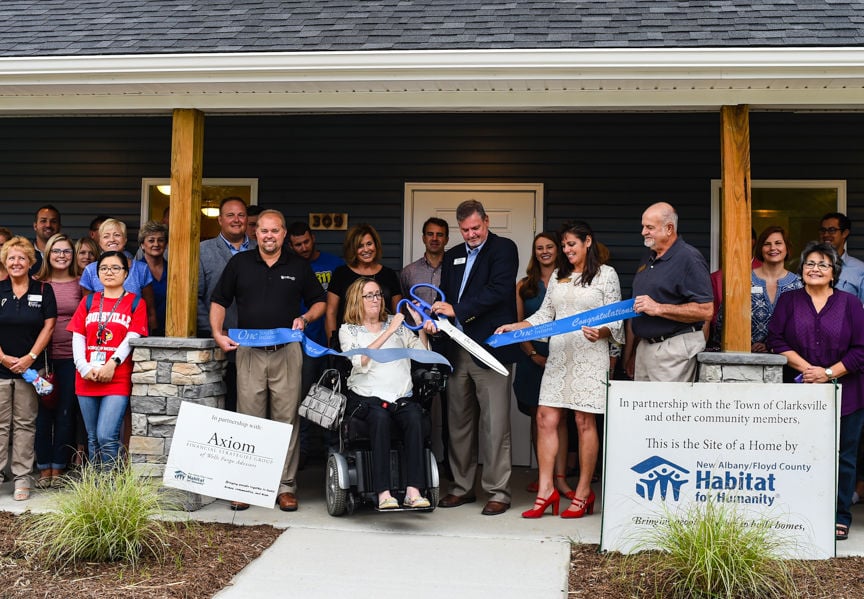 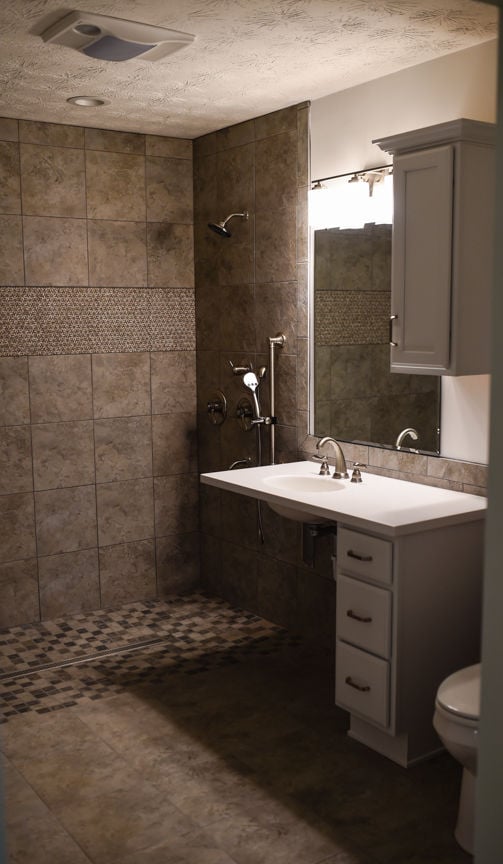 The home also features a master bathroom with a walk-in shower and vanity counter that provides added space below the sink for the wheelchair. 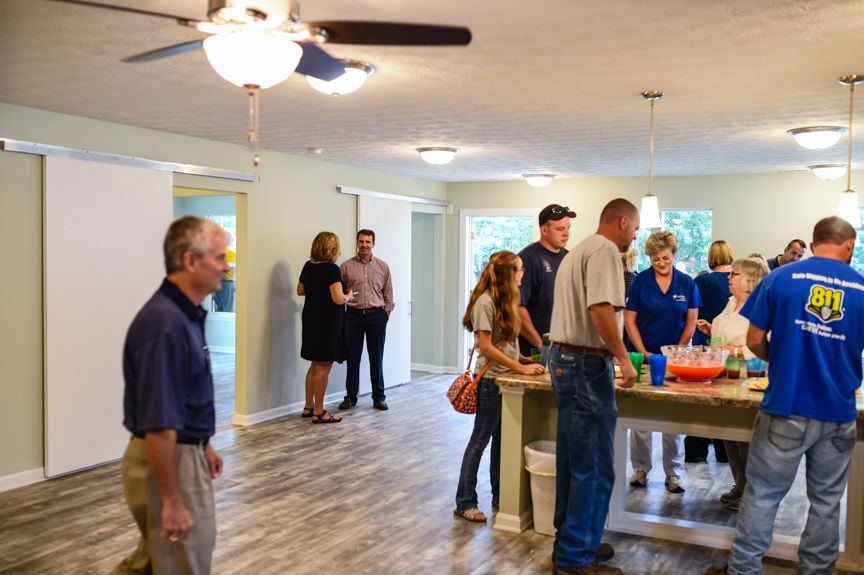 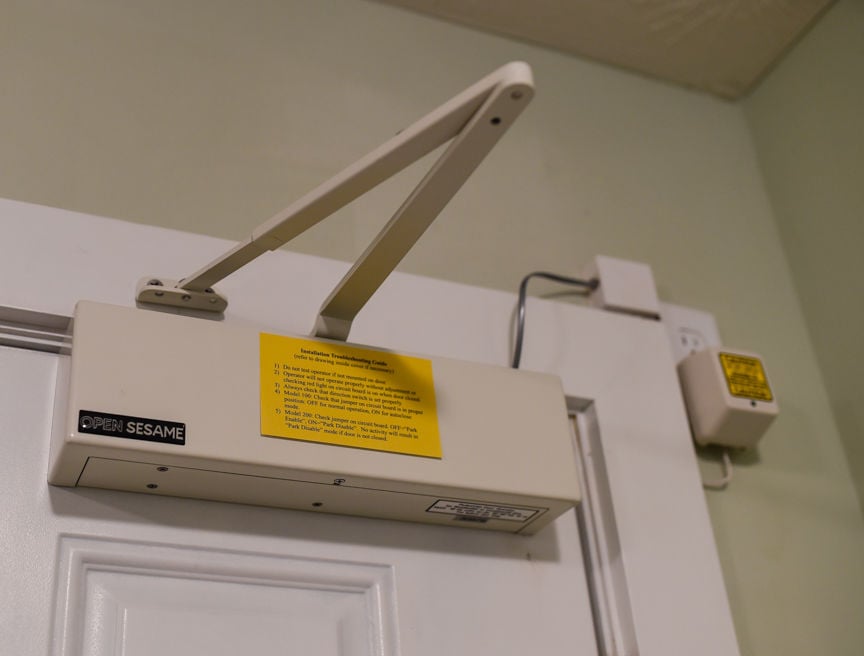 The home features automated doors in the front and back of the house to provide better mobility while entering and leaving the home in her wheelchair. 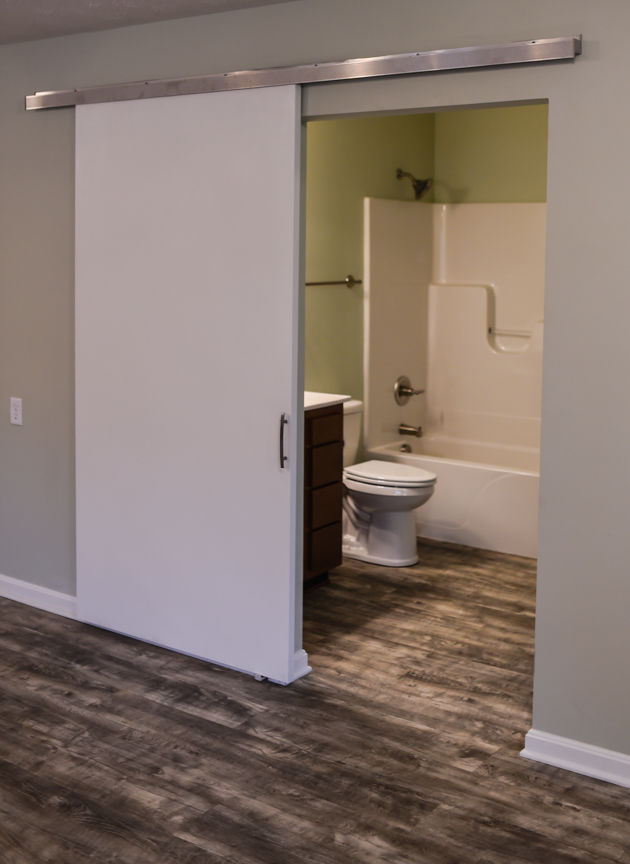 Each doorway is equipped with gliding doors to improve access and ease of opening and closing to each room from her wheelchair. 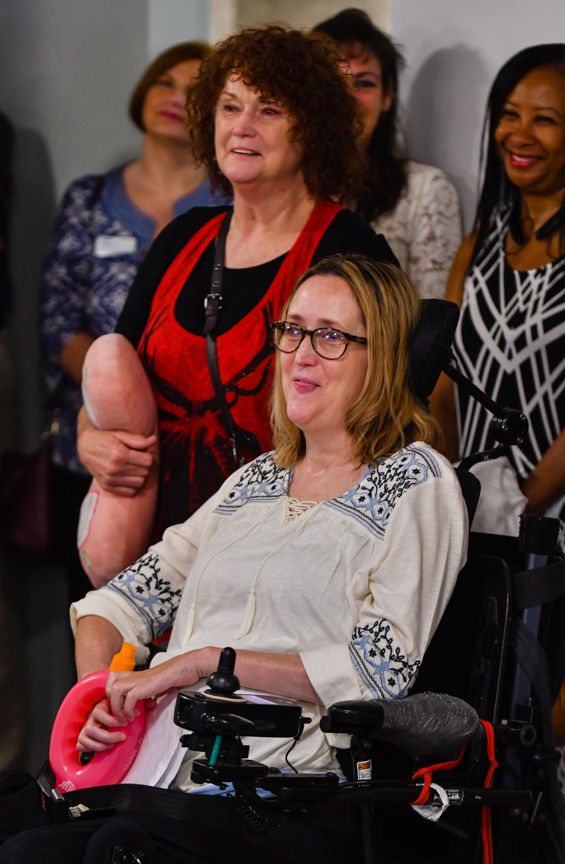 Tess Kessinger reacts as Jerry Leonard discusses the process of building her new Clarksville home during the dedication ceremony on Friday morning. Kessinger suffered a spinal injury from a car accident in 2006, and has been wheelchair bound since. Kessinger serves as a Research Assistant for the University of Louisville.

The home also features a master bathroom with a walk-in shower and vanity counter that provides added space below the sink for the wheelchair.

The home features automated doors in the front and back of the house to provide better mobility while entering and leaving the home in her wheelchair.

Each doorway is equipped with gliding doors to improve access and ease of opening and closing to each room from her wheelchair.

Tess Kessinger reacts as Jerry Leonard discusses the process of building her new Clarksville home during the dedication ceremony on Friday morning. Kessinger suffered a spinal injury from a car accident in 2006, and has been wheelchair bound since. Kessinger serves as a Research Assistant for the University of Louisville.

CLARKSVILLE — Tess Kessinger is ready. To start listening to her music at full volume. To eat dinner when she chooses. To live on her own again.

Thanks to Habitat for Humanity, that will soon be a possibility. On Friday, the Clark and Floyd affiliate of the national organization unveiled its latest finished home — for Tess. It's the first Americans with Disabilities Act-compliant house built by the local chapter.

While Tess had to put “sweat equity” hours into building her home, it’s still a gift. One of independence. Something she's lacked for too long.

Eleven years ago, Tess was a passenger in a car that left the road and crashed. The accident paralyzed all her limbs at first.

When she got back from the hospital, Tess weighed just 92 pounds, needed a trach tube to breathe, and couldn’t move any part of her body past her arms.

At 35, after 17 years of living on her own, Tessa had become completely dependent upon her parents once again.

“At times, she wasn’t healthy enough to do anything,” said her father, Jerry Kessinger, a Palmyra resident. That included eating. Jerry and his wife helped feed Tess for years.

She was determined not to stay in that condition.

“You have two choices,” Tess said. “It’s either to fight or to lay there. And I was too young just to decide to lay there.”

After years of physical therapy and multiple surgeries, Tess can now move her hands and her arms, albeit with some limitations.

Around four years ago, she took up a new cause: find a way to live on her own. “The last piece of the puzzle for independence,” she said.

It took Tess a year to figure out how to do it.

Having Ownership Means Everything (HOME)

Three years ago, Tess applied to Habitat for Humanity. Due to an influx of families, the local organization wasn’t able to break ground on her home until last year.

As a Habitat for Humanity homeowner, Tess will have to pay for her Clarksville house, albeit on a zero-interest mortgage. Her payments will cost no more than 28 percent of her monthly income.

Tess works part-time conducting research at the Kentucky Spinal Cord Injury Research Center. As a one-person household, she must make at least $15,000 to qualify for a Habitat for Humanity home.

Habitat for Humanity participants also have to help build their homes. That usually means helping with construction, but Tess put in her hours by preparing lunches for workers and calling vendors for donations.

“She’s just on the go: ‘Let’s just do this,’” said Jerry Leonard, the executive director of Habitat for Humanity Clark and Floyd County. “Nothing seems to stop her.”

Tess has had some help from the community along the way. Jeremy Ward, the owner of Coronado Stone in Jeffersonville, donated the land, on which once stood a house that burned. The City of Clarksville demolished the rest of the home. Other businesses: Axiom Financial Strategies Group, Duke Energy, Vector Marketing and First Savings Bank also contributed to the effort. All in all, around 500 people had a hand in building Tess’ home, Leonard said — knocking $15,000 to $20,000 off the final cost.

“…The community really was putting their arms around it,” he said. “Just because it was a little bit different, it made it special.”

Tess' home accommodates for her needs. The back door uses an automatic opener for easy access, a carport in the back will shelter Tess as she enters and exits cars, electrical outlets sit at chair height, and the home is slightly more spacious for easy wheelchair turning.

Tess was at the forefront of the decision-making process for the home: testing out her chair in the house and consulting with her peers on how their homes were laid out.

He has started the process of closing on the home with Tess. They hope to have everything finished in two weeks.

“She’s a little bit nervous about it,” Leonard said. “But she’s going to be one of the best homeowners.”

Tess does have her worries about owning her own home. She frets about falling out of her chair while alone or being forgotten when she needs help getting ready for work. (Attendants provided through an Indiana Medicaid waiver will tend to Tess in the evenings and mornings).

But living on her own is more of a necessity for Tess than a wish, says to her father.

“I’m getting ready to turn 71,” Kessinger said. “My wife’s not young, either. [Tess is] going to have to live by herself. I mean, anything can happen to us at any time, and then she has nobody. So this is a feast or famine situation. She has to do it.”

He has faith in her, though.

“She’s been a strong-willed kid all her life,” he said. “You can’t tell her that she can’t do nothing because she’ll do it.”

That's reflected in her attitude toward living on her own.