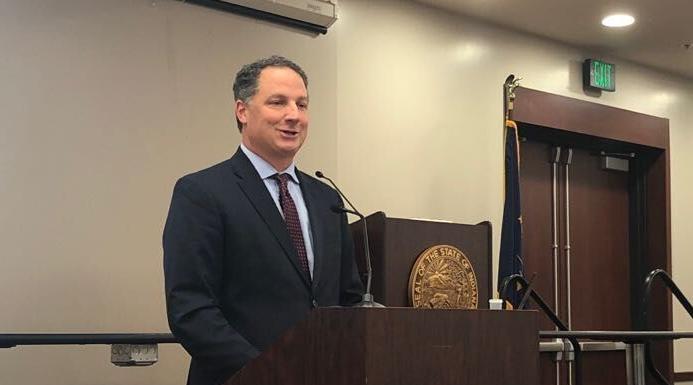 House Speaker Todd Huston, R-Fishers, addresses media in Indianapolis on Thursday during the first week of the 2021 legislative session. 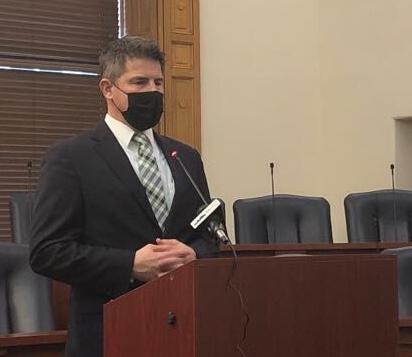 Sen. Pro Tem Rodric Bray, R-Martinsville, addresses media in Indianapolis on Thursday. Bray and his fellow Republicans have set their priorities for the legislative session, which started last week.

House Speaker Todd Huston, R-Fishers, addresses media in Indianapolis on Thursday during the first week of the 2021 legislative session.

Sen. Pro Tem Rodric Bray, R-Martinsville, addresses media in Indianapolis on Thursday. Bray and his fellow Republicans have set their priorities for the legislative session, which started last week.

INDIANAPOLIS — During the opening days last week of an unusual session, Republicans and Democrats of the General Assembly released their priorities for 2021, many inspired by inequalities and shortcomings exposed by COVID-19.

“We keep falling farther and farther behind our neighboring states in compensation paid (to) teachers,” GiaQuinta said, citing a December report that found a $600 million state shortage in teacher pay. “It’s high time we put down some money.”

Huston said he would prioritize “strategic, one-time investments” for schools that fund extra learning programs for students whose education suffered disproportionately because of the pandemic.

Huston and other Republicans contacted families, he said, and found that they wanted more learning options for their children. Lawmakers responded by expanding school choice in HB 1005.

“We think that it’s important that … as many families as possible have these choices to get their students in the best possible place,” Huston said.

GiaQuinta disagreed with the Republican emphasis on expanding Indiana’s school voucher program, already one of the most expensive voucher programs in the country.

“It’s really about priorities,” he said. “I would rather invest in our public school educators and our students.”

Huston expressed optimism that school funding could be increased but remained committed to a balanced budget.

“I believe, appropriately, decisions regarding teacher pay and compensation should be made at the local level,” he said. “We (don’t) take a heavy-handed approach.”

“(Teachers) can frankly go make more money doing other things,” he said. “It’s sad because they will tell you that their first love and priority — what they wanted to do — (was) become a teacher, but they just can’t afford to do it anymore.”

Both sides collaborated over the summer to file HB 1006, aimed at holding Indiana’s police forces accountable for transgressions and enacting criminal justice reform.

The bill’s authors include Gregory Steuerwald, R-Avon; Wendy McNamara, R-Evansville; Steve Bartels, R-Eckerty; and Robin Shackleford, D-Indianapolis. It would require Indiana’s law enforcement training board to include de-escalation in its curriculum and would prohibit chokehold use in certain circumstances.

The bill also would establish a procedure for the law enforcement training board to decertify officers who commit misconduct, would make turning off a body camera with intent to conceal a misdemeanor and would make record sharing between police departments to identify “bad actors” easier.

These potential changes come after a restless summer of protests sparked by several instances where police killed unarmed Black men and women, spiking after the deaths of George Floyd in Minneapolis and Breonna Taylor in Louisville.

More details will emerge when the bill is heard in the Courts and Criminal Code Committee, scheduled for Tuesday.

State Sen. Eddie Melton, D-Gary, and the other 13 members of the caucus filed additional bills in both chambers that would ban the use of chokeholds and no-knock warrants.

“We appreciate the conversation (with the governor) but I think we’re moving past conversation. I think Hoosiers want to see action and they want to see policy on these issues,” Melton said, speaking as assistant minority leader for the Democrats.

The Black caucus will push hard for raising the minimum wage from $7.25 per hour, especially since many employed in low-wage jobs are considered “essential” workers at higher risk of contracting the virus.

“A worker making ($7.25) would have to work 73 hours per week to afford a one-bedroom apartment or even childcare. That does not include other expenses such as gas, groceries (or) transportation,” Melton said.

“A single adult working a full-time, minimum wage job would fall beneath the poverty line if they had even one dependent.”

Numbers from the Living Wage Calculator, a project from MIT, confirm Melton’s statistics.

Melton’s proposal would increase the minimum wage to $10 by January 2022 and by $1 each year thereafter until it reaches $15 in 2027, which he said would give businesses time to recover from COVID-19’s economic fallout.

The bill would also rescind a law that prohibits cities from setting their own minimum wage.

Otherwise, Melton said, Indiana could lose these workers to neighboring states, such as Illinois ($11) and Michigan ($9.65), with higher minimum wages.

“When we look at the timeliness in terms of the pandemic and the individuals who actually provided the work and services, we need to make sure that they can provide for their families,” Melton said.

“While it is definitely a struggle for all of us, (the pandemic) has unveiled the disparities in public policy decisions that we’ve made over the years and how it’s going to affect us going forward,” Sen. Minority Leader Greg Taylor, D-Indianapolis, said.

Taylor criticized Republicans, the party of “small government,” for filing bills limiting local control of Indianapolis, a form of what he called “government overreach,” such as the prohibition on cities setting their own minimum wage.

For example, Senate Bill 168, by former law enforcement officer Jack Sandlin, R-Indianapolis, would take control of the city’s police away from the mayor and make the governor responsible for appointing a board.

Sen. President Pro Tem Rodric Bray, R-Martinsville, said the bill could help law enforcement officers who believe their “supervisors or the administration doesn’t necessarily have their back.”

One quick-moving Republican bill, SB 1, had a committee hearing in the first week. It would provide businesses with protection from COVID-19 lawsuits.

Bray and other Senate Republicans also want to examine limiting the role and power of local health officers, who acted as the first line of defense against the deadly spread of COVID-19 in many communities.

“I think (the pandemic) has brought to light that some of those decision-makers aren’t accountable or subject to … the constituents,” Bray said.

The examination of powers to order quarantines or the wearing of masks will go all the way to Gov. Eric Holcomb himself.

“I want to make sure that everybody understands that this is not a critique of this government. It is a recognition that suddenly the emergencies that we deal with might … last more than just a number of days,” Bray said.

“Then it is probably appropriate to have the General Assembly come in and weigh in on some of the policies and emergency orders.”

Lawmakers in leadership positions resisted calls from Democrats and Republicans alike to hold a special session over the summer. The 2020 session ended in mid-March just as the pandemic began to grip Indiana.