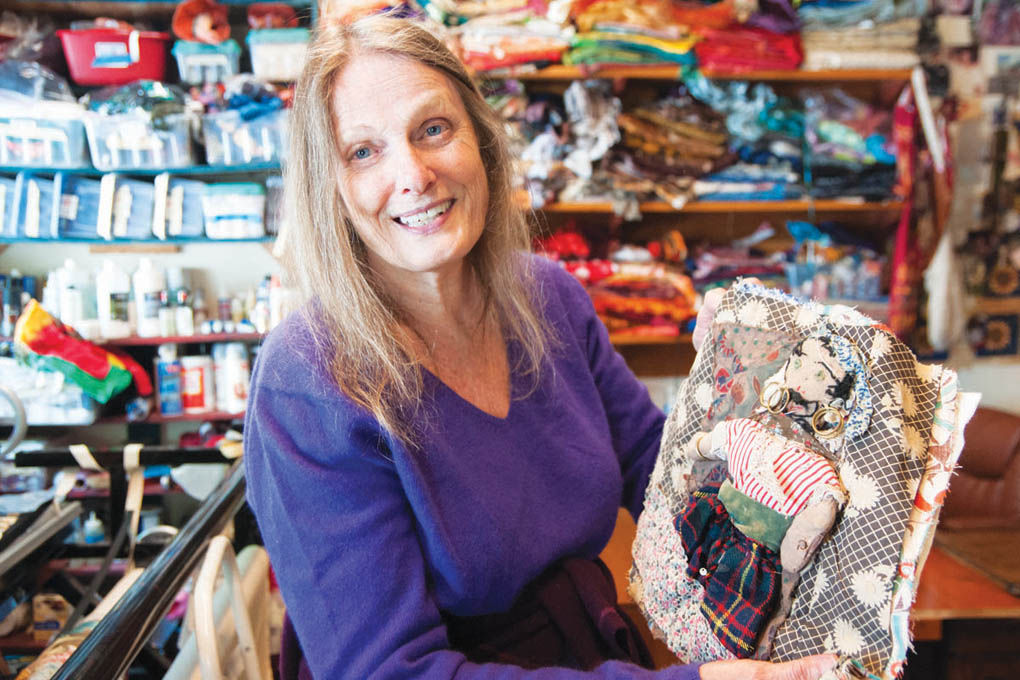 Local artist Penny Sisto showcases her first quilt that she created as a 7-year-old. Sisto’s grandmother taught her how to sew while Sisto grew up in Scotland. 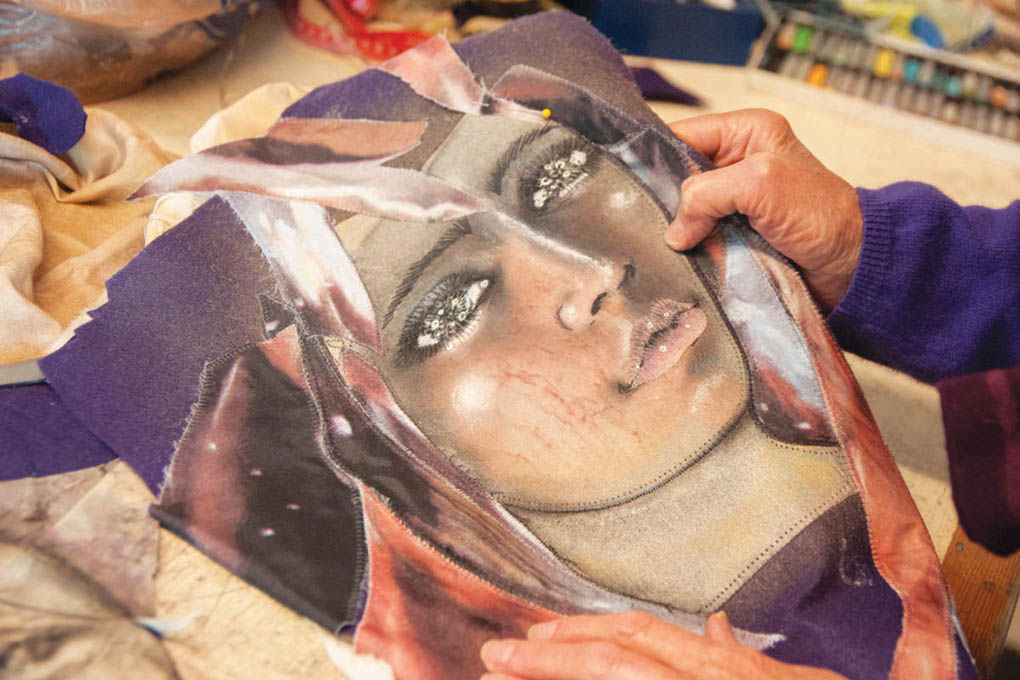 Local artist Penny Sisto fixes pieces of fabric on a sheet of felt during the beginning stages of a new quilt. Sisto often portrays women and mothers in her work, which she attributes to a tough childhood. 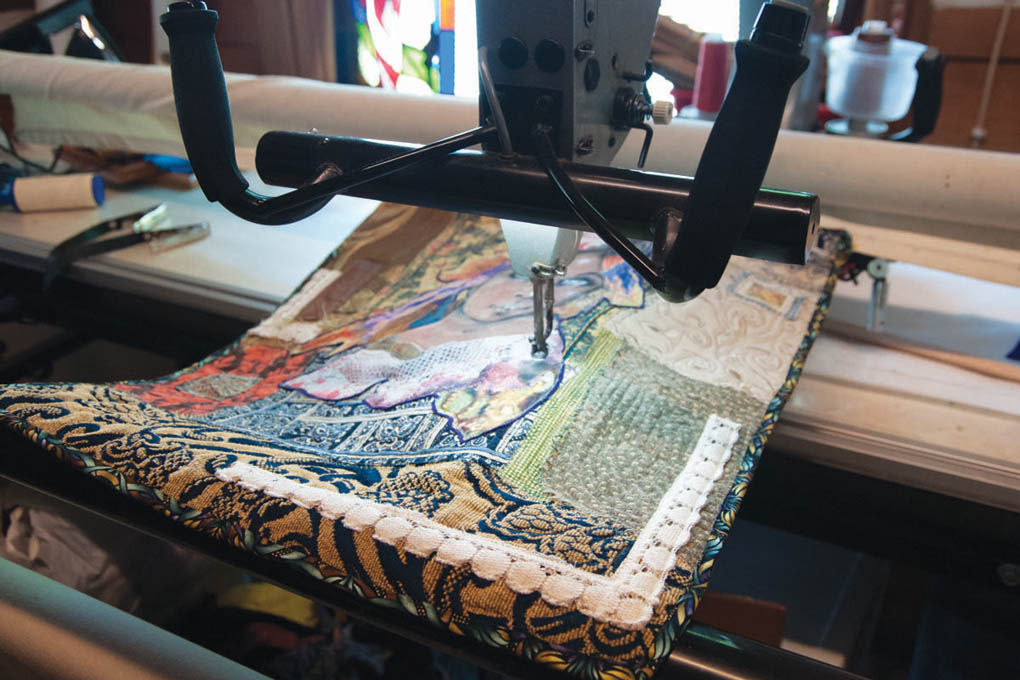 Local artist Penny Sisto places the finishing touches on one of her quilts. Sisto creates “a couple hundred” every year and sells them on her website and at local shows.

Local artist Penny Sisto showcases her first quilt that she created as a 7-year-old. Sisto’s grandmother taught her how to sew while Sisto grew up in Scotland.

Local artist Penny Sisto fixes pieces of fabric on a sheet of felt during the beginning stages of a new quilt. Sisto often portrays women and mothers in her work, which she attributes to a tough childhood.

Local artist Penny Sisto places the finishing touches on one of her quilts. Sisto creates “a couple hundred” every year and sells them on her website and at local shows.

FLOYDS KNOBS — Everything about the 73-year-old Penny Sisto seems a little unreal, maybe unbelievable, or how she described it “magical.”

It might be her home — a log cabin tucked in the woods. Perhaps it’s her soft Scottish accent that rises and falls like the sea near the island in which she grew up. It might even be the way she finds detailed human faces in scraps of felt and dyed cloth taken from — what else — a hideaway she calls a “magic drawer.”

Sisto, an artist since 7 years old and a Floyds Knobs resident, turns out “a couple hundred” pieces every year and sells them to a local audience. Her work, well — “A: It’s beautiful,” said the Rev. Rick Kautz of St. Paul’s Episcopal Church in New Albany. “It’s just wonderful work.”

His church has hosted Sisto’s work a few times in the past two years.

The working name for Sisto’s art is “quilt,” but her creations are a combination of pastels, dye and cloth. The finished products are realistic masterpieces, often of women, but always alive.

Sisto’s creativity was born of a “grim” early life, where her story seems less like a fantasy novel and more like a Greek tragedy.

“I think because the atmosphere at home was so destructive, I needed to create something beautiful each day,” she said.

Sisto’s family had lived on the Orkney Islands in Northern Scotland for hundreds of years when Sisto’s teenage mother gave birth to her and left the area soon afterward. Sisto’s grandmother raised her, but didn’t have much use for another mouth to feed.

“I loved her very much, but she was a very hard woman,” said Sisto.

Still, Sisto said she learned important lessons from her situation.

“I carry a lot of scars, but I would choose it again because it taught me so many beautiful things,” she said. “The greatest of which was to be totally self-sufficient.”

Being self-sufficient for Sisto means not going hungry or growing lonely. It means holding witness to everyday miracles.

In the early 1960s, Sisto, then a well practiced midwife, traveled to Africa to help Maasai women give birth. From there, she moved to California with her first husband and lived at a “commune” — the still-standing Ananda Village.

“So I came here and stayed even though he didn’t,” she said jokingly.

Sisto has been with her husband Richard Sisto, a jazz musician, for 35 years. They moved to Kentucky and worked on a dairy farm before moving to her current Indiana residence. By that time, only three of Sisto’s 10 children lived at home.

When Sisto arrived in Indiana, her property was nothing, she said. “Nothing, but frogs and trees.”

Today, there are still things to be done — Sisto said she is waiting on rain to lay a stone path — but the majority of her home is completed. A backyard teepee even stretches into the sky. Sisto follows a Native American tradition.

Her teepee has hosted the home births of her grandchildren and a parade of interesting animals — birthing does and stoic owls.

Animals are not the only visitors that find themselves in Sisto’s backyard.

She possesses a picture of Adolfo Perez Esquivel, a Nobel Peace Prize winner, standing on her property.

“He wanted to meet me,” she said proudly.

She doesn’t know exactly how he heard of her — his wife is an artist, she said. Or maybe the monks who lived near her Kentucky farm told him about the woman in the woods.

Whatever it was, people seem to be drawn in by Sisto.

“Penny herself when she gives a gallery talk, the spirit that comes out of her just exudes joy and life,” said Kautz.

Pamela Mattei, a Louisville-based artist who has made a “national name” for herself in fabric arts, has similar things to say about Sisto, who mentored Mattei during her high school years.

As a freshman at Presentation Academy, Mattei watched Sisto speak during a Women in Careers Day event. Mattei’s “eyes lit up like a kid on Christmas morning” when she heard a real fabric artist would be talking. When school ended and Mattei returned home, she told her parents what her future held for her.

“I want to be a fabric artist,” she said.

Now, Mattei owns her own business — DyeSigns by Pamela Inc., but she hasn’t forgotten her beginnings.

“No interview or story about my journey as an artist is complete unless I talk about the impact Penny has had on my career,” she said in an email.

Sisto has her limits of course — at least that’s what she says, but she also acknowledges her abilities.

“I’m a bad artist, I have no education, I’m a bad sewer ... and yet the one talent I have is to put down in fabric something that makes you able to feel how I felt when I made it,” she said. “And that’s magic.”