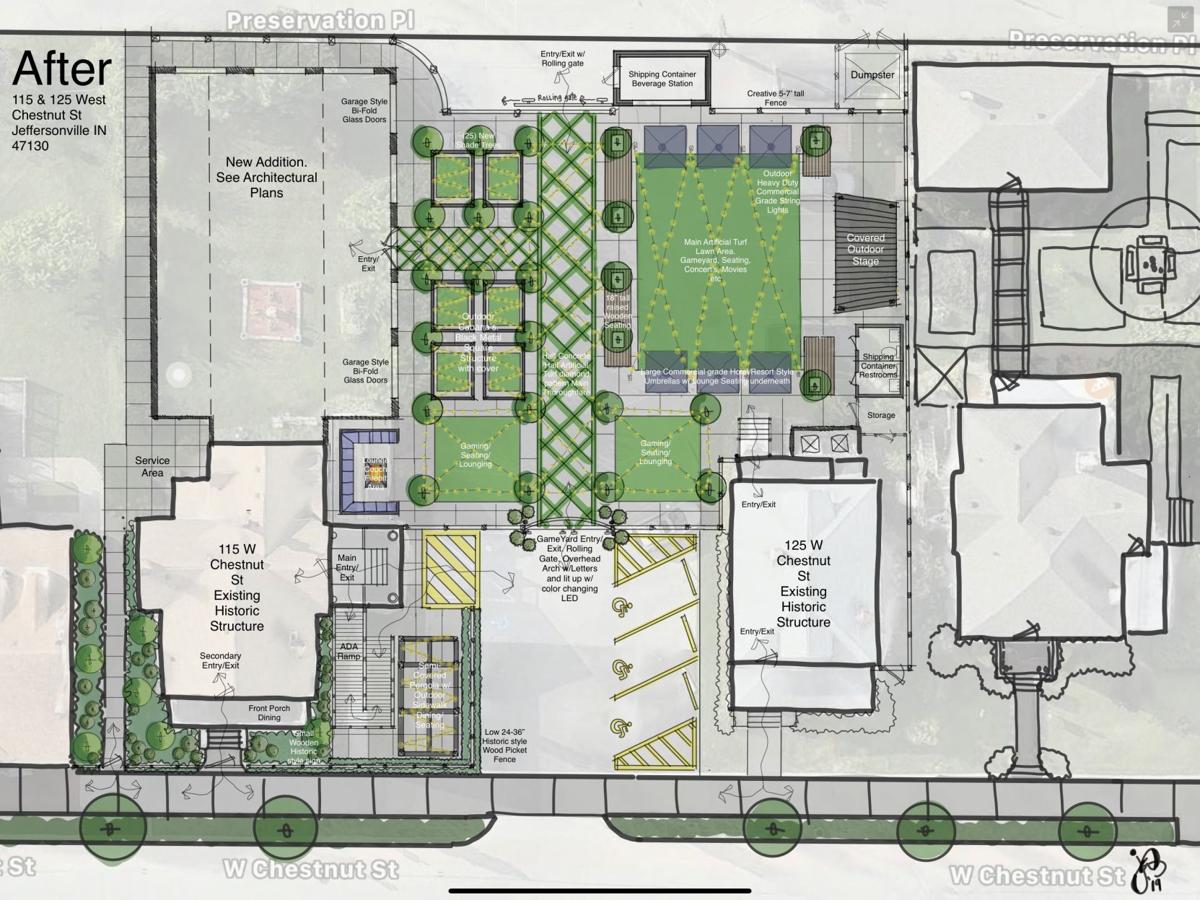 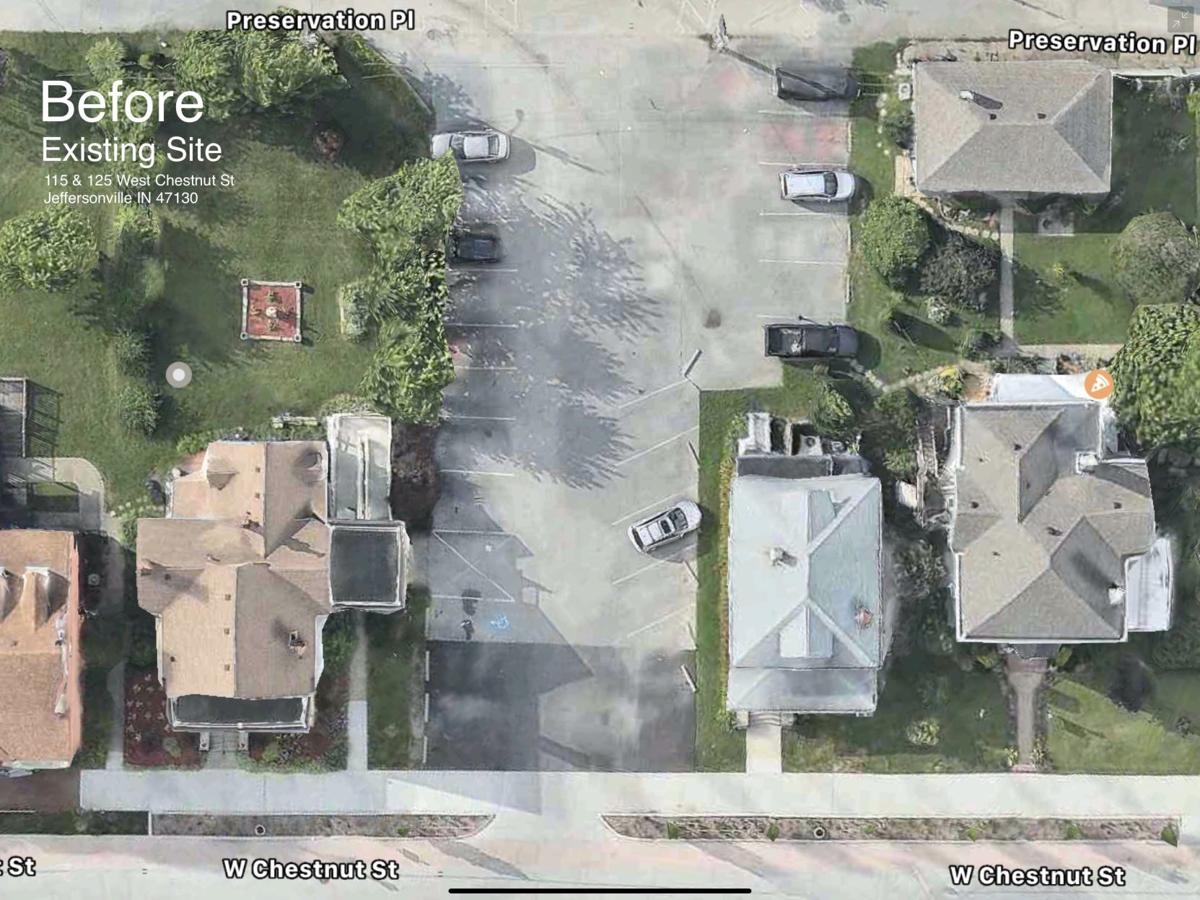 An aerial view shows the current layout of the property near the corner of West Chestnut and Pearl street, where Union Restaurant & GameYard will set up shop next spring.

An aerial view shows the current layout of the property near the corner of West Chestnut and Pearl street, where Union Restaurant & GameYard will set up shop next spring.

JEFFERSONVILLE — The vision for a new downtown entertainment venue is becoming more clear now that the proprietors have released their plans.

At Tuesday's Jeffersonville Board of Zoning Appeals and Plan Commission meeting, developers Steve Resch and Chad Sprigler revealed plans for a project that will sit near the corner of Pearl and West Chestnut streets, directly adjacent to Parlour.

"What we're bringing to the table is an asset to Jeff," Resch said. "It's going to be a destination to bring people downtown. You can tell by the drawings that we've put a lot of thought, time and effort into it. We're going to throw the right amount of money at it to make it a good project."

The sprawling layout for Union Restaurant & GameYard will comprise two houses sitting on West Chestnut St., the parking lot that separates them and an empty yard behind one of the houses.

The parking lot will be transformed into a green space that will be lined with astroturf. In place of the grassy void will be a 3,922 square foot structure, which will serve as the main dining and gaming area for the venture.

"It's not a nightspot," Resch said. "It's a family-oriented, communal-type restaurant. We want to be user-friendly to everybody. There are games, food. It's different than a typical bar or restaurant."

Though Resch and Sprigler own the buildings, Bobby Bass of Southern Hospitality is partnering with Levi Donaldson as the owner of the concept being brought to the location. Bass and his wife are behind other popular operations in the area, including MESA in New Albany.

"It's really taken a life of its own," Bass said. "We wanted to do something very unique that really draws people in and becomes a centerpiece for the city. It pulls people from Louisville and other areas in the region. Just a really unique venue that has great food, great bars, great drinks, but also has that gameyard feature with a lot of unique games you can't get anywhere else."

Those games will include curling, bocce ball and several others. Games will be cycled and rotated dependent on popularity. During colder months, some will be brought into the new structure.

"That's the key — indoor and outdoor," Bass said. "We didn't want to do great for six months and then hemorrhage revenue for the other six. We want to be able to bring everything we have fun outside and bring it inside as well."

Bass said the team had their own vision, but also peppered in ideas from other concepts from around the country, including Sun King Brewery in Carmel.

Spread throughout the green space will be about eight cabanas that will sit roughly 10 feet from the new structure. Hinged garage doors on the side of the building will serve as covered awnings under which guests can sit when opened. Shrubs and 25 new trees will be planted in the green space as well.

The house directly next to Parlour does not yet have a tenant, though Resch said he's working to get a "fast-casual" restaurant in the space. The yellow house, which used to serve as the regional office for Indiana Landmarks, will not be physically altered, but it will see some cosmetic changes, including new paint.

Patrons will be able to utilize the rooms in the house for parties and group watching events on a first-come, first-served basis.

"If you come with eight guys wanting to watch a ball game, and there's a room that's available that has a TV and some couches in it, you can use that for the night," Resch said. "If you came in and have a birthday party, you can get that room for the night. You don't really reserve it or pay for it."

A few handicap parking spots will be available on site, though a majority of customers will have to park on the street and in nearby public parking lots. Some residents raised concerns on the limited parking in the area, but Resch said it's not necessarily a bad problem for a city to have.

"To me, if you have a parking problem in your city, it’s a good problem, because people are coming to your city," he said. "If your parking lots are empty, it's a bad problem. No matter where you go, unless you're going to a strip center or a restaurant, you've got to park a couple blocks away. On Bardstown Road, in downtown Louisville and in New Albany, you can't park right out in front."

The team hopes to open in time for the Kentucky Derby and its surrounding festivities next year, with construction on the new structure starting this winter.