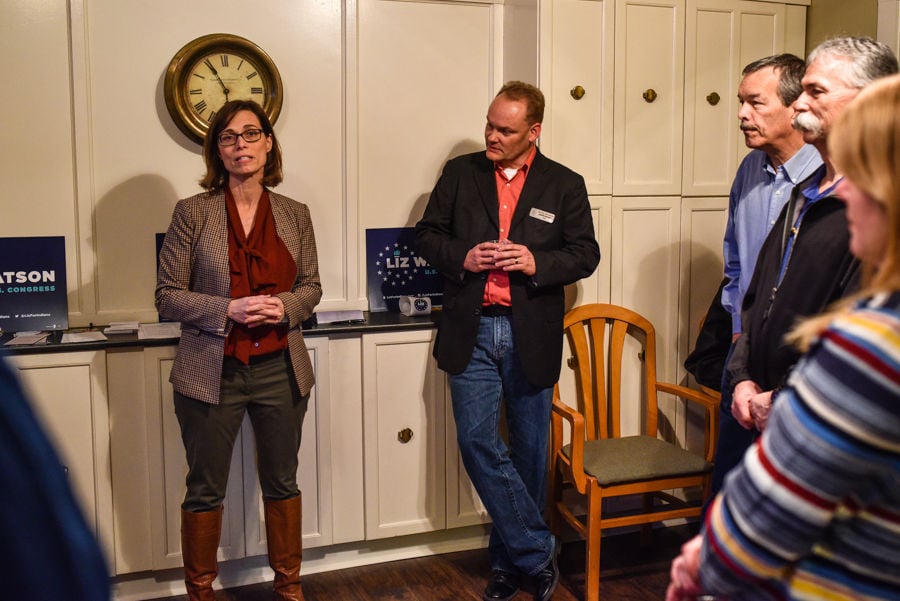 Liz Watson, left, speaks during the opening of her New Albany campaign headquarters on Feb. 9. 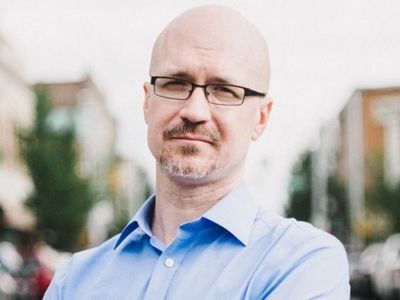 SOUTHERN INDIANA — If the primary election were held today, Liz Watson would win going away in the Democratic primary for the 9th District congressional seat, according to a recent poll.

The survey, conducted by Greenberg Quinlan Rosner Research, a firm based in Washington, D.C., sampled 400 Democratic voters across the 9th District. The poll was conducted using live telephone interviews on both landline and cell phones, March 3-5.

The numbers released Tuesday show Watson with a 13-point lead over challenger Dan Canon from New Albany. The same poll also showed a large amount of voters undecided. A third candidate in the Democratic Primary, Rob Chatlos, was not listed by name in the poll. Both Watson and Chatlos are from Bloomington.

Watson, Canon and Chatlos are vying to represent the party in November against 9th District Rep. Trey Hollingsworth, of Jeffersonville, who faces a challenger in the Republican primary, James Dean Alspach.

In the 2016 General Election, Hollingsworth, a first-time candidate in the district, defeated Democrat Shelli Yoder handily, 54.1 percent to 40.5 percent.

When reached by phone Wednesday, Watson said she is traveling the district each weekend and holding town hall meetings in several cities and towns, in an effort to get her message out to voters. She was also excited with the polling numbers.

"We are out in the district talking to voters about kitchen table issues that keep them up at night," Watson said, adding those issues include health care, education, the opioid problem and good-paying jobs.

The poll released Tuesday is misleading, said Dustin Collins, campaign manager for Canon, who was unavailable for a phone interview Wednesday. Collins said an internal poll, conducted through telephone calls to Democratic voters and those newly registered to vote, shows Canon with a double-digit lead. He said "the campaign is going great."

But Brian Peters, campaign manager for the Liz for Indiana campaign, said his candidate has $165,000 on hand to spend, more than the other two candidates in the field combined.

“Not only do the poll numbers show our campaign with a large lead, but we also have the resources to get Liz’s message out to every voter in this district. That is a good thing, because they like what they’re hearing," Peters stated in a news release.

Watson also said she has garnered support from 27 labor unions across the state.

"People are ready for a candidate who will fight for them, and who will show up," she said, adding that Hollingsworth has been a no-show in the district since his election. "Our numbers show the hard work has paid off and that voters are ready for real representation."

Canon is garnering endorsements, as well. The Floyd and Clark County Stonewall Democrats endorsed him on Monday, a campaign news release stated. Stonewall Democrats "work to elect pro-LGBT Democrats in federal, state, and local elections...," according to the national website. The same release noted a Canon endorsement by SoINdivisible, the Southern Indiana Indivisible chapter, originally an anti-Trump group that now "advocates for a progressive agenda that protects the rights and well-being of all people."

Collins said the Canon campaign has received "overwhelming support" as it campaigns across the district.

"I am not worried about the poll [showing Watson leading] at all," he said.

Watson said she not only has widespread support from labor unions, but also from progressive groups in the 9th District.

"We are rebuilding the Democratic party across the district with progressives and working Democratic voters," she said. "They know I will fight for them, fight for working families across Southern Indiana.

"I am the candidate that can bring together the Democrat majority that is needed to win in November."

Greenberg Quinlan Rosner Research has been in the polling business for more than three decades, according to its website.