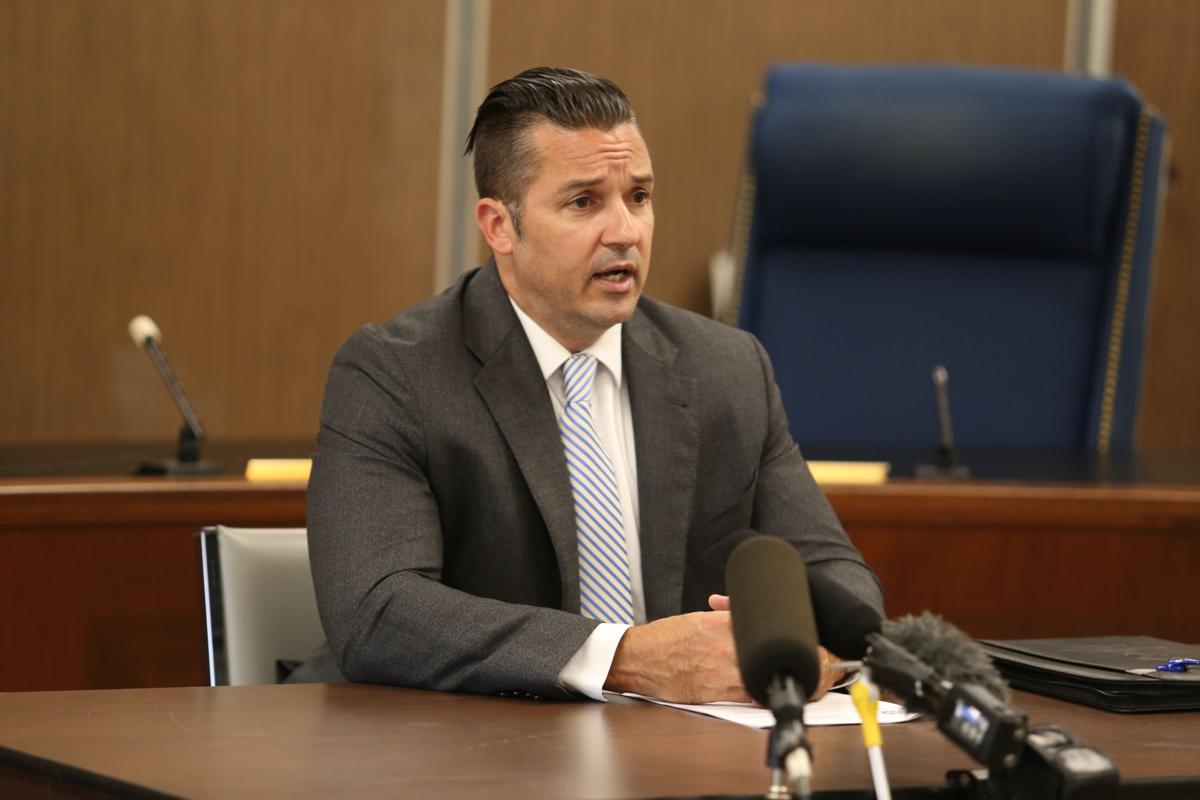 Clark County Prosecutor Jeremy Mull discusses the details of his investigation of the death of Malcom Williams during a press conference Wednesday in the Clark County Government Building. 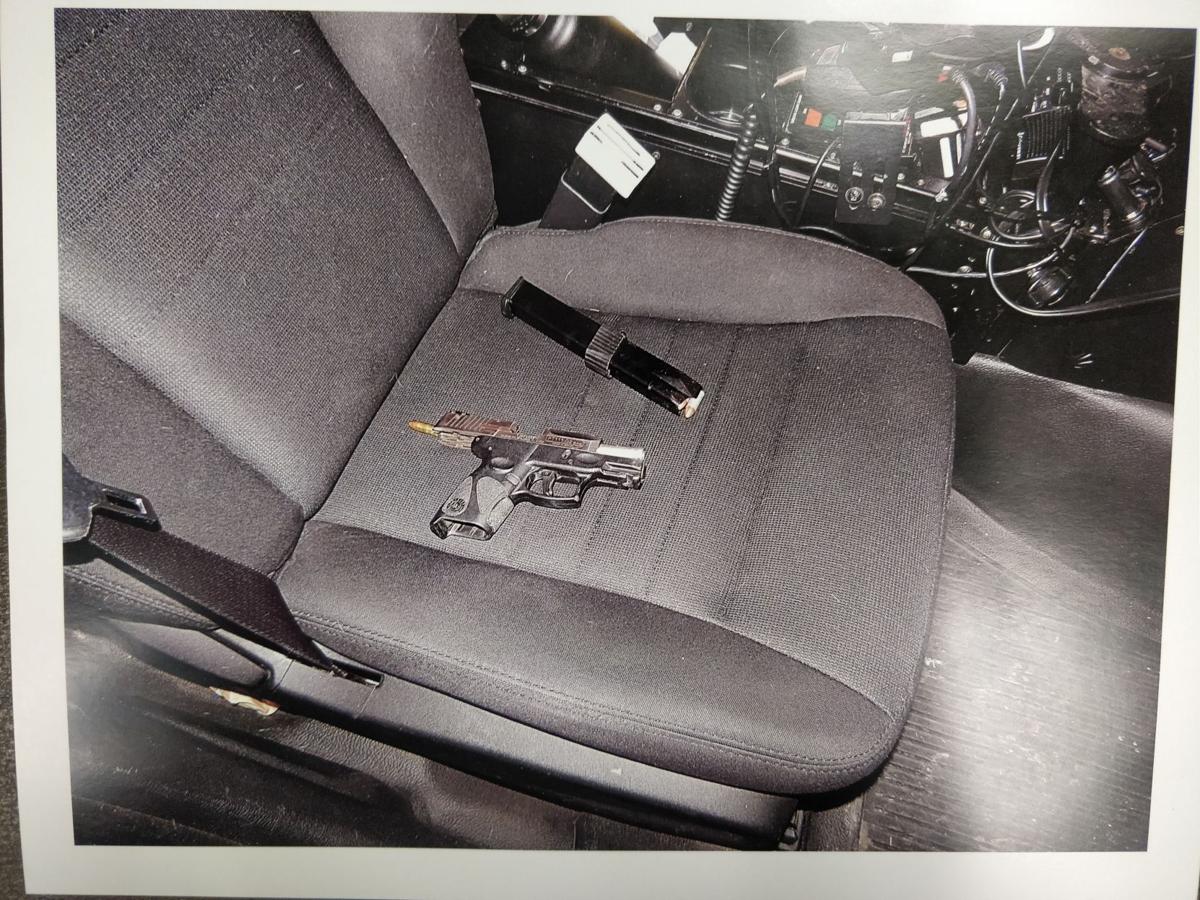 Police say Malcolm Williams had this gun when he fired at an Indiana State Trooper April 29 at a traffic stop. The trooper returned fire, which was fatal. 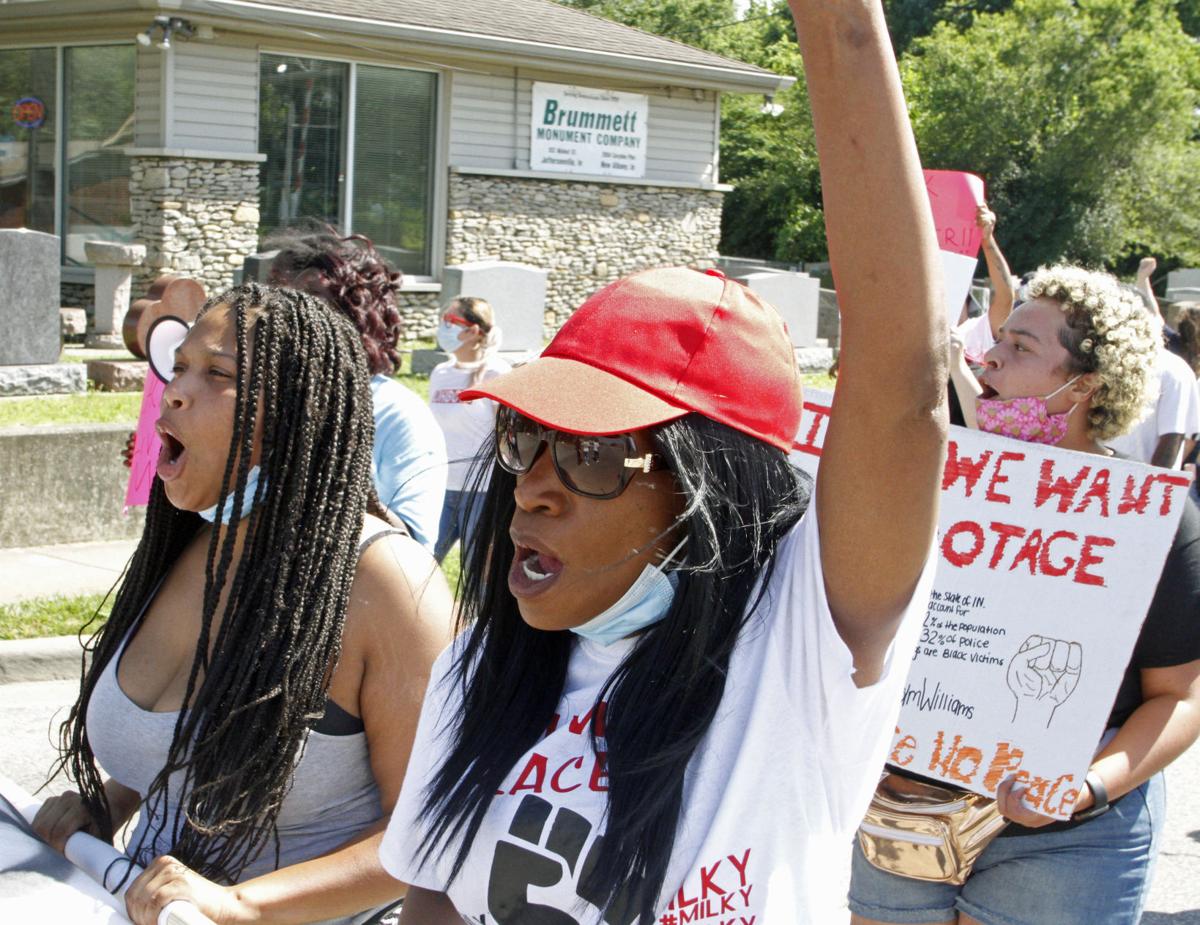 Protester Tara Bryant (right) marches on 10th Street in early June. Her son, Malcolm Williams, died after he was shot by an Indiana State Police trooper in an incident in April. Family and friends were seeking more information from police.

Clark County Prosecutor Jeremy Mull discusses the details of his investigation of the death of Malcom Williams during a press conference Wednesday in the Clark County Government Building.

Police say Malcolm Williams had this gun when he fired at an Indiana State Trooper April 29 at a traffic stop. The trooper returned fire, which was fatal.

Protester Tara Bryant (right) marches on 10th Street in early June. Her son, Malcolm Williams, died after he was shot by an Indiana State Police trooper in an incident in April. Family and friends were seeking more information from police.

JEFFERSONVILLE — Findings from a months-long investigation into the fatal shooting of a Clarksville man by an Indiana State Trooper show the officer was justified in using deadly force, Clark County Prosecutor Jeremy Mull said Wednesday.

Malcolm Williams, 27, died just before 1:30 a.m. April 29 after being shot by Indiana State Trooper Clay Boley, of the Sellersburg post, during a traffic stop. Boley’s report is that he returned fire when Williams shot first, and Mull’s report said evidence supports the trooper’s account, although there was no video footage of the incident.

The shooting was investigated by the Indiana State Police Versailles District, with the case provided to Mull for review on June 16.

According to police, just before 1 a.m. April 29, Boley stopped a 2008 Buick with no tail lights on Middle Road in Jeffersonville. A woman was driving and Williams was the passenger. The investigation shows that when the trooper asked for identification, the woman did not have her ID and Williams gave his brother’s name.

Mull said the trooper had doubts about Williams’ identity. About then, the driver, who was pregnant, began having possible labor pains. The officer called an ambulance and was going to allow Williams to go to the driver’s side of the car to comfort her as they waited, after he was patted down. During the search, Boley found a magazine clip for a semi-automatic weapon. Williams said he had no gun in the car, but the trooper asked him to return to his seat.

At that time, Mull said the trooper saw Williams “staring at him with a ‘blank stare’ in his eyes, and Trooper Boley began to suspect that Mr. Williams was about to take some unknown action,” according to the report. He said Williams then quickly reached into the glovebox, pulled out a handgun and began shooting at Boley, who was standing next to the passenger-side door.

The trooper was able to block the hand with the gun between his arm and torso as Williams fired three shots and Boley returned six, all which hit Williams at close range — two in the side and four in different parts of his back. The trooper tried to avoid hitting the woman, who jumped from the driver’s seat of the car into the roadway when shooting began.

Mull said the shooting happened in a matter of seconds. “The evidence is that this happened in a very, very short amount of time...I’ve reviewed many shootings and...shootings tend to happen in mere seconds — one or two or three seconds.

“The trooper had — for lack of a better word — trapped Mr. Williams’ handgun up against his body and was holding it to avoid being shot. And trying to get to his own weapon while trying to avoid the gunfire that was coming out of Mr. Williams’ weapon.”

Boley and subsequent officers and EMS rendered aid but Williams died en route to the hospital.

Mull said the officer was justified in using the gun and will not face charges because under Indiana law, a person is justified in using deadly force if the person “reasonable believes that force is necessary to prevent serious bodily injury to the person or a third person or the commission of a forcible felony...,” the Indiana code reads in part.

Mull said that while the woman said she did not see all of the interaction, her accounts corroborate what the trooper said happened. So does evidence such as scene recreation into how a bullet would have landed in certain situations, he said.

In the months since Williams’ death, his friends and family have hosted several peaceful protests in Southern Indiana, calling for transparency in the case. They were told early on that no footage of the incident existed, and Indiana State Police confirmed that the district does not use body cameras and has only two in-car dash cameras among the more than 40 troopers. Boley’s police vehicle was not equipped with a camera.

The trooper was placed on administrative leave following the shooting, and returned to restricted duty from May 10 to 25. He worked on patrol but under supervision from May 25 until May 28 and resumed normal solo patrol May 28.

He was hired in December and is still on probationary status, which is set to expire Dec. 18.