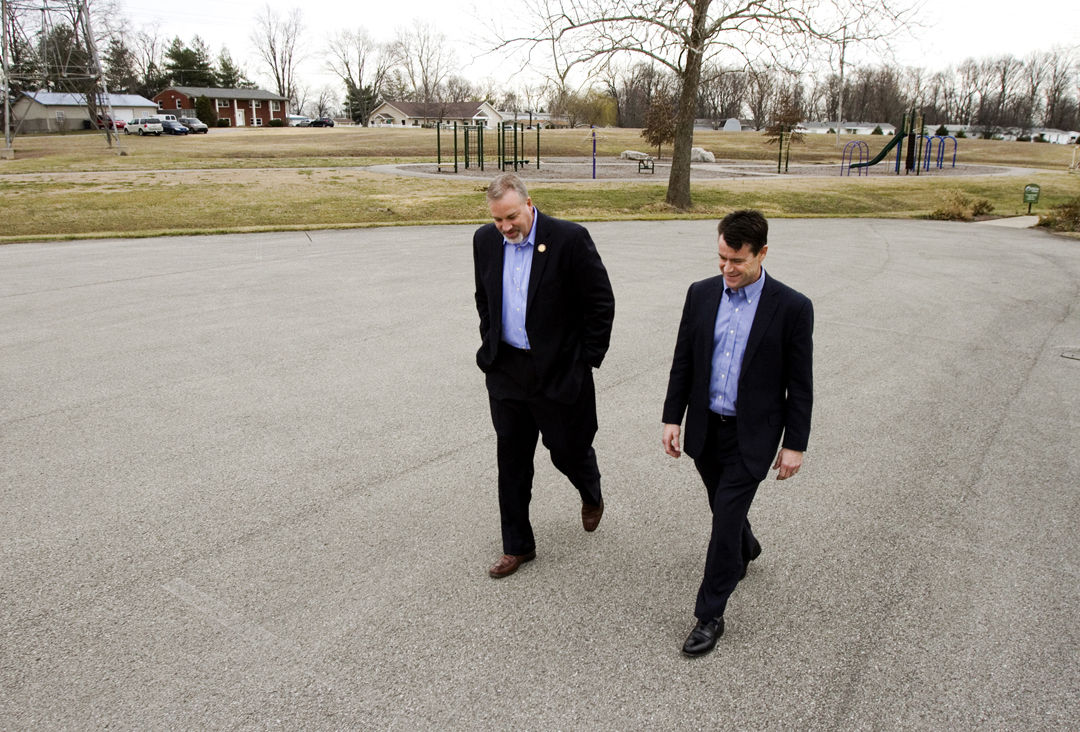 Rep. Todd Young, R-Indiana, speaks with Childplace Inc. CEO Nathan Samuel while touring the adoption, counseling, foster care, and residential treatment not-for-profit agency in Jeffersonville on Monday afternoon. Young is currently working on the Modernizing the Interstate Placement of Children in Foster Care Act, which aims to decrease placement time for children in the foster system. 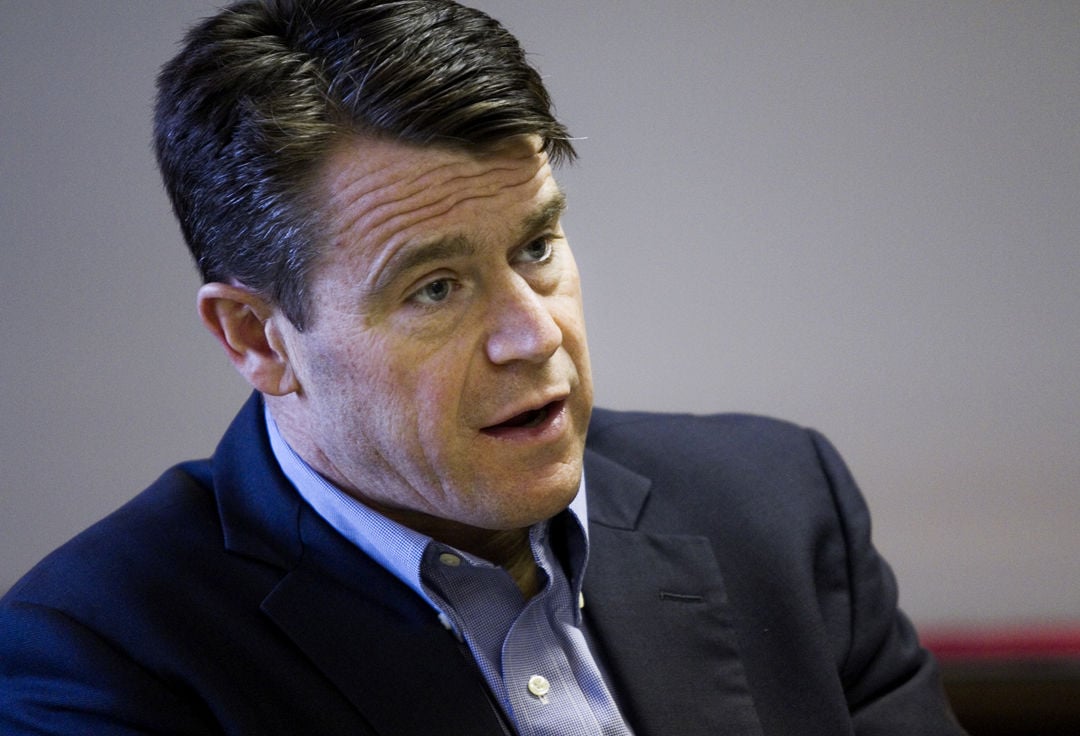 Rep. Todd Young, R-Indiana, speaks with Childplace Inc. CEO Nathan Samuel while touring the adoption, counseling, foster care, and residential treatment not-for-profit agency in Jeffersonville on Monday afternoon. Young is currently working on the Modernizing the Interstate Placement of Children in Foster Care Act, which aims to decrease placement time for children in the foster system.

Editors note: This story has been updated to reflect the ultimate goal of the legislation as long-term placement.

JEFFERSONVILLE — Rep. Todd Young, R-Indiana, visited Childplace Inc. in Jeffersonville on Monday to learn more about the children's services nonprofit organization that may be benefiting from legislation he introduced.

"You never know exactly what you're going to learn on some of these visits, but so many of the legislative efforts I've been involved in have actually bubbled up from conversations with Hoosiers as opposed to being catalyzed in Washington D.C.," Young said. "It's an important part of my job."

The congressman mostly asked questions during his visit, briefly discussing his legislation that he said will likely move forward in "the very near term."

The visit is amid Young's bid for Senate, two months before he faces Republican Marlin Stutzman in the primary.

The bill, called Modernizing the Interstate Placement of Children in Foster Care Act, seeks to decrease the amount of time it takes to place children in long-term foster care, with relatives and adoptive families in other states. The act incentivizes states to implement the National Electronic Interstate Compact Enterprise, or NEICE, system for placement across state lines.

Organizations that implement the system would receive reimbursements through future government savings if those organization meet certain outcomes.

"So it's just a new financial device to try and end empower not for profits to go out there and help people because I happen to think government doesn't do direct provision of social services very well," Young said.

Most agencies still use paperwork when placing children across state lines. In the six pilot states NEICE has been tested, including Indiana, wait times have been reduced as much as 30 percent and is expected to save $1.6 million per year among participating states in copying, mailing and other costs.

Young's goal is to remove barriers to long-term placement, with adoption as an ultimate goal.

The legislation comes at a time when agencies grow overburdened with the number of children who need foster care, surging because of a rise of opioid addiction.

In the last year, the number of Indiana children needing help from the Department of Child Services has skyrocketed by 25 percent. The state agency estimates 2,600 children had to be taken from homes during a six-month period ending March 2015 because their parents were using drugs.

Danielle Christian, foster care manager, said Childplace has significantly more babies in need of foster homes partly because of parents who are addicted to substances.

"It's significant, the rise of heroin specifically," Christian said.

Young asked whether using more evidence-based practices — something the congressman said he's interested in — has led to better rates of foster care to adoption.

"I definitely noticed changes through the use of the evidence based practices," Christian said. "I see the changes with the kids more than the rates of their families or the rates of adoption and foster care."

Evidence-based practices use solid scientific findings of whether programs are successful, instead of anecdotal evidence or the number of people served.

"I just want to make sure that any services that the federal government is funding are grounded in some sort of studies, evidentiary studies that show they actually work and improve the lives of recipients," Young said. "We shouldn't measure compassion in this country based on the amount of money we throw at a problem. Instead, we need to measure it based on outcomes."

He also asked whether Childplace is faith-based or has affiliations with any churches.

"Some of these evidence-based practices, controversially, they do involve a religious dimension to them," Young said. "It's hard to disaggregate that from the overall effect sometimes from what I understand, but my sense is it does make a difference."

The organization was founded by members of Northside Church of Christ, but CEO Nathan Samuel said no formal ties exist these days. However, Samuel said he considers Childplace a "faith-based agency."

"I think it permeates everything we do," Samuel said.

Childplace tries to implement any activity that promotes "kids being kids," including youth group events through churches, Brian Davis, director of services, said.

"Certainly the evidence shows that the more supports a young person can have in his or her life, there is no doubt that that has an impact," Davis said.

A RUN FOR SENATE

Young pushes ahead in his Senate bid after his candidacy was under question.

The Indiana Election Commission ruled 2-2 to allow Young to run on the Republican primary ticket despite claims, refuted by Young, that he failed to get the required number of signatures.

When asked whether he knew the number was cutting it close, he said, "All I know is that we're going to be on the ballot, that the challenge emerged because Democrats clearly don't want to run against me."

Young will face Democrat Baron Hill in the general election if nominated in the primary.

"I beat Baron Hill before. Democrats, including Baron Hill, know I can beat him again," he said. "So I'm just really focused on getting back to the issues that Hoosiers care about like jobs and the economy, safety and security and making sure we actually get things done in Washington."

If elected to the Senate, he may be among the group that confirms a new Supreme Court justice next year under a new president.

Young pointed out the Senate's role to "advise and consent" a president's pick comes before the actual nomination.

"So the current U.S Senate, which was just elected a little over a year ago, they are fulfilling their constitutional responsibility by advising this president of the type of nominee they'd want," he said. "They'd want a constitutionalist, someone like a [Antonin] Scalia that doesn't make up new law or legislate from the bench but instead grounds their decision in the constitution and to me, that's entirely acceptable."