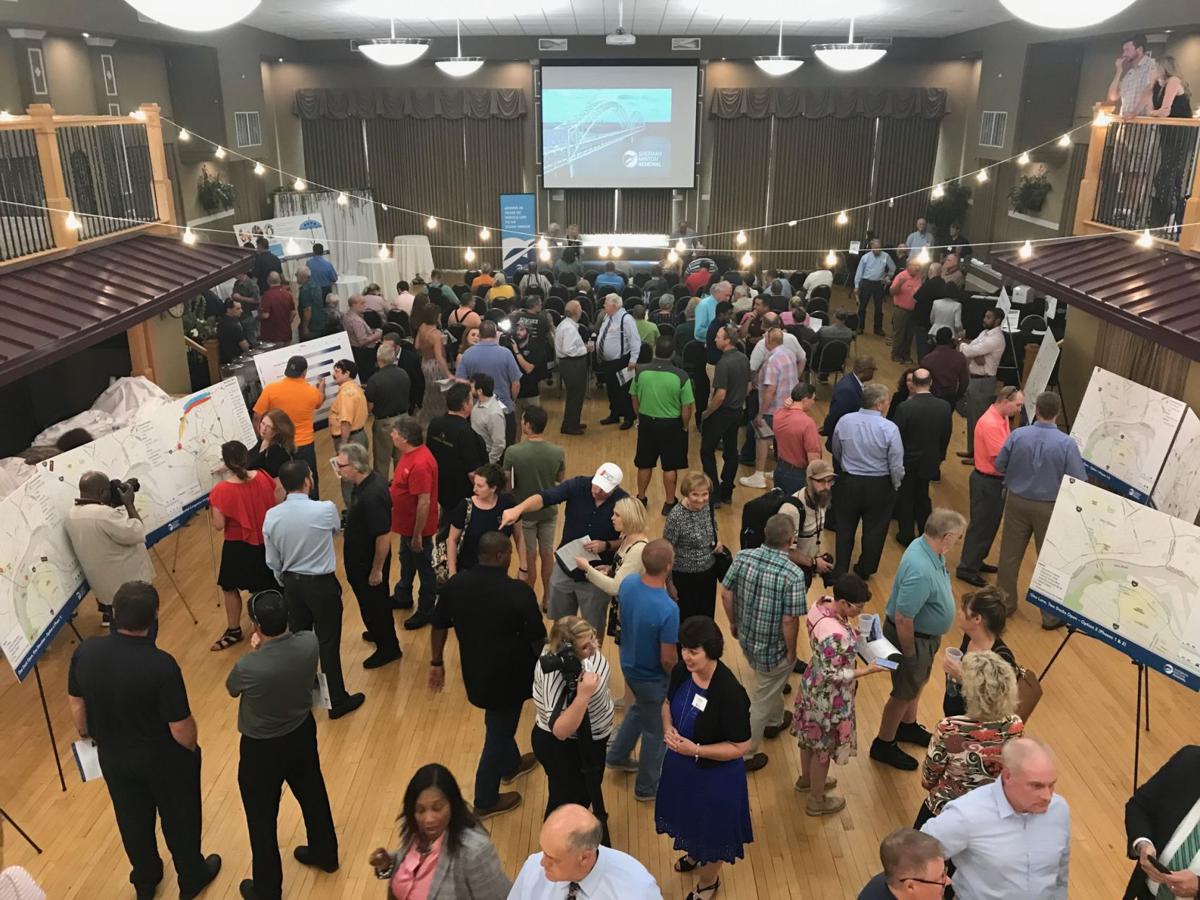 New Albany residents gathered at the Calumet Club on Thursday to learn more about traffic options during the rehabilitation of the Sherman Minton Bridge, which is expected to begin in 2021. 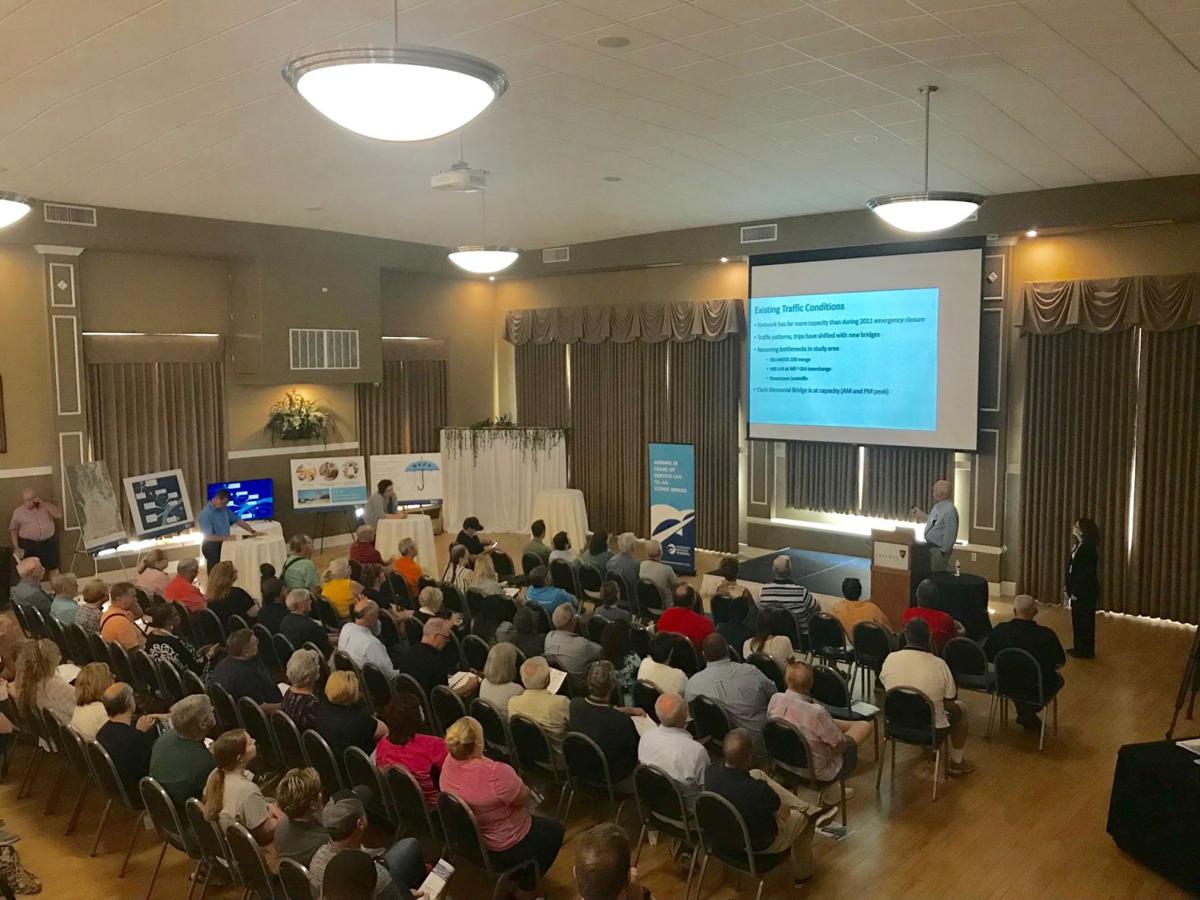 New Albany residents gathered at the Calumet Club on Thursday to learn more about traffic options during the rehabilitation of the Sherman Minton Bridge, which is expected to begin in 2021.

NEW ALBANY — Residents, commuters and business owners are preparing for another extended closure of the Sherman Minton Bridge.

Unlike the previous unexpected closure of 2011 after a crack was found, all involved have a chance to weigh their options this time. To help keep the public informed, project representatives organized open houses in Louisville and New Albany this week, the latter on Thursday.

“The purpose of the open houses this week is to share with the public what maintenance of traffic options the project team has been looking at and evaluating in recent weeks," said Andrea Brady, spokesperson for the Sherman Minton Renewal Project. "There’s been extensive traffic modeling going on, and these options are designed to show the public what could be done and the impacts to traffic based on the existing network and congestion. It’s trying to predict what the traffic diversion would be.”

Included in the presentation were six different options for traffic flow — full closure, two lanes open on both decks, one lane open on both decks, and three options for one-deck closure with traffic flow that would alternate between morning and afternoon commutes. The shortest project duration would be a full closure, lasting 15 and 23 months. Conversely, the latter three options would be the longest, lasting 26 to 38 months.

According to Brady, the final plan will more than likely be a combination of strategies. Though the exact plan is yet to be known, she noted that a full closure for the entire duration of the project was not on the table.

“I will tell you that there are no plans to fully close the Sherman Minton for the duration of the project," she said.

The reason for the closure is not for aesthetic reasons. Rather, it's to replace outdated structures to improve the strength of the bridge.

“The intent is to get it up to a condition where we get another 30 years of life out of it," project manager Mary Jo Hamman said. "It’s truly a bridge rehabilitation.”

It isn't just the main span that will see construction. Hamman said that approaches and smaller bridges connected with the system will also have work done on them.

"The concrete decks on the Kentucky approach and the main channel spans over the water are the original concrete decks that were built back in the 1960s, which is really a good testament to the work that was done back then," Hamman said. "Normally, a deck will last for 20 years before you have to put a new overlay on it, very much like putting a new set of shingles on your roof. We’ve done some repairs to those over the years, but the meat of that is still original. As part of this work, we’ve got some structural steel repairs and replacing the decks on the Kentucky approach and the main channel. Both sets of those structures will get a completely new coat of paint.”

Additional overlay work will be completed on the Indiana side of the system, including stretches of Interstate 64 and Interstate 265. One contracting team will be selected for the entirety of the project instead of being segmented.

The process for selecting a contractor will be different than that usually used. Instead of choosing the lowest-priced bidder, the renewal team will instead look at a multitude of factors as part of a "design-build and best value" project.

“It’s not necessarily going to be the lowest-priced contractor that’s going to be the best value," engineering manager Aaron Stover said. "We’re going to ask them to reduce the overall impact to traffic. That can be in terms of the total duration of the project or the amount of traffic that’s detoured."

One common way to do that is called the lane rental concept, where each lane closure is assigned a dollar value.

"As you accumulate those lane closures, they add to your bid price," Stover said. "The contractor with the lowest overall effective bid price including those lane rentals will be selected as the design bid with the best value for the project. That’s one way to incorporate that. There are other means that you can use to get additional value out of that through innovative approaches or by adding additional scope without additional costs. We’re not at that point yet. We’re still early in the process trying to evaluate the traffic impacts, but those are some thoughts that are going into the evaluation.”

The goal, according to Stover, is to have a contractor selected by fall 2020.

Regardless of which option is chosen, it will undoubtedly have an effect on New Albany.

Business owners attending the meeting expressed worries over the future, given the duration of the project.

"It's going to affect business greatly and the amount of foot traffic," said Brigid Morrissey, who owns the co-working space the Root. "People will start avoiding the city all together. People won't even be coming by downtown New Albany. Of course I'm concerned as a business owner."

To Morrissey, the best option is a partial closure, where lanes are open toward Louisville in the morning and reversed toward New Albany in the afternoon.

"That's where the majority of the traffic is going to go," Morrissey said. "That's the path of least resistance where you can get the best of both worlds. It's obviously the lesser of two evils. That seems to be the way to accommodate the most people."

Andrew Nicholson, whose independent business aims to strengthen New Albany's downtown business core, said he would consider a full closure if it meant a shorter project duration. The downside of that, he said, would be worsening conditions for pedestrian traffic.

"I skateboard everywhere downtown to my 11 clients," Nicholson said. "The pedestrian traffic is already a nightmare. It’s just going to add to that if they do a full closure.”

If no benefits are gained from a full closure, though, Nicholson said the best option would be to keep at least some traffic open during the project.

“New Albany is growing, and it has this momentum," Nicholson said. "It’s attracting the attention of small, local business owners, like myself. Even people from Louisville who already have restaurants are coming now. No matter what, it’s going to slow that momentum, but we can’t just stop that momentum entirely."