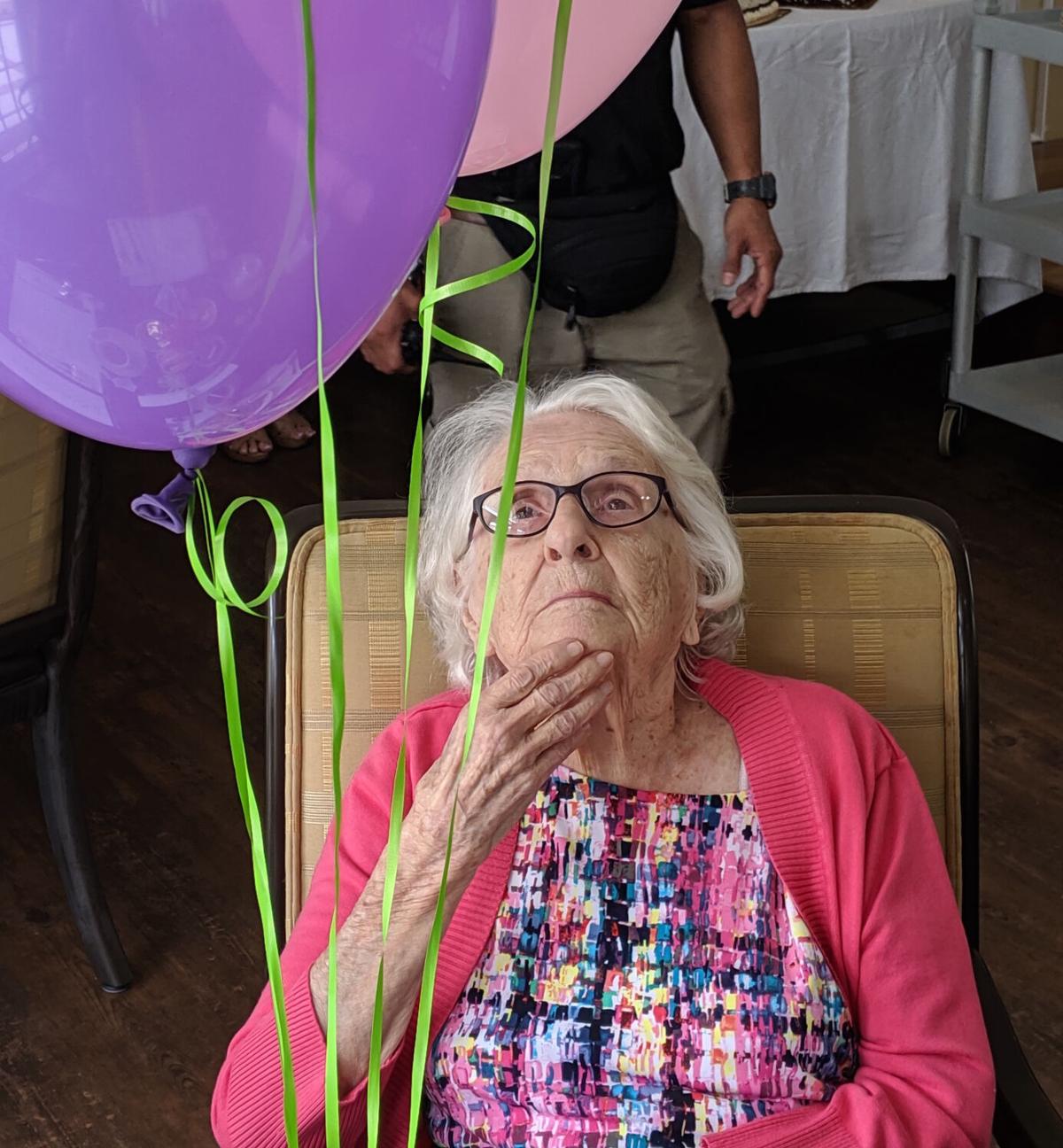 New Albany native Ruth Hancock died at age 105 in late December. She is pictured at her 100th birthday celebration.

Ruth Hancock died in December at age 105 after decades of service and dedication to her New Albany community.

New Albany native Ruth Hancock died at age 105 in late December. She is pictured at her 100th birthday celebration.

Ruth Hancock died in December at age 105 after decades of service and dedication to her New Albany community.

NEW ALBANY — Ruth Hancock, a New Albany native who was devoted to her community, lived life to the fullest for more than a century.

Hancock died Dec. 23 at age 105. Throughout her long life, she worked for her family’s floral business and dedicated decades of service to the community.

She was married to William Hancock, an acclaimed New Albany artist, for 69 years until he died in 2003.

She lived in New Albany throughout her life until five years ago, when she moved to an assisted-living facility in Florida to be near her grandchildren.

Hancock was a member of the family that founded Nance Floral Shoppe in New Albany, and she worked in the shop for nearly 80 years.

She was an active member of the local chapter of Tri Kappa, a philanthropic sorority, for 81 years, and she taught Sunday school at Trinity United Methodist Church in New Albany for more than 50 years.

Barbara Carnighan, president of the New Albany Tri Kappa Associates, said she probably knew Hancock her entire life — first from her work at the floral shop and then through Tri Kappa.

“She was never anyone who expected anything — she was always giving,” she said.

Carnighan, who has been involved about 45 years with the organization, said she can’t remember a time when Hancock wasn’t at a Tri Kappa meeting, even when she reached ages 99 and 100.

As a Tri Kappa member, she was always one of the first to contribute donations for the Riley Hospital for Children, and she always brought in dry goods for the Hope Southern Indiana pantry, Carnighan said.

Hancock truly loved her community and the people of New Albany, she said.

Hancock’s nephew, Steve Nance, now co-owns Nance Floral Shoppe with his sister, Carol. Hancock’s father, George Sr., founded the shop in 1919, and she helped her brother, George Jr., run the shop when he took over ownership.

Nance said his aunt was “outgoing and hardworking,” and the shop was simply a big part of her life, even when she was well past retirement age.

“You could just always depend on her to do the right thing,” he said. “I think she just had everyone else’s interest at heart when she was at work.”

New Albany native Ed Condra is almost 82, and he has known Hancock since age 10. He first met her through Trinity United Methodist Church, where she taught him in Sunday school.

“[The Hancocks] more or less just took me under their wing,” he said. “Bill taught me how to swim at the Colonial Club, and Ruth just always made sure I had something to do. They would have me over at house every once in a while and sometimes I would cut the grass.”

Condra said Hancock was known for her baking, including her famous cinnamon rolls that she sold at bake sales.

When Condra’s mother died, he told Hancock that she was going to be his “adopted mother,” he said.

“It was just like having another mama — I tell you, I miss her,” he said.

Sellersburg resident Betsy Walters also says Hancock was like a “second mother” to her. She first got to know her as a kid in New Albany in the early 1950s.

Hancock’s daughter was her best friend growing up, and Walters has many fond memories of spending time with the Hancocks — such as a “sock hop” she and their daughter had in their home and going shopping in Louisville.

As an adult, Walters continued visiting Hancock, and she was gifted her prized recipes such as apricot English muffins and tomato pie.

“Especially after my mom died, I could visit Ruth,” Walters said. “It was like I was home. She took care of me.”

Hancock was a wonderful woman who spoke her mind, Walters said.

“If you asked her what she thought, be prepared — she had an opinion and she was going to tell it,” she said. “Sometimes she was going tell it even if you didn’t ask. Back then, for a woman to speak out like that and have that much tenacity — she was very forward for her time.”

Norma Robbins, 86, said the Hancocks were her next-door neighbors when she was growing up in New Albany.

“My kids were small, and she and her husband were just wonderfully good to my kids — they were always doing things for us and always trying to do things to help us. My kids loved them, too.”

Handcock’s granddaughter, Laura Roberts, said her grandmother was so proud of her husband and his artwork, and she lit up when she showed his work to others.

Granddaughter Whitney Cash said she even took people to visit her room at the assisted-living facility so they could see the paintings by her late husband she had on display.

Cash said she attributes her ability to cook and bake to watching her grandmother cook while she was growing up, noting she “never bought a loaf of bread” because she would always bake them herself.

“She loved living there, raising a family there and making a difference to the community,” she said.

Roberts said Hancock was full of life to the very end, including during her time living at the Florida nursing home. She enjoyed doing all the activities, and she even ran a gift shop at the facility until age 103.

“Everybody always asks me…’your grandmother was 105, how does she live that long’?” she said. “She would always say to laugh and smile everyday and always stop and smell the flowers.”