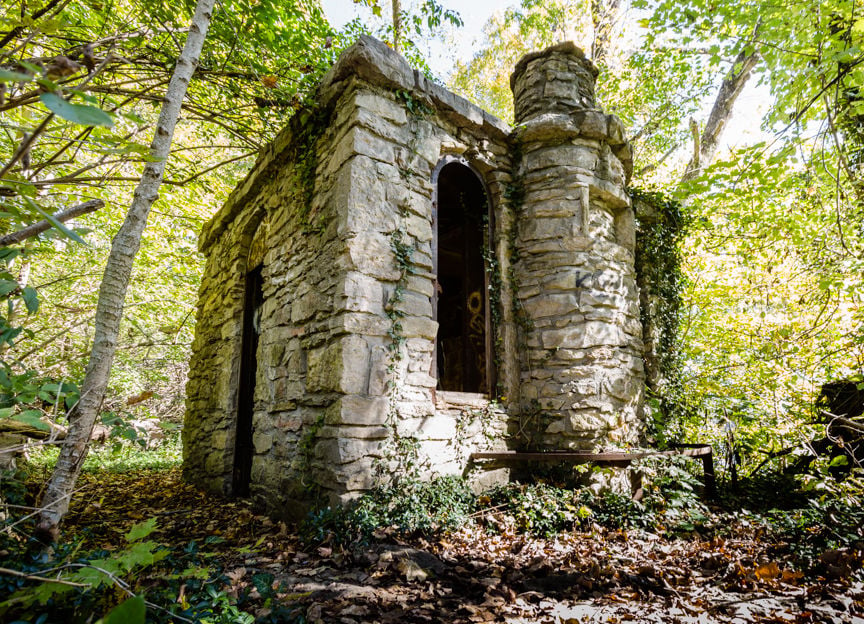 The most in-tact structure of the Witches' Castle is the small shack up the hill from the house's foundation. 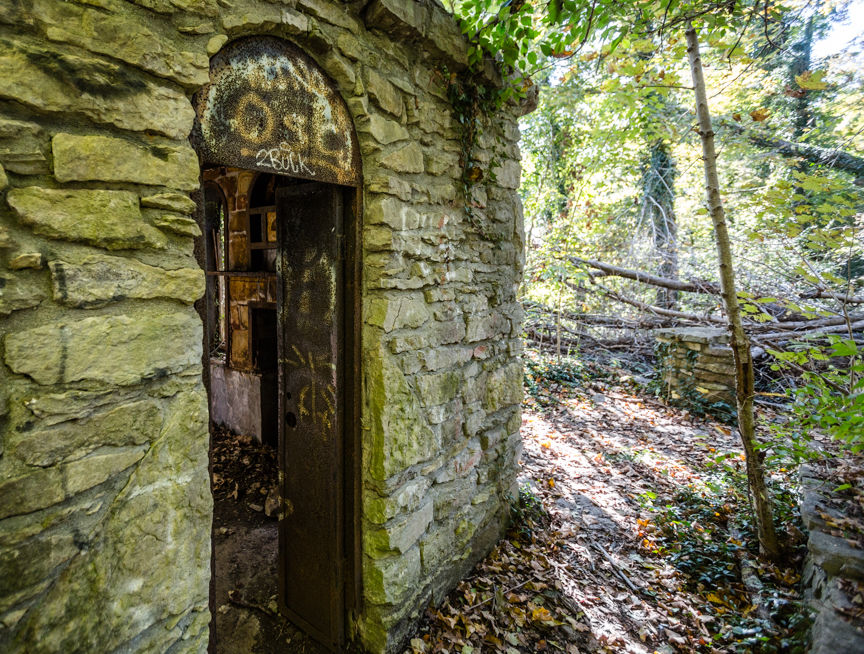 The front door of the Witches' Castle shack. 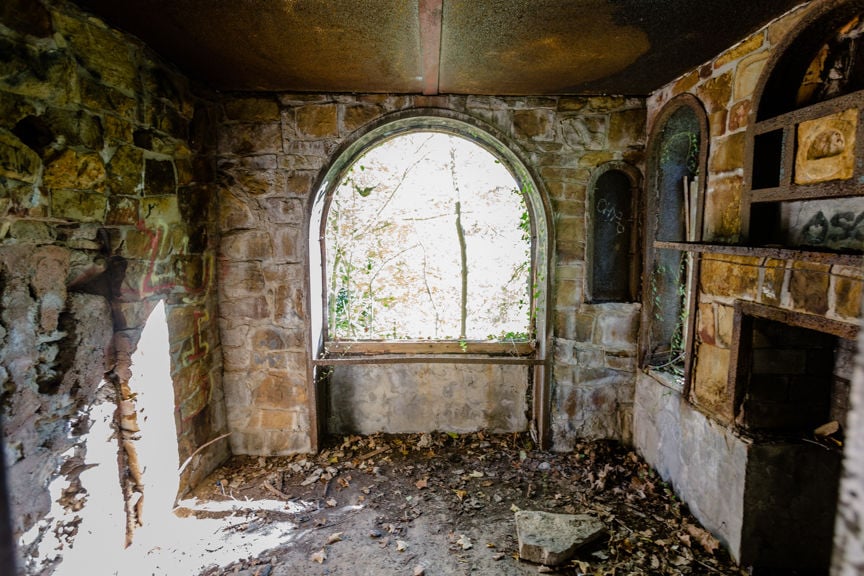 A large window over looks the Ohio River inside the Witches' Castle's shack. 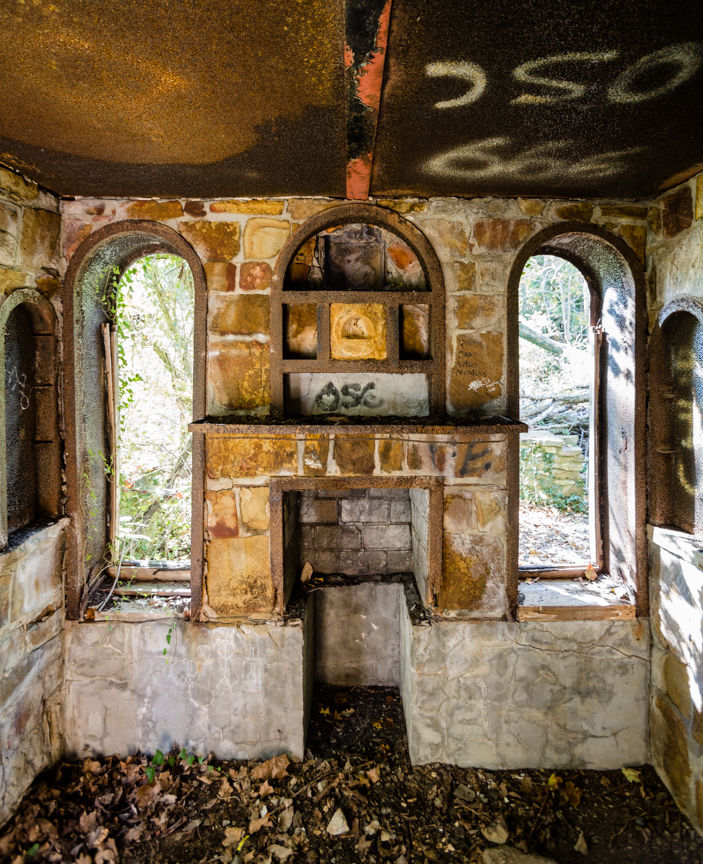 The east-facing wall of the Witches' Castle shack features a small fireplace and two windows. 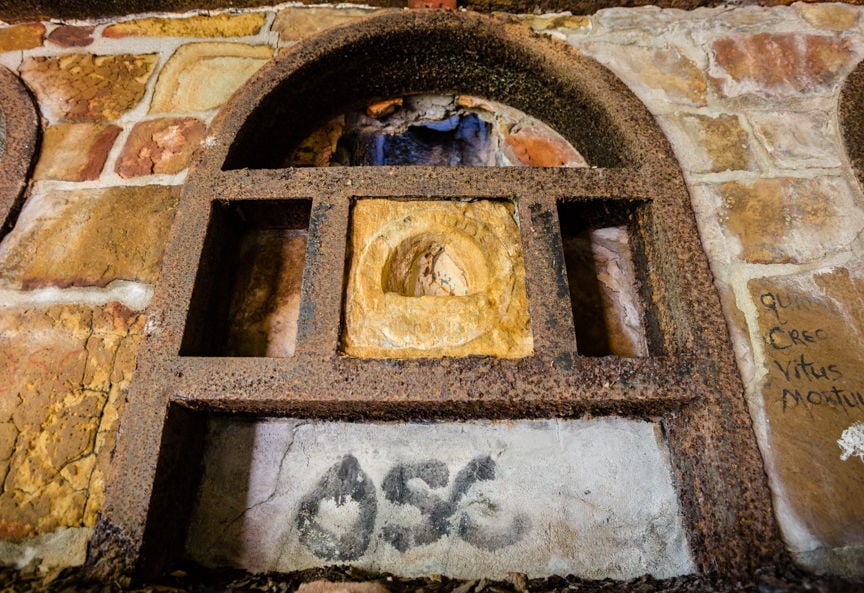 An angle on the mantle area above the Witches' Castle shack's fireplace. 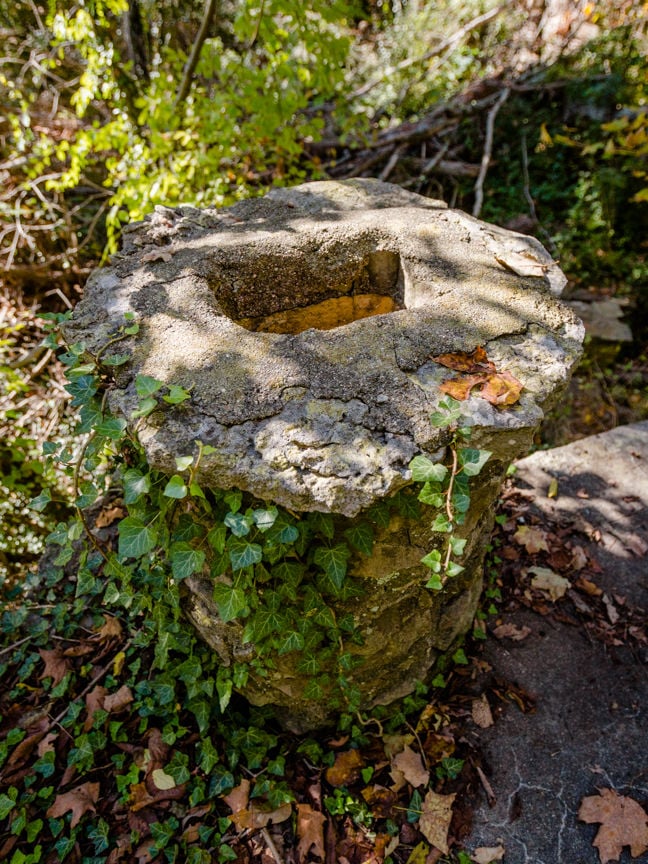 Vines grow up the chimney on top of the shack at Witches' Castle. 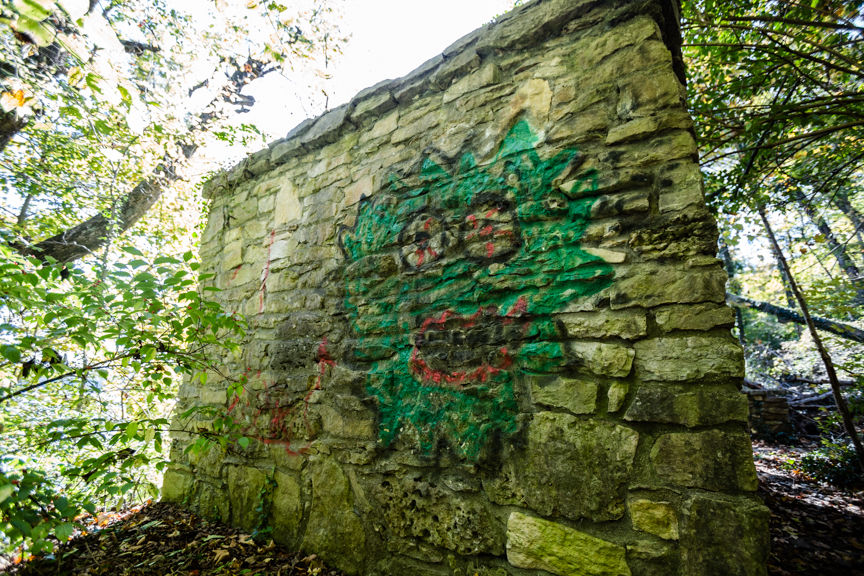 The exterior of the Witches' Castle shack's west-facing wall has a painted face on it. 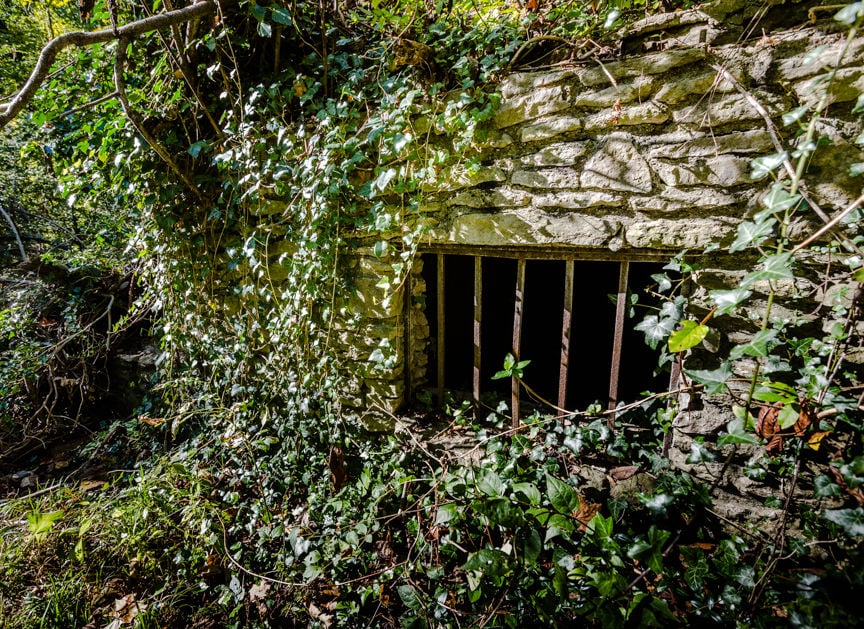 A barred window holds in the secrets of the house's basement at Witches' Castle. 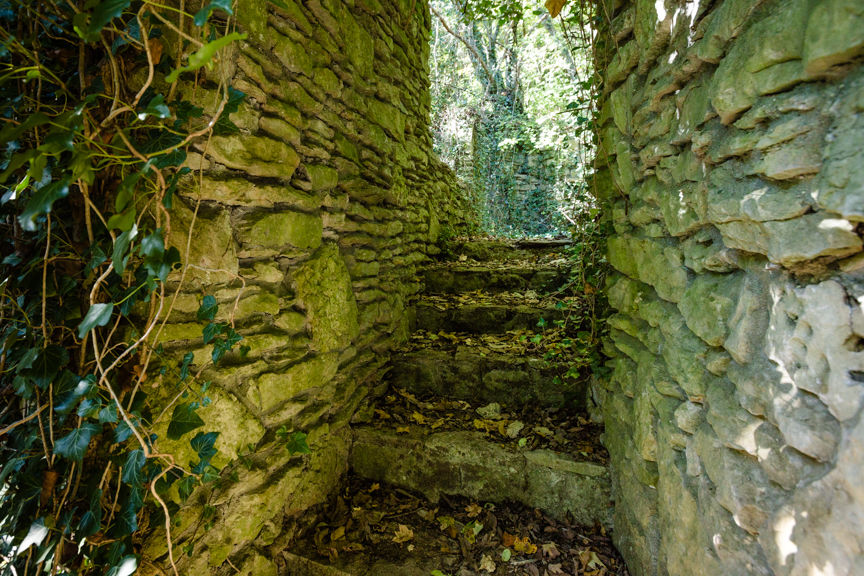 A skinny staircase made of stones leads up to Witches' Castle in Utica. 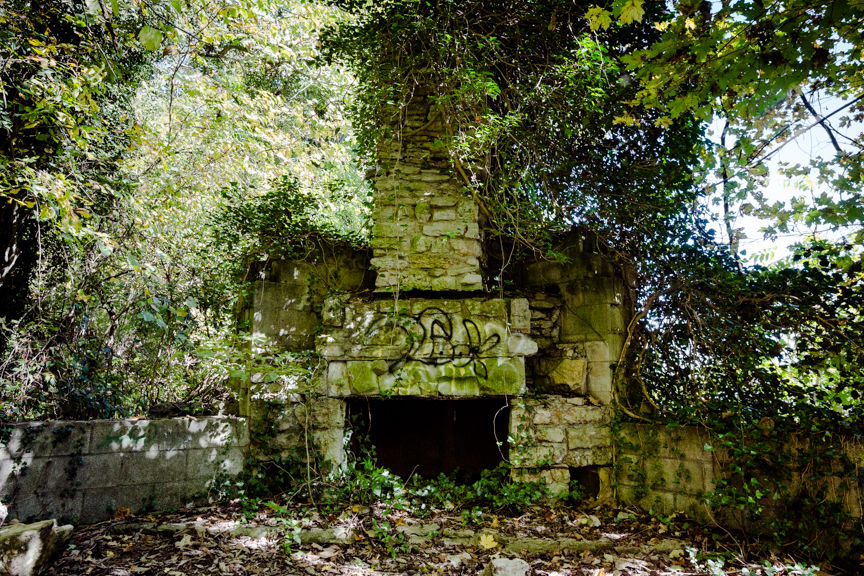 An angle on the fireplace on the foundation of the house at Witches' Castle. 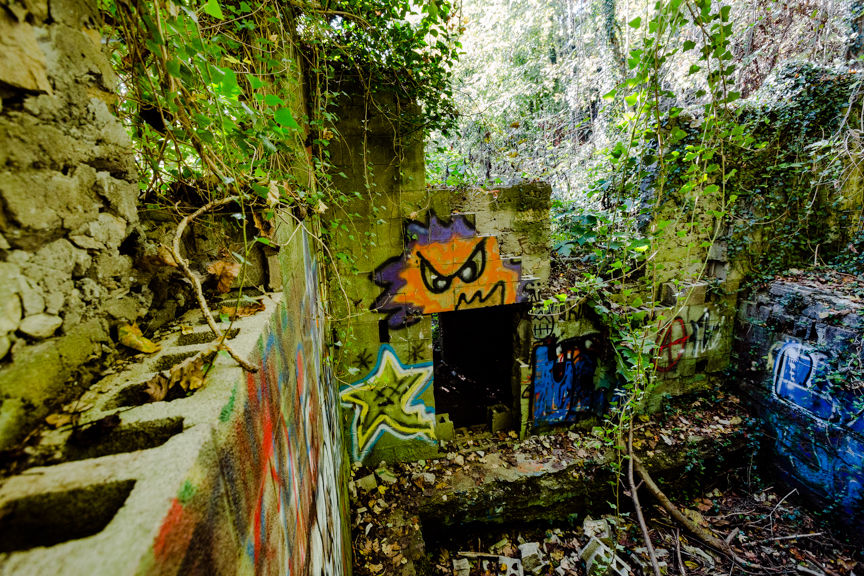 The filled in basement of the house at Witches' Castle.

The most in-tact structure of the Witches' Castle is the small shack up the hill from the house's foundation.

The front door of the Witches' Castle shack.

A large window over looks the Ohio River inside the Witches' Castle's shack.

The east-facing wall of the Witches' Castle shack features a small fireplace and two windows.

An angle on the mantle area above the Witches' Castle shack's fireplace.

Vines grow up the chimney on top of the shack at Witches' Castle.

The exterior of the Witches' Castle shack's west-facing wall has a painted face on it.

A barred window holds in the secrets of the house's basement at Witches' Castle.

A skinny staircase made of stones leads up to Witches' Castle in Utica.

An angle on the fireplace on the foundation of the house at Witches' Castle.

The filled in basement of the house at Witches' Castle.

UTICA — Legend says that a coven of witches used to live in the crumbling stone structure hidden in the trees of Utica’s riverside.

The other bucolic residents didn’t like the women and they burned down their home, earning the eternal ire of the sorceresses and giving their former house the infamous “Witches’ Castle” monicker.

Forever after, the site became a place for daring teenagers to explore and vandalize.

While Jenny Stewart heard that myth as a local high schooler in the ‘80s, she doesn’t believe it to be true, and neither does Darlene Roach, a former owner of the property.

That’s about where their similarities end.

Stewart, a paranormal investigator, thinks the ruins are forever haunted: the site of a shocking mass murder, while Roach claims that the property is sacred, and the former location of a legendary settlement.

Both could be correct.

Roach bought Mistletoe Falls in 1985. That was the name respectable residents of Utica used for the Witches’ Castle, Roach says, based on the indisputable fact that clumps of the green leaf blanket the property and a small waterfall used to run down the sloped land.

By the time Roach bought Mistletoe Falls, the property had fallen into disrepair, but at one time, it was a quaint refuge within the woods of Clark County.

J. Paul Druien owned the property in the 1940s, Roach said. A fact that is backed up by Clark County Recorder’s Office documents.

Roach said that Druien was recently separated from his wife, and he chose the property for its role in the legend of Prince Madoc.

Madoc was a Welsh prince who set sail to a foreign land, now thought to be America, in the 1100s, long before Christopher Columbus ever set foot on the continent.

While widely considered in the academic community to be unlikely, some historians believe Madoc and his crew landed in Alabama and eventually traveled all the way up to what is now Jeffersonville. There, they supposedly built a massive fort from stone, as well as satellite settlements.

Roach — and perhaps Druein — believed Mistletoe Falls to be one of those outposts.

Druien threw himself into building a home on the ancient land with the help of a contractor named Brownie King, according to Roach.

The house Druien created, located at the bottom of his property, was charming, but his real accomplishment was a stone chapel, connected to the house by a pathway.

The small oratory sat on a bed of limestone and was supposedly built from rock painstakingly excavated from the land George Rogers Clark received in exchange for his takeover of British outposts during the Revolutionary War.

The chapel was cleverly created. It was built to resemble a tugboat sitting in stone waves, Druien decorated it with grist mill wheels built from stones imported from France and its windows were high-quality stained glass. But most importantly to Roach, Druien’s pastor father consecrated the structure, making it sacred in her mind.

But Druien eventually sold his pet project. He and his wife reunited, but she wanted him to sell the home, Roach said.

Joseph Biagi bought the property, but it was under his watch that tragedy struck. His stepson set Druien’s creation on fire, damaging the structure beyond repair and leaving it in a hollowed state: uninhabitable for people, but the perfect spot for legends to grow and thrill seekers to visit.

Roach never experienced anything supernatural at Mistletoe Falls. She wanted to fix the property up, but in 1992, her land was thrown into a media whirlwind. Shanda Sharer, a New Albany preteen, was driven to Madison, Indiana, and tortured and murdered by several other teenagers. But before she was taken there, the group stopped at Mistletoe Falls. Nothing tortuous happened to her there, but Roach says that local television stations and newspapers used the ruins on her land to dramatize the story.

“There was nothing to show [in Madison],” Roach said. “Big empty open field. So they exploited my property to the point they trespassed on it.”

The coverage led even more people to the so-called Witches’ Castle — some of whom wanted it gone. Roach said that she received death threats and endured constant vandalism: spray paint on stones and stolen fences.

It wasn’t the harassment that drove Roach from the property. She experienced a “personal tragedy” that led her to sell the land in 1993 to a business called the Collins Company. In 2005, Collins Company transferred ownership of the property to Collins Properties, a company based in South Carolina with an address tied to an amusement machine supplier.

The new owner has seemingly done little to the land. The ruins still stand, and Roach rails against those who would transform the history of Mistletoe Falls into the legend of the Witches’ Castle.

But in 2008, Collins Properties granted permission to Stewart, the paranormal investigator, to scour the land for ghostly activity. And she claims she found some.

Stewart visited the Witches’ Castle for the first time as a teenager. Her friends wanted to see the much-talked-about spot.

Today, Stewart is a medium. She gets messages from the dead for the living, she says. But at the time, she didn’t know she had that ability.

So when a young Stewart turned around in the Witches' Castle, only to catch site of a woman dressed in old-fashioned attire, she was surprised. The lady extended her hand to Stewart, and Stewart cried out to her friends.

Stewart started walking toward the woman, but as she got closer, the person vanished.

Stewart’s friends teased her. They asked her if she was on drugs. But Stewart wasn’t, and when she left the site with her group, she couldn’t stop thinking about the woman. She wanted to go back and find out who she was.

In 2008, Stewart finally got her chance. It was the same year she founded the Paranormal Research & Resource Society. Collins Properties agreed to let her and her group on the property to investigate.

It wasn't long into their visit that something supernatural happened, Stewart said.

Stewart was broadcasting live on internet radio, walking around the property and talking, when she heard the sharp sound of crying.

Stewart tore her earpiece out. At the same time, her now-husband spotted a six-foot tall shadow person and started walking toward it. Stewart began yelling at her partner, telling him not to touch it. But as he got closer, the shadow dissipated.

“It was like somebody turned a fan on,” Stewart said.

Later, Stewart found out that the noise was what a fox sounded like.

Stewart and her group returned to the Witches’ Castle several times, recording their experiences there. They used a device called a ghost box to communicate with any spirits that might have been trapped on the property.

The ghost box is really a Radio Shack radio that Stewart uses to scan the airwaves. It lands on different stations, and the words it picks up are often answers to the questions Stewart asks.

Stewart doesn’t believe that ghosts use the words of others to form their responses, but rather, they manipulate the radio’s energy to create their own words. To prove it, Stewart often asks for ghosts to use curse words, which aren’t allowed on-air. They often do, she says.

At the Witches’ Castle, Stewart and her group made recordings that, after listening back, sounded like full sentences.

One conversation Stewart thinks she captured is between two ghosts.

“Do you hear the voices?” one says.

“Yes, trying to get there,” the other replies.

“Punch through the vortex.”

Stewart believes that a second recording is from the mysterious shadow. Using expletives, it tells her to go away, and not to mess with it.

Stewart’s experiences at the Witches’ Castle left her desperate for more information. She wandered through the town of Utica, knocking on doors and seeking people who could talk about the property.

She found an older man, who she says is now dead. The man said he knew the original owners of Mistletoe Falls, and he also had heard of another legend about a murder that had taken place on the property long before Druien bought it.

A note: Stewart has never found any evidence to corroborate the man’s tale, and Baird’s History of Clark County, Indiana, which documents the early days of the area, makes no mention of it, despite describing several accounts of killings between Native Americans and settlers.

The man told Stewart that a young boy had once lived on the property with his parents. A robber from a nearby area invaded their home, killing the boy’s mother and father.

The boy grew up, and the robber was executed for other crimes. Still consumed with anger, the boy, then a man, abducted seven members of the robber’s family and kept them at his old home.

One day, he hanged them all in the trees of Mistletoe Falls. Afterward, he shot himself.

Stewart believes that the seven souls of his victims are trapped at the Witches’ Castle, and that the orphaned boy is the shadow person, turned evil by his obsession for revenge.

Despite her experiences at the Witches’ Castle, or Mistletoe Falls, Stewart is like Roach. She doesn’t think that the property is sacred, but she does believe that those seeking to trespass on it are in the wrong. She doesn’t understand why people would vandalize it. And she’s also sad to see it sit unused.

“Take the land and do something with it,” she said. Turn it into an overlook or maybe a park, she suggests.

Because the area may or not be haunted, but both Stewart and Roach agree that it is pretty.