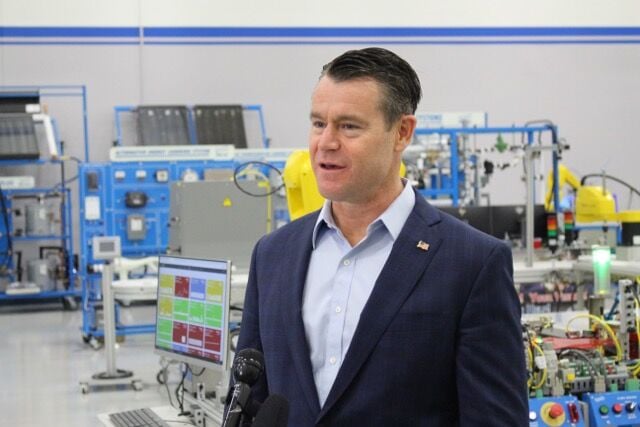 Indiana Sen. Todd Young toured Amatrol, Inc. Wednesday. He talked about how the company’s services are necessary to help keep the U.S. competitive in the world tech market. 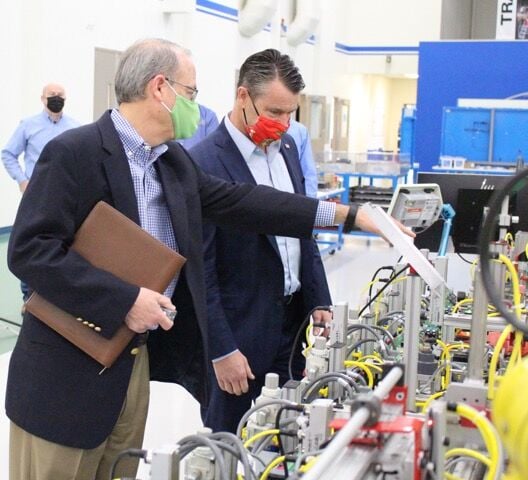 Indiana Sen. Todd Young toured Amatrol, Inc. Wednesday. He talked about how the company’s services are necessary to help keep the U.S. competitive in the world tech market.

JEFFERSONVILLE — Indiana Sen. Todd Young toured the internationally-renowned technological training company Amatrol, Inc. Wednesday in Jeffersonville, which he called “a place where people can adapt to the economy of the future.”

The company, founded in 1978, focuses on the design, development and manufacture of technical training systems and interactive online learning programs used across the globe. Its products and services help train employees in fields including manufacturing, oil and gas and packaging.

Young said the company is a good piece in place to help support the U.S. lead in technology, which is outlined in the Endless Frontier Act, bipartisan legislation unveiled in 2020 by Young, Senate majority leader Chuck Schumer, D-New York, and U.S. Reps. Mike Gallagher, R-Wisconsin and Ro Khanna, D-California.

The legislation would provide for a major overhaul to the National Science Foundation, starting with changing the name to the National Science and Technology Foundation. The foundation’s two deputy directors would oversee distribution of $100 billion over five years to reinvigorate U.S. leadership in major technologies, with another $10 billion over five years to establish 10 regional hubs and spur competition in tech advancement in the states.

Research would be funded in areas including artificial intelligence and machine learning; quantum computing and information systems and robotics, automation and advanced manufacturing.

Young said he was glad to be able to see firsthand the work that’s done at Amatrol and learn about its dedication to the training and retraining of information technology workers. The company, based in Jeffersonville, has around 220 employees at various levels. About 80% of Amatrol’s services are with education and include working with local high schools and colleges and trade schools, as well as facilities internationally.

The other 20% is working with global companies such as Amazon or GE.

“This is a site where manufacturing occurs — a lot of very sophisticated manufacturing — but it’s also a place where people can adapt to the economy of the future,” Young said after a tour of the facility.

Paul Perkins, president of Amatrol, said the company is looking ahead to implementing programs necessary for the advancements in smart technology, machine technology, data analytics and smart devices. This includes smart automation making its way more and more into home systems such as heating and air-conditioning.

“You can look at anything on an app about your home system,” he said. “So we’re actually developing new products in that area to expand it. Interactive multimedia learning, virtual reality, augmented reality are some new areas that we’re doing development in, and I think we’ll see new products here in the area soon.”

Young said the business fits well with a focus he has on strengthening U.S. leadership in cutting-edge, 21st Century technologies, including “everything from robotics to artificial intelligence to material science and advanced manufacturing. Amatrol will help train many of these workers on these new machines and these new technologies so that they can earn higher wages and enjoy a higher standard of living.”

He added that the legislative investment to furthering U.S. technological advancements is also “so that the United States can outcompete, out-innovate China. And, make sure that as China invests hundreds of billions, even trillions of dollars in these technology fields, the United States continues to have the best possible technology.

The Special Olympics prepares for the Borden Polar Plunge at Deam Lake in February. And, the New Albany head basket ball coach achieves his 600th win.